Politics and science are at loggerheads over the question of global warming. The reality is, imminent global cooling is a greater threat to humankind! 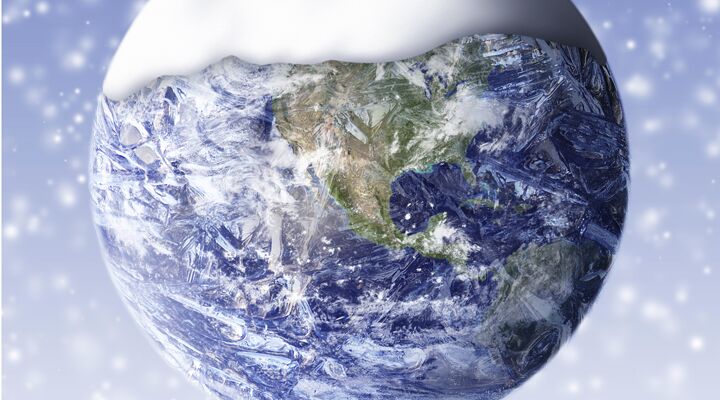 Politics and science are at loggerheads over the question of global warming. The reality is, imminent global cooling is a greater threat to humankind!

Though arguments rage over the issue of climate change, only one side is getting the lion’s share of the publicity. The global warmists win hands down on that score. The realists’ argument is plainly not fashionable. It does not win votes, it does not win business, and it’s certainly not appealing to the mass media!

That the Earth’s climate is undergoing change is without question. As to its reasons and its history, they are the nubs of the arguments posed by both the short-term pro-global warming pundits and those who take a longer view.

Believe it or not, in the not-too-distant future, this Earth is in for a big freeze—guaranteed! But it will not be due to any of the long-term cyclical changes that periodically contribute to either a rise or fall in the Earth’s temperature. This freeze will, indeed, be brought on by the hand of man! More on that later.

Take away the intense politics surrounding the global warming debate. Take away the self-interest groups, business interests, legal, bureaucratic and mass media influences that all seek to make a buck out of driving public hysteria over the fads and fashions of the age.

Scientists all agree that the greatest single driver of Earth’s climate is the sun, the source of our Earth’s energy. Only 160 years have elapsed since the end of the Little Ice Age. It was the onset of the Little Ice Age in the 12th century that drove the Viking residents of Greenland from their previously lush pastures on that large island to settle south in warmer climes. During the Little Ice Age, the evidence tells us that glaciers expanded, threatening many a mountain village with destruction. Since 1850, with the end of that cooling cycle—well before the Industrial Age began to add its pollutants to Earth’s atmosphere—the world’s ice packs have been receding.

The problem with the global warmists is that the theories of their politicized pseudo-science do not match the more exact science of those responsible for accurate measurement of global temperatures.

Ocean temperatures are these days measured by 3,000 automated Argos buoys deployed in the seas. These buoys present a challenge to global warmers. “The Argos buoys have disappointed the global warm-mongers in that they have failed to detect any signs of imminent climate change. As Dr. Josh Willis, who works for nasa in its Jet Propulsion Laboratory, noted in an interview with National Public Radio, ‘there has been a very slight cooling’ over the buoys’ five years of observation, but that drop was ‘not anything really significant.’ Certainly not enough to shut down the Gulf Stream” (Brookesnews.com, March 31).

Added to this challenge to the global warming theorists is the evidence produced by nasa’s eight weather satellites. “In contrast to some 7,000 land-based stations, they take more than 300,000 temperature readings daily over the surface of the Earth. In 30 years of operation, the satellites have recorded a warming trend of just 0.14 degrees Celsius—well within the range of normal variations” (ibid.).

In a widely publicized—and criticized—interview with npr, Michael Griffin, the administrator of nasa, in response to a question regarding the legitimacy of spending money on space projects rather than concentrating efforts on attending to global warming, stated, “I have no doubt that … a trend of global warming exists. I am not sure that it is fair to say that it is a problem we must wrestle with. To assume that it is a problem is to assume that the state of Earth’s climate today is the optimal climate, the best climate that we could have or ever have had and that we need to take steps to make sure that it doesn’t change. First of all, I don’t think it’s within the power of human beings to assure that the climate does not change, as millions of years of history have shown, and second of all, I guess I would ask which human beings—where and when—are to be accorded the privilege of deciding that this particular climate that we have right here today, right now is the best climate for all other human beings. I think that’s a rather arrogant position for people to take” (May 31, 2007).

Mr. Griffin highlighted that leftists, who tend to be thick within the ranks of the greens and global warmists—most of whom are avid evolutionists who deny the reality of a Creator—generally have no compunction about playing god in efforts to impose their will on the masses.

Suddenly, in the general absence of common sense prevalent in today’s society, the whole global warming nonsense has become a religion, and a very dangerous religion at that.

Food riots in various parts of the world are highlighting the ludicrous nature of government policies that have taken traditional food crops out of the food chain in efforts to create so-called green fuels.

The carbon credits fiasco is proving quite a scam for corporatists whose sole interest, far from benefiting global climate, tends to be an increase in corporate profits.

Politicians who find difficulty in gaining consensus between political parties on issues of vital importance are suddenly finding common ground on the global warming issue. One prime example was Germany’s Chancellor Angela Merkel. When faced with great divisions within the European Union on a range of issues during her leadership of last year’s EU summit, she cleverly played the global warming card, raising that issue to the top of the summit agenda. Predictably, all parties fell fashionably in line behind her on this one single issue. By thus achieving consensus on what the media has seized upon as an issue of vital global importance, Merkel was able to snatch victory out of the jaws of what may well have otherwise been billed as a debacle.

Not only that, the German chancellor can now strut her global EU warming stuff on the world stage, greatly enhancing her country’s prestige in the great ongoing global warming debate—a sure winner when it comes to attracting the attention of the global media!

But there is a cost to such politicking. Governments are imposing crushing tax burdens on industries and individuals in efforts to “solve” this illusory problem. As one common-sense commentator, British political economist Rodney Atkinson, wrote of Britain’s “climate change” levies, “Those levies in the UK have raised energy costs by at least 6 percent, which (together with other government disasters like fuel taxation and the failure of the EU gas market) has contributed to a crisis of energy poverty among millions of British households (when 10 percent or more of income is spent on fuel bills)” (www.ukconservatism.freeuk.com, April 24). He cited one government-commissioned consultant who estimated that efforts to comply with an EU renewable-energy mandate would have a lifetime _‚_259 billion price tag. “This is a scandalous waste of human resources,” he wrote, “and all based on the myths of mmgw[man-made global warming].”

This is a problem of global proportions. Already many economies are reeling from the cumulative effects of the global credit binge, plus the escalation of energy costs and the flow-on effects of rising costs on staple foods. It seems crazy for governments to be adding to their own and others’ mounting financial crises by feeding the fire with policies that continue to escalate the price of anything that needs manufactured heat, light or motorized energy to produce it.

On top of these costs are the millions of dollars in taxpayers’ money going toward research intended to prove the global warming theory. “Little or no government funding has been made available to those who have questioned mmgw,” Atkinson continued. “There has been massive politicization of science by mmgw fanatics in governments. Those bent on acquiring greater power for supranational organizations have sought to create public concern—regardless of the truth. Some have let their political and ideological intentions out of the bag!”

He then quoted Christine Stewart, a former Canadian environment minister, as saying, “No matter if the science is all phony, there are collateral environmental benefits …. [C]limate change provides the greatest chance to bring about justice and equality in the world.”

Atkinson concluded, “There is no greater danger to mankind than those politically motivated global power seekers who use scare tactics to acquire control over the masses and supranational constitutional control over free nations. The quality of politicians in the rich Western democracies is now so poor that groups of scientists and businessmen and ideologically motivated world government enthusiasts can easily manipulate them. Climate change seemed to them a gift from heaven—literally!”

This commentator calls this man-made global warming craze a “modern equivalent of medieval religious hegemony” that “terrified the ignorant and uneducated into submission. The new enslavement may be reliant on the new gods of politically perverted science, but the effects of its myth-making and global costs are no less terrifying than the Inquisition.”

The Truth About Global Cooling

Now to the reality of an imminent, truly man-made, global cooling phenomenon.

It is a fact of history that never has a weapon of war been manufactured without an intention to use it. We live in a terribly destabilized and destabilizing world. Nuclear weaponry has been trafficked all over the world. Pip-squeak nations vie with the great global powers to establish their own nuclear weapons programs. The world lives in fear of a madman triggering nuclear warfare. Only quite recently, Israel wiped out a nuclear weapons manufacturing establishment in Syria.

There are prophecies in your Bible that indicate, far from global warming being a threat to mankind, nuclear winter is a real prospect for the future (Matthew 24:20-22).

That’s the problem that ought to be of greatest concern to us today.

Yet, to our great detriment, due to a real poverty of true leadership within our Western democracies today, we can expect little progress toward preventing such a catastrophe. This deficit of leadership is also prophesied in your Bible (Isaiah 3:1-4).

Yet, thank God, this “modern equivalent of medieval religious hegemony” will be short-lived. In fact, its very presence on this globe is a harbinger of better, far, far better times to come!

As our editor in chief wrote following the 9/11 terrorist attack, “But realize also the positive side of this—there is a voice out there warning our people. … Though it comes with a lot of bad news—so much so that the land will eventually not be able to bear our words (Amos 7:10)—it also comes with the greatest news mankind has ever heard” (November 2001).

What is that news? Read it for yourself in Revelation 1:7: “Behold, he cometh with clouds; and every eye shall see him, and they also which pierced him ….”

That’s the real hope, and the only hope, for a future free of the enslavement of minds to such lies as the great global warming hoax!