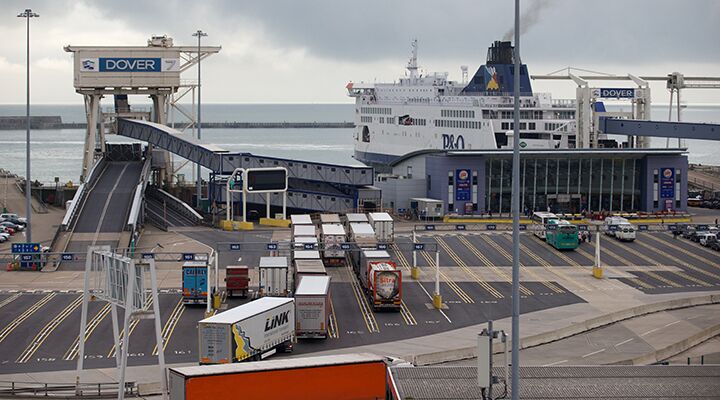 Signs that Britain will give up Dover

From the April 2010 Trumpet Print Edition

The headline was eye-popping: “White Cliffs of Dover to be sold to the French to help reduce government’s debt” (February 8). Shame on the Daily Mail, it was also misleading.

Turns out the famous cliffs aren’t for sale. But the Port of Dover is under discussion.

After a public outcry, however, Prime Minister Gordon Brown swiftly distanced himself from the idea. “There will be no forced privatization of Dover under [the] Labor [Party],” he said publicly two days after the Mail’s report.

But is that the end of the story? Not even close.

The Gateway to England

The moat separating fortress England from the European continent has always been its most crucial natural defense. The English Channel has been the site of several spectacular victories for Britain—battles in which different outcomes would have radically altered history.

Dover, “the gateway of England,” is the island nation’s closest point to Europe. It is separated from Calais, France, by a mere 21 miles of churning seawater only 150 feet deep. It has thus been the first point of attack for—and first line of defense against—repeated invasions. Julius Caesar tried to land at Dover in Rome’s assault in 55 b.c. Several French forces targeted the port city in the 13th century, as did Napoleon and Hitler.

The town proudly bears the scars of its warring past, relics that silently testify of its indomitability through ages and epochs. The imposing millennium-old Dover Castle is aptly called “the lock and key to the kingdom.” Fortifications remain from Roman times, from the Normans, from King Henry viii, from Queen Elizabeth i, from the Napoleonic wars, from two world wars—constructed by giants of history who recognized Dover’s uncommon value over the centuries. Its cliffs hide a massive maze of underground tunnels and soldiers’ barracks.

In the 18th and 19th centuries, the town was an enormous garrison bristling with armaments to thwart French attacks. During the Great War, it became “Fortress Dover,” one of Britain’s most crucial military centers, withstanding several enemy aerial assaults; it hosted warships that protected the channel and welcomed soldiers coming home from battle on the Continent. In World War ii it received over 200,000 of the evacuees from Dunkirk, a miraculous operation directed from one of its underground tunnels. Time after time, Dover has earned its reputation as a symbol of British wartime bravery.

But Britain has changed. To more and more of its people, the nation’s remarkable history is not a source of pride, but of shame. They couldn’t care less about symbolic value. And the idea that Britain might one day need to defend itself again seems alarmist, even preposterous.

How committed is Britain’s government to holding on to Dover, really?

Prime Minister Brown promised “no forced privatization under Labor.” The catch is, Dover port officials aren’t being forced to privatize—they are requesting it. The Dover Harbor Board wants a $645 million expansion of the facility to maintain its status as the biggest freight and passenger ferry port in all of Europe. Because of public borrowing constraints, the only way it can get the money is from private investors. On January 27, the board officially asked the British government for permission to privatize.

Is it far-fetched to think the government will end up approving the request? If it does, this would merely be the latest in a series of British ports being sold to overseas ownership. The United Kingdom has privatized most of its ports industry since 1991, particularly in more recent years. And nearly all the buyers have been foreigners.

This is the result of Britain’s desperate need for cash, its undying belief in the virtues of open markets, and its naive faith in the goodwill of the foreigners gaining control over the gates in and out of the country.

Immediately after the Ports Act of 1991, the UK’s largest container port, Felixstowe, was gobbled up by Hong Kong corporation Hutchison Whampoa, the company that now owns the Panama Canal. Hutchison bought 75 percent of the port immediately and completed the process, to 100 percent ownership, in 1994. This marked the beginning of a significant sell-off of Britain’s major ports, a dramatic change for what was once the world’s dominant trade power.

PD Ports, which operates several UK ports and logistics centers, was sold to an Australian investment fund in 2005. Associated British Ports, which operates 21 UK ports and manages a quarter of the UK’s sea-borne trade, was snatched by a foreign consortium led by Goldman Sachs in 2006. The same year, one of the world’s largest shipping companies, p&o—the giant Peninsular and Oriental Steam Navigation Company, which was founded in the early 19th century—became a subsidiary of Dubai Ports World, owned by the Dubai government in the United Arab Emirates. The Humber Sea Terminal was also taken over by a Belgian company that year. The UK’s third-largest port, Teesport, became owned by a Canadian firm last November.

Ninety-five percent of the UK’s international trade flows through its commercial seaports. The bulk of this traffic now passes through ports privately owned by foreigners.

Dover is one of the few British ports—and is the largest—still owned by the government. In other words, it’s something of an anomaly. The trend suggests it is bound to end up the same way all these other major ports have: in foreign hands. For Prime Minister Brown to act as though such a move would be unthinkable is posturing.

The truth is, Brown says he wants to cut Britain’s budget deficit in half within four years. One step toward that goal is a privatization plan he unveiled last autumn—amounting to the sale of $25 billion in government assets and property over the next two years. Among the potential prizes exciting interest among investors are the Channel Tunnel Rail Link, the Dartford River Crossing toll bridge, the Royal Mint, air-traffic services operator nats, the government’s oil pipeline system, and the government’s 33 percent stake in uranium processor Urenco. Quite a list.

Oh yes—and the Port of Dover. This may not be “forced privatization,” but Reuters reported that the government did ask Dover and its other 50 non-profit “trust ports” to submit privatization plans by April. So, clearly, the interests of London and the Dover Harbor Board are aligning. The port is certain to leave government hands at some point, after which feasibly any offshore firm—even a French one—could buy it.

Such a vast sell-off of valuables is quite unprecedented for a government. But the UK has made itself uniquely vulnerable to it. Yes, its nasty economic woes have placed it in deep need of overseas cash, which it has used to finance its record trade deficits. But even more disturbing is the complete lack of concern over protecting the integrity of Britain’s strategic national interests—let alone preserving Britain’s cultural identity.

In strategically important industry after industry, Britain has been selling its corporate crown jewels to the highest bidder. As a result, its airports, like its seaports, have gone to offshore ownership. Many of its power utility companies, and its largest water utility, are foreign-owned. The power station construction arm of the government-owned nuclear power manufacturer is now held by a Japanese corporation. The nation’s automotive sector has been taken over—as have many of its industrial manufacturers, telecommunications companies and banks—by foreign interests. “It is easier to take over a company here than anywhere else in the world,” Financial Services Secretary Paul Myners told the Guardian last September.

Whereas European governments take pride in domestic ownership of certain sectors and routinely block foreign takeovers, the British government patently celebrates the openness of even its most crucial industries to foreign conquest. This impulse is another ugly manifestation of the cultural shame and historical self-loathing that makes modern Britain so dangerously susceptible to conquest by aggressive foreign cultures and religions.

Many Brits say the foreign investment only makes Britain stronger. Such thinking fails to imagine the prospect of enemy cunning or ruthlessness; in fact it fails to acknowledge even the possibility of an enemy existing.

Of course foreign ownership brings simple realities, such as owners likely having less compunction about shedding jobs during economic difficulty. But there are also grave potentialities in having British ports, communications and energy firms run by overseas directors and shareholders, whose loyalties lie outside the UK.

The words of Hosea belie the trust Britain has placed in offshore ownership. Speaking of Ephraim, whose end-time descendants are situated in the British Isles (a truth proven in our free book The United States and Britain in Prophecy), the prophet wrote, “Ephraim, he hath mixed himself among the people …. Strangers [or foreigners] have devoured his strength, and he knoweth it not …” (Hosea 7:8-9). Time will show that the UK’s faith is misplaced. Britain has yet to realize it, but by auctioning off its strategic assets it has rendered itself peculiarly defenseless and susceptible to foreign aggression.

Another, even earlier prophecy spells out how it will happen. For disobedience to His ways, God warned the ancient nation of Israel—and its modern-day national descendants, of which Britain is one—of oppression by aliens. “The stranger that is within thee shall get up above thee very high; and thou shalt come down very low,” He said, “and he shall besiege thee inall thy gates throughout all thy land, which the Lord thy God hath given thee” (Deuteronomy 28:43, 52).

In The United States and Britain in Prophecy, Herbert W. Armstrong wrote of how these “gates” included the various sea gates controlled by Britain (and America) at the height of its power—gates that would be subsequently lost and used as weapons to choke off trade routes. Another probable realization of this curse has become vividly clear. Notice: This Israelitish people is prophesied to be besieged in all its gates throughout all its land. Even now, “strangers” control virtually all the gates in and out of the island nation of Britain!

For now, Dover—“the gateway of England,” “the lock and key of the kingdom,” the enduring symbol of Britain’s independence and strength—remains in government hands.

Don’t expect it to stay so for long. It, like all the other gates the British have so casually surrendered, is bound to feature in a crushing lockdown—a foreign besiegement—that will drive Britain to its knees.The United States and Britain in Prophecy gives far more detail on this prophecy and what else is ahead for the once Great Britain.