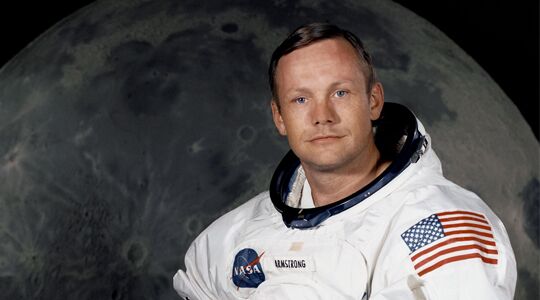 I recently watched a movie titled The Dish. It was about the U.S. sending Neil Armstrong and Buzz Aldrin to the moon in 1969. NASA needed two radio telescopes to track their flight and to return television pictures of the moon walk. One was located in California and the other in Parkes, Australia—one in each hemisphere.

The telescope in Australia was the greatest receiving dish in the world.

The movie was built around Parkes’ part in the moon walk. It gave insight into man’s incredibly great hope, which most people still fail to see.

The moon walk was “science’s chance to be daring,” according to the lead character in the movie. And indeed it was. It captured the imagination of the world. Roughly 600 million people watched from around the Earth. According to the movie, “For one priceless moment all people on Earth are united.”

Never has the Earth been more divided than in modern times. Yet all mankind was united in that brief but inspiring moment. And it gives us an insight into how all humanity will soon be united. Isaiah said, “Lift up your eyes on high, and behold who hath created these things” (Isaiah 40:26).

Before men can be truly inspired, they must lift up their eyes. Our little Earth is like a grain of sand on a vast beach. And we know virtually nothing about that beach—the mind-staggering universe!

According to your Bible, the universe is there for mankind to finish by making it breathtakingly beautiful. But first, we must beautify the Earth in every way.

For one fleeting moment, 600 million people lifted up their eyes and were united in the excitement of that science project. But men and women quickly returned to their daily toil and evil ways. They forgot about the moon walk—and its awesome implications!

If you watched television footage of the moon walk in 1969, the pictures came from the dish in Parkes, Australia. And Australia made this inspiring movie (with only a few offensive words).

America made no such movie. They were not inspired enough to do so. But they should have been—or perhaps enough to have made a very inspiring documentary.

I think it is to our shame that Australia had to make the movie. And all they did was receive the pictures of the moon walk, under nasa’s direction. But those men operating the dish kept reminding themselves of how amazing and mind-boggling their science project was!

Prior to the expedition, the lead character said that the “one big question we don’t know is if we can go there.”

That question was answered.

One character in the movie said that such a science project “makes our spirits soar.” And in these dangerous and trying times, we need our spirits uplifted. It changes us into better human beings.

The universe is there for a mind-dazzling purpose. The moon walk should have led us to understand more deeply why it is there!

Mankind will soon walk on all those planets in the universe, if we can “set [our] affection on things above, not on things on the earth” (Colossians 3:2).

That vision will one day cause mankind to understand their incredible human potential. The human family will become deeply united.

No matter how terrifying circumstances upon this Earth become, this awe-inspiring hope still awaits us.

For one brief moment, mankind lifted up their eyes. But we should do this every day. If we do that properly, it “makes our spirits soar”—daily! (Write for our free booklet The Royal Book of Revelation.)

The lead character also said, “Failure is never as frightening as regret.” For fear, and other reasons, men won’t listen to God’s inspiring message today. And many of them are going to look back with some regret for all eternity.

We are involved in a work that truly “makes our spirits soar”—far more than just viewing Neil Armstrong walking on the moon. You need to understand why. This magazine will guide you into that work.