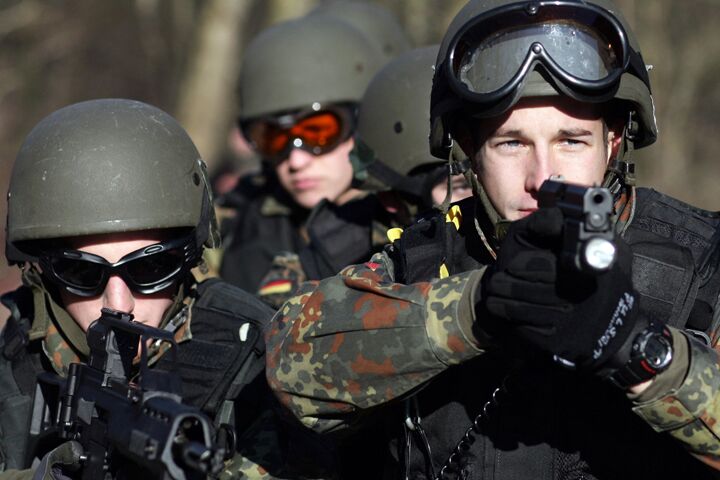 The German military is involved in yet another theater in the war against terrorism—another small but important step in a grand strategy.

The German military has opened a new front in its war on terror. Berlin is now building up its coast guard and training police in Yemen as part of the United States’ intensified anti-terrorism measures there, German-Foreign-Policy.com reports.

While the U.S. has deployed Special Forces to Yemen and is directing bombing raids by the Yemeni military against al Qaeda, Berlin has long had military advisers with the Yemeni military. The German Navy, which operates off the coast of Yemen, is also involved in Germany’s anti-terror efforts there.

Germany already has a considerable presence in the Middle East. It maintains the third-largest contingent of troops in Afghanistan, after the U.S. and Britain. Its navy patrols the coast of Lebanon and the gulfs of Aden and Oman. The German military is also training Iraqi police forces in the uae.

Long-time Trumpet readers will not be surprised just how involved the German military is in the Middle East. Germany is interested in the region on many levels.

By deploying its navy in the gulfs of Aden and Oman and stationing troops in the surrounding countries, Germany also ensures it can play a role in any future conflict in the region from which Europe derives 40 percent of its oil supplies.

Historically, Germany has also seen itself as the defender of Europe—and of its spiritual mother, the Catholic Church—from Islamic encroachment. Since the Holy Roman Empire failed to take back the Holy Land from the Muslims in the bloody Crusades a millennium ago, German-dominated Europe and the Vatican have been looking for ways to regain medieval-scope influence in the area.

With the establishment of the EU’s diplomatic service under the Lisbon Treaty at the start of 2010, the Holy Roman Empire is back, in the form of a German-dominated European Union. A German pope is working to unify that empire more tightly under the Catholic religion. He is using Europe’s biggest threat, the spread of Islam, as a means of hastening that unification under Catholicism.

The numerous German military deployments in the Middle East show how seriously Germany takes the threat of radical Islam. Bible prophecies show how these two forces, the German-led EU and the Catholic Church, will combine to form a new Holy Roman Empire that will launch one final crusade—the bloodiest of all.

The Yemen deployment, one of 12 military missions German troops are currently involved in, is another step toward the fulfillment of those prophecies. Under such names as Operation Enduring Freedom and International Security Assistance Force, these operations are the perfect cover for Germany to train its military and gain practical experience. This is another reason for Germany to send “advisers” and military aid to Yemen.

The world has changed a lot since Franklin Roosevelt, Winston Churchill and Joseph Stalin signed a document in February 1945 outlining the joint U.S.-British-Soviet policy on Germany, in which they declared: “It is our inflexible purpose to destroy German militarism and Nazism and to ensure that Germany will never again be able to disturb the peace of the world. … [O]nly when Nazism and militarism have been extirpated will there be hope for a decent life for Germans and a place for them in the community of nations.”

Sixty-five years later, the U.S. now encourages German militarism as it looks to Germany as a partner in its war against terror and its fight against piracy. The U.S. ambassador to Germany even went as far as to say recently that Germany is now America’s most important ally.

Germany’s military operations so far may only be small, but they help train a core number of troops who can then lead future engagements. Remember, Germany used the 100,000 military officers it was limited to after World War i to prepare its assault in World War ii. Germany only needs a small number of trained troops to speed its revival into a top-class war machine.

Germany has found a new place in the community of nations, one in which German militarism is now promoted by the West. The U.S. claims it needs a stronger Germany. Ironically, it is the German people themselves who at this time are the least enthusiastic about this new role; the German government received a firestorm of criticism for the Kunduz bombing in Afghanistan. Nevertheless, the government is working to change the minds of the people to accept the stronger role for Germany’s military that its allies are calling for.

In a speech given last November at the Center for Strategic and International Studies in Washington, d.c., German Defense Minister Baron Karl-Theodor zu Guttenberg explained why he broke the German taboo by referring to Germany’s involvement in Afghanistan as “war” (emphasis mine):

What is now still exceptional—German military deployments—needs to become more common and needs to become thus more widely accepted, and this was one of the reasons why I, to the surprise of some in Germany, tried to find a new language a couple of weeks ago when it came to the explanation and the descriptions for our military deployments, to find a language which is blunt, which is clear and which tries to describe what I think is reality.

Guttenberg gave the German Bundeswehr greater legitimacy in waging a real ground war for the first time since the Battle of Berlin in 1945. If the world—and Germans—can get used to that, Germany can do it more often. The change in language has already won over the hearts of the German military, and now Guttenberg is working on changing the hearts of his fellow countrymen and ensuring the U.S. gets the militarily strong ally it seeks.

Indeed, German military operations are becoming more common, with Yemen the latest. Every time a new hot zone lights up, you can be sure Germany will seek to become involved. The numbers are small for all of the operations Germany is currently involved in, but this is how Germany has historically set itself up for conquest.

Hindsight makes it clear how Berlin positioned itself for World Wars i and ii. Under the leadership of Otto von Bismarck and later Adolf Hitler, Germany took small, subtle steps toward its goal, often using deceitful language to catch its enemies off guard. In hindsight, the steps Hitler took toward war are obvious. In 1936, he occupied the demilitarized Rhineland, breaking two treaties. In 1938, he bloodlessly conquered Austria. The same year, he convinced Britain and France to give Germany Czechoslovakia’s Sudeten territory. In 1939, he formed a pact with the Soviet Union and that same year bullied the rest of Czechoslovakia into coming under German “protection.”

Only after Germany’s bloody invasion of Poland in 1939 did Britain and France finally wake up to what Hitler was doing all along, and by then it was almost too late. The United States remained asleep for years.

Otto von Bismarck did much the same before World War i. This cunning diplomat unified Germany under Berlin’s dominance, destroying the balance of power that kept Europe in relative peace after the Napoleonic Wars.

Much pre-World War i history focuses on two wars. In the Franco-Prussian War of 1864, Germany united under a Prussian king, destroyed the balance of power in Europe and established itself as the dominant power. The 1866 Austro-Prussian War led to the northern German states unifying under Prussia’s leadership and excluding Austria from German affairs.

What is often overlooked in this progression of Germany’s rise to power is the Danish-Prussian War. This successful war Prussia waged against Denmark was the first war that upset the balance of power in Europe, tipping the scales in Germany’s favor.

The war was fought over two small territories known as Schleswig-Holstein. After four centuries of joint control between Prussia and Denmark, the rule over the territory was thrown into confusion after the Danish king died. Bismarck, minister-president of Prussia, seized the opportunity to take complete control of the territory. He legitimized the naked power grab by using the rhetoric of nationalism and self-determination, successfully preventing Britain from stopping Prussia’s seizure of the territory as it had done previously in 1848.

By doing so, Prussia was finally in a powerful enough position to strip Austria of its leadership of Germany and start the Austro-Prussian War.

The reality is that German militarism of the sort that Roosevelt and Churchill hoped in 1945 would never come back can be traced back to a war fought over two small territories more than 70 years earlier.

Small engagements and subtle use of language matters!

Just as it was hard for the world to see in the 1930s and the late 1800s, it may be hard to see today, but Germany is undergoing another military revival. This revival can be traced back 65 years to the end of World War ii when the Nazis went underground and America rebuilt the German economy.

Right now, the revival is in a legitimization phase, much like during the time of Bismarck, with the German government employing brilliant diplomacy and crafty language to remake the German military’s image as an army that fights to bring peace. It is a revival that our predecessors shed much blood to keep from ever happening again.

Interestingly, it is now being led by a defense minister who is a member of Germany’s royal line and married to a descendant of Bismarck. This is history repeating itself, and it has all been prophesied in your Bible.

If you want to know in advance how Germany will revive its military and embark on a warpath even more violent than Hitler’s World War ii, request our free booklet Germany and the Holy Roman Empire. It will show how Germany’s war on terror will progress from war zones in powerless nations like Yemen and Afghanistan to something far greater than this world has ever seen.