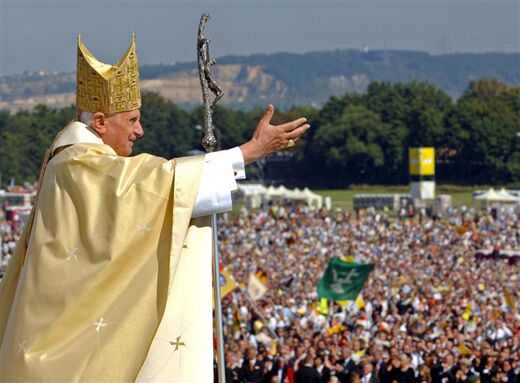 Pope Benedict’s visit last week to Bavaria clarified the pontiff’s future direction on matters destined to have a powerful effect on religion and the global political order.

To the casual observer, they were a litany of homilies from a well-intentioned, aging religious leader. To the careful observer of history and to any student of the lifetime machinations of Joseph Ratzinger’s clerical career, however, they spell out an agenda that will soon propel this pope onto center stage in matters of religion and foreign policy.

As one long-time Ratzinger watcher observed, “Pope Benedict has an extraordinary gift for expressing complex ideas in simple ways, and although I’ve been reading and enjoying his work for years, I don’t think I’ve ever seen anything quite like the series of homilies and speeches he has given this week” (Phil Lawler, editor, Catholic World News, September 12).

Upon perusing the media reports on Benedict’s visit to his home state of Bavaria this week, one has to agree with Mr. Lawler. Reading between the lines of the various homilies and speeches, and also the reports from his audiences with German hierarchy, this pope has used what must have been an emotional and stirring visit to the heartland of Roman Catholicism in his dear Fatherland to declare his stance on the major issues with which he intends to carve his name in history.

Whether it be ecumenism, pan-Islamism, the traditional connection between Germany and Rome, religion versus secularism, the need for Europe to return to its Roman Catholic roots, the juxtaposition between the Vatican’s view of Christ and that of the virgin Mary, or be it politics in general, the pope covered it all in just six days visiting Bavaria. It was his most concentrated series of public addresses of real consequence in the whole of this pope’s reign thus far.

Yet one had to look for the spice peppered throughout Benedict’s public dissertations to detect much of this. As Joerg Beyer of the Ecumenical Network group observed, “Benedict had shed the confrontational approach he had when he was the Vatican’s doctrinal watchdog. ‘Contrary to his style at the Congregation for the Doctrine of the Faith … he now phrases things in a very clever way to avoid unnecessary friction’” (Reuters, September 14).

This pope is revealing himself progressively as a man for all seasons. Though he did indeed address some issues purely by allusion, others he addressed quite confrontationally, principally his pet theme of adjuring Europe to return to its religious roots and, most particularly, the burning issue of Islamic extremism.

Intriguingly, Benedict chose to address the quite separate and distinct challenges that secular rationalism and Islamism pose to the church in one powerful speech he delivered at the University of Regensburg. “Speaking to an audience of scientists and scholars, at the university where he himself once taught theology, the holy father argued that Christianity welcomes intellectual inquiry and always reveres the truth” (Catholic World News, September 12). This has been a consistent theme in Ratzinger’s writings.

But what is fascinating is how the pope introduced this subject of the dichotomy between reason and faith. He opened his lecture by really going for the Islamic jugular. In his opening remarks, he clearly identified the divide that to his mind separates Islam from Christianity by quoting two documents: first the Koran; then a scholarly argument of the 14th-century emperor of Byzantium, Manuel ii Paleologus, in which he attacked the “holy war” concept of Mohammed.

Thus, rather than come out publicly with a direct papal condemnation of pan-Islamism (the greatest present threat to Roman Catholicism), this calculating pope chose a quote from a well-documented historical occasion, one that came out of the Eastern (Byzantine) Roman Empire—one that was bound to stir Islamic ire.

Speaking on the question of faith versus reason, Benedict stated, “I was reminded of all this recently, when I read the edition by Professor Theodore Khoury (Münster) of part of the dialogue carried on—perhaps in 1391 in the winter barracks near Ankara [Turkey]—by the erudite Byzantine emperor Manuel ii Paleologus and an educated Persian on the subject of Christianity and Islam, and the truth of both” (emphasis mine throughout).

It is important to note here that the pope had already indicated that Christianity—to his mind, Roman Catholicism—“always reveres the truth.” So he really had prepared his audience for what was to follow, the truth about Islam!

In the seventh conversation edited by Professor Khoury, the emperor touches on the theme of the jihad (holy war). The emperor must have known that surah 2, 256 reads: There is no compulsion in religion. … [H]e turns to his interlocutor somewhat brusquely with the central question on the relationship between religion and violence in general, in these words: “Show me just what Mohammed brought that was new, and there you will find things only evil and inhuman, such as his command to spread by the sword the faith he preached.”The emperor goes on to explain in detail the reasons why spreading the faith through violence is something unreasonable. Violence is incompatible with the nature of God and the nature of the soul.God is not pleased by blood, and not acting reasonably is contrary to God’s nature. … Whoever would lead someone to faith needs the ability to speak well and to reason properly, without violence and threats. … To convince a reasonable soul, one does not need a strong arm, or weapons of any kind, or any other means of threatening a person with death.

The decisive statement in this argument against violent conversion is this: not to act in accordance with reason is contrary to God’s nature.

Benedict concluded his nearly 4,000-word speech with a reinforcing, for effect, of that latter statement: “‘Not to act reasonably … is contrary to the nature of God,’ said Manuel ii, according to his Christian understanding of God, in response to his Persian interlocutor. It is … to this breadth of reason, that we invite our partners in the dialogue of cultures.”

That is really throwing down the gauntlet to the Islamists! Reading between the lines, the pope is declaring that Islam is an irrational faith. He would not view Iran’s Mahmoud Ahmadinejad as a rational being! He is clearly inferring that the pope’s god is the only rational one, and that dialogue between Islam and Christianity can only be within the framework of the reasoning and reasonableness of this god of the world’s Christian [Catholic] religionists alone! Surely the pope knew such comments were bound to light the fires of protest in every Islamic country throughout the world!

Think on this. This pope is known for his brilliant intellect. This was a well-thought-out speech, prepared in advance of the event. These remarks about Islamic faith were not off the cuff. They were calculated to get a reaction.

And what a reaction they have received. Stratfor reported September 15,

While Muslim governments are still issuing official complaints against the pope’s comments on Islam, the message of fury is quickly disseminating to the streets. Public demonstrations have already been organized to follow Friday prayers in Kuwait and Saudi Arabia. These protests are likely to spread rapidly across the Islamic world, particularly in Egypt, Pakistan, Iran, Kashmir, Indonesia, the Philippines and Turkey.Coming at a time of heightened feelings of religiosity among Muslims in the lead-up to Ramadan, the pope’s remarks are bound to kick up a massive sandstorm—inspiring fiery speeches during Friday prayers on the U.S.-led “war on terror” being the new Crusade against Islam.

Indeed, the pope’s remarks caused such an uproar across the Muslim world—with effigies of the pope being burned during demonstrations in India; Pakistan’s parliament passing a resolution condemning the pope’s statements; demands for a retraction coming from Muslim groups in all sorts of countries including Iran, Egypt and even the UK—that the pope yesterday offered an apology, of sorts. “I am deeply sorry for the reactions in some countries to a few passages of my address … which were considered offensive to the sensibility of Muslims,” Benedict said from his summer residence at Castel Gandolfo outside Rome. As Deutsche Welle observed, the pope still stopped short of retracting his remarks.

Why would this pope, this German pope, choose this moment—in this, his own home state of Bavaria, the very heartland of Catholicism in Middle Europe—to draw his verbal sword against Islam?

Reflect on the nature of the Germanic peoples. They hate disorder. They are expert at creating a crisis then initiating a solution, as that inveterate watcher of Germany Rodney Atkinson has observed.

The pope knows that if Rome is to return to its former glory, given the present disordered state of the world, he needs urgently to unite his over 1 billion faithful who have suffered for decades from the impact of divisive secular thinking on their religion. He knows the best way to do this is to unite Catholics at their historic cultural base, the European continent! He knows that Islam poses the greatest threat to Catholicism in Europe. He sees this as his greatest cause—that he has been chosen for this moment.

What better way to unite Europe and return it to its former imperial days of glory than to provide people with a single common cause that overrides all else and counteracts all tendencies for division? So, in his own very Germanic way, Benedict, this Bavarian pope, has simply lit the touch tape to an already smoldering issue of concern to all Europeans, the threat of Islamic jihad.

In so doing, he has sparked the crisis that will, inevitably, lead to the eighth, and final, great Crusade against its old Islamic foe.

Remember these prescient words of the Trumpet’s editor in chief, written over eight years ago: “Most people think the crusades are a thing of the past—over forever. But they are wrong. There is going to be a final crusade, and it is going to be the bloodiest one of all! … Any child should understand that the fruits of the ‘holy wars’ have been diabolical! There is no excuse for America and Britain not knowing the truth. God has been sending His message in power for over 60 years! They have rejected it repeatedly. That is why they now must suffer so intensely. Finally, God will get their attention and lead them to peace, full joy and abundance” (Philadelphia Trumpet,August 1998).