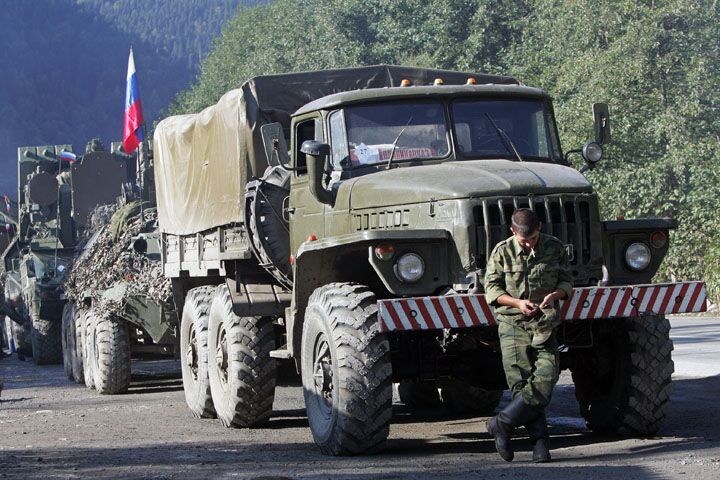 The European Union’s spin machine is working overtime with its recent report on the Georgia war. The 1,150-page EU-sponsored study, presented to senior EU diplomats and the Russian and Georgian ambassadors to the Union on September 30, concludes that Georgia started the 2008 war, not Russia. This report is further evidence that a deal was likely struck between Germany and Russia over Georgia and Eastern Europe.

The report took a team of 20 legal and military experts, led by Swiss diplomat Heidi Tagliavini, nine months to complete.

Tagliavini’s report blamed Georgia for starting the war by illegally attacking the town of Tskhinvali: “There is the question of whether the use of force by Georgia in South Ossetia, beginning with the shelling of Tskhinvali during the night of 7/8 August, was justifiable under international law. It was not,” the study says.

The report said Georgia’s use of rocket launchers and heavy artillery in the assault was not a necessary or proportionate response to attacks by South Ossetian separatists.

That is, of course, how Russia sees it, whose envoys to the EU and nato interpreted the report’s findings as a vindication of Moscow’s action.

Western politicians “will have to make their apologies to Russia for heaping so much dirt on it,” said Russia’s ambassador to nato, Dmitry Rogozin.

Russian MP Konstantin Zatulin said, “It cuts the ground from under the feet of those who want to portray the conflict as Moscow’s plot against democratic Georgia.”

This report gives Russia exactly what it wants—legitimization of its influence over former Soviet states.

The Georgia invasion itself was a calculated blood affair to test the West’s willpower in Eastern Europe and the former Soviet Union. Russia is eager to step up its world-power status, and in order to do this it is seeking to regain control over the territory it held during the Cold War.

But this can only happen as the West allows it.

Lithuanian Foreign Minister Vyguadas Usackas said in response to the EU report, “If the international community had stepped in earlier and provided integration prospects for Georgia the war could have been avoided.” Usackas was specifically referring to the EU and nato’s refusal to extend membership to Georgia.

It is no surprise that the Lithuanian foreign minister is speaking out against the report. Nations such as Lithuania, Ukraine, Estonia and Latvia were all once ruled by Russia in the Soviet Union and host large communities of disgruntled ethnic Russians.

These countries have the most to lose if Russia’s invasion is legitimized by Europe, because this increases the chances Russia will pull the same stunt on them. The same elements that caused the Georgia war exist in these Eastern European nations.

Unfortunately for these countries, the rest of Europe—especially Germany, which is the real power behind the EU—remains silent, and Russia’s experiment has proven to be a complete success.

There is no doubt more than meets the eye behind what appears to be Europe’s appeasement of a resurgent Russia. Trumpet editor in chief Gerald Flurry wrote this about the Georgia war in October 2008:

I believe Germany may well have been complicit in Russia’s plan to attack Georgia! If Russia formed an agreement with Germany over the Georgia situation, then Russia would know the only possible other nation it would have to be concerned about is the U.S. And Russia knew that America was too weak to do anything about it!

The EU-sponsored report gives further evidence of the possibility of such a deal. Even more illuminating is the fact that this report was commissioned by none other than former German Foreign Minister Frank-Walter Steinmeier, shortly after the fighting ended.

Steinmeier, foreign minister of the most important nation in the EU, Germany, spoke out against Georgia’s nato membership bid. Did German leaders do a deal that allowed Russia to gobble up Georgia, in order to ensure the continual flow of energy into Germany from Russia? If so, is it any wonder that the EU’s report is critical of Georgia?

Russia not only seeks to regain its former sphere of influence, but legitimacy in doing so.

This legitimacy gives it the international recognition necessary to become a major world power again, and makes it impossible for the former Soviet states to resist. They are too weak to stand up to Russia without the support of the U.S. or Europe.

Placating Russia will of course lead to a more aggressive Russia. The Trumpetbelieves any deal between Germany and Russia will lead to more war:

The presence of a deal between these two nations is not a sign of peace. Like the Molotov-Ribbentrop pact, and so many others before it, it is a sign of exactly the opposite. Both of these nations are looking to secure their shared border—so they can pursue their imperialistic aims elsewhere! It is a precursor to war!

International observers may balk at the idea, but just as it has happened before in history, Bible prophecy says it will happen again! If you want to learn more about the significance behind this EU report and the Georgia war, read our free booklet Russia and China in Prophecy. It will show you why the Trumpet can make these bold claims.