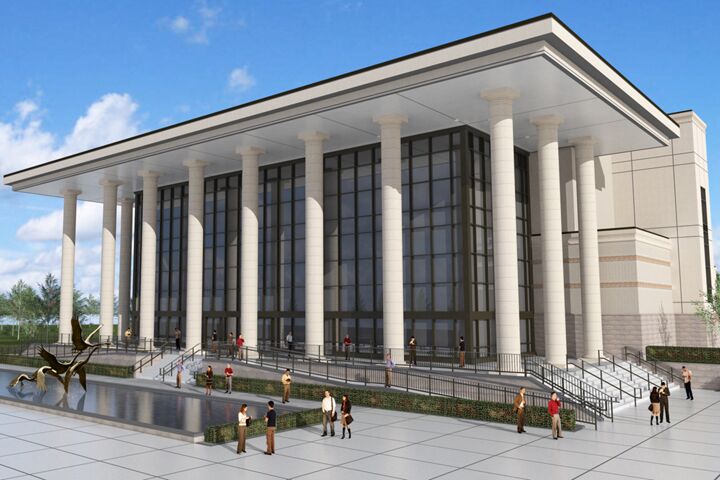 Inside the Trumpet offices, staff members scrutinize world news as daily headlines continue to fulfill Bible prophecy. But they are also excitedly watching another inspiring development—right outside their windows. Less than 100 yards from the Trumpet administration building in Edmond, Oklahoma, stands a staggering sight. It amazes visitors as they enter the campus and stops staff members in their tracks as they walk out the office doors.

Across the parking lot stands the building’s stately frontispiece stacked with 12 mighty, 48-foot pillars, behind which girders, ductwork, conduits, pipes, brick, glass, stone and concrete are transforming into an elegant concert hall, the crowning jewel of the campus.

The capitals of these 12 iconic columns, almost complete as this issue goes to press, support an overhanging roof that shelters a grand lobby, to be encased in five-story-high glass walls, the frames for which professional glaziers have already installed. Ironworkers and other laborers have completed the structure of the lobby and the hallways that flank the auditorium, and are now preparing the site for glass, sheetrock and carpet installers and the artisans who will insert the final elegant finishes for the building’s 44,775 square feet: Crema Marfil and Emperador marble from Spain, caramel onyx from Iran, and American cherry wood.

The shimmering jewels of the building are also being prepared for completion and transport to the lobby. Three diamond-shaped chandeliers, up to 12 feet wide and weighing 4,800 pounds, will hang from the ceiling, each trimmed with thousands of pieces of the finest crystal in the world: Swarovski Strass. Below, two 7-foot crystal candelabra, originally commissioned by the shah of Iran, will frame a caramel onyx wall, on which the building’s plaque will be affixed.

Past this dazzling display, through two sets of double doors, workmen are transforming the scene into the warm heart of Armstrong Auditorium. Here, architects and acoustical engineers have created what will be a rich concert experience with ideal volume-to-seat ratio and a reverberation time of two seconds. This ratio will exceed those of Amsterdam’s Concertgebouw, Boston’s Symphony Hall, and Vienna’s Musikverein, the three world standards used for acoustic quality.

Offering performers their choice between two of the finest-grade pianos is standard among fine concert halls. The Philadelphia Church of God—which sponsors the Trumpet, Armstrong Auditorium and the Armstrong International Cultural Foundation—already owns one 1983 Model D concert grand Steinway piano, an artifact from the acclaimed Ambassador Auditorium in Pasadena, California. The church will purchase its second Steinway on November 24, when two of its musicians will travel to Hamburg, Germany, to select the exact piano for delivery by the end of December.

December will mark the homestretch for the contractors, laborers, craftsmen, consultants, engineers, architects and other workers to see their work through to completion for Armstrong Auditorium’s dedication and inaugural concert. The inaugural 2010 season begins February 14, with the Band of Irish Guards and the Royal Regiment of Scotland. The King’s Singers will perform two days later. The season continues with the Canadian Brass, pianist André Watts, mezzo-soprano Frederica von Stade and bass Samuel Ramey, and the Romeros Guitar Quartet. It will conclude with a performance of Mendelssohn’s Elijah featuring a full professional orchestra and the Herbert W. Armstrong College Choral Union.

Greeting concertgoers as they stream through what will be a beautifully landscaped mall into Armstrong Auditorium will be another restored treasure from Ambassador College, Swans in Flight. Herbert W. Armstrong originally commissioned this striking 12-by-15-by-25-foot sculpture in 1968 from the great English sculptor Sir David Wynne. The pcg has purchased Swans in Flight from Ambassador’s campus in Big Sandy, Texas, and is currently refurbishing it in Norman, Oklahoma.

Why would the Trumpet and the Philadelphia Church of God invest such time and resources into this $18 million project? Because of this: As the Trumpet spreads God’s critical message of warning, it also spreads a message of hope.

Armstrong Auditorium embodies that hope. Guests to the campus’s crown jewel will enjoy rich environs where people try their best to live God’s happy, law-abiding, dynamic way of life. Visitors will come to Armstrong to share in the best of God’s creation: the human body and mind expressing the art, finesse, emotion, and zeal of life in a pure, uplifting way: fine music. Together, performers and listeners will have the opportunity not just to read about, but to celebrate the excitement, the humor, the contentment, the insight and the joy of seeing and striving to live God’s way.

This tiny, work-in-progress microcosm of sharing God’s creation and way of life is just the beginning. The Bible prophesies of a fabulous hope ahead of the conflicts and woes of today’s evil world. A better, a happier, a most wonderful world is coming! Armstrong Auditorium is a place to shout out that hope. Armstrong Auditorium will be just what its founder, Gerald Flurry, has called it: the first building of the wonderful World Tomorrow.