An inspiring makeover in Kenya that illuminates the future. 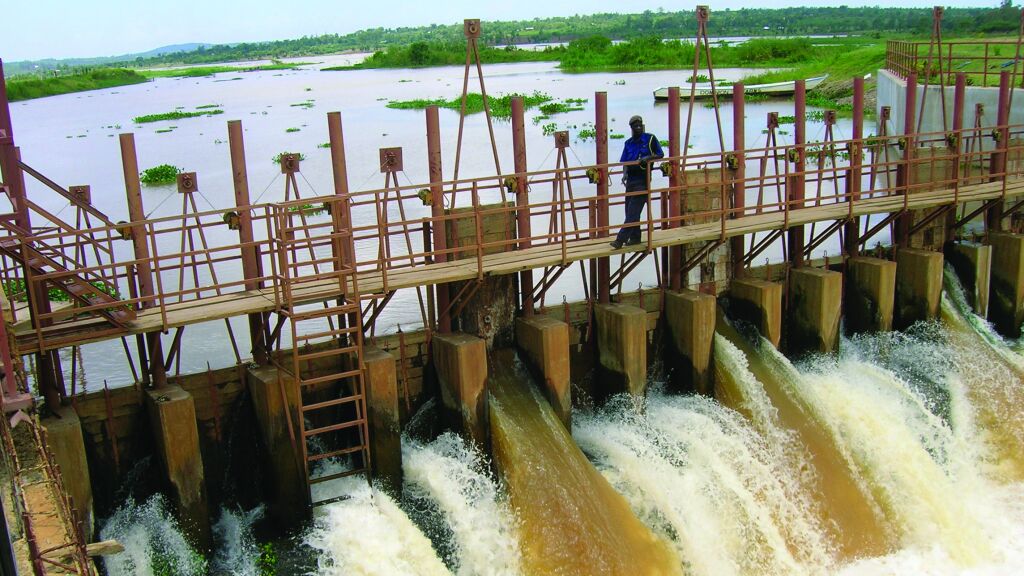 An inspiring makeover in Kenya that illuminates the future.

Some of the Bible’s most beautiful passages are its prophecies of what the world will look like after Jesus Christ returns. Deserts blossoming as the rose. Wastelands transformed into farmlands. Agricultural plenty. Universal prosperity.

Our weary world, rife with poverty and decay, cries out for this transformation.

On a small, abandoned chunk of Africa, you’ll find a bustling project that isn’t waiting for the Second Coming.

Six years ago, in the delta of the Yala River were 17,000 acres that Kenya’s government had tried and failed to cultivate. Much of the soil lay under 3 feet of diseased water. In the districts around the swamp, 85 percent of the people survived on less than 50 cents a day.

Today, over a third of that land is a thriving rice and fish farm, and 20 more acres are reclaimed each day. Seven hundred Kenyans work there, and the farm’s production has enriched over 50,000 more locals besides; the districts’ poverty rate has dropped to 64 percent.

Such success certainly evokes those millennial prophecies. But the individuals driving the Dominion Farms project have no illusions about whether God’s Kingdom is here yet.

There have been physical challenges—like carving a miles-long channel, 30 feet deep and 150 feet wide, in order to redirect a river into a dead lake. There have been the frustrations of trying to procure equipment and supplies in a remote wilderness.

The most imposing hurdle, however, Mr. Burgess summarizes in a single word: corruption. “Everyone in the land is out for something,” the Guthrie, Oklahoma, resident says. Though he’s faced plenty of adversity during his 30 years of founding and running multimillion-dollar businesses in Canada and the United States, working in Kenya has tried his resolve like nothing else.

But Dominion Farms, out of principle, has consistently refused to oblige them. “We won’t pay them off. You fight like mad. You take it to the television stations. You pray,” Burgess says. “Put enough light on things and let the truth out, and it always works.” He cites one battle—where Kenya’s commissioner of customs demanded $80,000 “duty” fees to allow the import of three $15,000 jeeps—that dragged on for 14 months. It wasn’t until the commissioner died in a freakish single-car wreck that the vehicles were released.

The countryside is full of garden-variety thieves, too. “Everything has to be guarded,” says Mr. Burgess. Leave a vehicle outside overnight, he contends, and it will be completely stripped by sun-up. That is why Dominion has 60 security officers patrolling the grounds—and even they aren’t immune to being bribed, or taken advantage of by greedy family members. These are sad realities when doing business in a country where, Burgess laments, “From the beginning, as children, they’re taught to take everything they can get.”

Making matters even more difficult, Kenya is also in the throes of a full-out political crisis bordering on civil war. Last year, when post-election protests descended into tribal violence that claimed a thousand lives and created over half a million refugees, the farm was forced to shut down for a time. “The rice mill operator and the field manager were both Kikuyu men and would have been killed if they returned,” Mr. Burgess wrote on his blog. “Only a skeleton crew of mechanics remained near the farm. Crops needed attending with nobody to do the work and none of the skilled people there to help.” With the airports closed, the U.S.-based staff had to coach the few who remained on how to maintain basic operations—over the phone.

Under these conditions, the depravity of human nature grew even more starkly apparent. Costs for fuel rose to $20 a gallon on the black market—and, Burgess says, it quickly became clear “who had moral character and who didn’t. Some of our best employees became thieves.” To this day, Dominion Farms has to employ a full-time clerk specifically to measure and track every drop of fuel.

That is just one of countless workarounds the staff has devised in order to keep the farm growing. The headaches would have driven most people to give up in exasperation, but Dominion’s personnel have persevered. They are motivated by a sincere desire to build the community, and energized by the improbable success they have already witnessed. “It’s always a battle. There is never anything easy,” says Burgess. “But in the end we always win.”

While Calvin Burgess wants earnestly to help the people of Kenya, he has no interest in handouts. “We won’t just give you things,” he told the locals. “We’re going to add an industry here.” He built his company to provide opportunities and jobs—and simply to reward hard work. Its long list of community projects centers around developing the local infrastructure, improving health and providing education. Next year it will open a year-round vocational-training-oriented camp for local youths and adults.

Mr. Burgess just finished his 65th trip to Kenya since 2003 and now spends about a third of each year at the farm. He says success in these endeavors requires respecting the parts of the Kenyans’ culture that are right, and not shying away from fixing what is clearly broken. “I won’t let African traditions get in the way of what’s right and what needs to be done,” he says frankly. “I’ve now got people willing to give up their traditions and say, Let’s get to work so we can feed ourselves.” Thus, Dominion is training locals not only how to increase crop yields and preserve food, but also how to avoid choices that are enslaving them in poverty and disease. When over half of the people ages 15 to 25 in the region are hiv-positive, Mr. Burgess says by way of example, there is a crying need to educate people robustly—particularly the youth—in a far healthier lifestyle.

Recent years have vividly demonstrated how close our world is to the brink of catastrophic food shortages. But with climates favorable to year-round crop production, Africa is rich in unrealized potential to help prevent them. “Africa should be sending food out—not bringing food in,” says Mr. Burgess. “They can become a breadbasket for much of the world.” He actually hopes to replicate his farm’s model elsewhere in Africa, and already has investors ready to build in Liberia.

Kenya’s political strife is bubbling up again, and the country’s future is uncertain. It threatens to throw another, even greater obstacle into Dominion Farms’ path. But Mr. Burgess remains optimistic by focusing his concern on the things he can control.

And he can take comfort in the fact that, though the Bible’s near-term prognosis for Africa’s future is bleak, it is clear that very soon the whole continent will enjoy the kind of agricultural abundance—and clean living—he is working to bring to life today. Request a free copy of Herbert W. Armstrong’s booklet The Wonderful World Tomorrow—What It Will Be Like to read how the Bible’s beautiful prophetic passages are about to become reality.

At that time, the biggest obstacle to success—human nature—will be gone. Chapter 3 of Mr. Armstrong’s booklet explains how God will accomplish this miracle.

After his experiences, Calvin Burgess is sure to be excited about that development most of all.