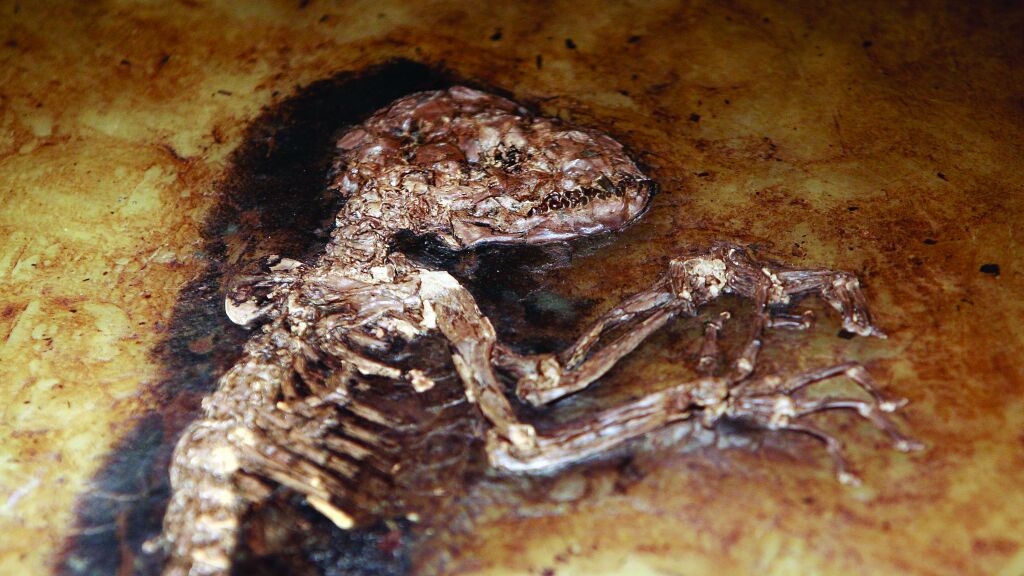 The “missing link” is the holy grail of evolutionists. If scientists can find the remains of a “transition” species, they will definitively prove evolution, the thinking goes. Now that missing link has been found! That is, if we are to believe the reports.

At the end of May, mass media started hyperventilating over the discovery of Ida, a fossilized monkey skeleton hailed as the “missing link” in human evolution. Fox News said the fossil “made waves” among scientists and non-scientists alike. The Guardian called it “one of the most significant primate fossil finds ever made.” Google made the fossil image a part of its homepage logo. The Wall Street Journal dubbed Ida a possible “landmark discovery”—potentially a common ancestor of all later monkeys, apes—and humans.

Yes, the media went bananas over the fossilized remains that scientists claim closely resemble a lemur (a small, tree-dwelling primate found in Madagascar) in some respects but an ape in others. Some experts called the skeleton the “eighth wonder of the world.” Others said the impact upon paleontology would be comparable to an “asteroid falling down to Earth.” At one point, the euphoria was so intense that the discovery was compared to the moon landing and the Kennedy assassination.

Even New York Mayor Michael Bloomberg got carried away at the star-studded unveiling, calling the preserved specimen an “astonishing breakthrough.”

But before you take the scientists’ and the media’s word for it and hang portraits of apes over the family fireplace, you might want to look a little closer.

Sorry, evolutionists: For all the big headlines and grand proclamations, this “missing link” is another—if beautifully preserved—fraud, another in a long line of distinguished frauds.

The fanfare surrounding Ida is reminiscent of another famous fossil: the Piltdown man. The Piltdown fossil was a series of skull fragments discovered in the early 1900s that included a human-like skull, orangutan-like jaw, and chimpanzee-like teeth. Scientists gave it the name Eoanthropus dawsoni.

A familiar degree of great excitement accompanied the discovery of this fossil, as it purported to demonstrate a transition species between man and “lower primates.” The great majority of the scientific community jumped on this discovery as proof of evolution and the fossilized missing links that even Charles Darwin was admittedly at a loss to explain. Over 500 essays and scientific papers were written on the subject. Graduate students produced their doctoral theses from studying the fragments.

There was only one problem: The fantastic find was a fake.

The perpetrator combined a 700-year-old human skull, a 500-year-old lower jaw of a Sarawak orangutan and fossilized chimpanzee teeth. He then used chemicals to dye the bones to give the appearance of age.

But here is the point. It took about 40 years for the scientific community to discover the difference between a supposed multimillion-year-old fossil and a modern chimpanzee.

For four decades, the majority of the scientific community accepted the fossil as legitimate fact and proof that modern man was part of an evolutionary chain of species—despite the fact that several credible scientists almost immediately disputed the validity of the find, that there were visible file markings detectable on the teeth, and other incongruities. Textbooks incorporated the discovery, thousands of students were taught the faulty information, and untold millions were unsuspectingly influenced into accepting the belief that people had evolved from monkeys. All from a cobbled-together mess of human, orangutan and chimpanzee parts.

It was not just because of the shoddy “scientific” testing applied to it that the Piltdown hoax worked (although an unbiased and careful examination, using the tools available at the time, would have revealed the hoax), but because the fake fossil neatly satisfied the prevailing preconceived theory of the time. Thus, supposedly unbiased, truth-seeking scientists easily and even willingly overlooked the aspects of the discovery that argued against its validity.

“There’s Almost Nothing to Study”

This is the pitfall that evolutionary enthusiasts repeatedly fall into.

Despite more than 150 years of searching for bones, the fossil record continues to disprove the evolutionary theory. Not a single confirmed transition fossil has been found! According to the evolutionary theory, there should be millions and billions. Animals have been evolving into new species for hundreds of millions of years, the theory goes. Therefore, scientists have reasonably expected to find thousands, or at least hundreds, or maybe 10, fossils of transitionary species. But they can’t find a single one!

Scientists are not trying to honestly provewhether evolution holds true, as they would any other theory. They are desperately, one-sidedly trying to verify evolution.

That is why the supposed Ida discovery (Darwinius masillae) is such a big deal.

“It’s part of our evolution that’s been hidden so far, it’s been hidden because all the other specimens are so incomplete,” said Prof. Jorn Hurum, the scientist who bought the fossil from a private collector who obtained it many years prior. “They are so broken there’s almost nothing to study, and now this wonderful fossil appears, and it makes the story so much easier to tell, so it’s really a dream come true” (emphasis mine throughout).

“The significance of this new find is it has almost every single fragment of bones,” confirmed Tab Rasmussen, an anthropologist at Washington University in St. Louis. “It’s very difficult to find anything besides teeth, a jaw, and bones here and there. This is something that really vaults the whole field forward” (Fox News, May 21).

According to revealingthelink.com, the official website promoting Ida, there is no primate fossil “so well preserved until we get to human burial.”

How condemning. The notion of evolution, accepted by the mainstream scientific community as fact, is largely based on nothing more than a few eroded bone fragments and scattered teeth—garbage evidence. And these are scientists; individuals who supposedly reject anything but the hard, cold facts.

Evolution, it seems, is a theory based upon the evidence of things not seen.

Where Did Ida Come From?

But what about Ida? It is 95 percent complete, and even the contents of its last dinner are visibly preserved in the fossil. Surely, all the hype must indicate that it is good proof of evolution.

Unfortunately for evolutionists, as it turns out, Ida is a fraud too.

One of the co-authors who released the Ida study, Dr. Philip Gingerich, admitted that the team would have preferred to publish in a rigorous scientific journal, but had to settle for an open-source journal. He told the Wall Street Journal, “There was a tv company involved and time pressure. We’ve been pushed to finish the study. It’s not how I like to do science” (May 20).

And then, to even be allowed to publish their ideas in the less-rigorous, free online Public Library of Science One journal, the scientists had to virtually renounce their own claim that Ida was a human ancestor by inserting the statement: “[The species] could represent a stem group from which later anthropoid primates evolved [the line leading to humans], but we are not advocating this here.”

Wow! So, outside of the History Channel (which spent a record amount to purchase the Ida movie rights months earlier), the book promotion, and the high-profile Michael Bloomberg press conference, Ida as a “missing link” isn’t even considered good science.

“It’s Not a Missing Link”

It rings “all sorts of warning bells” when a tv company is dictating the science, notes Prof. Peter Brown, a paleoanthropologist at the University of New England. He says the scientific study did not provide sufficient proof to consider Ida as a human ancestor, or even a primate ancestor: “It’s nice it has fingernails, something we have, as do most primates … but they’ve cherry-picked particular character[istics], and they’ve been criticized [by other scientists] for doing that” (Australian, May 21).

“It’s not a missing link, it’s not even a terribly close relative to monkeys, apes and humans, which is the point they’re trying to make,” said Carnegie Museum of Natural History curator of vertebrate paleontology Chris Beard. “I would be absolutely dumbfounded if it turns out to be a potential ancestor to humans” (Fox News, op. cit.).

Even the scientists—in fact, the majority of scientists, according to Yale University’s Chris Gilbert—don’t believe the Ida fossil is a missing link.

So where does that leave us?

It leaves us with monkey bones. Very beautiful, very complete, fossilized monkey bones, but monkey bones nonetheless. Ida is nothing more than an extinct species of lemur. It’s not the “astounding” “landmark discovery” it was hailed to be.

But this episode does uncover a real discovery: Just how willing evolutionists are—in the scientific and academic communities as well as the media—to close their eyes to the scientific truth.