Queen Elizabeth II ought to have been the first dignitary invited to Normandy on June 6, not the last. 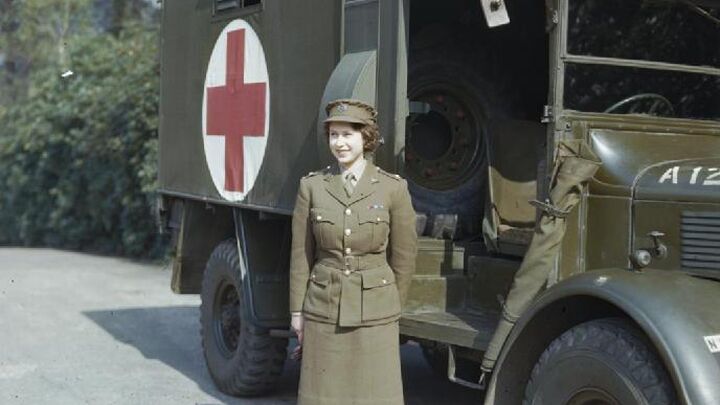 Queen Elizabeth II ought to have been the first dignitary invited to Normandy on June 6, not the last.

The leaders of France, Canada and the United States descended on Normandy on June 6 in a much more peaceful way than the 150,000 Allied soldiers did on that date in 1944. They commemorated the 65th anniversary of D-Day, the Allied invasion of Hitler’s Europe. Eight hundred British veterans of Normandy joined the dignitaries, along with former servicemen from Canada and the United States, a squall of reporters and countless tourists from across the planet.

You would think that someone would have reserved a chair for Britain’s head of state, the 83-year-old matriarch of the indefatigable institution at the heart of Britain’s wartime resilience, herself a survivor and veteran of World War ii.

Queen Elizabeth ii was not on the original list of invitations to the commemoration. So, instead of standing shoulder to shoulder with fellow veterans in Normandy to commemorate the sacrifice and service of friends and family, the Queen would have had to watch Mr. Obama, Mr. Sarkozy and Mr. Brown—none of whom were even conceived until after the war—mark the occasion with rallied empathy via television. Shame.

Ceremonies like this give pause for reflection—in this case, on the sacrifice and courage of the warriors who fought in World War ii; on the character and selflessness of their families who supported them tirelessly, prayerfully, from afar; and on the immense national sacrifice it took for the Allies to finally wrest victory from Hitler.

Frankly, no one can reflect on these things quite like Queen Elizabeth ii.

A Child at War

Shortly after the war commenced in September 1939, it was suggested to King George vi and his wife by concerned authorities that Elizabeth and Margaret, as heirs to the throne, join the children of Britain’s wealthy and be evacuated to the faraway, peaceful shores of Canada. The queen consort’s curt response to this suggestion was patriotism in its purest form: “The children won’t go without me. I won’t leave the King. And the King will never leave.” That settled it. The King and his family would remain at the wheel of the ship.

Elizabeth was a teenager when war erupted, and together with her younger sister she spent most of the war in seclusion at Windsor Castle. They often slept in the dungeons, virtually alone, whenever it was considered too dangerous to sleep upstairs. They may have been safely ensconced within those protective walls, but the girls knew what it felt like to watch parents and loved ones dodge death in service to Britain.

Early in the war, King George and his wife had chosen to remain in London in the hope that their resilient example might embolden a country in the jaws of death. They even decided to continue residing in Buckingham Palace, the seat of royal power and the bull’s-eye of Hitler’s Luftwaffe. The palace was bombed nine times, with two bombs exploding on one occasion less than 80 yards from where the King and Queen were sitting. Meanwhile, King George and his wife weren’t afraid to get their hands dirty, and their children, along with the country, witnessed their parents’ gallant tours through the rubble-strewn streets of London, their courage and resilience rallying their shellshocked people.

In October 1940, when she was just 14 years old, Elizabeth delivered her first radio address, live to Britain and the United States. “Thousands of you in this country have had to leave your homes and be separated from your father and mother,” she told listeners, precisely and empathetically. “My sister Margaret Rose and I feel so much for you, as we know from experience what it means to be away from those we love most of all.” The world was touched. It was early in the war, but American hearts began to long to rescue Britain’s innocent princesses.

The girls learned quickly that despite—and really because of—their position, they too had to sacrifice. Throughout the war, they followed their mother’s example, knitting clothes for soldiers in the Army, Navy and Air Force. When they ran out of material in July 1941, the princesses personally arranged and performed in a concert to raise money to buy wool so they could resume their service. Time after time, the royal heirs sacrificed time and privacy for photos, public addresses and taxing public engagements designed to inspire and motivate the British people.

Elizabeth and her sister learned to be frugal, and willingly gave up royal privileges. Tales still linger of the royal family economizing with clothing coupons, and of how the queen consort would personally alter her own dresses for Elizabeth, and later for Margaret. In 1941, the press released a story about how Elizabeth was allocated 5 shillings a week for pocket money, more than half of which she donated to the war effort.

“This was not just for public consumption,” relays Ben Pimlott in his biography of Elizabeth ii. “When Eleanor Roosevelt visited Buckingham Palace late in 1942, she found adherence to heat, water and food restrictions that was almost a fetish. Broken window panes in her bedroom had been replaced with wood, and her bath had a painted black line above which she was not supposed to run the water.”

Of course, Elizabeth and her sister were royalty and enjoyed advantages during the war that most British children did not have. But those advantages came with weighty responsibility, which the sisters carried admirably, with determination and sacrifice, and without complaint.

As Elizabeth matured, the war demanded she skip the more carefree teenage years and quickly absorb royal responsibilities to the state. She visited hospitals and shipyards, led ceremonies and parades, and performed constitutional duties. By the time she was 18, after years of performing royal functions to help inspire the public, the princess had managed to convince her father and mother to allow her to volunteer in the military. In February 1945, she was registered as No. 230873 Second Subaltern Elizabeth Alexandra Mary Windsor. Trained at the military academy in Aldershot, Elizabeth became a mechanic and a driver in the British Army, rising to the rank of junior commander. Queen Elizabeth ii is the only living head of state who served in uniform during World War ii.

The war touched Elizabeth in a multitude of ways. The young Prince Philip, her husband-to-be, was an officer in the Royal Navy. Her uncle, the Duke of Kent, died in a plane crash while on active service.

When King George vi died in 1952, Winston Churchill delivered a speech in remembrance of his old friend and fighting companion: “There is no doubt that of all the institutions which have grown up among us over the centuries, or sprung into being in our lifetime, the constitutional monarchy is the most deeply founded and dearly cherished by the whole association of our peoples.”

When she became Queen in 1952, Elizabeth embraced this royal legacy of service and sacrifice. “I cannot lead you into battle,” Elizabeth told her people at her coronation. “I do not give you laws or administer justice, but I can do something else. I can give my heart and my devotion to these old islands and to all the peoples of our brotherhood of nations.”

That’s why it’s such a travesty that the Queen was not invited to the commemoration in Normandy. Although Downing Street blamed France for the gaffe, saying it neglected to send an invitation to Buckingham Palace, much of the fault lies with British Prime Minister Gordon Brown. Britain was invited. Mr. Brown simply didn’t pass the invitation on to the Queen—Britain’s head of state—or even think to quiz the French to make sure a seat had been reserved for both himself and Her Majesty.

How could he forget?

Mr. Brown, together with most of Britain’s leaders, no longer understands or cherishes the historic role and responsibility of the monarchy. The snubbing of Queen Elizabeth ii, even if it were accidental, is a sign of the diminishing respect and appreciation among British leaders for the undying sacrifice of the monarchy during World War ii.

Prince Charles attended the D-Day commemorations, thanks to a belated invitation to Buckingham Palace from the French president. But the mentality of Britain’s leaders was clearly exposed. Sliding into the multicultural cesspool, Britain’s leaders are losing sight of the magnificent history of their monarchy, and are turning their backs on Queen Elizabeth ii, Britain’s forgotten veteran.

To learn about the tremendous importance of the British royal family, request a free copy of The Key of David.