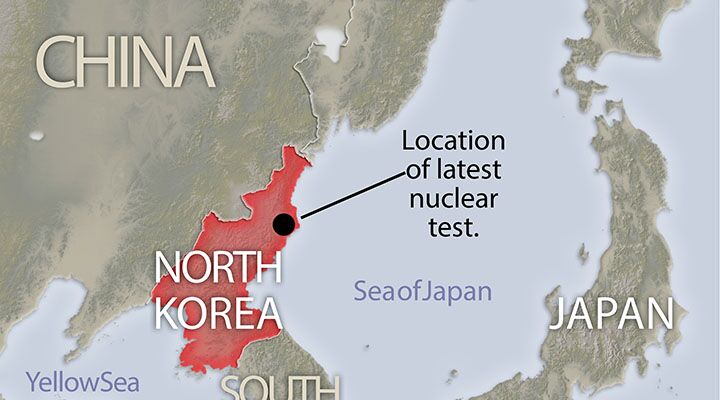 That’s what Kim Jong Il plans to launch using his nuclear weapons should North Korea be provoked. “Our nuclear deterrent will be a strong defensive means … as well as a merciless offensive means to deal a just retaliatory strike to those who touch the country’s dignity and sovereignty even a bit,” said the state-run newspaper Minju Joson on June 9 (emphasis mine throughout).

Pyongyang’s declaration, the first in which it referred to its nuclear arsenal as “offensive” in nature, came as a major aftershock to a region already reeling from North Korea’s slew of nuclear and ballistic missile tests in May. If we believe Pyongyang’s June 9 announcement, North Korea doesn’t just possess nukes—a frightening enough reality. It is ready and willing to use them.

Understandably, America and its allies in Asia are alarmed by Kim Jong Il’s apocalyptic ambitions. Shortly after Pyongyang conducted its nuclear test on May 25, it turned South Korea into a nervous wreck by threatening a “strong military strike,” and saying that its 56-year cease-fire with Seoul no longer applies. Nearby Japan is so alarmed Tokyo is chattering about the need to develop its own nuclear arsenal. Concerns over North Korea’s nuclear belligerence reverberated throughout Asia.

After North Korea detonated its second atomic device, governments heatedly condemned the test. The best Beijing could muster, by contrast, was saying that it “firmly opposed” the act.

It was an awfully weak response. Kim Jong Il’s nuclear device packed a payload equal to the atomic bomb dropped on Hiroshima and was detonated less than 100 miles from the Chinese border. Beijing is closer to North Korea’s nuclear launch sites than Tokyo is, and hundreds of millions of Chinese live well within range of Pyongyang’s short-range missiles. Like South Korea and Japan, China’s entire population of more than 1 billion is within range of North Korea’s long-range Taepodong-2 missile. Moreover, China’s missile interceptor system is more rudimentary than Japan’s.

There is a reason for Beijing’s pathetic and relaxed reaction—one that the rest of the world ignores at its peril.

China has long been North Korea’s staunchest friend. The relationship was forged in adversity at the beginning of the Cold War, when, in 1950, Communist China dispatched soldiers into the Korean Peninsula to fight alongside their North Korean comrades against South Korea and its ally the United States. Beijing has been Pyongyang’s firmest ally ever since, consistently defending it from punishment by America and the international community.

Beijing possesses the tools to wipe out Kim Jong Il in a week. It has more leverage over North Korea than any other state—yet is unwilling to use it. The U.S. has been negotiating with Pyongyang for 15 years under three different administrations. The whole time, China persistently has done its best to dilute UN sanctions and bog down negotiations.

So why does China keep North Korea alive?

The common answer as to why Beijing sustains and defends North Korea is that it fears that the implosion of Kim Jong Il’s regime would create a humanitarian crisis that would see refugees flooding across the Yalu River into China. There’s some truth to that claim. But surely such short-term problems would be minor compared to the long-term advantage of encouraging an economically and politically stable government without ominous nuclear aspirations in Pyongyang.

The reality is more sinister: China’s leaders support Kim Jong Il’s regime because a rogue North Korea serves China’s ambitions, both within the region and in the global arena!

First, the existence of an unpredictable, highly volatile nuclear aspirant is a distraction to China’s competitors in the region. “Apparently, [Chinese] President Hu Jintao finds Kim useful in the short-term for keeping Japan and South Korea off balance,” wrote Chang (ibid.). China employs North Korea in Asia in much the same way Iran employs Hezbollah in Syria and Lebanon: as an instrument to push, pry and distract Western-aligned governments, thereby undermining and countering U.S. interests in Asia.

But the ultimate and most worrying reason Beijing sustains North Korea is that Kim Jong Il’s ideologies and ambitions align perfectly with China’s top global priority: undermining the United States!

The media are awash with reports on China’s attempts to eviscerate the U.S. economy, including its efforts to destabilize the dollar, undermine the American financial system and strengthen the credibility of the International Monetary Fund. Evidence shows that Beijing is expanding its military capacities, especially its navy, and solidifying military and strategic partnerships to counter America. China is competing with the U.S. in space, and reports show it to be undermining U.S. power in cyberspace. It is forging dubious relationships with anti-American regimes in Africa and Latin America, not to mention consistently handicapping America’s diplomatic ventures around the world, particularly in sensitive places like Iran.

If we consider China’s defense of Pyongyang’s nuclear program in light of its open hostility and competition with America, we arrive at a sobering conclusion: China considers Pyongyang a tool with which it can challenge the U.S.

When North Korea confirmed its entrance into the nuclear club in October 2006 by detonating its first nuclear device, Henry Kissinger, Sam Nunn, William Perry and George Shultz wrote a joint article saying that “the world [was] on the precipice of a new and dangerous nuclear era.” “[T]he likelihood that non-state terrorists will get their hands on nuclear weaponry is increasing,” they wrote. “In today’s war waged on world order by terrorists, nuclear weapons are the ultimate means of mass devastation. And non-state terrorist groups with nuclear weapons are conceptually outside the bounds of a deterrent strategy and present difficult new security challenges” (Wall Street Journal, Jan. 4, 2007).

After Pyongyang’s test earlier this year—not to mention the advancement of Iran’s nuclear program and the fact that Pakistan and its nukes could fall into the hands of radical Islamists—can anyone doubt that we have entered a new era of nuclear proliferation?

Evidence suggests that the club of rogue nuclear aspirants is a close-knit group. China clearly supports North Korea’s nuclear program. Strong evidence links the North Korean and Iranian nuclear programs. North Korea’s fingerprints were all over the nuclear facility in Syria bombed by Israel in September 2007. China itself, violating the Nuclear Non-Proliferation Treaty it signed in 1992, helped develop Pakistan’s nukes; by refusing to support America and Europe in combating Iran’s nuclear ambitions, it has proven itself a supporter of Ahmadinejad’s apocalyptic nuclear designs.

We live in an age of nuclear proliferation among rogue terrorist-sponsoring states—and China is supporting and defending the nation in this group with the most advanced rogue nuclear program!

Why isn’t China concerned about Pyongyang’s nukes finding their way into the hands of terrorist organizations? Simple. It knows the nukes won’t explode in Beijing or Shanghai, but in New York City or Los Angeles!

President Barack Obama’s administration, like its predecessors, pretends China is on America’s side on the North Korea issue. When Kim exploded his atomic device in May, Obama immediately dispatched a high-level delegation to Beijing to sit down and hash out a plan to deal with North Korea. It was a fool’s errand, one America has been running for 15 years. Charles Krauthammer warned, “The [Obama] administration is pretending … that China is on our side on this. It’s not. It has no interest in weakening its ally and puppet in Pyongyang. It’s working against us” (Real Clear Politics, April 6).

China has groomed North Korea’s nuclear ambitions from their infancy. It pleases Beijing that Pyongyang’s nukes are pointed not west, but east, at the shores of the United States!

No matter where you live, you must take this new age of nuclear proliferation seriously. Bible prophecies speak of a soon-coming nuclear winter, a time when, as the Prophet Habakkuk warned, there will be widespread destruction of flora and fauna: “the fig tree shall not blossom, neither shall fruit be in the vines; the labour of the olive shall fail, and the fields shall yield no meat; the flock shall be cut off from the fold, and there shall be no herd in the stalls” (Habakkuk 3:17). To learn more about this nuclear holocaust, request our free booklet Habakkuk and read Chapter 3.

In the Olivet prophecy in Matthew 24, Jesus Christ warned that conditions would be so bad in the world immediately prior to His Second Coming that unless He intervened, “there should no flesh be saved.” The only way world conditions could become so dangerous that they threaten all human life is if nuclear bombs are exploding around the world.

North Korea’s nuclear program, and China’s sponsoring of it, is accelerating the fulfillment of this prophecy.

It is not inevitable that you suffer this fate. There is a way to escape the soon-occurring explosion of the nuclear bombs stored in Russia, America, Europe, and those being manufactured now by North Korea and Iran. To find this path of escape, which leads to a future of hope and happiness, sign up now to start taking The Herbert W. Armstrong College Bible Correspondence Course. To learn more about the nuclear future of planet Earth, and what comes after, request our booklet “We Have Had Our Last Chance” and read “The World Will Not End This Way!” in the July issue of the Trumpet. All this literature is free for the asking. See the back cover of this magazine for details.