Nuclear disarmament will not prevent mankind from being annihilated by atomic war. Thankfully, a higher power will. 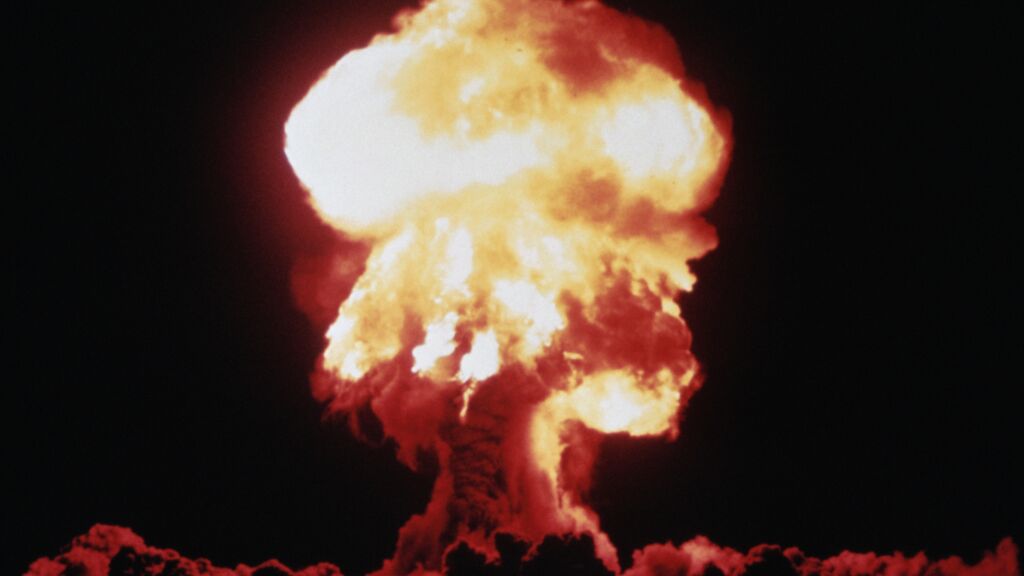 Nuclear disarmament will not prevent mankind from being annihilated by atomic war. Thankfully, a higher power will.

Disarmament is a noble aspiration. But, as Winston Churchill exhorted in 1932, it can never be “attained by mush, slush and gush.”

Throughout the 1930s, the warning howl of Britain’s lone bulldog was mocked and ignored by a government enamored with the virtues of disarmament. That changed in 1939. On September 1, German bombers began razing Polish cities. Hitler’s impeccably organized, well-trained and heavily rearmed army marched into Poland. Meanwhile, Britain was unprepared and grossly under-armed. Disarmament’s shortcomings were painfully obvious.

History shows that Britain’s fixation with disarmament during the ’30s actually dressed the aggressor and stripped the victims. By doing so, it made conflict inevitable!

The lesson is worth remembering.

Speaking before a live audience of 20,000 in Prague on April 5, U.S. President Barack Obama gushed about the “future of nuclear weapons in the 21st century” and America’s “moral responsibility” to “seek the peace and security of a world without nuclear weapons.” He articulated a comprehensive strategy for attaining his noble goal.

Unsurprisingly, the strategy begins with America relinquishing nukes. “First, the United States will take concrete steps toward a world without nuclear weapons,” the president promised. “To put an end to Cold War thinking, we will reduce the role of nuclear weapons in our national security strategy, and urge others to do the same.”

The strategy includes negotiating a new Strategic Arms Reduction Treaty with Russia, aggressively pursuing America’s ratification of the Comprehensive Test Ban Treaty, and spearheading a new treaty to end the production of fissile material for use in nuclear weapons. And these are just first steps. The Obama administration also plans to remodel and strengthen the Nuclear Non-Proliferation Treaty—the 1970 agreement to pursue global nuclear disarmament.

“Clearly, the ‘no nukes’ policy is one close to the president’s heart,” Anne Applebaum observed after the president’s speech. Advancing the nuclear nonproliferation movement was actually one of the few foreign-policy initiatives Barack Obama got firmly behind when he was a senator. It was a central tenet of his foreign-policy platform while campaigning for the presidency.

Mr. Obama’s infatuation with disarmament is similar to that espoused by the appeasers who inhabited 10 Downing Street before World War ii. There is one critical difference: America’s fixation threatens to gift the aggressors with the ultimate instrument of death—nuclear weapons!

Now imagine if each party had nuclear weapons at its disposal. Human extinction comes to mind.

This is the end that current world conditions are barreling toward!

Thankfully, however, this is not how the world will end.

North Korea and Iran were among those assuredly pleased to learn about President Obama’s strategy for relinquishing nuclear weapons. In fact, April 5 was an especially satisfying day for Pyongyang.

Only hours before Mr. Obama’s speech, North Korea had put a satellite into orbit by attaching it to, and then launching, a long-range ballistic missile. Although the success of the exercise is debatable, the launch was certainly a measure of North Korea’s developing ballistic-missile and nuclear programs. The missile is capable of hitting the West Coast of the United States—and it can deliver a nuclear payload.

International response to the missile launch involved little more than condemning statements: The United Nations imposed additional sanctions on three North Korean companies. Nevertheless, Pyongyang’s reaction was fiercely confrontational and unrepentant. Calling the UN Security Council a “tool for the U.S. high-handed and arbitrary practices,” North Korea announced its withdrawal from six-party talks on nuclear disarmament, threatened to conduct a nuclear test, expelled nuclear inspectors from the country, and declared that it would immediately begin reprocessing plutonium at its Yongbyon facility. The country reportedly possesses enough plutonium for six to eight weapons and has produced one rudimentary nuclear device.

According to the New York Times, one North Korean official told the state-run news agency kcna that Pyongyang was prepared to take “additional self-defensive measures,” including “nuclear tests and test-firings of intercontinental ballistic missiles,” unless the Security Council apologized.

Where does a wretched tyrant leading an anthill-size state get the audacity to lambast and even threaten major world powers, including the UN? First, Kim Jong Il clearly doesn’t fear consequences for his actions. Second, he listens to speeches like President Obama’s in Prague, detects weakness and a spirit of capitulation, and decides that to augment his strategic and geopolitical position relative to Washington and the rest of the international community, acquiring nuclear weapons is his best option.

Third, he knows he has the support of others such as Iranian president and co-nuclear-conspirator Mahmoud Ahmadinejad.

The Genie Is Out of the Bottle

It’s no coincidence that Iran launched a missile similar to North Korea’s in February. Experts say Tehran and Pyongyang have long been cooperating on developing missile and nuclear technology.

Speaking before a Senate Foreign Relations Committee hearing in May, New York District Attorney Robert Morgenthau—after months of spearheading financial investigations of Iran during which he spoke with leading nuclear authorities—warned that Iran is “deadly serious” about acquiring nukes. “It is later than a lot of people think,” warned Morgenthau in reference to Iran’s nuclear program. “Frankly some of the people we have consulted are shocked by the sophistication of the equipment they are buying. … It is late in this game and we don’t have a lot of time to stop Iran from developing long-range missiles and nuclear weapons.”

Iran is about to acquire nuclear weapons. North Korea has them already. The fear now is that al Qaeda and other radical terrorist organizations will get hold of them, which will become all the more likely as Pakistan falls to pieces (article, page 7).

As Herbert Armstrong once said, the nuclear “genie” is out of the bottle.

It would be naive to think it can be enticed back into the bottle through eloquent speeches, negotiations and dreams of a nuclear-free world. President Obama’s vision of global nuclear disarmament grossly underestimates human nature, especially the violent ideological ambitions of America’s enemies. As in Britain during the 1930s, his plan weakens those countries prepared to embrace the strategy, and empowers the rogue powers that resist it.

Britain’s policy of disarmament brought temporary peace by giving Germany time to build its military arsenal. America’s nuclear disarmament strategy may do the same as the likes of Iran, North Korea and terrorist organizations take time to build their nuclear arsenals. In a real sense, disarmament will make the detonation of a nuclear bomb inevitable!

In addition to history, the “more sure word” of Bible prophecy tells how successful America’s strategy for nuclear disarmament will be.

As Jesus Christ’s earthly ministry came to a close, He was asked by His disciples, “[W]hat shall be the sign of thy [second] coming, and of the end of the world?”

Sitting on the Mount of Olives, surrounded by His disciples, Jesus answered that question in what is today commonly referred to as the Olivet prophecy, found in Matthew 24. (If you’re interested in Christ’s entire explanation and in proving that He was discussing the times we live in today, request a free copy of our Matthew 24 reprint article.)

Notice what Jesus says in verses 21-22: “For then shall be great tribulation, such as was not since the beginning of the world to this time, no, nor ever shall be. And except those days should be shortened, there should no flesh be saved ….” Christ tells the disciples that His Second Coming will occur at a time when mankind has the ability to destroy all living creatures. It will be a time of tribulation exceedingly worse than any other in history.

Consider more deeply the wording of verse 22: “[E]xcept those days should be shortened, there should no flesh be saved ….” This time of tribulation will be so terrible that, without intervention from a higher power, no flesh will escape death. Mankind has never experienced such a time. Wars have killed tens of millions, famines have wiped out regions, disease epidemics like the Black Death have inflicted catastrophic destruction. But this scripture is speaking of a global catastrophe that threatens all flesh, both animal and human!

Widespread detonation of nuclear and other weapons of mass destruction is the only explanation of how mankind can and will reach this point!

As our booklet The Four Horsemen of the Apocalypse states, “The scale of war Christ prophesied in Matthew 24 and Revelation 6 simply could not have been fulfilled at any other time in man’s history! Humanity has never built or designed weapons that it did not eventually use. Man will find a use for the deadly nuclear weapons and other destructive devices created since World War ii” (emphasis mine). Many other accounts in the Bible also tell us that a future nuclear holocaust is inevitable.

The goal of global nuclear disarmament may be noble, but Jesus Christ says it will fail, and nuclear war will erupt.

If this sounds discouraging, step back and ponder the awe-inspiring event being discussed in these scriptures. Concentrate on the ramifications and hope embedded in the last half of verse 22: “but for the elect’s sake those days shall be shortened.” Jesus Christ promises He will return and intervene to prevent mankind becoming extinct by nuclear war!

He will not allow the world to end this way!

Ultimately, these prophecies are about the return of Jesus Christ to this Earth. Nothing is more promising, more exciting, more filled with hope!

Particularly given the rush of current events on the nuclear front, we cannot afford to take these prophecies lightly. Study Christ’s message in Matthew 24. It’s stunning how events described in that prophecy, written nearly 2,000 years ago, match events currently unfolding in the chaotic world around us. The study of world events together with Bible prophecy is one of the most moving studies you could undertake!

But remember, as you read about the horrific events surrounding Christ’s return: This event is more of a beginning than it is an end. While Christ’s return will bring an end to the age of human government and self-rule, it marks the beginning of the Kingdom of God being opened to all of mankind.

At this time, after saving mankind from extinction, Christ will implement on Earth a comprehensive strategy that will eradicate human nature—thereby guaranteeing global nuclear disarmament forever!

It is imperative that you learn about this new world as you study the end of the one we know today. For the best description of this coming new world, request a free copy of The Wonderful World Tomorrow—What It Will Be Like.