The speech was brilliantly delivered, but it overlooked some vital fundamentals of America’s heritage 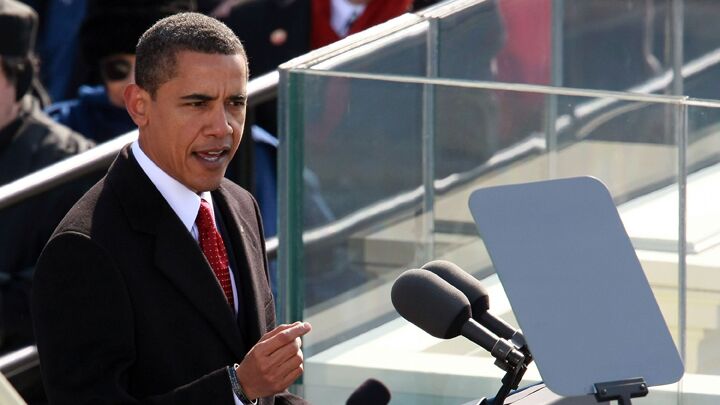 The speech was brilliantly delivered, but it overlooked some vital fundamentals of America’s heritage

President Obama’s inaugural speech was delivered with the eloquence to which we have become accustomed, courtesy of his dominance of the mass media during the run-up to the American elections.

Notwithstanding the 42 percent of the nation that did not vote for him, the president has almost 100 percent backing from those who shape the minds of the nation, the press and mass media. Just as the American media was blanketed ad nauseam with continual repetition of the inaugural speech for days following his inauguration, so we can be sure that the brainwashing industry of the mass media will blitz the airwaves with his ongoing prose during his presidential honeymoon period.

Yet, despite this Obama media frenzy, anyone who failed to see the glaring lack of some of the most vital elements of the American heritage within the new president’s inaugural speech is ignorant of the nation’s origins, its reason for being, its true history, and its inevitable future.

We can accept that Mr. Obama may be quite sincere in his stated intentions. But as Herbert Armstrong declared, one can be genuinely sincere, yet be sincerely wrong!

Any real student of history knows that the pioneers sacrificed to establish a nation built upon the very foundational unit of a sound society, monogamous marriage and sound family relationships. Yet this president espouses as part of his personal political creed the destruction of life in the womb and perverse human relationships such as those condemned by the God whose help he requested at the close of the solemn oath of presidential office (Romans 1:22-25).

Going on to announce to the people that all have the “God-given promise that all are equal, all are free,” the President Obama failed to declare the greatest of all qualifiers for the attainment of God-given freedom and equality: that such blessings are only guaranteed by the God of the Bible to those who obey His divine law!

In respect of our multicultural society, and perhaps giving early warning of our future foreign-policy orientation, it was intriguing to hear President Obama refer to the largest Judeo-Christian nation on Earth by maintaining that America is “a nation of Christians, Muslims, Jews and Hindus,” in that exact order, with the Muslim interposed between the Christian and the Jew, surely a first for any inaugural presidential speech!

Here Mr. Obama is at extreme odds with President Lincoln, who corrected the whole American nation for being “intoxicated with unbroken success” and becoming “too self-sufficient to feel the necessity of redeeming and preserving grace, too proud to pray to the God that made us!” Unlike our new president, Lincoln placed the onus on the people “to humble ourselves before the offended Power, to confess our national sins, and to pray for clemency and forgiveness.”

The orientation of the self-indulgent post-baby-boomer mindset (it is understood that the president’s inaugural speech was largely crafted by Mr. Obama’s 27-year-old chief speech writer) was easily seen in the order in which the president listed the duties of America’s citizenry: “We have duties to ourselves, our nation, and the world.” That, indeed, is a far cry from the order of duties as seen by prior generations of the Anglo-Saxons, raised to see their duty first to God, second to king or commander-in-chief, and third to country. It was taken as a given by better generations than ours that if one fulfilled one’s duties in that order, then we would be automatically fulfilling our duty to ourselves.

As he concluded his inaugural speech, President Obama mentioned that the source of America’s confidence was “the knowledge that God calls on us to shape an uncertain destiny.”

Let us be clear. In the eyes of God, according to His inerrant Word, the destiny of America is assured! There is nothing remotely uncertain about it! In these times which President Obama rightly described in his speech as proceeding “amidst gathering clouds and raging storms,” you need more than ever before to know your nation’s God-rendered destiny!

Read our booklet The United States and Britain in Prophecy for a clear analysis of the history, current state and guaranteed future of your country. That book will place in complete perspective the 44th presidency of the United States of America!