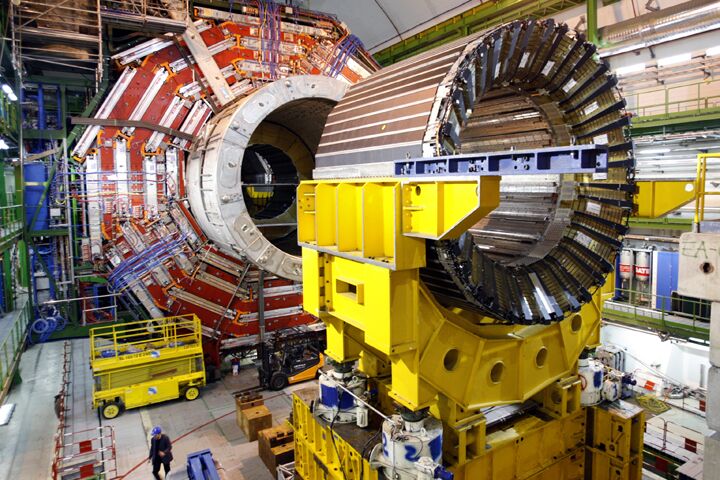 As scientists run their biggest race, the U.S. falls behind Europe for good.

Last year, in our August/September issue, the Trumpet wrote: “The biggest race in science has been on for decades now, but by this time next year, the United States will no longer be a contender. The most expensive, sophisticated machine on Earth will come online in Europe in 2008: a new Large Hadron Collider (lhc) ….”

That time has now come; European scientists have brought the Hadron Collider online and are about to begin looking for the particle that scientists theorize may hold the universe together. Is a European discovery about to revolutionize our understanding of physics? What are the implications for America?

Scientists at the cern nuclear research facility on the border of Switzerland and France are looking for a theoretical particle called the Higgs boson, known as the “God particle” to enthusiasts because its existence would explain why particles have mass.

Whoever finds the Higgs has the Nobel Prize all wrapped up. Until now, much of theoretical physics has been developed from very little hard data. The standard model says the Higgs particle has about 190 times the mass of a proton, but that model remains questionable until the Higgs particle is actually discovered. The lhc promises to facilitate this long-anticipated discovery, and most particle physicists hope for more than a simple confirmation of the standard model. If the Higgs differs from the standard model, or if researchers discover other new particles, a whole new era could dawn for particle physics.

Up until now, the largest accelerator in the world has been the Tevatron, located at Chicago’s Fermilab. But now the Large Hadron Collider is activated, the really big, exciting discoveries will in all likelihood be coming from Europe. (Tevatron will be shut down completely in 2009 or 2010.)

Case in point: On June 13 last year, Tevatron announced the discovery of a new heavy particle, the first to have quarks from all three families of matter. Studying this particle will help scientists better understand how quarks are bound together in protons and neutrons. It was a major discovery—but it wasn’t the Higgs. Now the time the Tevatron has to make science’s most anticipated finding is almost up. With the nearly 25-year-old Tevatron nearing the end of its life cycle, researchers at Fermilab would likely have already found the Higgs if they were going to.

Even if the U.S. were to beat Europe to it and discover the Higgs before the lhc becomes operational, it would be the last major discovery in America in this field of study. The U.S. has lost its leadership role in physics, and the best and the brightest physicists will want to go to the superior facility of cern. Consider our brains drained.

A project of this magnitude always inspires the next generation, so we can expect the next crop of great scientists to come from Europe, not the U.S. The technologies that invariably result from such significant discoveries will emanate from Europe. Think of the impact the space program had in the United States, with an entire generation of young people wanting to become astronauts, and spin-off technologies affecting everything from oil-spill cleanup to golf ball design. Cordless power tools were developed for the Apollo program; smoke detectors and water filtration units in your home use nasa technology; much of our media relies on satellite systems nasa helped develop; many medical advancements—including both cat scans and magnetic resonance imaging (mri)—are a result of the space program. The potential of the European research program is just as high.

And the trend of cutting-edge science moving from the U.S. to Europe won’t stop with a particle accelerator; there are also plans to build a $13 billion experimental fusion reactor in France. In addition, while the U.S. is participating in the new $1.4 billion Herschel Space Observatory, the largest infrared space-based telescope of its kind, it too is a European project—the U.S. is not taking the lead as it once would have.

U.S. scientists don’t see their loss of stature as a problem. “We’re delighted it was so successful and thrilled with the prospect of sharing in this big, new scientific adventure,” Fermilab spokeswoman Judy Jackson told the Associated Press. “What everyone wants is to explore this next energy territory. Where this happens is really immaterial.”

In response to Europe taking the lead in particle physics, U.S. scientists are holding pajama parties to watch the new experts on television. This ongoing loss of leadership in the most important fields of science is just one more symptom of a U.S. superpower at the end of its own life cycle. Europe is ready to fill the void. For more on Europe’s future world status, read “Why You Must Watch Europe.”