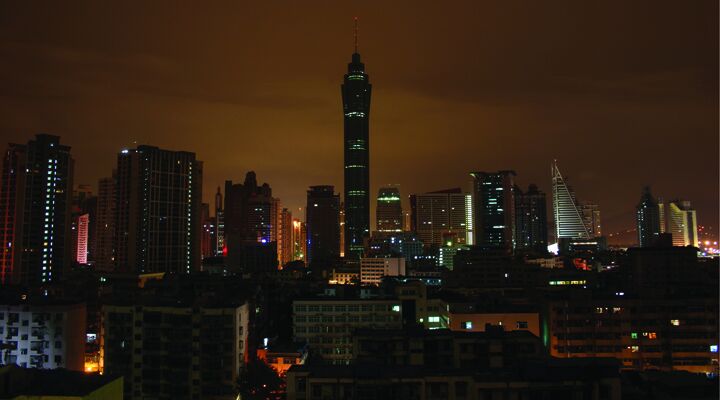 Current headlines confirm the pinpoint accuracy of a 40-year-old prophecy.

From the June-July 2008 Trumpet Print Edition

The 21st century, says Anthony Browne of the Daily Mail, is the Asian century.

This is a staggering turn in world events.

“The global power shift from the West to the East is no longer just a matter of debate confined to learned journals and newspaper columns—it is a reality that is beginning to have a huge impact on our daily lives” (April 11, emphasis ours throughout).

What makes this especially staggering is the fact that it so vividly attests to the pinpoint accuracy of a prophetic warning issued four decades ago by Herbert W. Armstrong.

That’s right: Herbert Armstrong wrote about this massive shift in global power decades before the “debate” even made it into leading journals! “The handwriting is on the wall!” he cried in the 1967 version of The United States and Britain in Prophecy.

Over 40 million copies of Herbert W. Armstrong’s books and booklets were distributed worldwide during the 20th century. His most popular title was The United States and Britain in Prophecy. Six million people requested the book from the mid-1930s to the late 1980s. Mr. Armstrong’s last version of the book was printed in 1980. Here is what he wrote nearly three decades ago about the once-mighty English-speaking nations: “Between them the British and the American peoples had acquired more than two thirds—almost three fourths—of all the cultivated physical resources and wealth of the world. All other nations combined possessed barely more than a fourth. Britannia ruled the waves—and the world’s commerce was carried on by water. The sun never set on British possessions.

“Could the British and American peoples be ignored in prophecies of world conditions that fill a third of the entire Bible—when some 90 percent of all those prophecies pertain to national and international world happenings of our time, now?

“Indeed it is. And yet, precisely as prophesied, Britain’s sun has now set. As these same prophecies that foretold Britain’s greatness revealed far in advance, Britain has already been reduced to a second-rate or third-rate power in the world.

“And the United States? Today America finds herself heir to just about all the international problems and headaches in this post-World War ii, chaotic, violent world. And the United States has won her last war—even little North Vietnam held her at bay. Many other nations sap America’s national strength, ‘and he knoweth it not,’ as God long ago foretold!”

At the outset of the Reagan-Thatcher era, those comments might have seemed like a stretch to some. But no one would call them an exaggeration today!

Anthony Browne’s Daily Mail piece highlighted just what a historic shift in world events is occurring. “[T]he hand _over of global power from the UK to the U.S. was trivial compared to what is happening now,” he wrote.

The Rise of the Rest

Newsweek’s May 12 cover featured a photo taken from behind the Statue of Liberty, next to this headline: “The Post-American World.” Fareed Zakaria wrote, “We are living through the third great power shift in modern history.” The first, he said, was the rise of the West. “The second shift, which took place in the closing years of the 19th century, was the rise of the United States. … For the last 20 years, America’s superpower status in every realm has been largely unchallenged—something that’s never happened before in history, at least since the Roman Empire dominated the known world 2,000 years ago. During this Pax Americana, the global economy has accelerated dramatically. And that expansion is the driver behind the third great power shift of the modern age—the rise of the rest.”

The new world order we’ve grown so comfortable with over the last century, as Browne noted in his column, is nearing its end. This new balance of power features a developing Asian superpower that, only 40 years ago, was an isolated, poverty-stricken nation, barely hovering above Third World status.

Today China is rocketing into the modern world, experiencing a massive industrialization just like America at the turn of the last century and Britain a century before that. Consequently, cities are springing to life all along China’s eastern seaboard.

Each year, close to 8 million rural Chinese trudge to the coasts in search of jobs and a better life. To accommodate these new urban dwellers, China constructs the equivalent of Detroit plus Chicago each year—and has been doing so for about the past decade. As of last year, there were more Chinese with cell phones than there were people in the United States.

The “boom town” of Shenzhen, located cross the bay from Hong Kong on the southern coast of China’s Guangdong Province, typifies this explosive growth. Thirty years ago, Shenzhen was mostly dirt roads with rice paddies, where farmers gazed across chain-link fence at the prosperous British colony. Today this cosmopolitan city of 18 million is twice the size of Los Angeles, and its densely packed skyscrapers rival downtown Manhattan—except that most of Shenzhen’s towers are brand new. Multi-story shopping malls and luxury condominiums line its broad, landscaped boulevards. A burgeoning foreign national community avails itself of Shenzhen’s world-class restaurants and amenities including nearby Mission Hills, the world’s largest golf course, with 216 championship holes. Most of all, though, Shenzhen boasts factories—thousands upon thousands of factories.

But China’s rapid growth is causing some people to worry. And there is good reason, particularly for Americans. After all, China’s growth has largely come at America’s expense.

The Deindustrialization of America

America used to be the world’s factory. China has largely usurped that role.

Following World War ii, America quickly rose to economic dominance. “Made in the U.S.A.”—stamped on exports sent around the world—was synonymous with quality as well as quantity. The U.S. produced just about everything and had need of nothing.

In the 1950s, for example, America manufactured half of all machine tools in the world. Machine tools, such as lathes, milling machines, grinders, stamping machines and the other large, motorized tools used in factories, are the most essential component of a nation’s industrial base. All these were manufactured in America.

The U.S. now makes less than 6 percent of the world’s machine tools, and those found in America are more likely stamped “Made in” some other nation. Similarly, virtually all the hand tools in Wal-Mart and K-Mart are China-stamped—as are most of the clothes, plastic household goods, appliances, electronics and toys—pretty much the whole store.

Although not all of the above imports come solely from China, a large proportion does. For example, according to the Census Bureau, America’s trade deficit with China was $256 billion during 2007, which means that America spent an astounding $256 billion more on Chinese goods than China spent on U.S. goods last year.

Now it is Chinese goods that are sold in markets once dominated by the U.S.

Just a year and a half ago, China surpassed the U.S. to become the world’s second-largest exporter. It was only a short five years ago that America exported more than double the amount of China. And if current trends continue, in another decade China will surpass the United States as the world’s largest economy.

The American Century Has Ended

We need to wake up to the fact that these now-regular reports of our demise are no longer prophecies for the future. They are happening now!

For example, “The desperately weakened American dollar,” Browne wrote, “appears to be on the verge of losing its global dominance, in the same way as sterling lost it a lifetime ago.”

Mr. Armstrong, we should note, told us a lifetime ago this would happen. “You have seen that the U.S. dollar—long thought of as the stablest currency in the world—is in immediate jeopardy of being devalued!” He wrote that in a letter 40 years ago. Today, politicians openly talk about purposefully devaluing the dollar in an attempt to save American manufacturing.

As with Britain a lifetime before us, the sun is now setting on America’s reign as the globe’s economic superpower. Only this time, the transition of global dominance from the U.S. to China is sure to be much more disruptive than the handoff that occurred from Britain. The U.S. was Britain’s offspring, based on the same values and the same language. It, too, was an Anglo-Saxon country, and passing the baton across the Atlantic ensured the continuation of the Anglo-Saxon world order based on democracy, free trade and a belief in human rights, upheld through international institutions that both powers supported.

However, the new world order features a developing Asian superpower that doesn’t play by Anglo-Saxon rules.

We must know where this trend is leading because the stakes are much higher than simply losing some of the comforts and conveniences we have grown accustomed to. The same prophecies that point to the demise of the Anglo-Saxon nations also warn that this world is about to explode! Bible prophecy says a massive Asian power bloc, led by a modernized Russia and China, will dramatically alter the course of human history. This conglomerate of peoples, comprising more than one fourth of the world’s population, will play a lead role in the climactic struggle for world dominance right at the end of mankind’s 6,000 years of self-rule!

Today’s headlines confirm that the day of reckoning is here, to use a phrase Patrick Buchanan chose as the title for his most recent book. “It is the belief of the author and premise of this book,” Buchanan wrote last year, “that America is indeed coming apart, decomposing, and that the likelihood of her survival as one nation through mid-century is improbable—and impossible if America continues on her current course. For we are on a path to national suicide.”

Herbert W. Armstrong, however, wrote about our “day of reckoning” in all his editions of The United States and Britain in Prophecy. In 1980, he wrote, “God warns us through prophecy that our sins are fast increasing. And now the day of reckoning is here! The foreign sword always has attacked us.”

Sobering words indeed—and proclaimed for more than 50 years by Herbert W. Armstrong in The United States and Britain in Prophecy. You owe it to yourself to join 6 million others who read the 20th century’s most important book on Bible prophecy.

If you’ve ever wanted to truly understand why world events continue to worsen—and where these events are ultimately leading—this is your opportunity!