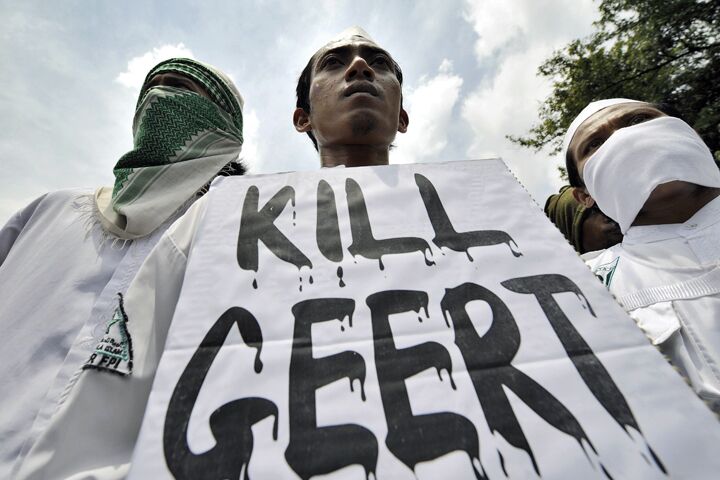 A controversial new movie is stirring violent passions in the Muslim world—and showing that some Europeans are ready to push back.

“I don’t hate Muslims. I hate their book and their ideology.” Geert Wilders is a politician, but he’s not politically correct. While many of his Western contemporaries are bending themselves out of shape finding ways to accommodate increasingly belligerent Islamic ideology, Wilders is bent on showing the world “the real face of Islam,” as he told the Observer.

Head of the Dutch right-wing Party for Freedom, the outspoken Catholic has consistently made headlines with confrontational anti-Islamic rhetoric calling for radical mosques to be shut down, labeling the Koran “an inspiration for murder” and saying that if Mohammed were alive today, he would have him “tarred and feathered as an extremist and deported if he were in Holland.” His latest and shrillest sos save-our-society distress call is called Fitna. And if Muslims didn’t hate Geert before, they do now.

Fitna, an Arabic word that connotes a schism or conflict, is a provocative, if low-budget, 15-minute presentation that links six violence-promoting passages from the Koran with footage of Islamist extremist terror attacks. Flight 175 piercing the South Tower in a stomach-sickening orange explosion of fiery shards; survivors of the initial explosion limply hanging out of windows billowing out choking smoke; the falling man. A horrific clip of a thick, bustling throng of commuters at Atocha disappearing in a violent, blazing concussion. Warped wreckage of trains in Spain and double-decker red buses in London. Theo van Gogh’s stabbed body lying in the street. And worse: Executions; hangings; blasted, burned corpses; amputated bodies being dragged through the street; and ghastly beheadings.

Sprinkled into this gory, homicidal mix are clips of Muslims crying out: “What makes Allah happy? Allah is happy when non-Muslims get killed”; “Annihilate the infidels and the polytheists”; “Allah, count them and kill them to the last one, and don’t leave even one”; “Throats must be slit and skulls must be shattered”; “[The Jews] are the ones who must be butchered and killed”; “Even the stone will say, ‘Oh Muslim, A Jew is hiding behind me, come and cut off his head”; and “[The Jews] are apes and pigs.”

Most of the quotes are from fanatical clerics. But that last one was from one of the most beautiful, precious 3-year-old girls you ever could see.

Westerners offered slightly softer denunciations, with the European Union, the United Nations, and political and business leaders criticizing the film as inflammatory and, as Australia’s foreign minister stated, intended to “generate discord between faith communities.” At the same time, many have defended the right to free speech—a right Islamists who carry “Freedom go to hell” signs couldn’t care less about. Although such blunt and provocative leaders as Wilders are toward the fringe of power politics, Europeans are recognizing a growing threat in Islam, and leaders like Edmund Stoiber, Pope Benedict and others are tapping that sentiment.

This is why Fitna foreshadows a conflict more dire than Wilders could ever imagine. Islam and historically Catholic Europe are on a collision course. And Europe is beginning to ease off the clutch and onto the gas.

Notwithstanding the criticism Geert Wilders has received, he is forcing an issue that is starting to resonate with many Europeans. And when Europe as a whole grows intolerant of Islam’s pushing and pushes back, watch out.

It’s going to be a fitna like no other.

Islam has integrated with its neighbor/host continent like hot cooking oil and water. Like a hijab-clad figure goes with a Frankfurt Internet cafe. Like ritual cuttings of children goes with a Provence nursery school. Like “honor” killings go with the Zurich evening news. Values and traditions like these seem out of place, to say the least, amid neo—yet classical—Europe.

Something’s got to give. Islam cannot and will not be absorbed into Western culture. It will die before it does—literally. Islam will find that it can only push a German-dominated Europe so far.

This can go one of two ways. Europe can allow the raging fire of radical Islam to push and push until it achieves its goal of taking over the Continent, as it has generously proclaimed well ahead of time. Or: fitna.

For much of the 20th century, Herbert W. Armstrong forecasted the rise of a Middle Eastern power bloc that would push at and ultimately war against its northwestern neighbor in one of the most consequential actions of the next world war. Today’s headlines are fulfilling the early stages of that forecast on a daily basis. To find out more about radical Islam’s rapidly consolidating power and pushy agenda, as well as Europe’s ultimate response to the conflict, read The King of the South and Germany and the Holy Roman Empire.