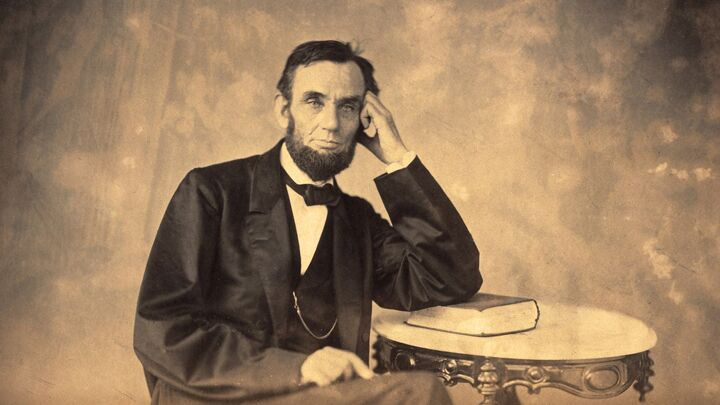 On a cold, drizzly morning in February nearly 150 years ago, a thousand well-wishers arrived at the Great Western Railway station in Springfield, Illinois, to send President-elect Abraham Lincoln off to Washington. Lincoln had not prepared a statement, but the unexpectedly large gathering inspired an impromptu. On the platform of the car, Lincoln removed his tall hat, turned and faced the crowd, and said, “My friends—no one, not in my situation, can appreciate my feeling of sadness at this parting. … I now leave, not knowing when, or whether ever, I may return, with a task before me greater than that which rested upon Washington.”

“Without the assistance of that divine Being, who ever attended [Washington], I cannot succeed. With that assistance I cannot fail,” Lincoln continued. “Trusting in Him, who can go with me, and remain with you and be everywhere for good, let us confidently hope that all will yet be well” (emphasis mine throughout).

Faith and trust in God—it was a message President Lincoln helped popularize.

Later in 1861, a Pennsylvania minister submitted a request to the secretary of the Treasury, Salmon Chase, asking that Almighty God be recognized on U.S. coins. The request prompted Secretary Chase to send this letter to James Pollock, director of the mint at Philadelphia: “No nation can be strong except in the strength of God, or safe except in His defense. The trust of our people in God should be declared on our national coins. You will cause a device to be prepared without unnecessary delay with a motto expressing in the fewest and tersest words possible this national recognition.”

On March 4, 1865, Chief Justice Chase administered the oath of office for Lincoln’s second term as president. After being sworn in, Lincoln delivered his second inaugural address. Like the Gettysburg Address, it was brief yet profound. Packed in those powerful 700 words were 14 references to God. He mentioned the Bible once, quoted it twice (Psalm 19:9; Matthew 18:7) and paraphrased Matthew 7:1. Lincoln referred to prayer on two occasions and talked about God’s aid and assistance, His purposes, His will and His judgment. “[W]ith firmness in the right,” Lincoln famously said, “as God gives us to see the right, let us strive on to finish the work we are in ….”

A month after that speech, Lincoln was shot dead by an assassin—but it was his unyielding trust in Almighty God that helped save the Union from a sure death. According to the Treasury Department’s website, “In God we trust” was inscribed on U.S. coins “largely because of the increased religious sentiment existing during the Civil War.”

Years later, in 1956, Congress resolved to establish those four words as America’s national motto: In God We Trust.

The theme of President George W. Bush’s State of the Union address in January was trust—but not in God. His speech was more than eight times longer than Lincoln’s second inaugural, yet God was mentioned only once—when euphemistically used to say good night (“God bless America”).

“[W]e must trust in the ability of free peoples to make wise decisions,” the president said. His foreign policy is grounded in that concept—trusting that absolute freedom brings out the best in people. Given the chance, he said, people “will choose a future of freedom and peace.”

Palestinians were given that chance in 2005—and within months, they chose a Hamas administration. This, however, did not phase the Bush administration’s foreign policy. Secretary of State Condoleezza Rice, during her 4,000-word speech at the World Economic Forum in January, didn’t mention God once, except in a joke about fools, drunks and Americans. Rice said the problem in Gaza is not that a group like Hamas won a free election; it’s that “the leaders of Hamas still refuse to make the fundamental choice that is required for any democracy to function: You can be a political party, or you can be a terrorist group, you cannot be both.”

Hamas campaigned on the promise to destroy Israel. That political party won 44 percent of the popular vote—more than that received by any other party, giving it 56 percent of parliamentary seats. How can anyone view that reality as a refusal of only a few leaders to make a fundamental choice? Almost half of the Palestinians chose the most extreme terrorist wing of all the political parties on the ballot! And American leadership today responds by trusting them with their own state—a state that would exist side by side with the very nation it vows to obliterate.

For the economy, the president has a similar plan for the “period of uncertainty” we are in. “[W]e must trust people with their own money and empower them to grow our economy.” So one of his proposals is to print money the government doesn’t have in order to give a $150 billion rebate to taxpayers. On the brink of economic Armageddon, consumer spending on credit is what keeps the fake money flowing through the economy. The “stimulus” package is meant to encourage more spending—not pay down debt or to build up savings. Just print more money and then trust the people to spend it—brilliant!

“Just as we trust Americans with their own money, we need to earn their trust by spending their tax dollars wisely,” the president continued. “The people’s trust in their government is undermined by congressional earmarks—special interest projects that are often snuck in at the last minute, without discussion or debate.” For six years, though, the president never complained about pork-barrel spending when Republicans held a majority in Congress. That tends to undermine his newfound disdain for pork-laden bills.

In fact, the president’s own budget proposals tend to undermine his message of fiscal conservatism. “Next week,” he said in his State of the Union address, “I’ll send you a budget that terminates or substantially reduces 151 wasteful or bloated programs, totaling more than $18 billion.” As it turns out, the budget he submitted to Congress tops out at a record-high $3.1 trillion—a 58 percent increase over what it was seven years ago ($1.96 trillion).

As for every other hot-button issue, all you need to know is this: Trust the people. You want quality health care? Let doctors and patients decide how. Education reform? Just trust that students will learn if given a chance. The ever-widening trade deficit? Trust American workers. The energy crisis? Empower American researchers and entrepreneurs with more freedom. Then, trust them.

And on it goes.

“So tonight,” the president concluded, “with confidence in freedom’s power, and trust in the people, let us set forth to do their business.”

It’s a far cry from without the assistance of Almighty God, we cannot succeed—with His assistance, we cannot fail.

Cursed Be the Man

America’s second president, John Adams, said, “Statesmen … may plan and speculate for liberty, but it is religion and morality alone which can establish the principles upon which freedom can securely stand.”

In his Notes on the State of Virginia, President Thomas Jefferson asked, “[C]an the liberties of a nation be thought secure when we have removed their only firm basis, a conviction in the minds of the people that these liberties are of the gift of God?”

President James Madison said, “We have staked the whole future of American civilization, not on the power of government … [but] upon the capacity of each and every one of us to govern ourselves … according to the Ten Commandments of God.”

The Founding Fathers knew that unless religion and morality restricted human behavior, the American experiment would not work. Without individual character, the very liberties Americans champion would eventually result in anarchy. They grasped this concept in part because of mankind’s abysmal track record and partly because of what God says about the human mind. “The heart is deceitful above all things, and desperately wicked: who can know it?” the Prophet Jeremiah asked. Desperately wicked means to be dangerously or incurably sick. In the New Testament, the Apostle Paul described man’s inherent evil nature this way: “… the carnal mind is enmity [or hostile] against God: for it is not subject to the law of God, neither indeed can be” (Romans 8:7). This is why Jesus said we need a “physician”—because the human mind must be healed of its sicknesses: selfishness, vanity, lust, greed, envy, strife and bitterness.

The Founding Fathers grasped this fundamental truth, at least in part. Most leaders today, on the other hand, have been educated in a system established on this false, basic premise: that the human mind is basically good and trustworthy.

“By trusting the people,” President Bush said before Congress, “our founders wagered that a great and noble nation could be built on the liberty that resides in the hearts of all men and women.” In fact, it was because of these many liberties that religion and morality had to be the foundation. That’s what America’s founders believed.

“[S]o long as we continue to trust the people,” the president said, “our nation will prosper, our liberty will be secure, and the state of our Union will remain strong.”

And God says as long as we continue trusting in man, our nation will be cursed (Jeremiah 17:5), which is why Abraham Lincoln was right. Put “God” in the blank. Without His assistance, we cannot succeed. But with His direction and help, we cannot fail.