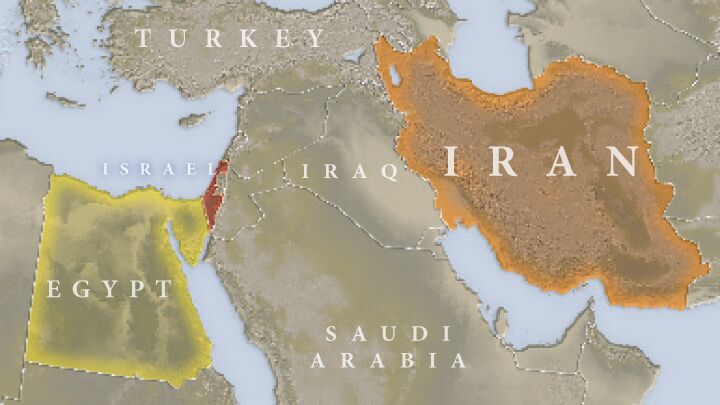 For the ancient Israelites, confrontation was a routine fact of life. Oftentimes they were a friendless and despised people with more enemies than friends. Among the crowd of enemies, there was one people—fearsome in demeanor, brutal in war and equipped with state-of-the-art weaponry—that consistently terrified the Israelites.

The Philistines were the archenemy of the Hebrews and the top national security threat for about 400 years. Beyond their penchant for conflict and advanced technologies, which included the ability to smelt bronze, the Philistines possessed another critical advantage over the Israelites: They dominated the southern coastal plains adjacent to the Israelites.

Rugged mountains and thick forests in the northern and eastern parts of Israelitish territory equipped the Hebrews with a geographic advantage when war broke out in these regions. But on the soft, undulating plains of the Levant, the Israelites were at a serious geographic disadvantage to the Philistines.

This geographic reality continues today: The national security of the Jewish state depends largely on the entity that controls and dominates the southern Levant and eastern Mediterranean.

The week after Hamas overran the Gaza Strip in June 2007, Dr. George Friedman from Stratfor wrote: “The only thing that could threaten the survival of Israel, apart from a nuclear barrage, would be a shift in position of neighboring states. …

“The single most important neighbor Israel has is Egypt” (June 19, 2007; emphasis mine throughout).

Even modern history proves this true. Israel’s national security was dangerously precarious in the 1950s and 1960s, for example, when Egypt under President Gamal Abdul Nasser was at the vanguard of Arab hostility toward Israel. This suddenly changed in the late 1970s, when President Anwar Sadat reversed Nasser’s strategy with the Camp David Accords and made a “peace” treaty with Israel.

The Israel-Egypt peace treaty has been the backbone of the national security equation of the Jewish state for nearly 30 years.

Since the late 1970s, Egypt’s comparatively warm overtures toward Israel have, to a significant extent, been a function of Cairo’s political and ideological divorce from Tehran, which occurred after the 1979 Islamic Revolution in Iran and was sealed by the Iranian-orchestrated assassination of President Sadat in 1981. When ties disintegrated between the two, the Egyptian government erased its name and number from Tehran’s little black book and essentially severed itself as a friend of the Iranian regime.

To say this pleased the Israelis is to put it mildly. Egypt’s antipathy toward Iran has been a pillar of Israel’s national security equation and a tremendous source of national confidence. The belief that Egyptian-Iranian relations are non-existent has enabled Israeli security officials to sleep at night. Tehran might have Gaza, Lebanon and Syria, they think as they nod off, but we’ve got Egypt. We’ll be fine.

Now those peaceful dreams are being replaced with a horrifying new reality: A major geopolitical realignment is unfolding between Iran and Egypt, and these countries are edging toward resuming a full-blown friendship.

Few things could gut the national security policy of the Jewish state more completely and painfully than a strong Iranian-Egyptian alliance!

Last December was a productive month for the Iranian-Egypt relationship. At the beginning of the month, Egyptian Deputy Foreign Minister Hussein Derar made the first official visit by an Egyptian official to Iran since diplomatic ties between the two countries were severed in 1979. During his trip, Derar met with Iran’s foreign minister in Tehran to discuss bilateral relations between Egypt and Iran as well as other regional and international issues.

But the relationship was thawing even before these high-level discussions. In May 2007, Iranian President Mahmoud Ahmadinejad said Tehran was ready to restore ties with Egypt and even open an Iranian embassy in Cairo. On September 18, Iranian delegates met with Egyptian officials in Cairo, and both sides officially agreed to resume dialogue. Then in November, Iran’s Minister of Industry and Mines Ali Akbar Mehrabian told reporters, as he was about to depart for Egypt, that “this is a turning point in Iran-Egypt relations.”

The day before Derar’s visit to Tehran on December 12, Ahmadinejad stressed that “Iran and Egypt are two brotherly nations,” hinting that now that Egypt and Iran are enjoying a cultural and economic relationship, only full political ties have to be restored to “pave the grounds for massive cooperation.”

The diplomatic embrace that occurred between Tehran and Cairo in 2007 was capped off on December 24, when Ali Larijani, a member of the National Security Council and close aide to Supreme Leader Ayatollah Ali Khamanei, began a two-week tour of Egypt, during which he visited with sundry high-ranking Egyptian officials.

During his trip, Larijani praised the warming occurring between Iran and Egypt and reportedly offered Egypt much-needed wheat at lower prices. Most significantly, he said that Iran is willing to lend Egypt a hand developing its nuclear program. Now Ahmadinejad himself has expressed his desire to visit Egypt as soon as full diplomatic ties are restored.

All this activity tells us that it’s only a matter of time before full ties are restored between Iran and Egypt. It could easily happen this year!

Concurrent with the strengthening Egyptian-Iranian nexus, there has been a distinct cooling of the Egyptian-Israeli relationship. Consider the increased unhindered flow of terrorists and weapons in and out of Gaza via the Egyptian border. Despite multiple agreements and promises to Israel, the Egyptian government is doing little to curb these activities.

Egypt even played a significant role in Hamas’s shocking success in taking over Gaza last June. According to Israeli Maj. Gen. Yom Tov Samia, the Palestinians have smuggled into Gaza more than 30,000 rifles in the past two years, more than 6 million rounds of ammunition, more than 230 tons of explosives and a multitude of anti-tank missiles. General Samia said this build-up has happened because “the Egyptian police and army have not yet received a clear order to block infiltration or smuggling from Sinai into Gaza” (Jerusalem Issue Brief, Dec. 19, 2007).

Clearly, the Egyptian government is more loyal to the terrorist cause than it is to keeping its promises to Israel!

In fact, Cairo’s support of Hamas runs so deep, even Palestinian Authority leaders are worried. “Alarmed by the apparent rapprochement between Egypt and Hamas, Palestinian Authority security officials in Ramallah … criticized the Egyptian authorities for failing to take ‘real action’ to halt the smuggling of weapons into the Gaza Strip,” reported the Jerusalem Post (Dec. 18, 2007). Palestinian leaders are accusing Egyptian soldiers and army officers of involvement in the smuggling business, and are complaining that Egypt’s support of Hamas goes against its “declared policy of opposing Hamas’s violent takeover of the Gaza Strip last June” (ibid.). The Israelis even have video footage of Egyptian officials helping smugglers.

Egypt’s penchant for the terrorist enterprise of Hamas (which is financed and supported by Iran) resonates across the spectrum of Egyptian society—a fact unsurprising considering that Hamas was conceived by Egypt’s Islamist Muslim Brotherhood in the 1980s.

Then, in a gloomy twist of irony, when Israel called Egypt on the carpet for breaching its agreements, Egypt dismissed the accusations, blamed the tension on Israel and even threatened action against what it claimed was Israeli belligerence. If Israel “continues to push and affect U.S.-Egyptian relations and harm Egyptian interests, for sure Egypt will retaliate and will harm their interests,” said Egyptian Foreign Minister Ahmed Abul Gheit on Egyptian television in December. “We have claws capable of retaliating in all directions, and through diplomacy” (Jerusalem Post, January 2).

In 1981, peace-loving Egyptian leader Anwar Sadat called the Iranian Ayatollah Khomeini a “lunatic” for giving birth to Iran as a state sponsor of terrorism in the 1979 Iranian Revolution. You can be sure Sadat’s powerful remark had a reassuring effect on Israel—even though Sadat was assassinated soon after.

A new strategic equation is emerging in the Middle East. “The possibility of some sort of reconciliation between Iran and Egypt has substantial implications. … An opening between Egypt and Iran changes the entire dynamic of the Islamic world. Until recently, Egypt has played an extremely quiet role. If it opens ties with Iran, it is certainly a signal that it is prepared to play a more active, important and unpredictable role” (Stratfor, January 2).

Stratfor continued: “Egypt and Iran gain by flirting with each other. However, the United States and Israel do not want to see any sort of reconciliation between the two …. Iran, meanwhile, knows that Egypt will use the opening to extract concessions [from the U.S. and Israel]. Assuming that Egypt gets what it wants—which is likely to happen—what are the Iranians expecting as a reward for shilling for Egypt?”

Just glance at a map of the Middle East—or take a moment to consider the Philistines’ geographic position in relation to the Israelites. Iran wants a presence on Israel’s doorstep!

It gets more alarming: Egypt’s changing relations with Iran and Israel are happening under a “moderate” Egyptian government. Imagine what would happen if a more pro-Islamist leadership took over the country!

“Soon, the [Muslim Brotherhood] could gain control of Egypt,” we wrote in December 2005. “President Mubarak is in his 70s and his health is ailing; clearly, he won’t be on the scene forever. … As the MB grows more popular and powerful, it will strengthen its ties with Islamic powers throughout the region—especially Iran. … Should the mb ever take control, Iran and Egypt would cement a strong alliance. Such a relationship would prove deadly for American hopes for peace in the Middle East. Together, Iran and Egypt would establish Islamic control over the whole of the region.”

This could happen at any time. If the “moderate” Mubarak government is prepared to improve ties with the Jew-hating government of President Ahmadinejad, how much more eager would an Islamist administration be to jump in bed with Iran?

Over the past decade, Israel has been ambushed by an arc of Islamic hatred that begins in Syria and Lebanon, extends through Iran, Iraq and Saudi Arabia, and culminates with Hamas in Gaza. The fact that Egypt has not been closely aligned with these states has been a rare source of encouragement for Israel.

The restoration of ties between Egypt and Iran will fill out the arc of Islamic hatred surrounding Israel!