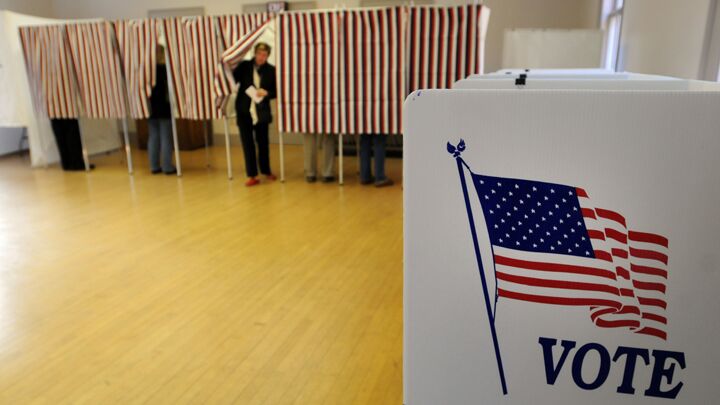 What God thinks of American democracy

From the December 2000 Trumpet Print Edition

It has been a messy year for American democracy. The general election on November 7 revealed a nation split, bitterly, precisely down the middle, over who should be president. So precisely, in fact, that it stripped decisive victory away from either candidate. A profusion of finger-pointing and accusation erupted over supposed voting irregularities—and as the leaderless country ranted and argued, it seemed the only thing certain was that whoever ended up winning would have exactly one half of the country angry at him, questioning the very legitimacy of his holding office.

In the midst of all the discussion, protest and argument, an important question went unanswered: What does God think of all this?

Power of the People

This is a valid question. What does God think of American democracy? Do you know? Most people would not even presume to guess.

Does God believe in “power of the people”? Does He influence the outcomes of elections? Does He even care who assumes big governmental offices?

Before we answer these questions, let’s step back and first acknowledge some important facts, with proper gratitude. If we look around at the various systems of government that have been tried through history, we must appreciate the benefits of American democracy.

Given many of the alternatives, an election day in the United States is a great day. It is a day of absolutes—a day of truth.

However inaccurate or slanted pre-election opinion polls may have been, they are now drowned in the cold reality of election results. The cacophony of political predictions abruptly ends. Promises that have mounted on the campaign trail reach their summit.

On election day, the people—the real source of power in American democracy—speak out. Not even the slickest of politicians can hide from his liability to the electorate. There is no allowance for a dictator to frighten people into submission. No office is guaranteed anyone through birthright or pedigree. The ballot is the ruling authority. It makes or breaks a political career.

Simply think of the “democracy” where vote tampering and fraud are rampant, where privacy is violated, where lives are threatened over how ballots are cast—consider the country run by a dictator for decades, where opposition is illegal and disloyalty is punished—think of the nation plagued by violent coups and political instability, and Americans can better appreciate their fair, peaceable, stable democratic system where, generally speaking, every vote is counted and every voice is heard. An election highlights the fact that they enjoy greater freedom than any people in the world.

Alexis de Tocqueville wrote, “If there be a country in the world where the doctrine of the sovereignty of the people can be fairly appreciated … and where its dangers and its advantages may be judged, that country is assuredly America.”

Of course, because human nature is inherently weak and corruptible, no human government is perfect. Yet it is on this count that America’s government exhibits its greatest strength. Unlike so many other forms of government, our democracy accepts the corruptibility of human leaders rather than ignoring it. Safety valves are built into the system at every level: Jurisdiction is diluted across three branches of government, each answerable to one another via checks and balances, to prevent anyone with power-lust from becoming too authoritarian; term limits thwart dynastic administration; and, most notably, the power of the vote ensures communication and accountability between the government and the governed.

It is this fundamental respect of human nature, leading to wise constraints placed upon it, that makes democracy one of the most successful forms of government ever tried. Government of the people, by the people, for the people has produced a nation full of energy and confidence—and propelled the United States to unparalleled prominence among nations.

With all that said, however, we must realize that it is not the complete story. While American democracy may avoid many of the problems that arise in other systems of government, it also comes with a heavy price tag, introducing several problems of its own, as the November election illustrated. As Tocqueville said, American democracy has its dangers too—even beyond the national divisions it exposes and exacerbates. Nationwide campaigns for the November election cost a combined one billion dollars, and left some of the population feeling disenfranchised. Exit polls showed that fully four in ten of those who voted said they left the ballot box uncertain whether the candidates they had picked were right for the job. In the presidential race, one third said neither major candidate even shared their view of government.

These facts raise another crop of significant questions. As good as American democracy may be, is this really the best we can do? Does choosing a leader have to be so complicated?

Surveying America’s gloomy landscape of political rancor and bitterness today, can’t we agree that there must be a better way?

Is it possible to have a system of government that circumnavigates all of these problems—and puts into power, 100 percent of the time and without fail, the right individuals—people who will truly and consistently act in the people’s best interest and not their own?

You will be surprised at the answer!

Let’s return to our all-important first question. Given the problems vexing America over choosing a leader, what does God think of what is happening in the U.S. right now? What does He think of American democracy?

Having established some of the benefits of a nation ruled by the power of the people, we must recognize an important truth—something the average independently minded voter would be loath to accept.

Who really chooses world leaders? Is the ballot truly the ultimate authority in American democracy? The answer is an astounding NO!

The ultimate authority over all governments, worldwide, is God! Every election, every appointment, every coronation, every revolution, coup and political mutiny—in every country and throughout history—God has allowed, or influenced, or orchestrated to the detail! That is a fact, whether or not mankind wants to believe it!

The Prophet Daniel explained as much, codified as part of inspired Scripture, in this statement he made to the most powerful of world leaders in his day, Nebuchadnezzar, king of Babylon: “… the most High ruleth in the kingdom of men, and giveth it to whomsoever he will, and setteth up over it the basest of men” (Dan. 4:17).

The Apostle Paul supported the same doctrine in the New Testament, in a letter to church members in Rome—the epicenter of the mighty Roman Empire, even the world, at the time: “Let every soul be subject unto the higher powers. For there is no power but of God: the powers that be are ordained of God” (Rom. 13:1).

There is no world leader that doesn’t owe deference to God as the source of his power!

How many heads of nations, not to mention the masses who elect them or otherwise pay them homage, understand this point of truth?

Presidents, prime ministers and kings may contrive great plans, frame elaborate policies, convinced of their own preeminence. Here is how the supreme Creator God describes their schemes: “Why do the heathen rage, and the people imagine a vain thing? The kings of the earth set themselves, and the rulers take counsel together, against the Lord …” (Ps. 2:1-2). And how does God then respond? “He that sitteth in the heavens shall laugh: the Lord shall have them in derision …. [God] shalt break them with a rod of iron; [He] shalt dash them in pieces like a potter’s vessel.

“Be wise now therefore, O ye kings: be instructed, ye judges of the earth. Serve the Lord with fear, and rejoice with trembling” (vv. 4, 9-11).

What does God think of American democracy? The best answer is that He looks down upon any government or leader who refuses to acknowledge His supremacy! God would shower favor and blessings upon a democracy or other nation that truly recognized their indebtedness to Him and set their hearts to obey Him. But when they don’t, His judgment is rightfully severe.

“Behold, the nations are as a drop of a bucket, and are counted as the small dust of the balance: behold, he taketh up the isles as a very little thing …. All nations before him are as nothing; and they are counted to him less than nothing, and vanity” (Isa. 40:15, 17).

God “bringeth the princes to nothing; he maketh the judges of the earth as vanity …. [He] shall also blow upon them, and they shall wither, and the whirlwind shall take them away as stubble” (vv. 23-24). The authorities of this world would be well advised to heed the warnings of this mighty Being, who claims indisputable superiority over the greatest of superpowers!

What does this mean for the kingdoms of this world? Will God one day fulfill these threats against them? Or is this a bunch of bluster?

You probably don’t realize it, but the gospel message of Jesus Christ was, at its heart, about this very subject. Christ announced the soon-coming destruction of all human, imperfect, ill-devised governments, to be superceded by one world-ruling kingdom under God the Father!

The leaders of Christ’s day didn’t pass His declaration off as bluster: They took it very seriously. In fact, they perceived it as a threat against them—a direct challenge to their cherished positions of authority—and they killed Christ for it!

Yes, very soon God will strip all power away from the kingdoms of this world. “And in the days of these kings shall the God of heaven set up a kingdom, which shall never be destroyed: and the kingdom shall not be left to other people, but it shall break in pieces and consume all these kingdoms, and it shall stand for ever” (Dan. 2:44). “And the seventh angel sounded; and there were great voices in heaven, saying, The kingdoms of this world are become the kingdoms of our Lord, and of his Christ; and he shall reign for ever and ever” (Rev. 11:15).

The Kingdom of God will rule the Earth—the very territory now controlled by a teeming multitude of assorted governments. This divinely ruled kingdom will have all the characteristics of kingdoms today: leaders, administrative bodies, judges, citizens, laws.

So, what sort of system of government will God establish?

Will God govern through “power of the people”? Positively not!

God alone will decide who fulfills the offices in His kingdom. He will choose those individuals for their obedience to His perfect law, which will be the absolute standard of conduct taught throughout the kingdom and expected of everyone (Isa. 2:2-3). He will ensure that they are deeply humble people, so He can trust that even with great authority they will always serve the citizens before themselves (Matt. 20:25-27). He will choose people skilled in administering judgment with mercy. They will have rock-solid character and a proven readiness to handle power graciously.

These fundamental, premier qualities of leadership cannot be categorically determined by any of the methods of choosing leaders currently employed. Only God can evaluate with perfect discernment based on perfect criteria (see sidebar, below).

Thus the myriad of problems we see rampant today will be eliminated. The dangers of democracy will be gone. “And God shall wipe away all tears from their eyes; and there shall be no more death, neither sorrow, nor crying, neither shall there be any more pain: for the former things are passed away” (Rev. 21:4).

There is a perfect government—the government of God!

If you want to know more about this coming government—and your potential part in it—write for our free booklet The Wonderful World Tomorrow—What It Will Be Like. Understand and set your heart on the true hope of the gospel—the gospel of the Kingdom of God!