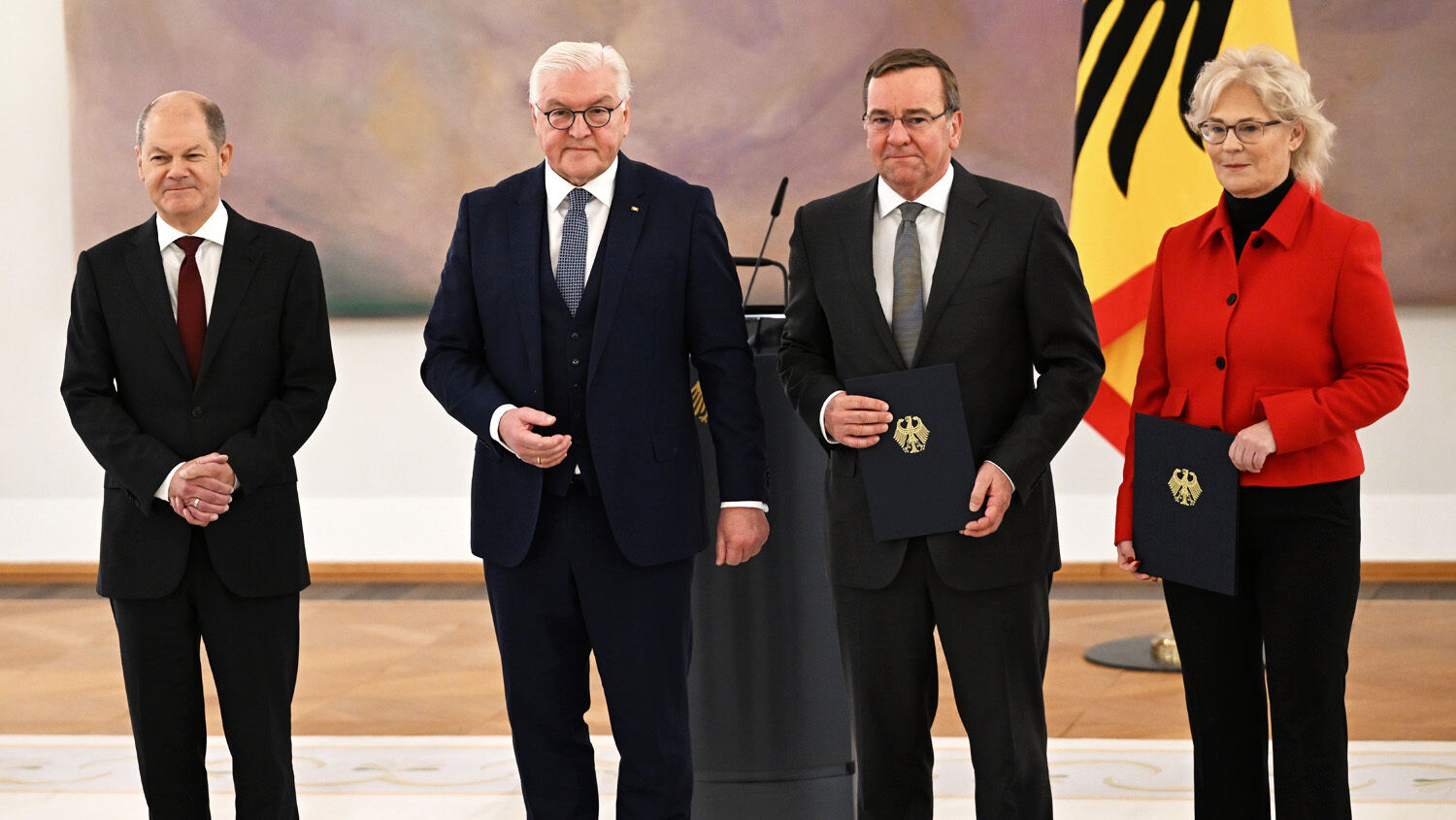 January 20 was supposed to be a day of unity for the West. Instead, German Chancellor Olaf Scholz was accused of lying, dividing the West, and failing to act.

European Member of Parliament Guy Verhofstadt wrote that Scholz is “incapable of making the right decisions.” Polish Prime Minister Mateusz Morawiecki said, “Germany’s attitude is unacceptable.” United States Defense Secretary Llyod Austin had a “fierce exchange of words” with head of the chancellory Wolfgang Schmidt, and National Security Adviser Jake Sullivan “read the riot act” to his German counterpart, Süddeutschen Zeitung reported. “Germany will never get over the shame of its cowardice on Ukraine,” the Telegraph concluded.

What happened? Germany is trying to block nations from sending weapons to Ukraine—and is lying about it.

Why? The answer to that question exposes a dark truth about German-Russian relations.

Officially, the German government claims it wants Ukraine to win. But Germany’s actions prove that the government is lying. “Why is Olaf Scholz acting the way he does?” EuroIntelligence asked. “We cannot go by what Scholz actually says because he is not telling the truth.”

Germany said it would send Leopard 2 tanks if the U.S. sent Abrams tanks. But the U.S. has explained that the Abrams tanks are too complicated and require too much maintenance. Germany also claimed that it can’t get Leopard tanks ready for Ukraine in time, so Poland said it could send its Leopard tanks over. If Germany was interested in giving Ukraine those tanks, that would have been great news; instead, it sparked controversy. Once again, Germany’s lies were exposed.

German Foreign Minister Annalena Baerbock claimed on January 22 that Germany would not block any countries from selling German tanks to Ukraine. But she doesn’t make the final decision, and Scholz hasn’t given approval. Thus the German government appears divided, and pressure on Scholz is growing.

The pressure may force Germany to approve these exports. But so far, Germany has done everything to delay and distract. There are many signs Scholz has no interest in breaking ties with Russia. The question is why.

German Defense Minister Christine Lambrecht was forced to resign on January 16, largely because of her failure to boost Germany’s military strength and provide military aid to Ukraine. The next day, Scholz announced her replacement: Boris Pistorius. This decision was a signal that Scholz hasn’t changed his stance on Russia.

Pistorius has been the interior minister of Lower Saxony for nine years and has a reputation of getting things done. He’s also the only member of Scholz’s cabinet who has served in the military. But other people have more military experience than him, so why Pistorius?

You would think if Scholz were interested in helping Ukraine, he would look for the most pro-Ukrainian and most anti-Russian colleague possible. Yet Pistorius has a reputation of being pro-Russia. Consider these facts:

Scholz has been criticized for his lack of support for Ukraine. That’s a primary reason why Lambrecht had to resign. By appointing Pistorius, Scholz could come under even more pressure from the public and media. And yet he doesn’t seem to care, and that might even be an understatement. By appointing Pistorius, he has appointed someone who has connections to Putin himself.

This is a crucial juncture for Germany. It’s not just about the survival of Ukraine as an independent country. It’s also about Western unity in face of major global threats. If Germany can’t be trusted, how can the West stand united on anything of importance in the future? Germany chances losing its Western partners—but it does not appear to care. Why?

“So what is going on inside the German government?” EuroIntelligence asked. Its most convincing conclusion is that “Scholz is surrounded by, or talking to, people who want to reset German-Russian relations after the war.” German industry demands cheap gas to remain competitive and to ensure economic prosperity. EuroIntelligence thus believes to see in Germany a “fusion of foreign and economic policy with the explicit goal of maximizing corporate exports.” Russia’s war on Ukraine “is a major disturbance to Germany’s industrial strategy. A reset is the only plausible explanation we have why Scholz is hesitating.”

If that is the message Germany has been sending to Russia, the message has been well received. Alexander Sosnowski, one of Russia’s chief state television propagandists, wrote on Telegram that Russia welcomes Germany’s attempt to revive relations. Germany’s Bild headlined: “Russians Celebrate Scholz for Tank Blockade.”

The fact that political leaders in Germany are forced to act according to the will of the nation’s industry was the cover story of our March 2022 Trumpet issue. But in “Rising From the German Underground,” Trumpet editor in chief Gerald Flurry dives much deeper into explaining the industry’s goals. “The dream of German dominance did not die with Hitler,” he wrote. “The German business empire was planning a Nazi comeback when it saw that World War ii was lost. It’s all documented for anybody to see!”

Read his article to understand what no one else understands about Germany. This understanding exposes why Germany is seeking a secret deal with Russia.

Mr. Flurry wrote in 2008: “I believe that Germany’s leaders may have already agreed to a deal with Russia, a modern Hitler-Stalin pact where Germany and Russia divide countries and assets between themselves. This agreement would allow each to turn its sights on other targets. Any such deal that may have been struck between Germany and Russia is a precursor to war!”

This is why Germany is cooperating with Russia. Economic reasons are a big factor, but there are geopolitical goals that go beyond dividing up Europe. Before going to war, Germany has always formed alliances—and often with Russia. In World War ii, Germany knew it could not attack France or Britain without such a deal.

So if Germany is seeking yet another alliance with Russia, we have to ask what it gets from the deal. Giving up Ukraine only for cheap gas isn’t the kind of deal that Germany would make. There is more to it.

Former Defense Minister Karl-Theodor zu Guttenberg once gave insight into what else goes into the negotiations with Russian President Vladimir Putin. In a 2017 interview with Fox Business, he said that Germany tries to avoid “a deal” with Russia in which Putin gets “Syria and Ukraine in one basket.”

Russia is heavily involved in Syria and also in the Balkans—two regions that are very critical for Germany’s geopolitical goals. Ukraine is less significant to Germany. Could it be the two struck a deal giving Russia Ukraine and leaving Syria and the Balkans to Germany?

If you understand Germany’s long-term thinking, you will agree that the answer is yes.

In the short term, good relations with Russia will provide Germany cheap gas. And that’s about how far analysts go. But Germany doesn’t trust Russia in the long term and seeks energy independence from it.

The Balkan region is a good transit route for energy resources, particularly natural gas. It has several key ports, such as the port of Durres in Albania, which can also support military operations. Access to the Mediterranean Sea connects Europe to major shipping routes and natural resources, including oil and gas. It also leads to key strategic choke points, such as the Suez Canal. If you have a strong military presence in the Mediterranean you can control a large part of global trade. The Balkan region would present Germany a lot of geopolitical advantages.

But Russia is heavily involved in the Balkans and used to control the region. In two world wars, Germany sought control over the region but failed. But in the 1990s, Germany got its way. Yugoslavia was divided, and the door opened for Germany to dominate. This is explained in detail in Mr. Flurry’s booklet Germany’s Conquest of the Balkans.

Russia, of course, would not give up the Balkans if Germany were to stand in its way of taking Ukraine.

But what good are the Balkans if you are faced with a hostile Middle East? That’s why Germany seeks to win over Syria—another region that Russia has a lot of control over.

If you want your energy supply secured through the Middle East, you will need to control Syria to stabilize the region. Syria is at the crossroads of the Middle East and Northern Africa. Syria is also a major transit route for energy resources, particularly oil and natural gas, which is important for Germany’s energy security. But it also houses ports, such as the Tartus port, which is Russia’s only naval base in the Mediterranean, and the Khmeimim airbase, which Russia uses for military operations in the Middle East.

Russia doesn’t want its access to the Mediterranean and the Middle East threatened. But if it gets access to Ukraine it may be willing to negotiate. This is the deal Germany might have made with Russia. We don’t know the details, but we know it will lead to war.

The Outcome Has Been Prophesied

As explained in The Prophesied ‘Prince of Russia’ and The King of the South, the Bible reveals that Russia will likely get control of Ukraine and Germany will get control of Syria. At the foundation of this outcome must be an agreement between Russia and Germany.

But what is Germany’s ultimate goal?

If Germany were to cooperate with the United States, it would likely achieve economic prosperity at a much lower cost. So why is Germany choosing to befriend Russia?

The Bible reveals that Germany’s goal is nothing less than seeking to overthrow the United States. Psalm 83 prophesies of an alliance against Israel—primarily the U.S., Great Britain and the Jewish nation in the Middle East. Verse 4 reads: “They have said, Come, and let us cut them off from being a nation; that the name of Israel may be no more in remembrance.”

As explained in “How the Syrian Crisis Will End,” Germany and Syria are part of this alliance and named in the prophecy by their ancient names. But for this alliance to work, it will need Russia’s approval.

Just as in the past, Germany knows it cannot open a Western front without being assured that Russia will stand by. Russia is also an enemy of the United States and willing to cooperate on this common goal. The attack on the U.S. will not come from Russia but rather from Germany.