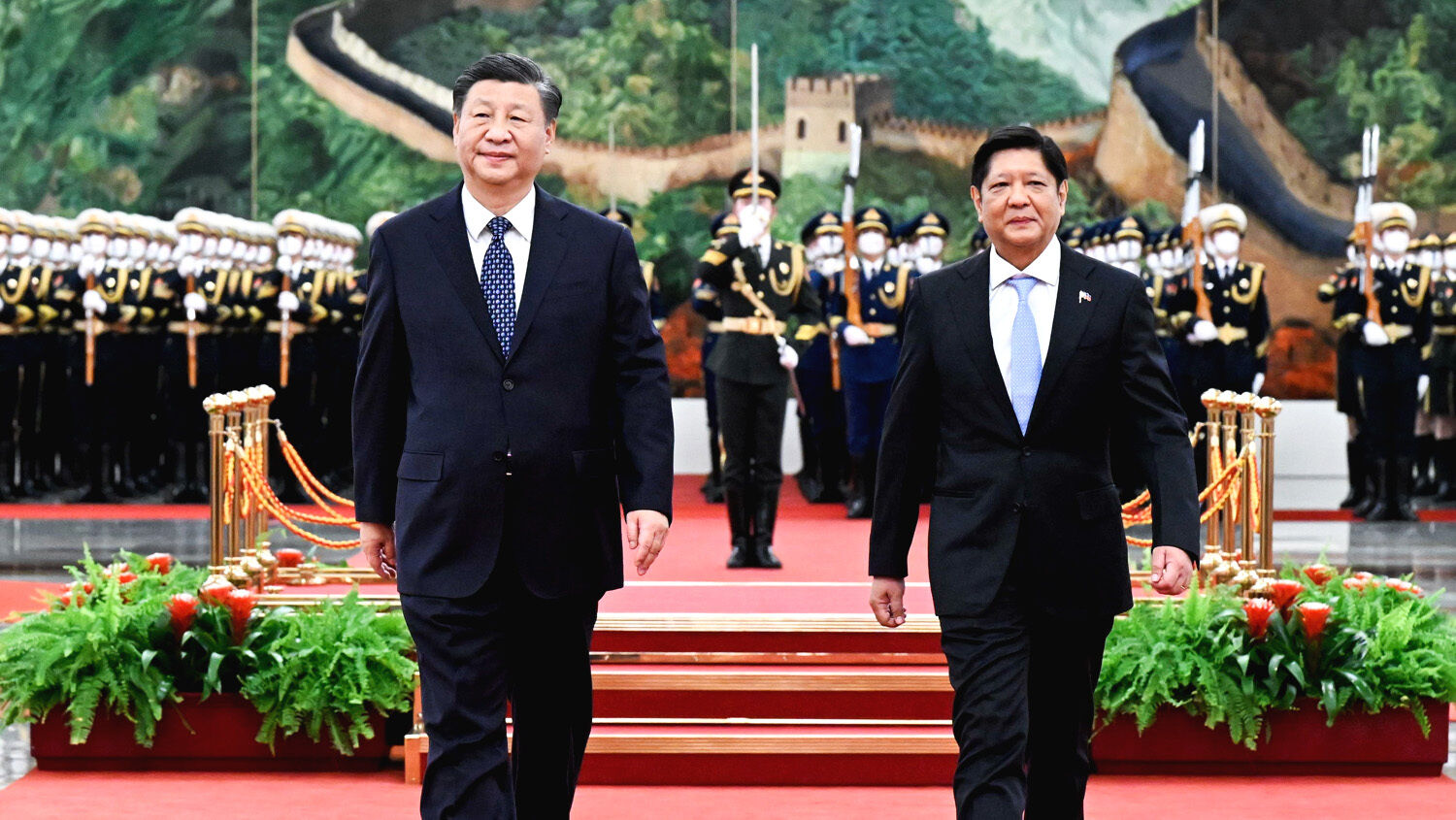 Chinese General Secretary Xi Jinping holds a welcoming ceremony for Philippine President Ferdinand Marcos Jr. prior to their talks at the Great Hall of the People in Beijing, China, on January 4.
Shen Hong/Xinhua via Getty Images

China is the first non-Southeast Asian country Marcos has visited in his six months as president.

“As we embark on a new chapter of our bilateral ties,” Marcos said, “President Xi and I shared the commitment to do everything possible to ensure that the Philippines and China will continue the positive trajectory of our relations, which have been elevated to that of Comprehensive Strategic Cooperation since 2018.”

The two signed 14 bilateral agreements that will boost cooperation in agriculture, infrastructure, development, maritime security and tourism. According to Marcos, the Philippines also secured $22 billion-worth of Chinese investment intended to spur the Philippine economy, the most immediate need for Filipinos right now. “When realized,” Marcos said, “these investments will support our country’s economic recovery efforts and create more jobs for Filipinos within our country.”

Marcos’s visit was initiated by Xi after the two men met on the sidelines of the 2022 Asia-Pacific Economic Cooperation Summit. Marcos has reciprocated, inviting Xi to the Philippines for a state visit this year. China’s invitation and Marcos’s prioritization of it, making it his first visit outside the asean countries, indicate the level of importance the two leaders place on their relationship.

Also notable is that Marcos visited despite an alarming surge of covid-19 infections in China, which has caused countries around the world to restrict Chinese travelers. Xi greeted Marcos without wearing a mask and did not put one on while they talked at an evening banquet.

Marcos is leveraging the good relations former Philippine President Rodrigo Duterte established with China, welcoming a “new golden era” with China and calling the Asian powerhouse “dependable” and the “strongest” partner of the Philippines. Although, Marcos claims to have a “friend to all, enemy to none” foreign policy, he has shown that relations with China are a priority.

Before departing, Marcos said: “I took a similar journey to China as a young man, several decades ago, and I was witness to a historic milestone in Philippine foreign policy as I accompanied my mother, former First Lady Imelda Marcos, in 1976, as she lay the groundwork for the establishment of diplomatic relations between our two countries.” He was referring to when his mother led a diplomatic mission to Maoist China in 1974 to establish a formal connection between the Philippines and the Chinese Communist Party. Marcos Sr. eventually visited, along with his entire family, including the current president. Two years later, Marcos Sr. and Chairman Mao Zedong formalized relations between China and the Philippines.

“Hopefully, your visit will not only be a ‘trip of reminiscence’ but also a ‘trip of opening the future,’” Xi said in a statement from the Chinese Foreign Ministry. “China will always place the Philippines at a prioritized direction for neighboring diplomacy, and to insist looking the China-Philippines relations from a height of strategy and over-all situation.”

While it seems Marcos Jr. is not as infatuated with China as his predecessor was, he probably recognizes that there is a considerable amount to be gained from strengthening bilateral relations. China is the Philippines’ largest trade partner, and as a result of the visit, trade between the two nations is set to increase. China has agreed to buy more agricultural products from the Philippines such as durian and mangosteen to resolve the trade imbalance between the two nations (China exports to the Philippines much more than it imports).

On the Western side, the United States has yet to materialize its defense commitments to the Philippines after efforts stalled for six years under Duterte. Marcos has not shown any concrete signs that he will pursue stronger relations with the West in the way that he is pursuing them with China. He might pursue trade and defense cooperation with the U.S. later this year, but his history with America has been complicated, particularly in light of an ongoing trial that barred him from entering the U.S. until last May, when he won the presidential election.

The U.S. has made some effort to coax Marcos into the Western fold. President Joe Biden met him at the United Nations General Assembly. And Vice President Kamala Harris visited Palawan, reinforcing U.S. obligations to the Philippines under the Mutual Defense Treaty. But these moves have not been reciprocated by Marcos. Instead, he has been silent regarding pursuing closer relations with the U.S. and only rarely mentions the Mutual Defense Treaty in his public appearances when prompted by other officials.

There is reason to believe the Philippines will pivot fully to China because of what the Bible forecasts for Asia.

Revelation 16:12 describes an Asian power bloc called “the kings of the east” that will emerge in the end time, the era we are living in now. Verse 16 shows that this bloc will be one of the major belligerents in a final world war. The April 1968 issue of the Plain Truth, the Trumpet magazine’s predecessor, explained that “despite its many national, religious and political differences, Asia will ultimately be welded together into a common power bloc. It will ultimately send its military muscle into the Middle East at the return of Jesus Christ. This prophecy is recorded in Revelation 16:12 and 16.”

Ezekiel 38 provides more details about the alliance, including the fact that this Asian bloc will be led primarily by Russia and secondarily by China. Revelation 9:16 says this alliance of the “kings of the east” will field an unprecedented force of 200 million men. In The Prophesied ‘Prince of Russia’, Trumpet editor in chief Gerald Flurry writes: “The Bible gives some important details about this largest army ever assembled on Earth. It tells us which nations will contribute soldiers to it. It shows it will include the combined forces from several Asian nations.”

Given the Philippines’ massive and growing population of over 110 million and its proximity to other Asian powers, it will likely contribute to this 200 million-man army.

To understand the significance of the Philippines-China axis and where it is leading, request your free copies of Russia and China in Prophecy and The Prophesied ‘Prince of Russia.’