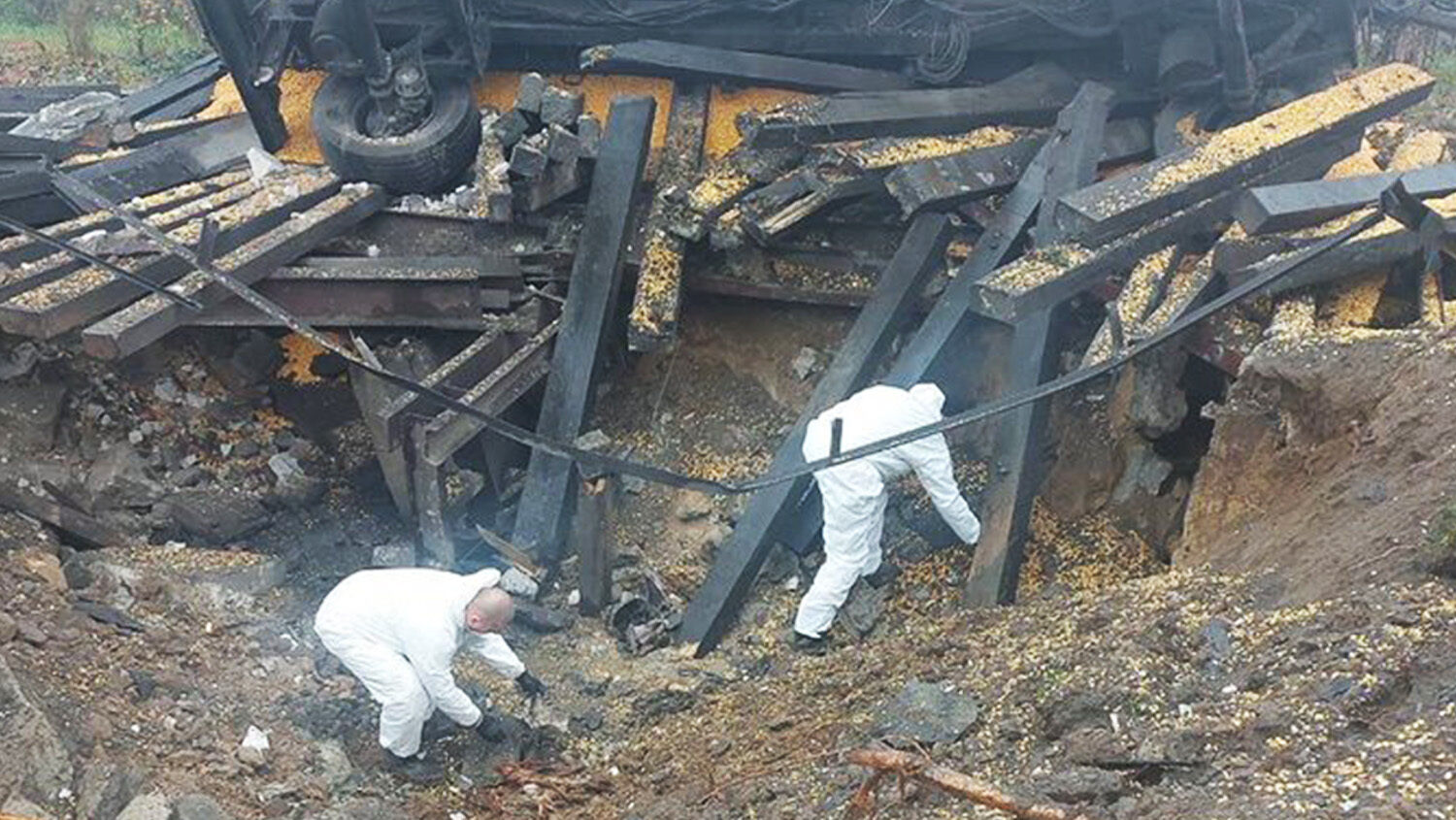 Polish policemen inspect the fields near the village of Przewodow in Poland on November 16. Two people were killed around 4 p.m. on Tuesday in an explosion at a farm near Przewodow in southeast Poland, about 6 kilometers inside the country’s border with Ukraine.
Polish Police Department / Handout/Anadolu Agency via Getty Images

Two missiles struck a farm in Poland near its border with Ukraine on November 15, killing two people. Initial reports suggested they were part of a volley of missiles Russia fired into Ukraine. After the dust settled, though, authorities said they were Ukrainian air defense missiles that were accidentally fired into Poland while aiming to strike inbound Russian missiles.

Jens Stoltenberg, secretary general of the North Atlantic Treaty Organization, said the evidence points to Ukrainian air defense missiles, and then added: “But let me be clear: This is not Ukraine’s fault. Russia bears ultimate responsibility as it continues its illegal war against Ukraine.”

The news has alarmed many because an attack on Poland, which is a nato member, could trigger Article 5 of the alliance’s charter—the mutual defense clause. Since Russia was ultimately to blame, this could put the United States and other nuclear-armed nato allies in direct conflict with nuclear-armed Russia.

Are these individuals overreacting? Or could this event soon bring the U.S. into a nuclear war with Russia? At the Trumpet, we examine such questions grounded by a different intelligence source than other publications. We look at them them in the light of Bible prophecy.

The missiles hit the village of Przewodow in Poland

Przewodow is 7 km away from the Polish-Ukrainian Border

The missiles landed 120km from Belarus, and 70km north of Lviv pic.twitter.com/uaPiS7sqvm

Approximately a third of the Bible is prophecy, forecasts about what the future holds. And a considerable percentage of those prophecies include details about a third world war: what will spark it, who the main belligerents will be, what kinds of arms it will be fought with, where key battles will occur, and more. Prophecy also makes clear how that final world war will end.

After Jesus Christ’s followers asked Him what the signs of “the end of the world” would be (Matthew 24:3), He gave an answer with many details. Before His return, religious deception would deceive many, “wars and rumours of wars” would be common, and mankind would suffer “famines, and pestilences, and earthquakes” (verses 4-7). He said these would be early indicators, but they would not signal that the end of the age was imminent.

Then Christ described an occurrence that would signal the imminent end of the era: “[T]here will be greater anguish than at any time since the world began. And it will never be so great again. In fact, unless that time of calamity is shortened, not a single person will survive. …” (verses 21-22; New Living Translation).

When Christ said this, a worldwide conflict that could threaten to extinguish all people was not yet technologically feasible. But around 1955, humanity crossed a sobering milestone: Proliferation of nuclear weapons made possible a war capable of wiping out all human life. Today, the countries of the world continue to hold each other at nuclear gunpoint. This shows that some central Bible prophecies regarding World War iii could only be possible in the modern nuclear era. It shows that the “time of calamity” forecast in verses 21-22 refers to what we now call World War iii.

Daniel 11 gives details about who the primary players in this civilization-destroying global war will be.

This conflict will shake the world.

Luke 21 records more details about Christ’s answer to the disciples. In verses 20-22, Jesus describes a development that will take place just prior to the outbreak of that final world war that threatens all humanity: “And when ye shall see Jerusalem compassed with armies, then know that the desolation thereof is nigh. … For these be the days of vengeance, that all things which are written may be fulfilled.” Matthew 24:15 calls this event “the abomination of desolation … in the holy place.”

The prophesied push by Iran against Europe discussed in Daniel 11:40 is tied closely to this time when armies will surround Jerusalem. Mr. Flurry explained the connection between the two events in his article “The Whirlwind Prophecy.”

Study Daniel’s prophecy more deeply, and you see Jerusalem right in the middle of it. … Is it because that push by the king of the south against the king of the north happens inside Jerusalem? Does it have something to do with radical Islam attacking or controlling a site owned by the Catholics?

Some of Catholicism’s holiest sites are in Jerusalem, so it is not difficult to imagine such a development occurring, or how furiously the Europeans would react to it.

Whatever the details of the “push” end up being, the Scriptures show that it will connect to armies surrounding Jerusalem and that it will escalate into nuclear world war.

So Bible prophecy is clear. It will not be Warsaw or Kyiv or Moscow or any other city that the national armies will surround in the lead-up to the third world war. It will be Jerusalem.

Russia, NATO, Armageddon and Beyond

This does not mean that we should be cavalier about the violence between Russia and Ukraine, or the possibility of greater nato involvement. Tensions between nuclear-armed nations are soaring. And nothing in Bible prophecy says the Russian war won’t escalate, possibly involving nuclear arms, and possibly drawing in other nations.

If such escalation happens, it would contribute to the “wars and rumours of wars” that Christ cautioned would be common before World War iii’s eruption. But prophecy shows that it will not be the spark that lights that final war.

Prophecy shows that a power called “the kings of the east” will be led by Russia and will play a major role in World War iii. But this Asian bloc will mainly be involved later in the conflict, not at the start.

Together these passages show that even though the currently escalating Russia-nato tensions will not trigger world war, we should still view them soberly. It should cause us to contemplate the Bible’s prophecies of a nuclear world war, and to see that they are approaching fulfillment.

That unfathomably destructive war is approaching. But the Bible’s prophecies do not conclude with nuclear war erasing mankind from Earth.

In Matthew 24:21-22, just after Christ says that the war at the close of this era will be so catastrophic that it could eradicate all human life, He then adds a key statement: “But it will be shortened …” (nlt).

World War iii will be cut short by Christ’s return. In his booklet Nuclear Armageddon Is ‘At the Door,’ Mr. Flurry discusses this interruption:

Revelation 19:11-16 describe the scene as Christ returns to assume His office as King of kings, ruling over Russia, Ukraine, Poland, the United States and the whole world—and bringing peace to all. On the topic of this halcyon age, Isaiah 2:4 says: “[N]ation shall not lift up sword against nation, neither shall they learn war any more.”

To understand rising global tensions in the prophetic context, and to learn about the hope that is at the heart of it all, order your free copy of Nuclear Armageddon Is ‘At the Door.’