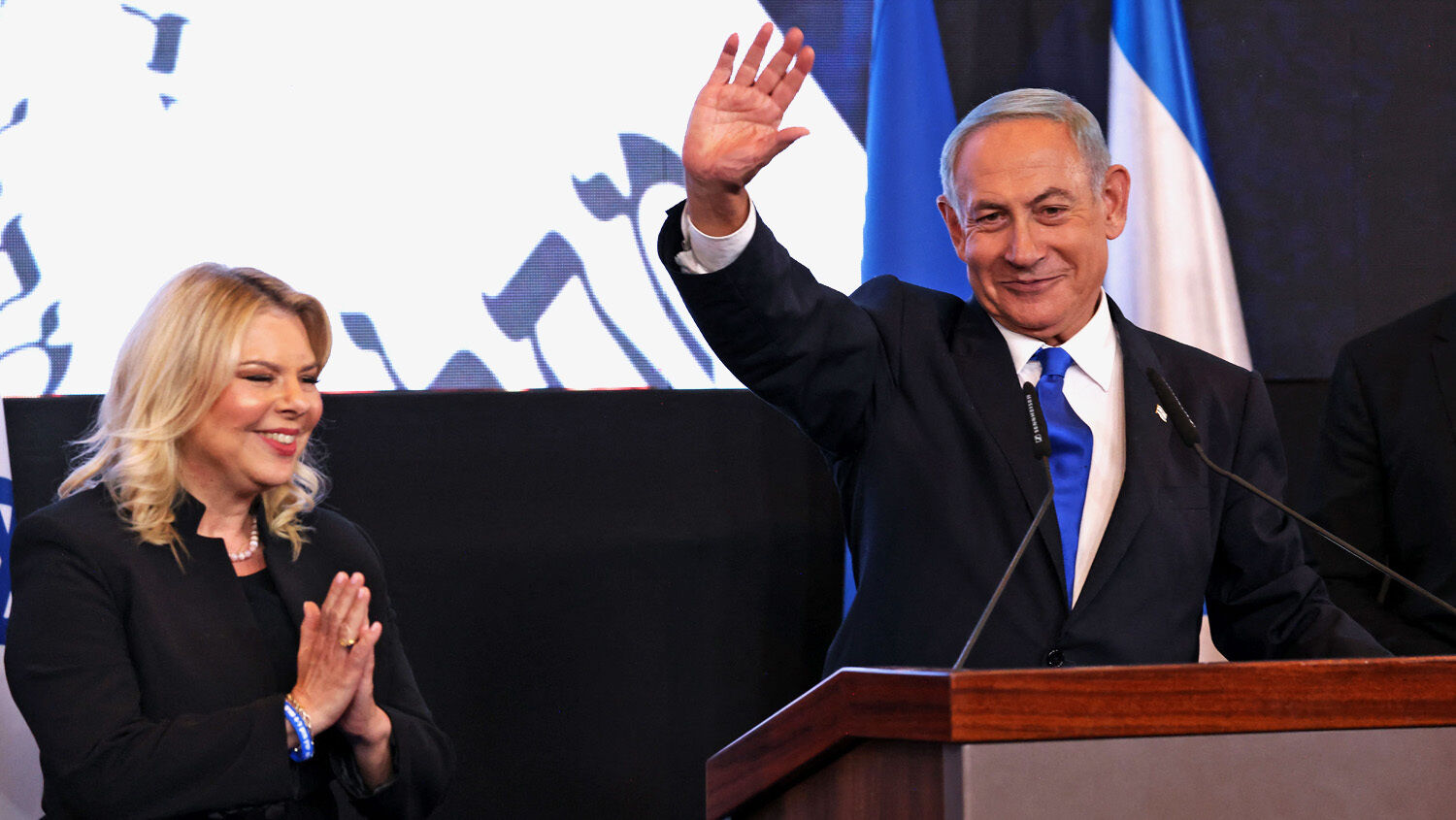 Israel’s former prime minister and leader of the Likud party, Benjamin Netanyahu, addresses supporters at campaign headquarters in Jerusalem early on November 2 after the end of voting for national elections.
MENAHEM KAHANA/AFP via Getty Images

Israel’s longest-serving prime minister is back. Will his American counterpart soon follow?

jerusalem
Finally, an Israel election with a definitive outcome. As the few remaining votes continue to be counted today, it is clear that Benjamin Netanyahu will once again be Israel’s prime minister.

As the count stands now, Netanyahu’s coalition will receive 65 seats in the 120-seat Knesset, marking the first time in the past five elections that there is an outright victor. Netanyahu’s Likud party will be in coalition with two ultraorthodox parties, Shas and United Torah Judaism, as well as the surging Religious Zionism party.

On the other side, the election was a resounding defeat for center-left Prime Minister Yair Lapid as well as his hard-left coalition partners, who together look set to hold only 50 seats.

The swing to the right comes after a year and a half of governance by the “anyone-but-Bibi” camp. This time out of office has proved to be a political boon for Netanyahu. It provided ample evidence to Israelis that removing Netanyahu was not the cure-all it was meant to be. It did not solve Israel’s increasing cost of food and housing or Israel’s internal security issues. Nor did it tone down the incredibly divisive political discourse. Instead, these problems got far worse.

Furthermore, Israelis watched their government get repeatedly pushed around by an antagonistic Biden-led United States government, most recently in disastrous capitulation to America in a border dispute with Hezbollah-dominated Lebanon.

All the negativity of the past year and a half provided much of the winning platform needed to return Netanyahu to office, even if the national press was against him. As Israel Hayom noted, “He has achieved this victory almost single-handedly while being on trial and having renounced the elite. Netanyahu relies almost exclusively on the traditional-religious-rightist-conservative public, without the help of the mainstream media and only through social media and a press that supports him.”

Expectedly, the mainstream press was infuriated by the result. As soon as Netanyahu’s victory looked inevitable, Haaretz released an editorial titled “Kahanism Won. Israel Is Now Closing In on a Right-wing, Religious, Authoritarian Revolution.” The angry rant from Haaretz takes aim at Netanyahu’s coalition partner, the Religious Zionism party for what it sees as far-right religious extremist positions. The party is headed up by Bezalel Smotrich and Itamar Ben Gvir, whose platform calls for a far stronger fight against terrorism in the West Bank, reining in Israel’s runaway Supreme Court, as well as greater religious freedom on the Temple Mount, Judaism’s holiest site.

As Jonathan Tobin proves here, Israel’s democracy is not at stake with the inclusion of Religious Zionism in the government, yet that’s exactly why Haaretz believes revolution is afoot. This is how the outlet summed up the election result: “Israel is now on the verge of a right-wing, religious, authoritarian revolution, whose goal is to decimate the democratic infrastructure on which the country was built. This may be a black day in Israel’s history.”

And yet as proved by the election result, most of Israel disagrees with Haaretz. Voter turnout was higher than in the past six Israeli elections. And the vote produced the most decisive result of the past decade of Israel’s elections; a thorough repudiation of the leftist, new-age, lawless, liberal agenda and an embrace of Israel’s traditional and conservative values.

No doubt such a stunningly clear victory for Prime Minister Netanyahu’s coalition is an exciting development for Trumpet readers. In many ways, the same culture war on display in Israel’s latest election is evident across the other nations of biblical Israel, especially in the United States. (For proof that America is part of biblical Israel, please read The United States and Britain in Prophecy, by Herbert W. Armstrong.)

Ever since U.S. President Donald Trump left the White House, Trumpet editor in chief Gerald Flurry has forecast that he will once again return to power. He bases this on a prophecy in 2 Kings 14, which discusses the dramatic resurgence in power experienced by the northern tribes under King Jeroboam ii, a type of President Trump. The main fulfillment of this dramatic temporary resurgence led by Trump is yet to happen.

Anciently, Jeroboam ii also had a close alliance with the Jewish king ruling from Jerusalem. The modern counterpart of this relationship was on display during President Trump’s first term. The president was known as the greatest friend that Israel has ever had in the White House. In office at that same time was Mr. Netanyahu. Thus, knowing that Mr. Trump would return, we also speculated, that “Netanyahu will reclaim his position in Israel” as well.

This has now happened. How soon before President Trump regains office as well? To learn more about this profound biblical connection between the United States and Israel, please read Gerald Flurry’s cover story from the September 2022 Trumpet, “Britain’s and Judah’s Governments Fall—America Next?”