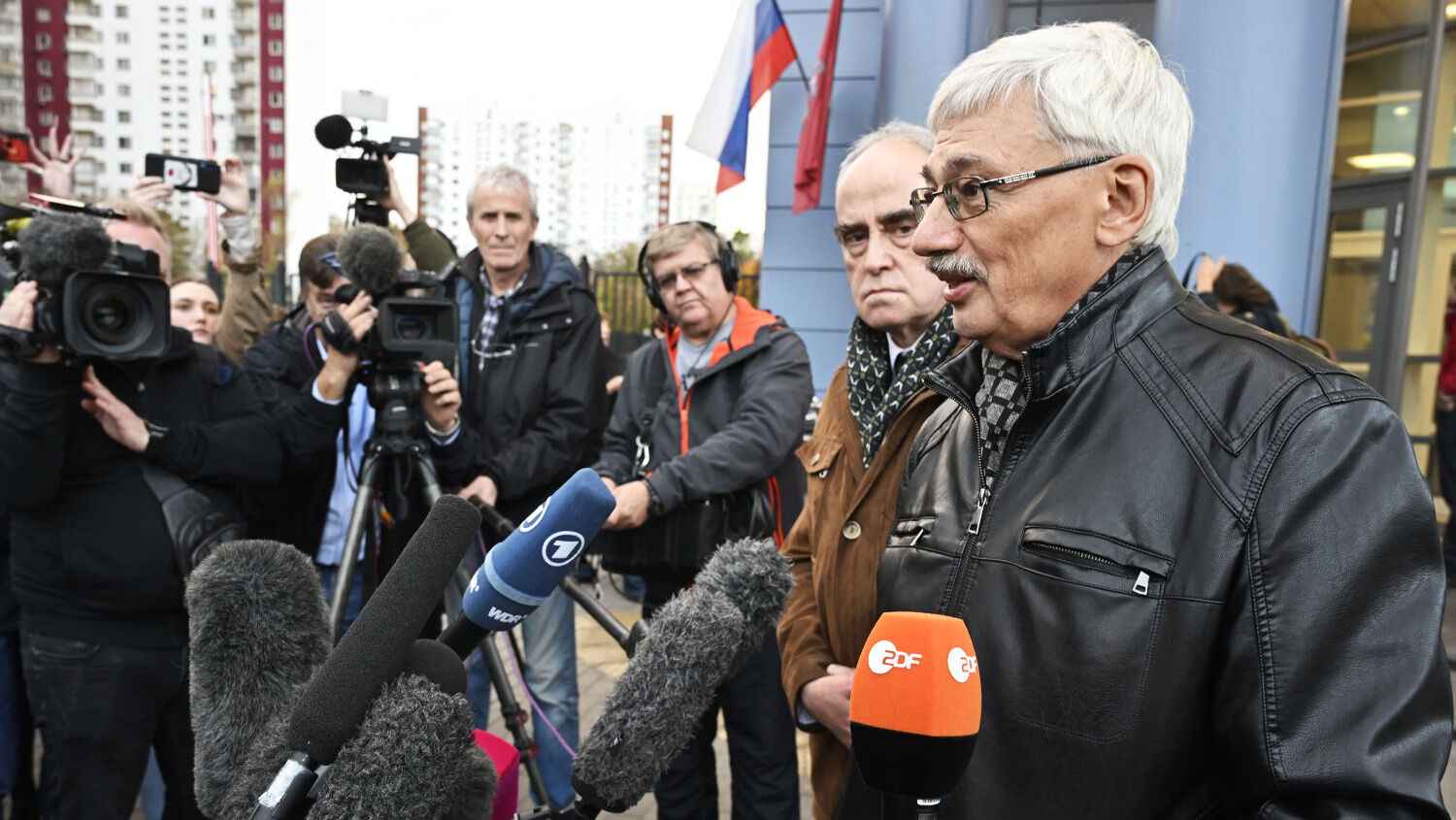 From right: Oleg Orlov, one of Memorial’s leading activists, and Yan Rachinsky, one of the founders of Memorial, meet with the media after the group was co-awarded the 2022 Nobel Peace Prize.
ALEXANDER NEMENOV/AFP via Getty Images

The great paradox of peace on Earth

“The Peace Prize laureates represent civil society in their home countries. They have for many years promoted the right to criticize power and protect the fundamental rights of citizens. They have made an outstanding effort to document war crimes, human right abuses and the abuse of power. Together they demonstrate the significance of civil society for peace and democracy.”

So reads the opening preamble on the Nobel Peace Prize’s website for the 2022 laureates. Against the backdrop of the Ukraine war, three laureates from Russia, Ukraine and Belarus were given prizes: Ales Bialiatski, chairman of the Belarussian human rights group Viasna; Ukraine’s Center for Civil Liberties; and Memorial, Russia’s oldest human rights organization. The Norwegian Nobel Committee announced this year’s laureates on October 7.

Ukraine, of course, is ground zero for the conflict. Belarus, an ally of Russia, served as a launch pad for the Russian military into Ukraine. But awarding the peace prize to a Russian human rights group right as Russian President Vladimir Putin ramps up his attack on Russia’s freedoms at home is noteworthy.

Under the leadership of Mikhail Gorbachev, the Soviet Union in the late 1980s went through a transformation. He helped relax political pressure on people through the policy of glasnost (“openness”). People suddenly had more freedom to criticize the government. Memorial was a product of glasnost. It was founded in 1989 by grassroots activists wishing to learn the truth about the gulag system. (Gulags were the forced labor camps the Soviets used to punish political prisoners. Soviet dictator Joseph Stalin especially favored using them against enemies.) Memorial developed into several branches. Memorial International was the umbrella organization and Memorial Human Rights Center was one of the largest branches, focusing on abuses of power by the current Russian government. Both were based in Moscow.

Both these branches were liquidated by court order on February 28 of this year, just days after Russia invaded Ukraine on February 24. Memorial’s decentralized nature means the local organizations can keep their heads above water. But the main faces of Memorial are now, as Leon Trotsky once said of his opponents, in “the dustbin of history.”

Memorial was nominated for the Nobel Peace Prize in January by a faction in the Estonian parliament.

“Every day, we feel that it’s more difficult to continue our work in Russia,” said Irina Galkova, the director of Memorial’s museum in Moscow. “Many of our colleagues had to move abroad. [But] we try to do everything we can do here, in Russia.”

As a human rights group, Memorial has always butted heads with the government in Moscow. “Before February 24, we felt ourselves first of all as victims of the current regime,” Galkova told the Trumpet. “After the war was proclaimed, this feeling changed because now we feel our responsibility for the crimes committed by this regime that we could not prevent and we cannot change currently. And it’s quite a horrible feeling.”

This makes the awarding of the Nobel Peace Prize bittersweet.

“[Soon after] getting … our prize, there was a horrible attack made by Russia to Ukraine, and it was so frightening and horrible that you just could not be happy about getting this prize,” said Galkova. “Especially when it’s a peace prize—when you see how horrible the war is and it gets another [escalation] and it takes hundreds of human lives.”

It doesn’t look like Russia’s war is going to end soon—certainly not in a way that gives peace and freedom to Ukraine. It doesn’t look like Memorial’s situation will be improve, either. Awarding the most prestigious prize in peacemaking right when the situation looks bleak for both Ukraine and Memorial is a cruel irony.

And this couldn’t have come at a more ironic time of year. In Russia, October 29 is the Day of Remembrance of the Victims of Political Repressions. It was established in 1991 as one of the last acts of the Soviet government to honor the victims of people like Stalin. Since 2007, the Returning the Names tradition, where the names of victims of Soviet repression are read out, takes place outside the Lubyanka, the former headquarters building of the kgb.

2022 has brought a new disaster and new victims; people are dying right now and this unimaginable tragedy unfolding before our eyes must be brought to an end as soon as possible. We are convinced that Returning the Names is very much relevant now, reminding [us] of the fundamental unconditional concept of utmost importance: Nothing in the world can be more precious than a human life, and therefore, no government has any right to take a life. It was true in 1937, and it is no less true now, in 2022. The more people will share this idea, the higher the chance that the war will end soon and will never happen again.

That is why we invite you to remember the names of those murdered by the Soviet Great Terror.

Commemorations like the Nobel Peace Prize and Returning the Names are meant to stop more atrocities from happening. Yet the atrocities keep coming. In Ukraine, more and more names are being added daily. And there’s little to nothing anybody can do about it.

This is not the only time the Nobel Peace Prize has raised a few eyebrows. In 1973, it was awarded to American diplomat Henry Kissinger and North Vietnamese official Lê Đức Thọ for ending the Vietnam War. Less than two years later, North Vietnam conquered South Vietnam. In 1994, Palestinian terrorist Yasser Arafat won it. This is the same man the think tank Foundation for Defense of Democracies called “the father of modern terrorism.” In 2019, Ethiopian Prime Minister Abiy Ahmed won it for his peace deal with Ethiopia’s enemy, Eritrea. Since then, Abiy has led Ethiopia into a civil war with allegations of genocide.

This is the great paradox of peacemaking in the modern world. Man creates awards like the Nobel Peace Prize to celebrate peace. Yet the more mankind tries to make peace—to celebrate peace—to proclaim peace—the more mankind fails. Jesus Christ said, “Blessed are the peacemakers: for they shall be called the children of God” (Matthew 5:9). Yet man’s efforts to make peace have been anything but “blessed.” As another biblical author put it, “The way of peace they know not …” (Isaiah 59:8).

The United Nations is another institution set up to bring peace. Herbert W. Armstrong, editor in chief of our predecessor magazine the Plain Truth, was present at the UN’s inaugural conference in San Francisco. This is what he wrote at the time:

Yes, the efforts to form a world peace-enforcing government here are proving, in themselves, a continuing contest, punctuated by constant strife.

The firebrand here is Stalin’s top man, Molotov. I’ve attended press conferences here where protesting representatives of Lithuania, Latvia, Estonia, cry out against grave injustices forced on their people by the overpowering Russian boot. Three million from Lithuania have been torn from their homes and families and deported to Siberia!

In a private interview with Constantin Fotich, pre-Tito ambassador to the U.S. from Yugoslavia, I learned that 30,000 small farm owners in Yugoslavia have seen their homes and farms confiscated by Stalin’s puppet government. Some of these remain on their farms as slaves, some have been driven to Siberia—many have been “liquidated”—killed!

I do not see peace being germinated here, but the seeds of the next war!

Success of the United Nations’ effort for world peace requires complete harmony between the Big Three. But if America and Britain are to achieve harmony with Russia, it is already apparent it will have to be at the cost of justice in the smaller Baltic and Balkan nations and Poland. And if the rights of these helpless millions are to be trampled upon with impunity as the price of peace with Russia, then we still have no peace!

It’s interesting that Mr. Armstrong all those decades back put the focus on Russia as to why the UN couldn’t bring peace. The same is true today with Ukraine. It’s clear Putin isn’t going to stop the fighting until he gets what he wants. The only peace agreement Putin would accept is one that still gives him what he wants—control of Ukraine—in an underhanded way. If such a deal comes to effect, as Mr. Armstrong wrote, “then we still have no peace.”

It’s a pessimistic view of the world. But until something radically changes—not just in Russia or Ukraine, but in the whole world—nothing is going to change. The Nobel Peace Prize and the UN will be reminders that man’s constant search for peace is fruitless.

They will be reminders that, as Trumpet editor in chief Gerald Flurry often says, “there is no hope in man.”

Does that mean that world peace will never come?

Isaiah wrote that man doesn’t know “the way to peace.” There is a way to peace. It has eluded mankind for thousands of years, but it does exist. In a handful of examples, this “way of peace” has even been implemented in living memory with real, tangible results. It’s certainly an unexpected method of bringing world peace. But it works.

And contrary to how hopeless events like the Ukraine war may make men feel, this “peace plan” will bring lasting peace—not only to Eastern Europe but to the whole world. And it will do so very soon.

To find out what it is, request a free copy of Gerald Flurry’s booklet The Way of Peace Restored Momentarily.