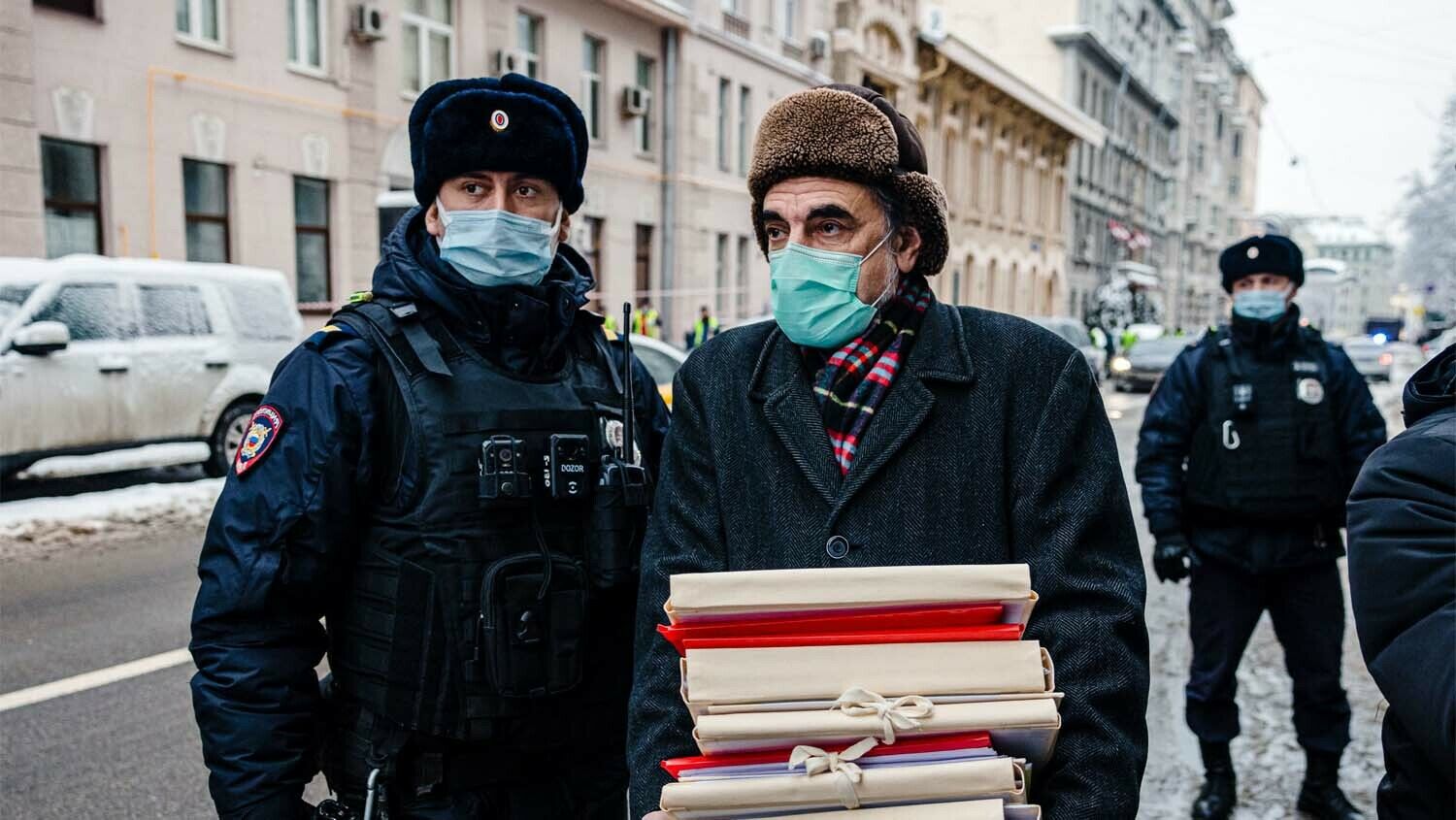 Putin’s ‘greatest geopolitical catastrophe’ is one step closer to being undone.

Memorial was founded in 1989 by grassroots activists wishing to learn the truth about the gulag system. The gulags were the forced labor camps the Soviet government used to punish political prisoners. Soviet dictator Joseph Stalin especially favored using them to punish enemies.

Memorial is decentralized. There are many different branches based in cities in Russia and Europe. One of the biggest branches is Memorial International, based in Moscow. Another large branch is Memorial Human Rights Center, also based in Moscow. Memorial International’s focus is on documenting the history of the gulags. The Human Rights Center focuses on rights abuses in present-day Russia.

Memorial was organized amid the Soviet Union’s experimentation with glasnost, meaning “openness” in Russian. Glasnost was Soviet leader Mikhail Gorbachev’s name for policies that allowed greater freedoms of speech and government transparency in the Union of Soviet Socialist Republics. But allowing Soviet citizens to openly criticize government policy inadvertently pressured Moscow to reform. Glasnost empowered ordinary citizens to attack a crumbling government system. Glasnost helped cause the collapse of the Soviet Union.

The courts’ decisions show that Moscow found a weapon to fight back with. And Moscow is winning.

The charges for liquidation were brought under Russia’s controversial foreign agent law. First passed in 2012, it has caused many problems for nongovernmental organizations (ngos). This is especially relevant regarding foreign funding.

“It was … made clear from the beginning that this law will be used for repressions,” said Irina Galkova, director for Memorial’s museum in Moscow. “No matter what you do, if you get some help from foreign organizations, you will be proclaimed as a foreign agent. … You cannot get money from abroad [while] doing something that can be named political activity. But there is no explanation what can be taken as political activity and what is not under this term. And in fact, we see that any public opinion, and especially any criticism of government decisions made publicly, is taken here in Russia as political activity.”

Any organization branded a foreign agent must make financial and other records constantly available for government inspection. They are also blacklisted from working with certain state institutes like universities and museums. This forced many smaller ngos to fold under pressure. But until this point, Memorial was able to keep going. The latest court decisions, which brand Memorial in violation of the foreign agent law, are a major threat.

A major accusation against Memorial is that the organization is rehabilitating the Nazis. One of the accusers is Russian President Vladimir Putin. During Memorial’s trial, Putin had a meeting with a human rights organization. In the meeting, according to Galkova, “the question about [Memorial’s] liquidation was raised. And Putin told [them] that he respects a lot Memorial as an organization, but he can’t help it because Memorial is justifying Nazi criminals.” Galkova said they even “got this line in the court decision.”

Some of the people Memorial lists as Stalinist political prisoners did become Nazi collaborators. The same list contains people who were later war heroes in the Red Army. Memorial has also held exhibitions on the suffering of Russian prisoners in German forced labor camps. Clearly Memorial is not a promotional organization for fascism.

Galkova said she doesn’t know how personal Putin’s involvement in Memorial’s case is. But he is the leader of the nation, the man with more access to information than probably anybody else in Russia. He would know better than anybody that the allegations are false. Claiming Memorial promotes Nazism shows, at the least, he approves the courts’ decisions.

Galkova also said that the text of the court decision condemned Memorial as “making [a] bad image of the Soviet Union as a country, [a country that] has to repent of their crimes and not be proud about its victories.”

Historians estimate Stalin is responsible for the deaths of at least 10 million people. But according to the Russian courts, exposing these kinds of crimes makes you a Nazi. Stalin was apparently infallible.

Russia has come a long way from the Soviet period. The details of Stalin’s crimes are now well-known. Once-forbidden books detailing the history of the gulags are now legal to own and read.

“It’s impossible now to deny [that] repressions took place,” said Galkova. “But the tendency in the current situation is to put it under question—if they were really so terrible or not, or maybe they have a reason to excuse some deeds. … Maybe Stalin was not so much a criminal, maybe he did something good. … [There is no tendency] with denying the very fact of repressions. But there is a tendency … not to speak much about it, to remember most of all about the victory on Nazism, and [anything] we can be proud of [from that period].”

“Even if we compare the speeches of the prosecutors in the two court sessions of … Memorial International and Human Rights Center,” Galkova said, “they have very much in common. But in the case of Memorial International, they were speaking about the bad picture of our past. In the session of Human Rights Center, they were speaking about the bad picture of current Russia.” Galkova continued: “[The Russian government doesn’t] want the current problems [in Russia] to be evident and visible, and they don’t want them to compare to the events that took place in the Soviet period.” In other words, looking into Stalin’s Soviet Union makes modern Russia look bad. The only reason this would be the case is if modern Russia were going down the same path as the ussr.

Another recent incident with Memorial testifies to this. Yuri Dmitriev, a researcher with Memorial’s St. Petersburg branch, uncovered the site of a Stalinist killing field in Karelia, a region near the Finnish border, in the 1990s. He turned it into a site of remembrance that has attracted many foreign visitors. He has also identified thousands of victims of the Soviet government in Karelia.

In 2016, he was accused of serious charges and threatened with years of imprisonment. The details of the charges suggest some kind of entrapment. Two times the courts acquitted him. Recently, he was sent to court for the same charges a third time and convicted. He now faces 15 years in prison.

The Russian government wouldn’t stop going after him until it got the verdict it wanted.

I asked Ms. Galkova if she thought that the freedom of speech reforms of the late Soviet period were undone. In other words, if the legacy of glasnost was now dead. “Yes,” she said, “and there are such opinions that we went back to [what life was like in] 1980, approximately.” She continued: “In the late Soviet Union, the situation was better. … It was possible for Memorial to emerge in late Soviet times. And now we see that there is no place for us in the current situation.”

Galkova is optimistic that the situation will one day change in Russia. The Internet gives Moscow a harder time controlling information than during the Soviet period. Both Memorial International and Memorial Human Rights Center are appealing their court decisions. And Memorial’s decentralized organization means that the branches in other cities are unaffected by the liquidation orders. Even the European Court of Human Rights is intervening.

Even so, for the short term at least, circumstances do look bleak. Galkova said that “it’s evident that it turns always to the worse. We just analyze the situation from year to year in Russia, and now we have not much hope that, in the next years, there will be some good changes in the situation.”

In 2005, Vladimir Putin said that the Soviet Union’s collapse was “the greatest geopolitical catastrophe of the [20th] century.” Many interpreted this to mean he mourned how the other Soviet republics left Moscow’s orbit. And indeed, one of the most defining legacies of the Putin era has been his attempt to bring those countries back into Russia’s control. He has sponsored military activities in Ukraine, Georgia, Kazakhstan and other areas.

But the latest events with Memorial suggest that he is also trying to rebuild the Soviet Union within Russia. In his booklet The Prophesied ‘Prince of Russia,’ Trumpet editor in chief Gerald Flurry writes that “Putin has a long pattern of diabolical evil on the level of Joseph Stalin. … No leader in Russia has equaled Putin’s diabolical evil since Joseph Stalin.”

Stalin was one of the bloodiest mass murderers in history, rivaled by few. Nobody is accusing Putin of having killed as many people as Stalin did. But since World War ii, Russian leaders have, in general, been moving away from Stalin’s standard. Nikita Khrushchev denounced Stalin’s legacy. Relations with the United States warmed under Khrushchev’s successor, Leonid Brezhnev. Mikhail Gorbachev and Boris Yeltsin tried to introduce a taste of freedom and prosperity into Russia.

Commenting on Putin’s 2005 statement, Mr. Flurry writes: “Given the dozens of millions of Soviet citizens who were imprisoned, persecuted and murdered under that authoritarian system, most of us would say the opposite! Putin not only mourns the ussr’s collapse—he is bent on rebuilding it and restoring the glory of imperial Russia! … If you look at Russia’s recent history, you can predict much of its near future.”

Putin is taking Russia down the path of its Stalin-led history. This does not bode well for Russia’s—or the world’s—future. To learn more, please request a free copy of The Prophesied ‘Prince of Russia.’