What God thinks of human governance 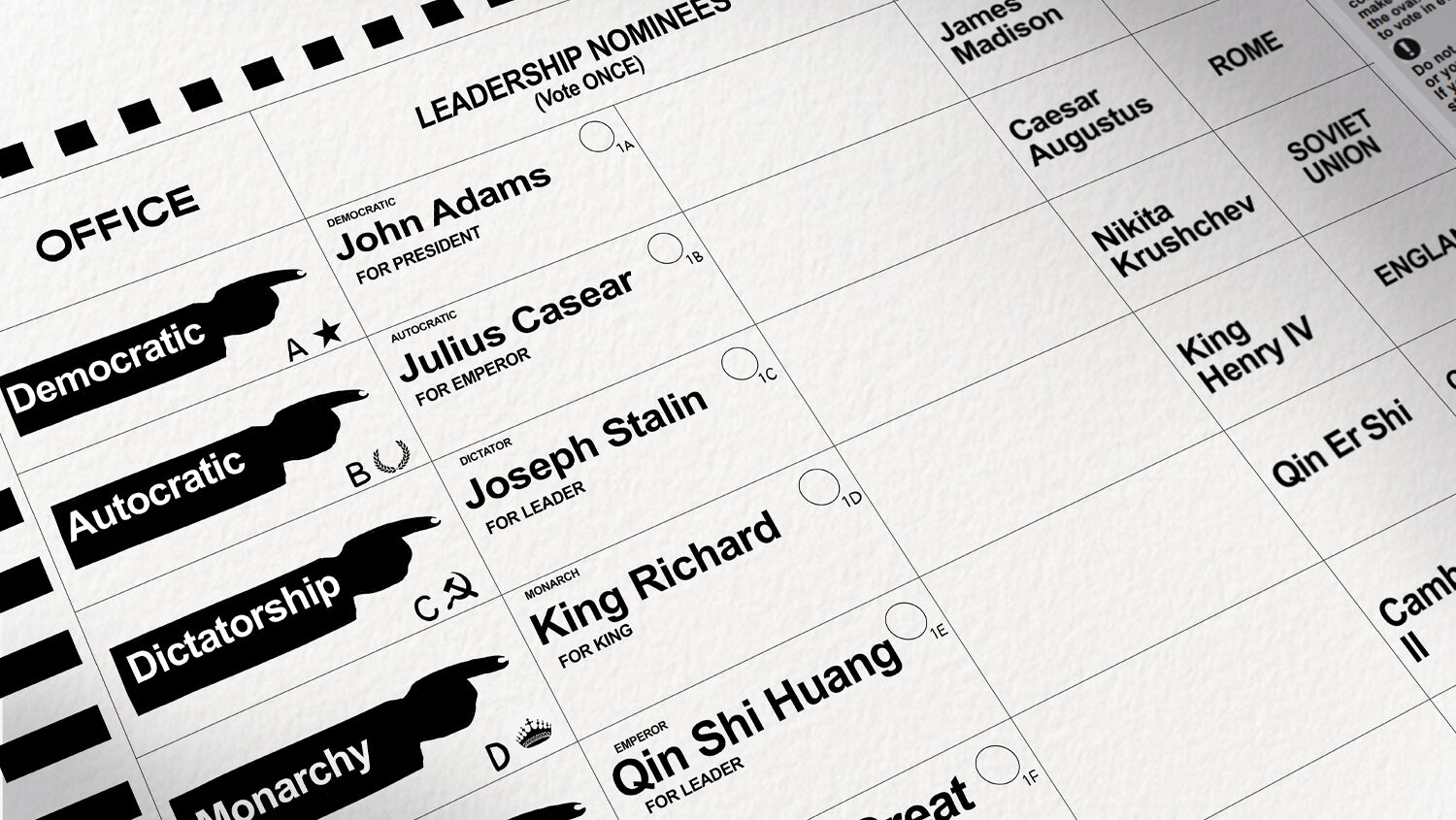 What God thinks of human governance

What does God think of human government? What does He think of democracy? Does He influence the outcomes of elections? Does He even care who assumes high governmental offices?

On election day, the people render their choice for whom they want to lead them. In some nations, that choice is honored. In some, it is subverted. In some, it is directly opposed by those in power. In many nations, vote tampering and fraud are rampant, privacy is violated, lives are threatened over how ballots are cast. In some, opposition is illegal, and disloyalty is punished.

Human nature is inherently weak and corruptible, so all human governments are flawed (we will see later how far this flaw extends). Alexis de Tocqueville wrote, “If there be a country in the world where the doctrine of the sovereignty of the people can be fairly appreciated … and where its dangers and its advantages may be judged, that country is assuredly America.” The United States Constitution acknowledged the inherent flaws of human nature, including in their leaders, and organized the government to allow the flawed individual the most freedom and accountability over his own life, with the least amount of interference, complication and oppression from flawed leaders. Laws guaranteeing individual rights, the sovereignty of the people, limited government, separation of powers, balance of powers, checks and balances and other precautions against human nature gave some generations considerable freedoms that most people throughout history have been deprived of.

But these innovations also have costs of their own, as every election illustrates. As Tocqueville said, democracy has its dangers too. It expends a fantastic amount of money, it exposes and exacerbates divisions, and it enables some who are unfit to lead—to actually lead.

Now, even America has entered a post-Constitution era, dominated by an illegitimate, oppressive government far worse than the one from which the colonists originally declared independence. For all its excellences, even the longest-lasting and most-enlightened written constitution in the world endured less than 250 years and could not withstand its own usurpation by its own people.

What hope is there for human government?

You will be surprised at the answer!

Let’s return to our all-important first question. What does God think of human government? Does He care? You might be surprised to learn that there is almost nothing that He cares about more!

Having discussed some of the benefits of a nation ruled by the power of the people, we must recognize an important truth—a fact the average, independently minded voter would be loath to accept.

Who really chooses world leaders? Is the ballot truly the ultimate authority in American democracy? The answer is an astounding NO.

The ultimate authority over all governments, worldwide, is God. Every election, every appointment, every coronation, every revolution, coup and political mutiny—in every country and throughout history—God has allowed or influenced or orchestrated to the detail. That is a fact, whether or not mankind wants to believe it.

The Prophet Daniel explained as much, codified as part of inspired Scripture, in this statement he made to the most powerful of world leaders in his day, Nebuchadnezzar, king of Babylon: “… the most High ruleth in the kingdom of men, and giveth it to whomsoever he will, and setteth up over it the basest of men” (Daniel 4:17).

The Apostle Paul supported the same doctrine in the New Testament, in a letter to Church members in Rome—the epicenter of the mighty Roman Empire, even the world, at the time: “Let every soul be subject unto the higher powers. For there is no power but of God: the powers that be are ordained of God” (Romans 13:1).

There is no world leader who doesn’t owe deference to God as the source of his power.

How many heads of nations, not to mention the masses who elect them or otherwise pay them homage, understand this point of truth?

Presidents, prime ministers and kings may contrive great plans, frame elaborate policies, convinced of their own preeminence. Here is how the supreme Creator God describes their schemes: “Why do the heathen rage, and the people imagine a vain thing? The kings of the earth set themselves, and the rulers take counsel together, against the Lord …” (Psalm 2:1-2). And how does God then respond? “He that sitteth in the heavens shall laugh: the Lord shall have them in derision. … [God] shalt break them with a rod of iron; [He] shalt dash them in pieces like a potter’s vessel.

“Be wise now therefore, O ye kings: be instructed, ye judges of the earth. Serve the Lord with fear, and rejoice with trembling” (verses 4, 9-11).

What does God think of democracy? The best answer is that He looks down on any government or leader who refuses to acknowledge His supremacy! God would shower favor and blessings upon a democracy or other government that truly recognized its indebtedness to Him and set its heart to obey Him. But when they don’t, His judgment is rightfully severe.

“Behold, the nations are as a drop of a bucket, and are counted as the small dust of the balance: behold, he taketh up the isles as a very little thing. … All nations before him are as nothing; and they are counted to him less than nothing, and vanity” (Isaiah 40:15, 17).

God “bringeth the princes to nothing; he maketh the judges of the earth as vanity. [He] shall also blow upon them, and they shall wither, and the whirlwind shall take them away as stubble” (verses 23-24). The authorities of this world would be well advised to heed the warnings of this mighty Being who claims indisputable superiority over the greatest of superpowers!

What does this mean for the kingdoms of this world? Will God one day fulfill these threats against them? Or is this so much bluster?

You probably don’t realize it, but the gospel message of Jesus Christ was, at its heart, about this very subject. Christ announced the soon-coming destruction of all human, imperfect, ill-devised governments, to be superseded by one world-ruling Kingdom under God the Father!

The leaders of Christ’s day didn’t pass His declaration off as bluster: They took it very seriously. In fact, they perceived it as a threat against them—a direct challenge to their cherished positions of authority—and they killed Christ for it!

Yes, very soon God will strip all power away from the kingdoms of this world. “And in the days of these kings shall the God of heaven set up a kingdom, which shall never be destroyed: and the kingdom shall not be left to other people, but it shall break in pieces and consume all these kingdoms, and it shall stand for ever” (Daniel 2:44). “And the seventh angel sounded; and there were great voices in heaven, saying, The kingdoms of this world are become the kingdoms of our Lord, and of his Christ; and he shall reign for ever and ever” (Revelation 11:15).

The Kingdom of God will rule the Earth—the very territory now controlled by a teeming multitude of assorted governments. This divinely ruled Kingdom will have all the characteristics of kingdoms today: leaders, administrative bodies, judges, citizens, laws.

So, what system of government will God establish?

Will God govern through “power of the people”? Positively not.

God alone will decide who fulfills the offices in His Kingdom. He will choose those individuals for their obedience to His perfect law, which will be the absolute standard of conduct taught throughout the Kingdom and expected of everyone (Isaiah 2:2-3). He will ensure that they are deeply humble, so He can trust that even with great authority they will always serve the citizens before themselves (Matthew 20:25-27). He will choose those skilled in administering judgment with mercy. They will have rock-solid character and a proven readiness to handle power graciously.

These fundamental, premier qualities of leadership cannot be categorically determined by any of the methods of choosing leaders currently employed. Only God can evaluate with perfect discernment based on perfect criteria.

Thus the myriad of problems we see rampant today will be eliminated. The dangers of democracy will be gone. “And God shall wipe away all tears from their eyes; and there shall be no more death, neither sorrow, nor crying, neither shall there be any more pain: for the former things are passed away” (Revelation 21:4).

There is a perfect government—the government of God.

If you want to know more about this coming government—and your potential part in it—request our free booklet The Wonderful World Tomorrow—What It Will Be Like. Understand and set your heart on the true hope of the gospel—the gospel of the Kingdom of God.

The Wonderful World Tomorrow—What It Will Be Like
You don’t have to believe it! It will happen, regardless. It is sure—the world’s only sure hope. This advance good news of tomorrow is as certain as the rising of tomorrow’s sun. Humanity won’t bring it about—it is going to be done to us. Humanity is going to be forced to be happy—to enjoy world peace—to see universal abundance and joy fill the Earth.
From The November-December 2022 Philadelphia Trumpet
View Issue FREE Subscription
Next
Previous