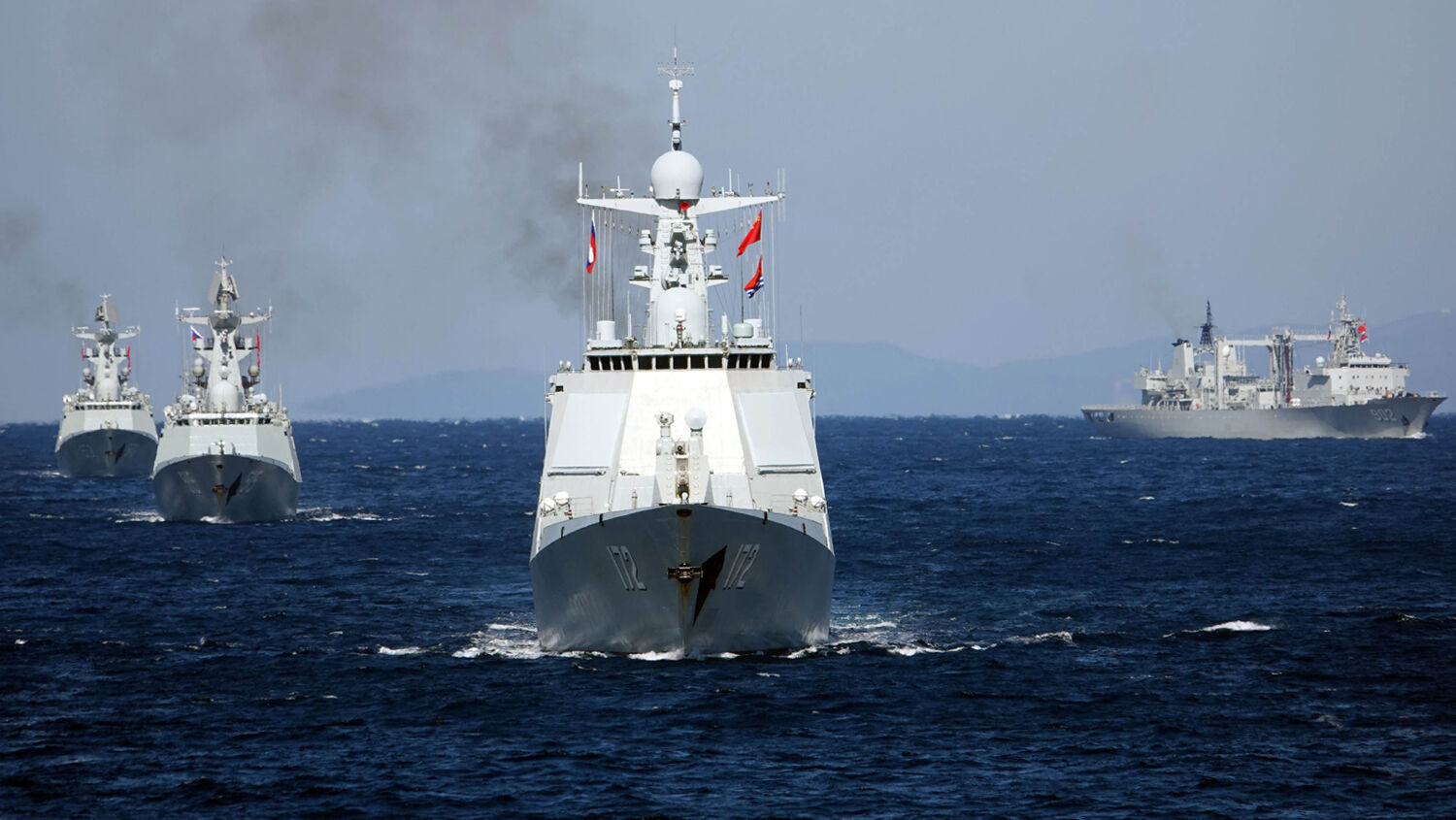 Coming soon to oceans near you.

A United States Coast Guard patrol boat spotted three Chinese and four Russian ships in the Bering Sea on September 19. The ships were “all in a single formation” as they sailed inside the U.S.’s exclusive economic zone, only 86 miles from an Alaskan island. The American crew aboard the U.S. Coast Guard Cutter Kimball monitored the formation of vessels until they dispersed.

The commander of the Coast Guard’s 17th District, Rear Adm. Nathan Moore, said: “While the formation has operated in accordance with international rules and norms, we will meet presence-with-presence to ensure there are no disruptions to U.S. interests in the maritime environment around Alaska.”

Passing through the exclusive economic zone of a foreign country is legal. This zone extends 200 nautical miles past the baseline (or low-water mark) of a nation’s coast. The nation has the right to the resources in this zone, such as fish, oil or wealth beneath the ocean floor. But it does not prohibit foreign ships from sailing in the area. So while the formation of ships was legal, it shows the increasing power, boldness and cohesion of the Chinese and Russian navies.

Controlling the seas has contributed much to America’s power and security over the past century. In 1890, Capt. Alfred Thayer Mahan published The Influence of Sea Power Upon History: 1660–1783. He theorized that the British Empire’s greatness came mainly from one factor: naval might. For the United States to achieve the same level of power, he concluded, we needed a more powerful navy.

This theory educated America’s foreign policy in the following decades. America began building a blue-water navy, capable of operating in open ocean (opposed to a green-water navy, which remains near the coast). President Theodore Roosevelt, who loved Mahan’s theory, commissioned the famous “Great White Fleet.” On Dec. 16, 1907, 16 brilliant white battleships set out to circumnavigate the globe. The message was clear: The U.S. was capable of a powerful presence anywhere in the world.

America’s naval power peaked during World War ii, when the U.S. Navy numbered 6,768 vessels. The number has since dropped, yet America still stands at the top of the world in terms of naval power.

But other nations are catching up.

In 2021, the U.S. Department of Defense released a report to Congress on “Military and Security Developments Involving the People’s Republic of China” (prc). It stated that China’s People’s Liberation Army Navy (plan) has the largest navy in the world numerically, with 355 ships and submarines. (This does not equate to the most powerful navy, which takes into account the size and capability of the ships.) “[T]he plan is an increasingly modern and flexible force,” the report said. “This modernization aligns with the prc’s growing emphasis on the maritime domain and increasing demands for the plan to operate at greater distances from China.”

On July 31 of this year, Russian President Vladimir Putin approved a new maritime doctrine. The document says, “The strategic goals of the national maritime policy are as follows: raising the Navy’s operational (combat) capabilities for ensuring national security of the Russian Federation and protecting its national interests in the world ocean.” The document defines a shift in Russia’s priorities from the Atlantic Ocean to the Arctic and Pacific oceans.

Neither Russia nor China have a navy more powerful than the United States. But they are working towards that goal.

And they are working together.

tass reported the Russian Defense Ministry as saying, “Russian and Chinese Navy officers have been practicing maneuvers using various formations and establishing communication links between the vessels.” The recent sighting of Chinese and Russian ships in formation is more proof of this partnership.

In the May 2006 issue of the Trumpet, late editor Ron Fraser wrote in an article titled “The Coming Siege”:

Already, in step with the biblical prophecy of our times, Russia and China have been making friendly overtures to each other, even conducting joint naval exercises in the South China Sea. The combined navies of China and Russia would present a considerable force to any nation with which one or the other, or both, had a disagreement.

But consider. Japan has the second-largest navy in the world. What if China, Japan and Russia were able to patch up the various differences they have over disputed territory and form a defensive alliance? Japan’s naval might, added to the combined nuclear naval strength of China and Russia, would present a formidable force to the West.

In fact, should these three ally—even for a moment in time—with a united Europe, with all four of them increasingly exploiting controlling interests in various regions of Africa, [they would be] capable of closing down inbound trade to the island nations.

The result? Siege by naval blockade!

Isaiah 23 discusses a trade bloc that will unite the continents of Europe and Asia in this end time. God calls this bloc “a mart of nations” (verse 3). It is a brief alliance between the king of the north (Daniel 11:40) and the kings of the east (Revelation 16:12). Ezekiel 38 lists Russia and China as the leading powers of the kings of the east.

This is why Isaiah’s prophecy of an end-time “mart of nations” that includes both European and Asian powers is so intriguing.

In Deuteronomy 28, God described to ancient Israel the blessings that would come for obedience, and the curses that would come for disobedience. “And he shall besiege thee in all thy gates, until thy high and fenced walls come down, wherein thou trustedst, throughout all thy land: and he shall besiege thee in all thy gates throughout all thy land, which the Lord thy God hath given thee” (verse 52). The gates referred to in this passage are the sea gates that America and Britain once owned. This siege includes a naval blockade. The more Russia and China expand their naval might, the closer we get to the fulfillment of this prophecy.

Ezekiel 4 discusses the same siege, which will last exactly 390 days (verses 4-5). It ends with an attack that brings down America, Britain and the nation of Israel at once (Hosea 5:5). The prophesied siege is drawing ever closer. Will you take action to escape? Mr. Flurry’s books Isaiah’s End-Time Vision and Ezekiel—The End-Time Prophet explain these prophecies in more detail. Request your free copies today.