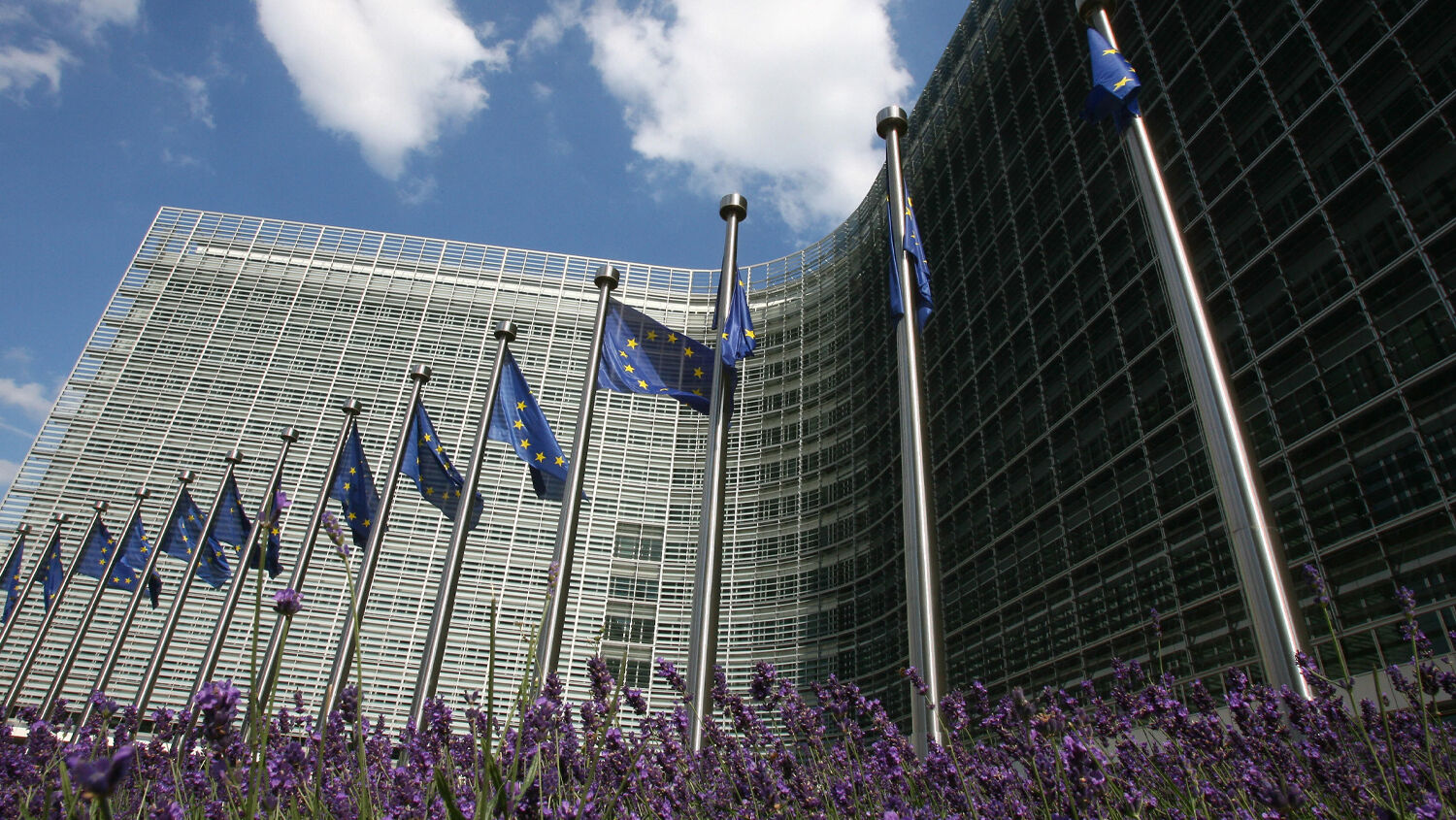 A view of the Berlaymont building, headquarters of the European Commission
DOMINIQUE FAGET/AFP via Getty Images

The covid lockdowns may be gone, but they’re not forgotten.

Remember the covid-19 lockdown? People in the supposedly free Western world, in the name of protecting public health, suffered unprecedented restrictions on personal liberty by their own governments. This was especially apparent in Europe. You couldn’t leave your home except for “essential purposes.” You couldn’t go into a restaurant without giving your name and phone number. You couldn’t board a train without proving your vaccination status. Europe’s flirtations with dictatorship and control over freedom almost felt like a throwback to the Continent’s Communist period.

That all started to change this spring. Vaccine passports were phased out. Borders were opened. Mask mandates were removed. In April, I took a trip to France, which had one of Europe’s most overbearing, in-your-face set of covid restrictions. Yet when I visited, I noticed nothing of the sort. The Champs-Élysées was bustling with car and foot traffic; its businesses and restaurants welcomed visitors. The Louvre had back one of its most iconic sights: the egregiously-long queue packed with foreign tourists snaking around the glass pyramid to get inside.

As I sat next to the canal at the Palace of Versailles one late Sunday afternoon, watching people in rowboats having fun, seeing every square of grass occupied by friends relaxing and enjoying life together, I thought: It’s finally over. We’re finally back to normal. We can forget about the past year’s nightmare and move on.

But not everybody has moved on. Europe’s politicians haven’t forgotten. They are still using the covid era to inform their policymaking. The European Union recently announced a new scheme based on the covid lockdown with far-reaching effects.

The European Commission, the EU’s executive government in Brussels, announced September 19 what it calls the Single Market Emergency Instrument (smei). The EU got a lot of bad coverage during lockdown for its vaccine distribution program. Through bureaucratic inefficiency, issues between member states, and supply mismanagement, Europe’s vaccine rollout was notoriously sluggish. The smei is meant to fix problems like that. In its press release, the commission specifically lists covid-19 as a reason for smei’s introduction.

The scheme is still only a proposal. It needs to be accepted by all 27 EU member states. But if accepted as is, the Single Market Emergency Instrument would have four main components:

The purpose for the advisory group is straightforward: advise the commission on whether a crisis would warrant the other proposed mechanisms. The “framework for contingency planning” would prepare for a crisis through training member state officials, establishing early warning systems, and other means. “Vigilance mode,” meanwhile, means the commission would identify “goods for which reserves may be necessary” and start coordinating the supply of such reserves with member states. It would also require member states to monitor supply lines of “strategically important goods and services.”

What about “emergency mode”?

According to the press release, “emergency mode can be activated in cases of a wide-ranging impact of a crisis on the single market that severely disrupts free movement on the single market or the function of the supply chains that are indispensable for societal and economic activities.”

The press release’s excessive legalese obscures “emergency mode’s” far-reaching effects. In layman’s terms, the European Commission could take over the operations of private businesses and even national economies. When activated, the smei would let the commission control the production and distribution of certain products. It would ban member states from enacting export bans against each other.

The smei gives the Commission transformative power over Europe’s economy. Brussels could change the EU from a market economy to a government-controlled one. Command economies were the style of economies formerly found in Communist Eastern Europe.

In short, the Single Market Emergency Instrument would make the European Union look more like the Soviet Union.

The press release even admits the smei creates a command economy, albeit underhandedly. “In normal times,” it reads, “where no sudden event is likely to have severe disruptive effects on the single market, market forces ensure the functioning of businesses and of the single market.” But if conditions are not “normal,” Brussels can override the market and take control.

Not mentioned in the press release are the punishments for noncompliant businesses. According to Reuters, which saw a leaked document relating to the proposal, companies that “provide incorrect or misleading information” can be fined up to €300,000 (us$292,737). Businesses that refuse to follow Brussels’s directives could face “daily periodic penalty payments of 1.5 percent of the average daily turnover.”

It is normal for governments during crises to exert more economic control. In a separate press release, the EU cites similar programs it used as inspiration. These include government schemes in Japan, South Korea and the United States.

Japan, South Korea and the U.S. are all sovereign states. They’re all independent countries with democratically elected governments. The EU is not a sovereign country. It is a union of sovereign countries under a common economic-political structure. And the European Commission is not democratically elected. The smei amounts to nothing less than a European Commission power grab. Brussels is using covid-19 to take power away from the EU’s national governments.

The press release cites the covid-19 crisis as an example of the type of crisis needed to activate the Single Market Emergency Instrument. If the smei had existed during covid lockdown, the press release states, “it would have provided for fast reactions and response to measures such as intra-EU export restrictions for personal protective equipment such as masks and gloves.”

If objects as everyday as masks and gloves can qualify as “crisis-relevant goods,” anything can qualify. This isn’t about protecting access to life-saving medicines or weapons against a Russian invasion. It’s about creating a centralized European economy controlled from Brussels rather than the member states’ national capitals.

European Commission Executive Vice President Margarethe Vestager said in a speech regarding the smei: “The covid-19 crisis showed us our single market isn’t perfect. It is strong, but not unbreakable. … We need to make it stronger.”

The smei would certainly make the commission’s power over the EU stronger. According to Vestager, this is what is needed to help “perfect” the European project.

It remains to be seen if the Single Market Emergency Instrument will actually be enacted and in what form. It needs the approval of all 27 EU member states to get off the ground. Representatives from the national governments gathered September 29 to debate the project. Many—including influential members like Germany and the Netherlands—had reservations. The commission may have to make some concessions and water the smei down to make it a reality. But the proposal at the very least shows the direction the commission wants to take the EU. The current proposal could get vetoed. The commission will most likely look for a different excuse to ask for the same powers under a different name in the future.

Jean Monnet, an EU “founding father,” said that “Europe will be forged in crisis and will be the sum of the solutions adopted for those crises.” The covid-19 lockdowns were one of these crises. It was a man-made crisis; nobody forced member states to shut down their economies (and not all of them did). But Brussels is still using this crisis to forge a strong, powerful, centralized Europe. Even after everybody else is trying to move on from it.

“One of the most important effects of the global panic over covid-19 has been almost overlooked,” Trumpet editor in chief Gerald Flurry wrote in the July 2020 Trumpet issue. “Europe’s response to the pandemic is accelerating the fulfillment of one of the most crucial end-time prophecies of your Bible!”

The prophecy he referred to can be found in Revelation 17. The prophecy features “a scarlet coloured beast,” biblical symbolism for an empire (verse 3; Daniel 7). A related prophecy shows this beast has “power … over all kindreds, and tongues, and nations” (Revelation 13:7). This beast has so much power that “all that dwell upon the earth shall worship [it]” (verse 8). Tying in Revelation chapters 13 and 17 with Daniel chapters 2 and 7 show this beast to be the Roman Empire. (Please request a free copy of Who or What Is the Prophetic Beast?, by Herbert W. Armstrong, for more information.)

Ancient Rome fell ages ago. But Revelation 17 mentions this “beast” would be on the scene at the Second Coming of Jesus Christ (verse 14), a future event. How does this relate to the present?

There is one wrinkle in the prophecy. The beast of Revelation 17 is ridden by a woman (verse 3). In Bible prophecy, a woman is a symbol for a church (2 Corinthians 11:1-3; Ephesians 5:22-32). This is not speaking of the old Roman Empire. Rather, a church-state combine that has risen repeatedly to resurrect ancient Rome: the Holy Roman Empire.

History records six such resurrections. Each time, it has wreaked havoc on the world. But the Bible prophesies of seven consecutive resurrections (Revelation 17:10). That means there is one more yet to come. Revelation 17 states that this last resurrection would be composed of 10 separate countries pooling their resources together in one big union (verses 12-13).

That union is taking shape in the form of the EU right now. And covid-19 is helping Europe do so—even after the end of lockdown.

“The Bible says 10 kings will rise in Europe in this end time,” Mr. Flurry wrote, “led by one overarching strongman. These kings will form the Holy Roman Empire. The coronavirus pandemic is helping usher in these 10 kings!”

Mr. Flurry focused on how the covid-19 crisis transformed national governments to take more dictatorial measures. But the same can be said about the European Commission and the EU at large. And while many national governments have stopped using covid as a pretext for a power grab, Brussels is doubling down.

What happens when Europe’s crisis-fueled transformation is complete? If the last resurrections of this empire—resurrections that featured such bloody men as Charlemagne, Napoleon Bonaparte and Adolf Hitler—mean anything, it won’t be pretty.

Mr. Flurry wrote: “This coming empire will affect your life directly. Its arrival will shock every nation on Earth as no power has in modern times. This is the paramount prophecy of the end time.”