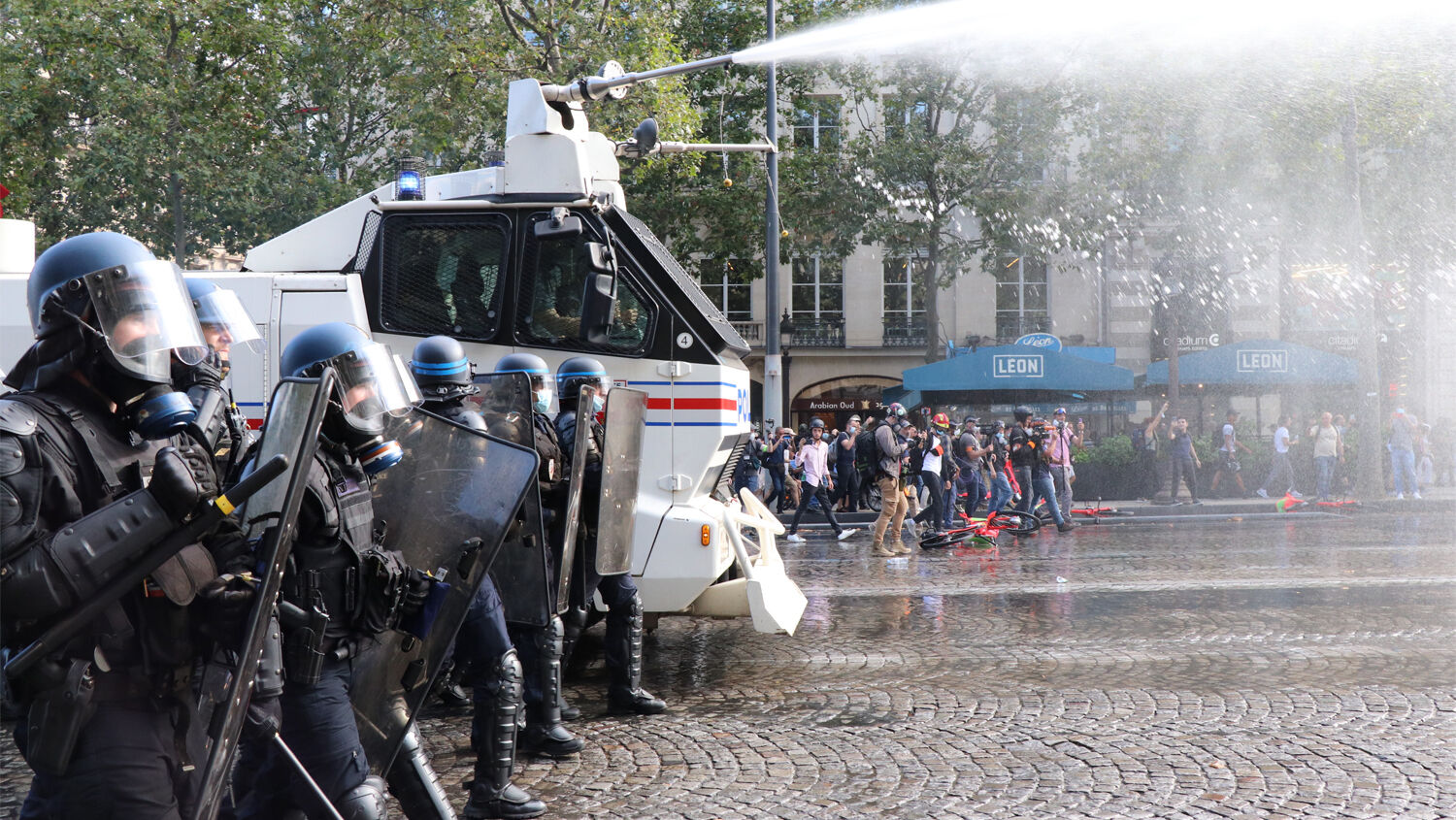 Riot police use a water cannon to disperse French demonstrators as protests against vaccines and the government’s new health pass requirement continue for the second week in Paris.
Alaattin Dogru/Anadolu Agency via Getty Images

We have entered a new era in Europe that will result in increasingly dictatorial governments.

France’s Parliament adopted new legislation on Monday, July 26, that enforces mandatory vaccine passports. The new law is meant to push people to take the vaccine by making day-to-day life burdensome for the unvaccinated. On July 24, more than 160,000 people participated in protests across France. But their calls for liberty were ignored. During the coronavirus crisis, France’s national motto, “Liberté, égalité, fraternité,” has been forgotten.

In April, French President Emmanuel Macron said a covid-19 pass “will never be a right of entry that differentiates between French people.” Health Minister Olivier Véran said that France has “a passion for equality” and that it was “almost inconceivable that when places reopen, they will not reopen to everyone.”

Yet last week, Macron said proof of full vaccination or a negative test would be necessary to enter venues for entertainment purposes and even bars and restaurants. France 24 wrote: “The announcement was a move by Macron to make vaccinations the top weapon against covid-19 as new variants emerge, essentially requiring people to become vaccinated if they want to continue daily routines.” Starting August 1, the vaccine passport will be required to allow entry into restaurants, bars and other gathering places. That means if you are an unvaccinated restaurant-goer you either get used to burdensome and costly covid tests or you change your lifestyle and cook at home. By September 15, health-care workers need to either be vaccinated or find a different profession.

“Despite the show of anger in the streets, President Emmanuel Macron stands on firm political ground on this issue,” gerzo media noted. Surveys also reveal that most in France favor the new law. Within 48 hours of Macron’s speech, 2.2 million people scheduled their vaccine. Now that the law is official, more and more will be pressured into following the government’s demand.

The Spectator wrote: “This was undoubtedly the most authoritarian speech delivered by a French president in decades, but wrapped in a nakedly political pitch for five more years.”

This authoritarian trend could soon spread globally. Fortune headlined, “Europe Shows U.S. What Measures May Come Next in COVID-19 Fight.”

While ignoring the health risks related to the vaccine, the government is trying to force its will on the people. People are forced to take the vaccine, not because they fear infection but because they want to be part of society. Some do it to not lose their job; others because they don’t want to be shunned by their friends. Others, of course, are convinced by the so-called science the media is pushing.

“One of the most important effects of the global panic over covid-19 has been almost overlooked,” Mr. Flurry wrote. “Europe’s response to the pandemic is accelerating the fulfillment of one of the most crucial end-time prophecies of your Bible! The coronavirus is hastening the arrival of the prophesied Holy Roman Empire. … Europe’s response to covid-19 has set the stage for dictators to rise.”

We are seeing more and more how European governments seek to exploit the crisis at hand. People who refuse to submit to their solution are coming under increasing pressure. We can expect more and more crises and more and more extreme measures from Europe. To understand where it will lead, read Mr. Flurry’s article “Coronavirus and the Holy Roman Empire.”