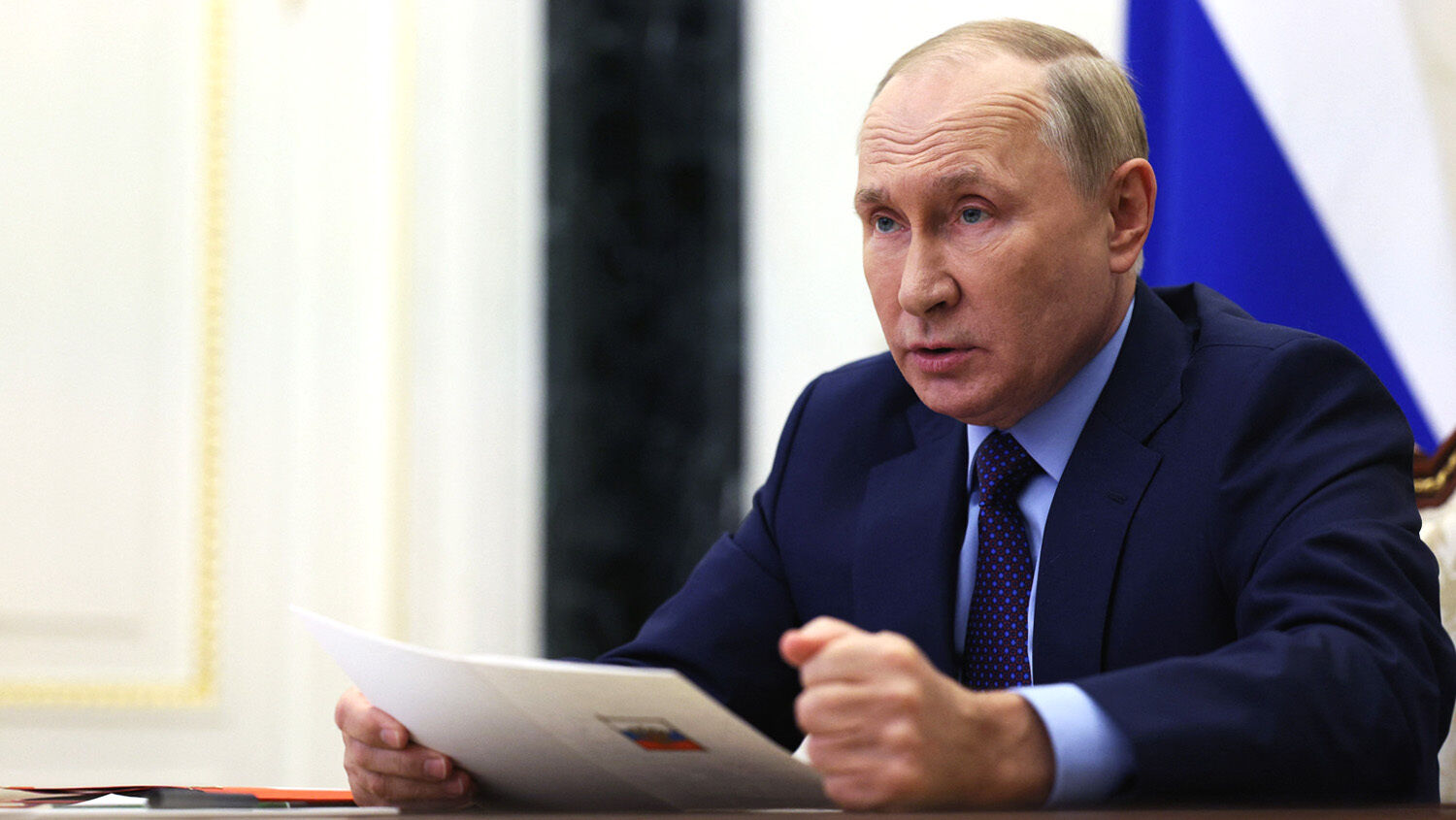 A sign that Russia’s war against Ukraine will escalate

Russian President Vladimir Putin threatened on September 21 to use “all means necessary” to achieve Moscow’s aims against Ukraine, even mentioning nuclear strikes, and ordered a “partial mobilization” of Russian reserve forces. The moves show that Putin is prepared to dramatically escalate the war in order to achieve his dark ambitions.

“In the event of a threat to the territorial integrity of our country and to defend Russia and our people, we will certainly make use of all weapon systems available to us,” Putin said in a rare prerecorded speech to his nation. And it should be noted that the speech came just one day after a plan was put in place to make the eastern Ukrainian regions of Donetsk and Luhansk official parts of Russian territory, which might be concluded in a matter of days. This means any military action in those regions could soon be labeled by Putin as an attack on Russia itself and met with some of Russia’s most lethal weaponry. “This is not a bluff,” Putin added. “Those trying to blackmail us with nuclear weapons should know that the tables can turn on them.”

Regarding the mobilization, Putin said it would be on a limited scale: “[O]nly military reservists, primarily those who served in the armed forces and have specific military occupational specialties and corresponding experience, will be called up.”

The order represents the first call-up in Russia since World War ii, and it means 300,000 reservists will be sent immediately to Ukraine.

The measure has prompted a new exodus of military-aged Russians and triggered waves of protests in parts of the nation.

#Moscow they say this is a 35km queue at the Finland #Russian border leaving to avoid conscription no appetite to fight in #Ukraine for a President that’s lost the plot. For those who can’t escape military service it will all end in tears. #Russia #Putin #UkraineRussiaWar pic.twitter.com/wSl3MvpEEJ

Putin’s address comes after weeks of humiliating defeats for Russian forces as Ukraine’s military has reclaimed some 2,300 square miles of territory that Russia previously controlled and pushed the occupiers all the way back to the border. The speech is viewed as Putin’s starkest admission yet that the war is not going according to plan. But it should not be seen as evidence that Russia will lose.

The fact is, Putin cannot afford to lose the war. His missteps in Ukraine have already given some nations in Russia’s orbit—Georgia, Azerbaijan, Tajikistan, Kyrgyzstan and Kazakhstan—a sense that Russia is weakened and that they are now free to push against it. The leadership of these countries smell blood. And Putin understands that if he doesn’t turn the situation around, his power over Russia’s borderlands will vanish and his position in the Kremlin will come under serious threat.

For Putin’s 22 years at the helm of Russia, he has postured the nation as a ferocious military power—second only to the United States. He has portrayed the nation as a resurgent juggernaut that instills fear and alters the power balance in any theater it enters. He has tried to paint it as a rising superpower that will soon be able to stand up—alongside its partners—to the United States. To achieve anything less than victory in Ukraine would bring all of this crashing down. It would be a humiliating loss of face for Putin and would showcase Russia as a failure in the one area where it professes to be nearly untouchable: military power.

Putin has put a stunning amount on the line with this war. It is true that the Ukrainians are resisting more formidably than was expected and that their counteroffensive has surpassed all expectations. But Putin’s speech and new moves show this his gloves may be about to come off.

Whatever happens in the near term, the Trumpet believes Vladimir Putin will survive the current crises and prevail. This is because of evidence in the world’s most reliable geopolitical authority: the Holy Bible.

It may be easy for some to scoff at such a statement, but consider the Bible’s track record in forecasting major geopolitical events. Scripture foretold the rise and fall of the Babylonian Empire, the Persian Empire, the Greco-Macedonian Empire and several iterations of the Roman Empire. Then, years after those scriptures were written, all these kingdoms rose and then crumbled exactly how the Bible said they would.

In the case of the Greco-Macedonian Empire, the Bible even prophesied the key role that would be played by one individual: Alexander the Great. Passages in the book of Daniel foretold—some 200 years before he was even born—Alexander’s rule, his conquests and his sudden demise. (For a full explanation, request a copy of our free booklet History and Prophecy of the Middle East.) Alexander was shown the scriptures that had foretold his rule, and he believed that he did, in fact, fulfill the prophecies. First-century historian Josephus recorded the event, which happened when Alexander visited Jerusalem and met with the high priest. “And when the book of Daniel was shewed him, wherein Daniel declared that one of the Greeks should destroy the empire of the Persians, he [Alexander] supposed that himself was the person intended; and as he was then glad, he dismissed the multitude for the present …” (Antiquities of the Jews, Book 11, Chapter 8, Section 5).

Alexander the Great is not the only history-altering individual whose impact was prophesied by Bible writers. Among the others are King Josiah of Judah, King Cyrus of Persia and even British Prime Minister Winston Churchill. All were prophesied to come on the scene generations before they were born.

And there is another important individual whose appearance was also foretold in the Scriptures: Vladimir Putin.

Around the year a.d. 90, the Apostle John recorded a stunning prophecy: “And the number of the army of the horsemen were two hundred thousand thousand: and I heard the number of them” (Revelation 9:16). That is describing an army of 200 million men—an army far larger than any ever assembled in human history.

The Bible provides several details about this colossal force. Revelation 16:12 calls it the “kings of the east,” which shows it to be a group of several Asian nations. Daniel 11:44 and 12:1 make clear that this alliance will be one of the main belligerents in a nuclear World War iii. And Ezekiel 38 reveals that this bloc will have one lead nation—and one individual at the helm.

Verses 1 and 2 state: “And the word of the Lord came unto me, saying, ‘Son of man, set thy face unto Gog, of the land of Magog, prince of Rosh, Meshech, and Tubal, and prophesy concerning him” (King James Version and Young’s Literal Translation). Rosh was the ancient name of Russia, once called Rus. Many encyclopedias and commentaries (such as the Jamieson, Fausset and Brown Commentary) recognize this.

The passage goes on to discuss the conquests of the mighty army led by this “prince of Rosh, Meshech, and Tubal.” It also discusses the army’s eventual defeat. So, who is this mighty prince? In the September 2014 Trumpet, editor in chief Gerald Flurry wrote:

By the time he wrote The Prophesied ‘Prince of Russia’ in 2017, Mr. Flurry was even more certain that Putin would personally fulfill this role. “His track record, his nationality and his ideology show that he is fulfilling a linchpin Bible prophecy,” he writes. “The time frame of his rule also shows that nobody else could be fulfilling the Ezekiel 38 and 39 prophecy.”

Since the Trumpet has this understanding of Putin’s role in end-time prophecy, we believe he will do whatever it takes to succeed in Ukraine—even if that means some sort of Hail Mary that makes the war far uglier than it has been up until now.

It is clear that the future for Russia, Ukraine and the world is growing darker. But Mr. Flurry says the fact that this “prince of Russia” is now in power shows that the most hope-filled event in mankind’s history is now close. “Vladimir Putin is a sign, literally a sign, that Jesus Christ is about to return!” he writes in his booklet. “This is one of the most inspiring messages in the Bible. What we are seeing in Russia ultimately leads to the transition from man ruling man to God ruling man!”