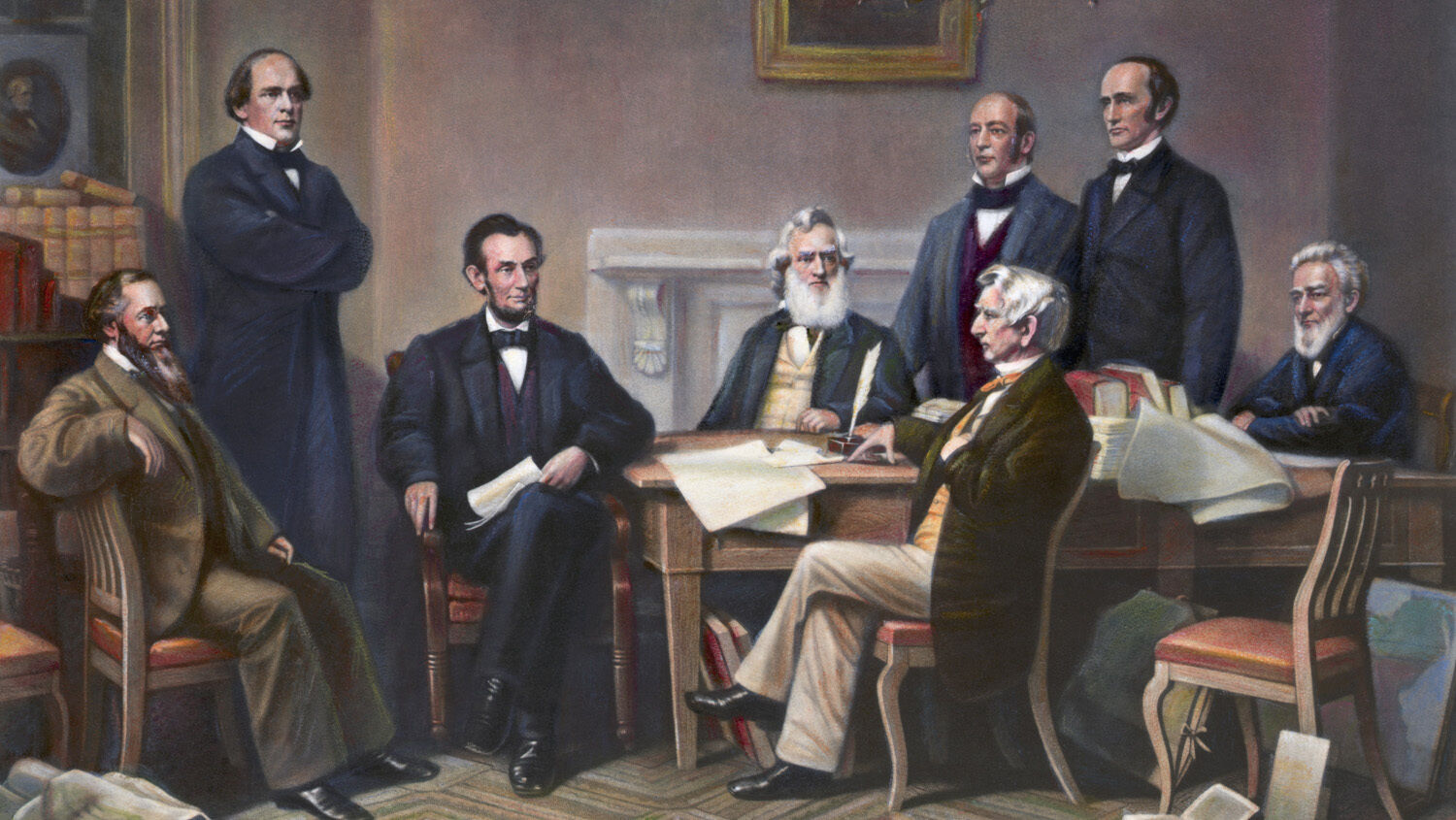 Abraham Lincoln reads the Emancipation Proclamation before his cabinet.

The courageous step that enshrined the Union in freedom

Slavery had torn the United States apart. For decades the nation was bitterly divided on the issue. The North was anti-slavery. The pro-slavery South was economically dependent on slaves to harvest the cotton crop. Many central states were undecided on the issue. The uneasy compromise between the two sides collapsed soon after Abraham Lincoln was elected president of the United States in 1860. As America descended into civil war, it threatened to destroy the vision of freedom the founders had embarked on only 80 years earlier.

The storm of war that faced President Lincoln would have crushed any other man. It was an act of divine providence that Lincoln’s steady hands were steering the ship of state through the violent and tumultuous war years. Lincoln understood his imperative duty as president was to save the Union from becoming a fractured continent of warring nations. The Union must be preserved with or without slavery, at all costs.

At the lowest point of the war, Lincoln’s mind changed on the future of slavery in the republic. This change not only turned the tide of the war in favor of the North, it also saved the Constitution. This change conceived a new birth of freedom for America and the world.

On Sept. 22, 1862, President Abraham Lincoln unveiled the Emancipation Proclamation to the world for the first time. Today is the 160th anniversary of this momentous event. This history illustrates several important lessons for a United States that once again is facing an existential crisis. It also reveals God’s miraculous hand in the course of world affairs and His plan for mankind’s future.

A Summer of Disaster

The year 1862 was a series of military disasters for the Army of the Potomac. While Gen. Ulysses S. Grant won some victories in the west, Gen. George B. McClellan failed to deliver on many promises of victory to President Lincoln in the east. At the Battle of Seven Pines and the Seven Days Battle, the numerically superior Northern Army was defeated by the Army of Northern Virginia led by Gen. Robert E. Lee. It was a hot summer for the North, literally and militarily.

It was in the context of these disasters that Lincoln began considering emancipation. “While Washington sweltered through the long, hot summer, Lincoln made the momentous decision on emancipation that would define both his presidency and the course of the Civil War,” writes Doris Kearns Goodwin in Team of Rivals. “For Lincoln, the problem of slavery was not an abstract issue. While he concurred with the most passionate abolitionists that slavery was ‘a moral, a social and a political wrong,’ as president, he could not ignore the constitutional protection of the institution where it already existed.”

At this pivotal moment in history, the Constitution protected slavery. The infamous 1857 Dredd Scott v. Sanford case had enshrined slavery protection in the Constitution. Dred Scott was a slave in Missouri. His owner took him on a trip to Illinois, which was a free state. Scott then filed a lawsuit for his freedom since he was a slave in a state where slavery was illegal. The Supreme Court was dominated by Southern Democrats who used this opportunity to invent the right of slavery by improperly using the due process clause in the Fifth Amendment. This handcuffed President Lincoln from using executive power to end slavery.

Congress possessed the power to abolish slavery in federally regulated areas, but the states possessed the power to abolish slavery completely from society. For years, no agreement could be made whether to emancipate slaves in border states, in rebel states or in the whole country. Lincoln was walking a tightrope trying to unite all of the different factions into a unified movement.

However, defeat proved to be an open door. Military intelligence reports informed the president that the Confederacy was using slaves in a military capacity, moving slavery under the purview of military operations. Goodwin writes that this point in the war, when “extraordinary means were necessary to save the Union, gave Lincoln an opening to deal more directly with slavery. … Seen in this light, emancipation could be considered a military necessity, a legitimate exercise of the president’s constitutional war powers. The border states had refused his idea of compensated emancipation as a voluntary first step, insisting that any such action should be initiated in the slave states. A historic decision was taking shape in Lincoln’s mind.”

Lincoln realized, as Goodwin wrote, “the constitutional protection of slavery could and would be overridden by the constitutionally sanctioned war powers of the president.” In July, the president presented the first draft of the Emancipation Proclamation to his cabinet. Lincoln was firmly resolved to move forward with the proclamation, only accepting the suggestion of William Seward, the secretary of state, that he wait until a military victory.

On September 19, at the Battle of Antietam, the Union army gave Lincoln the long-awaited victory he needed to issue the proclamation.

Linking Freedom to the Future

Lincoln convened his cabinet on September 22 to reveal the decision. Just before reading through the proclamation, Lincoln revealed that he had sworn to himself, and to Almighty God. Gideon Welles recalled: “There were occasions when, uncertain on how to proceed, he had in this way submitted the disposal of the subject to a Higher Power, and abided by what seemed the Supreme Will.” The Emancipation Proclamation did not contain eloquent flourishes, but was more of a legal brief on the Constitution. It read in part:

That on the first day of January, in the year of our Lord one thousand eight hundred and sixty-three, all persons held as slaves within any state or designated part of a state, the people whereof shall then be in rebellion against the United States, shall be then, thenceforward, and forever free; and the Executive Government of the United States, including the military and naval authority thereof, will recognize and maintain the freedom of such persons, and will do no act or acts to repress such persons, or any of them, in any efforts they may make for their actual freedom. …

And upon this act, sincerely believed to be an act of justice, warranted by the Constitution, upon military necessity, I invoke the considerate judgment of mankind, and the gracious favor of Almighty God.

The Emancipation Proclamation was limited to freeing 3.5 million slaves in the rebellious states. Any remaining slaves in the North or border states were not yet free. Yet this was the all important first step to permanent, universal abolition. It also completely changed the outlook of the war: Instead of fighting for the preservation of the Union, the North was now fighting to end slavery. The act would take effect on Jan. 1, 1863.

Yet the most important role the Emancipation Proclamation played was in healing the Constitution. It was important that Lincoln used a constitutionally legal method to emancipate the slaves because it removed doubts of illegitimacy or rejection in the future. The Constitution had been stained and abused to achieve the exact opposite of what the Founders intended. The Declaration of Independence said that “all men are created equal.” The Emancipation Proclamation was the vehicle Lincoln used to restore the link between the Declaration and the Constitution.

Trumpet editor in chief Gerald Flurry wrote in “Lincoln’s Fight for True Freedom”: “Lincoln linked the Declaration of Independence to the Constitution and showed an unbreakable connection between the two. Without the Declaration, there would be no Constitution. And the Constitution was crafted to realize the ideals articulated in the Declaration.” Lincoln articulated this connection at the Gettysburg Address in 1863, which would not have been possible without the Emancipation Proclamation. “Quoting the Declaration of Independence cut a lot deeper in 1863 than before because that supported the Emancipation Proclamation, which Lincoln had passed on January 1 of that year,” Mr. Flurry continued. “This declared some 3.5 million slaves in the Confederate states to be free. That changed the character of the whole war.”

Without restoring the link between the Declaration and the Constitution, many of the freedoms we enjoy today would have been compromised. What Lincoln expressed in the Emancipation Proclamation helped shape the 13th, 14th and 15th Amendments in the Constitution which outlawed slavery. Following the North’s victory, all rebel states had to ratify these amendments to rejoin the Union. Lincoln’s courage, vision and faith in God allowed America to enjoy a “new birth of freedom” and ensure all men were equal in the republic.

The Emancipation of the World

It is no coincidence that following the Emancipation Proclamation the tide of the war turned against the Confederacy. Only a few months later both the battles at Gettysburg and Vicksburg gave the North a decisive advantage, and Lincoln finally found in Ulysses Grant a general who would fight. As Lincoln expressed in his Second Inaugural Address, slavery was a sin against God, and the Civil War was a curse being inflicted on the nation because they had turned away from God. “Lincoln labeled slavery a terrible offense that had brought the nation justly deserved woe, permitted by the ‘living God’,” wrote Mr. Flurry.

The Almighty God certainly intervened and used Lincoln, combined with many other miracles, to save the Union and prepare America for its destiny as a superpower. As Herbert W. Armstrong explained in The United States and Britain in Prophecy, America was prophesied to become the single greatest nation on Earth. This could not have happened if the North lost the war.

Yet there remains a profound lesson in this history for us now. The United States is suffering a loss of freedom from a tyrannical government and a radical left movement that is destroying the Constitution. Both the Civil War and the crisis America faces now, share the same cause: forgetting and rebelling against God. This rebellion and sin is actually a form of spiritual slavery. The Great God has a master plan of spiritual emancipation to liberate mankind from this spiritual slavery and end forever the curses of tyranny, unhappiness and misery.

Thankfully, God is about to stop slavery forever! It is biblical that all men are created equal. That is the law of God—the very love of God! God is enacting a plan to bring about a new birth of freedom for all mankind who have ever lived. That is His promise in Scripture. You can read about it in our free booklet The Wonderful World Tomorrow—What It Will Be Like. God is about to establish a government that truly is for the people, and which shall not perish from the Earth. That is quite a vision!

This 160-year anniversary can connect you to this inspiring future. The return of Jesus Christ is coming very soon, and that is the event that will usher in worldwide, spiritual and eternal emancipation to the entire world. To learn more, please read “Lincoln’s Fight for True Freedom.”