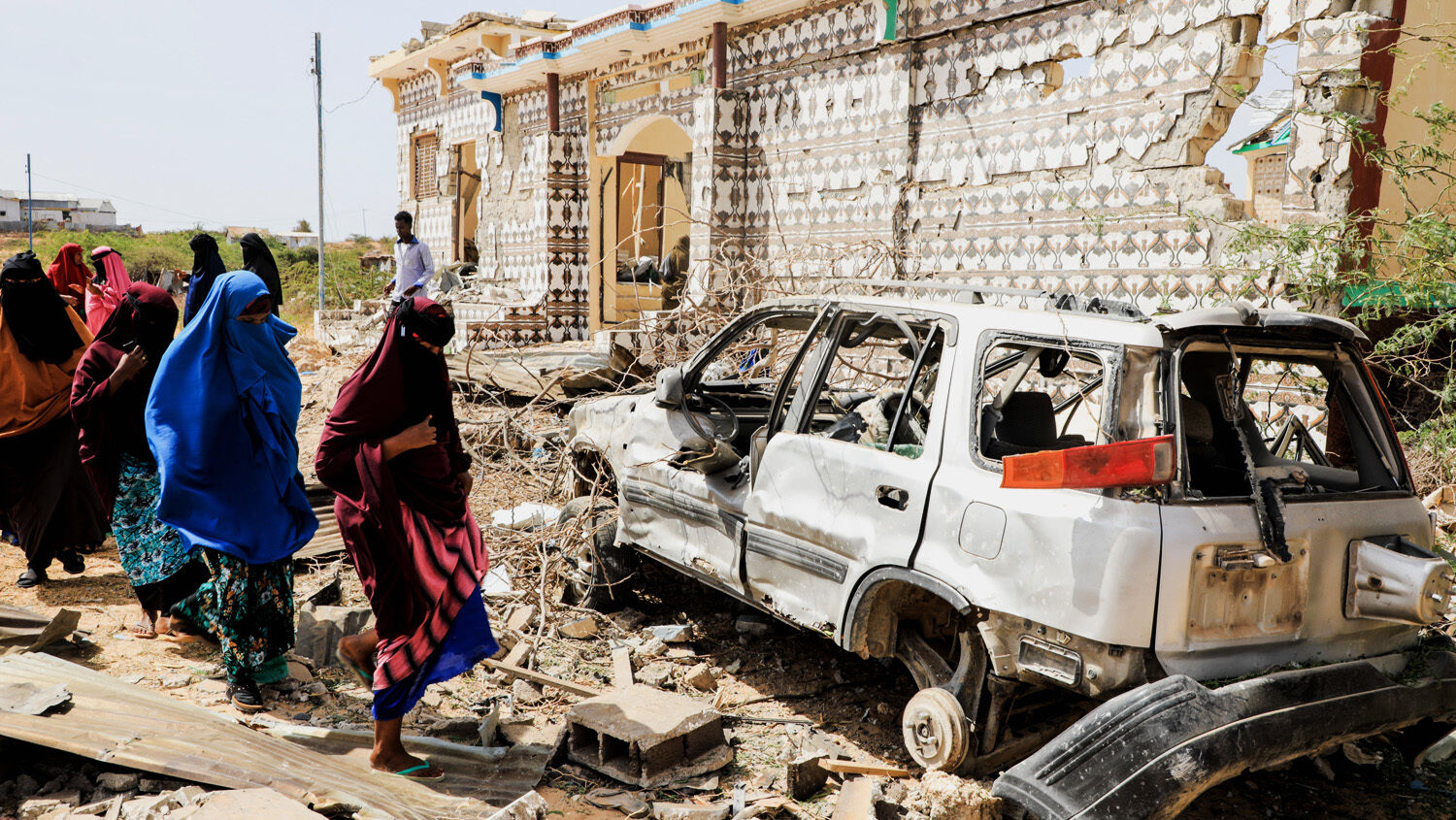 A house and car are destroyed by an explosion provoked by al-Shabaab militants on the outskirts of Mogadishu, Somalia, on February 16.
HASSAN ALI ELMI/AFP via Getty Images

The African terrorist group al-Shabaab launched a large-scale incursion in Ethiopia in late July. The militants crossed the Ethiopian border on July 21. They reached Ethiopia’s Somali state and captured the town of Hulhul. After a three-day battle with Ethiopian security forces, al-Shabaab retreated. The militants were detected elsewhere in Ethiopia, including the settlements of El Kari, Jaraati and Imey.

Al-Shabaab was founded roughly 15 years ago. The group is active mainly in Somalia and controls large swaths of the country. But it is active all over East Africa. In 2010, al-Shabaab carried out a deadly terrorist attack in Uganda, killing 74 people. It also has a sizable influence in Kenya. It claimed responsibility for the infamous 2013 Nairobi shopping mall attack. Recent reports suggest al-Shabaab is massively increasing its influence in Kenya. It is now expanding operations in Ethiopia.

Al-Shabaab didn’t use only Somali militants for the raid. The terrorist group has “several thousand fighters” in its “Ethiopian command,” according to the Associated Press. These are divisions composed of Ethiopians, mainly ethnic Somalis and Oromo.

The assault came after two Somali towns on the Ethiopian border were attacked. The towns of Aato and Yeet were hosting Ethiopian troops in Somalia as peacekeepers. Photos released by al-Shabaab showed the Ethiopian bases in both towns destroyed.

This is no small issue. Ethiopia has Africa’s second-biggest population with well over 100 million people. Addis Ababa, the capital city, is the headquarters of the African Union intergovernmental organization. The country controls one of the two major sources of the Nile River. Ethiopia is an influential country.

Ethiopia rarely sees this kind of large-scale Islamist attack. But that doesn’t mean it is a stranger to fighting al-Shabaab. Ethiopia is a major contributor of peacekeeping forces against al-Shabaab in Somalia.

Al-Shabaab has one particular old score to settle with Addis Ababa. In June 2006, the terrorist group took over Mogadishu, Somalia’s capital. Later that year, Ethiopia invaded and forced the terrorists out of the city. This was a turning point. “The intervention,” the Council on Foreign Relations wrote, “which came at the request of Somalia’s transitional government, radicalized [al-Shabaab], analysts say. … [Al-Shabaab] retreated to the south, where it began organizing guerrilla assaults, including bombings and assassinations, on Ethiopian forces. Some experts say it was during these years that the group morphed into a full-fledged insurgency, gaining control over large pieces of territory in central and southern Somalia.”

It looks like al-Shabaab is now bringing the fight home.

While attacks like this are rare, al-Shabaab has had a presence within Ethiopia for some time. In April, the Ethiopian government announced the arrests of 34 al-Shabaab members “making preparations to carry out a terrorist attack in Addis Ababa and various parts of the country.”

Two noteworthy circumstances complicate things. The first is that Ethiopia is in the midst of a civil war. For almost two years now, Addis Ababa has been in a civil war with the Tigray Defense Forces representing the Tigray region. The fighting has been focused mainly in Ethiopia’s north—where Tigray is located, but the war is causing chaos throughout Ethiopia.

The war is complicated by the involvement of the Oromo Liberation Army, a militia representing the Oromo ethnic group—the same group al-Shabaab recruits from. They are fighting with the Tigray against the Ethiopian government. The Oromo are mostly Muslim.

The second circumstance is the involvement of outside actors. Al-Shabaab is usually classified as an al Qaeda affiliate. But it is also a recipient of heavy Iranian sponsorship. Iran and its proxies have a growing presence in Africa. Iran supplies al-Shabaab with money and weapons; in exchange, al-Shabaab helps Iran smuggle weapons to its Houthi proxies in Yemen and oil to the rest of Africa to skirt United States sanctions. The U.S. military also has a sizable presence in Somalia. Sponsoring al-Shabaab attacks on American targets allows Iran to attack the U.S. without being directly culpable.

Influence from such groups as al Qaeda is bad enough, but Iranian involvement is a whole other issue. Tehran has the economy of a powerful state behind its terrorist sponsorship. And the Iranian government has a successful track record in controlling radical puppet regimes in foreign territories: Hamas in Gaza and the Taliban in Afghanistan are two major examples. Iran also has its political tentacles extending into Iraq, Syria, Lebanon and other areas.

One of Iran’s main goals is to create an Islamist proxy empire throughout the Middle East and Africa. Al-Shabaab is part of the strategy. The cross-border attack suggests that al-Shabaab and, by extension, Iran aren’t interested in Somalia alone.

The Trumpet bases its analysis of Africa’s war on terror on a prophecy in the book of Daniel. “And at the time of the end shall the king of the south push at him [the king of the north]: and the king of the north shall come against him like a whirlwind, with chariots, and with horsemen, and with many ships; and he shall enter into the countries, and shall overflow and pass over. … He shall stretch forth his hand also upon the countries: and the land of Egypt shall not escape. But he shall have power over the treasures of gold and of silver, and over all the precious things of Egypt: and the Libyans and the Ethiopians shall be at his steps” (Daniel 11:40, 42-43).

This prophecy is dated to the “time of the end”—our time today. The cast of characters features a European “king of the north” attacking a “king of the south”—radical Islam led by Iran. (For proof of these identities, read our free booklet The King of the South.) This European empire will invade Egypt, Libya and Ethiopia. The implication is that these three powers will be allied with the king of the north’s enemy, Iran-led radical Islam.

Ethiopia is a Christian-majority country. It may have looked unlikely for radical Islam to gain a foothold several years ago. The Trumpet’s coverage over the years has been considered controversial by many. But Ethiopia’s civil war has thrown the country into turmoil. Iran-backed al-Shabaab, which already controls sizable territories in neighboring Somalia, has an old score to settle with Ethiopia. It sees the chaos across the border and is getting bold enough to stage its own invasions. And it is recruiting Ethiopian jihadists to do so.

More and more, our most controversial forecast is proving true.

To learn more, please read “Is Ethiopia’s Civil War in End-Time Prophecy?” Also request a free copy of The King of the South to better understand Iran’s role in Bible prophecy.