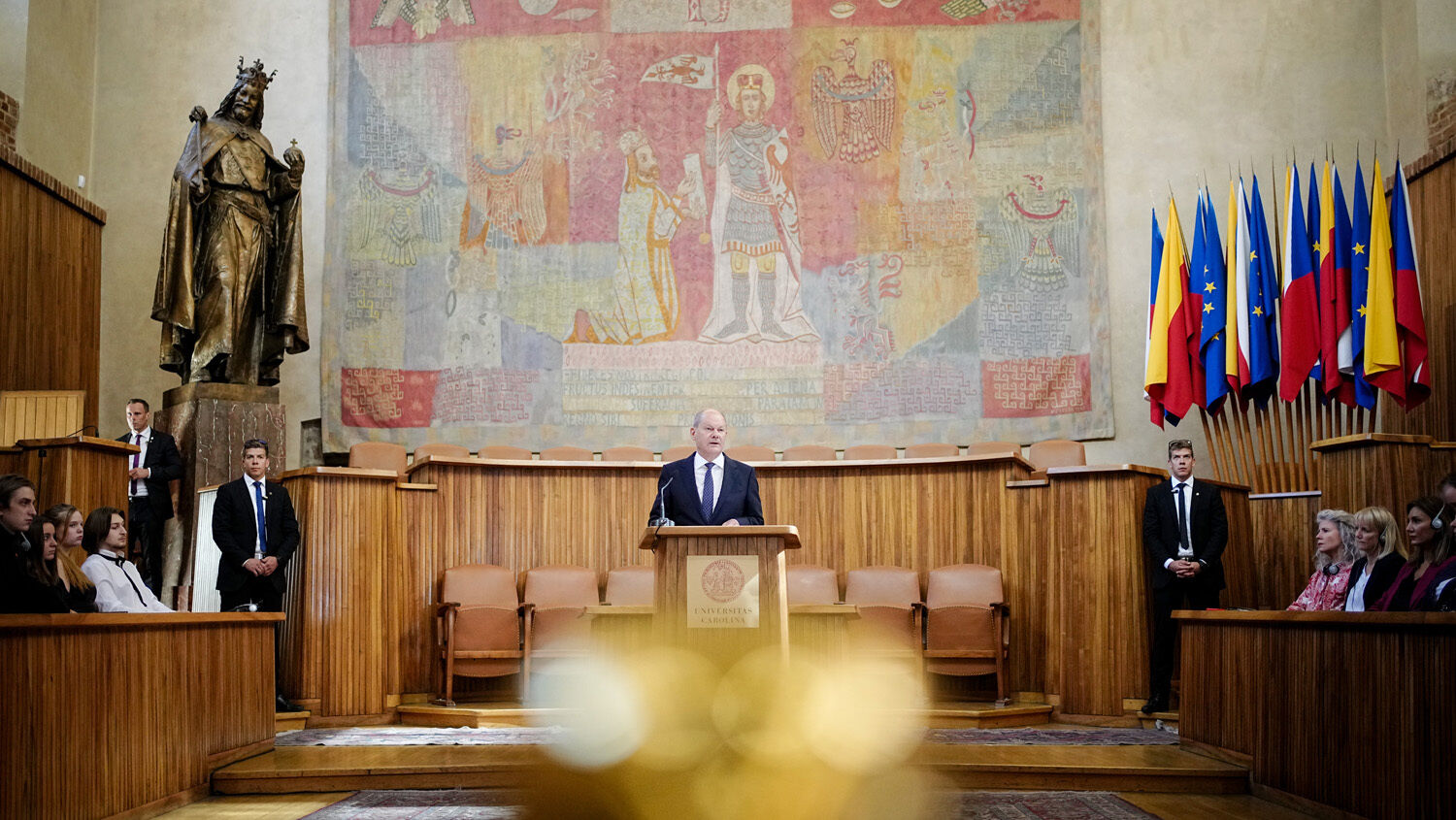 German Chancellor Olaf Scholz gives a speech at Charles University on where he stands on European policy.
Kay Nietfeld/picture alliance via Getty Images

Surrounded by images and a large statue of Charles iv, German Chancellor Olaf Scholz called for a new joint air defense system on August 29. In a keynote speech, he said: “If we jointly develop an air defense system in Europe, it will not only be more efficient and cost-effective, it would also be a security gain for Europe as a whole, and an outstanding example of strengthening the European pillar within nato.” Europe’s quest for independence naturally means less reliance on the North Atlantic Treaty Organization. But is Europe ready to be militarily independent? The example of Charlemagne, who inspired Charles iv, shows what Europe lacks.

Scholz noted that the European Union’s “one-sided dependencies” not only need to end in the economy and energy sectors but also in defense. He called for a “real EU headquarters” of all the armies and urged for a “geopolitical, sovereign and enlarged EU, which would include the Balkan states and bring the EU’s population to 500 million.” Yet what leader could govern such a mighty empire of diverse nations?

More than 1,000 years ago, Charlemagne succeeded in such a feat. As the first emperor to unite Europe, he had to overcome tremendous challenges and unite warring countries. What Scholz is proposing is only a small step toward this kind of empire. Yet these small steps follow the example of Charlemagne.

To this day, the most prestigious European award is the Charlemagne Prize. There is also the European Charlemagne Youth Prize. A building in Brussels, Belgium, which houses EU bureaucrats, is also named after him. The Via Charlemagne project, approved by the Council of Europe in 2018, focuses on the cultural history and corresponding unity Charlemagne brought. Germany’s Aachen Cathedral was founded by the late emperor and houses his throne, which is regularly visited by European leaders. In 2019, German Chancellor Angela Merkel and French President Emmanuel Macron signed the so-called Aachen Treaty. These are just a handful of examples of how this mass murderer is venerated today.

The fact that Scholz chose the historic Charles University for his speech on European unity implies that he also looks up to the late emperor. This reminiscing of the past is one of many proofs that today’s Europe is living by the heritage of the Holy Roman Empire, as the late Otto von Habsburg, the eldest son of Charles i, often emphasized as a member of the European Parliament.

Adherence to these traditions and the reverence of emperors of old have revived this empire time and again. Few, however, know or like to dwell on the bloody side of this history, which motivated the wars of both Napoleon Bonaparte and Adolf Hitler.

Encyclopedia Britannica states about Charlemagne: “The first three decades of Charlemagne’s reign were dominated by military campaigns, which were prompted by a variety of factors: The need to defend his realm against external foes and internal separatists, a desire for conquest and booty, a keen sense of opportunities offered by changing power relationships, and an urge to spread Christianity.” Charlemagne felt it was his duty to spread religion by any means necessary.

“The violent methods by which this missionary task was carried out had been unknown to the earlier Middle Ages,” Encyclopedia Britannica continues, “and the sanguinary [bloody] punishment meted out to those who broke canon law or continued to engage in pagan practices called forth criticism in Charles’s own circle.”

Calling for a combined air defense system of itself may not create an empire like Charlemagne’s. But there’s a reason these leaders come back to Charlemagne time and again.

The EU today resembles the Holy Roman Empire in various ways; yet it lacks the power that its predecessors had under a few key leaders. Charlemagne forged Europe’s unity in warfare, but he bound the nations together with the help of the Catholic Church. The European Union was the result of bloody world war, but it lacks a leader like Charlemagne and the influence of the Catholic Church.

Bible prophecy reveals that these key elements will cause Europe to unify powerfully in the near future. (For proof, request our free book The Holy Roman Empire in Prophecy.) Revelation 17 prophesies that 10 nations, or groups of nations, will unite under the rule of the Vatican and a political strongman.

While the EU today claims to militarize in defense, the Bible warns that it will repeat the errors of the past. In his 2016 article “Looking to Charlemagne,” Trumpet editor in chief Gerald Flurry warned, “The Holy Roman Empire, led by Germany and inspired by the traditions of Charlemagne, is poised to wreak havoc on this Earth one last time.”