Major media outlets are starting to notice parallels between modern Europe and the Holy Roman Empire. Are these similarities to be celebrated? Check history. 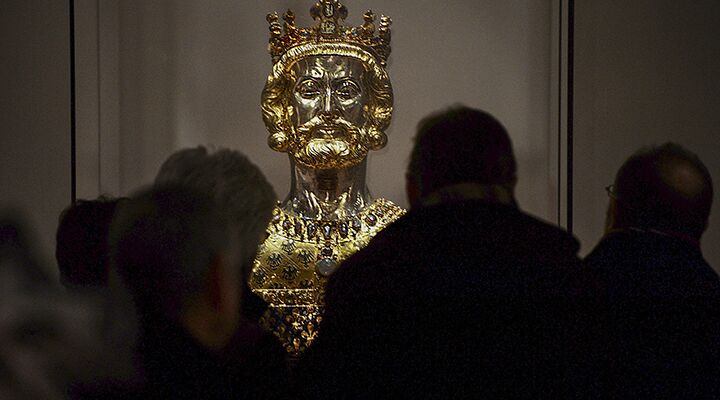 Major media outlets are starting to notice parallels between modern Europe and the Holy Roman Empire. Are these similarities to be celebrated? Check history.

“The Holy Roman Empire Can Help Inspire a Different European Union.” This was the headline of a January 20 article in the Financial Times of Britain.

Continuing the work begun by late educator Herbert W. Armstrong, we have highlighted the prophecies of a final resurrection of this empire for 70 years. Finally, the news media is catching up.

Many authorities today believe returning to the ways of the Holy Roman Empire would vastly improve Europe. This reflects a dangerous ignorance of history.

Viewed broadly as a union of church and state, the legacy of the Holy Roman Empire traces back to the Imperial Restoration of Rome by Justinian. The empire had been Roman for hundreds of years; but before Justinian, it was never truly controlled by a great church. Through Justinian’s Imperial Restoration in a.d. 554, the Catholic Church revived the empire.That church then guided all the resurrections of that empire that followed.

Read the history of the first six resurrections of the Holy Roman Empire under Justinian, Charlemagne, Otto the Great, the Habsburg Dynasty, Napoleon and Hitler. These were all bloody empires. Anybody should be able to see that.

The Holy Roman Empire carries with it a lasting legacy, but it isn’t a legacy of peace. A return to the ways of this empire will surely spark World War iii.

Your Bible prophesies that another resurrection of the Holy Roman Empire is coming. It also reveals that this seventh and final resurrection will be bloodier than the first six combined. Blood will flow up to the horses’ bridles in and around Jerusalem (Revelation 14:20).

The Forefather of Modern Europe

Encyclopedia Britannica says this of Charlemagne: “The first three decades of Charlemagne’s reign were dominated by military campaigns, which were prompted by a variety of factors: The need to defend his realm against external foes and internal separatists, a desire for conquest and booty, a keen sense of opportunities offered by changing power relationships, and an urge to spread Christianity.” Charlemagne felt it was his duty to spread his religion by any means necessary.

“The violent methods by which this missionary task was carried out had been unknown to the earlier Middle Ages,” Encyclopedia Britannica continues, “and the sanguinary [bloody] punishment meted out to those who broke canon law or continued to engage in pagan practices called forth criticism in Charles’s own circle.”

Charlemagne’s own supporters were shocked by his bloodlust. It is said that he waded through rivers of blood to convert people to Catholicism. He once massacred 4,500 Saxons in a single day. No one before him had ever done such a thing! Is this man really a good example for Europe to follow?

Many people overlook Charlemagne’s brutality and view him primarily as a man of culture. Under Charlemagne, the Holy Roman Empire experienced a revival of the arts and learning. “To many, the image of an enlightened ruler promoting culture and education for all seems incompatible with a violent warrior converting thousands by the sword,” Brad Macdonald writes in The Holy Roman Empire in Prophecy. “But Charlemagne’s example teaches us an important lesson: Culture and peace do not always go together. Modern Europe may appear to be a cultured and sophisticated group of nations. But as history reveals, that does not mean it is immune to Charlemagne’s style of violence.”

Indeed, one of the most prestigious European awards today is the Charlemagne Prize. Since 1950, Europe has openly celebrated Charlemagne’s achievements.

Are modern Europeans really too sophisticated to follow this man’s war-making example one last time?

Hitler hated the Jews and other peoples. Blind hatred led him to cause the death of 60 million people in World War ii!

There is an unseen reason for Hitler’s demoniacal hatred: He was possessed! There is a great deal of evidence of this fact. In his book Adolf Hitler: The Definitive Biography, John Toland quoted Englishman Maj. Francis Yeats-Brown reacting to a speech of Hitler’s: “During the rhetorical passages, his voice mounted to the pitch of delirium. He was a man transformed and possessed. We were in the presence of a miracle.” This is not human! An evil spirit force motivated Hitler to follow Charlemagne’s example and to exceed his destructive impact!

As the Allies were liberating Europe from Germany’s clutches near the close of World War ii, the most destructive war the world had ever seen, they were strongly resolved to ensure that such a tragedy did not happen again. United States President Franklin Roosevelt and British Prime Minister Winston Churchill wrote: “It is our inflexible purpose to destroy German militarism and Nazism, to ensure Germany will never again be able to disturb the peace of the world.”

That is recent history. How quickly we forget. Even before that, Germany started the War of 1870 and World War i. Time and again, the Germans have proven themselves ready for war whenever a strongman is at the head.

A Voice Crying Out

There was a man who foretold, even as Germany lay prostrate after World War ii, of Germany’s rise to power once again in our day. The Bible says to judge a supposed prophet by his fruits. “The prophet which prophesieth of peace, when the word of the prophet shall come to pass, then shall the prophet be known, that the Lord hath truly sent him” (Jeremiah 28:9).

You could fill many pages with proof that Herbert W. Armstrong’s prophecies, which were based on the Bible, have been fulfilled. In fact, we already have. Request our free booklet He Was Right and read it for yourself.

Here is one of the Bible’s main prophecies that Mr. Armstrong used to foretell Germany’s rise: “And there are seven kings: five are fallen, and one is, and the other is not yet come; and when he cometh, he must continue a short space” (Revelation 17:10). God revealed this prophecy to Mr. Armstrong as Hitler was rising on the scene. Hitler was the sixth “king” of the Holy Roman Empire. This means there is just one resurrection left before God wipes out this war machine forever!

Many scoffed at Mr. Armstrong when he warned of Germany’s rise from the ashes of World War ii. But no one is scoffing now. Many observers can see that Germany has gotten control of Europe. But for him to have seen it so far in advance is a miracle from God! No man can interpret prophecy without God’s inspiration.

Based on the Bible’s prophecies, Mr. Armstrong proclaimed back in 1934 the imminent appearance of a world dictator in charge of the Holy Roman Empire. Though Hitler was destructive, he never achieved world domination. This coming leader will electrify the world—paring the European Union down to 10 nations and causing the worst suffering this world has ever seen (verses 7-8).

Mr. Armstrong knew about the coming German strongman as revealed in the Bible. “And in the latter time of their kingdom, when the transgressors are come to the full, a king of fierce countenance, and understanding dark sentences, shall stand up. And his power shall be mighty, but not by his own power: and he shall destroy wonderfully, and shall prosper, and practise, and shall destroy the mighty and the holy people” (Daniel 8:23-24).

It is easy to see Germany’s dominance in Europe today, but this wasn’t the case when Mr. Armstrong forecast it. The European Union is clearly a cloak for German ambitions, as Bernard Connolly wrote in The Rotten Heart of Europe. The Holy Roman Empire, led by Germany and inspired by the traditions of Charlemagne, is poised to wreak havoc on this Earth one last time.

Thankfully, the same prophecies that foretold Germany’s rise describe how the time of suffering just ahead will be exceedingly short—and then will have a stunning, spectacular conclusion! “And through his policy also he shall cause craft to prosper in his hand; and he shall magnify himself in his heart, and by peace shall destroy many: he shall also stand up against the Prince of princes; but he shall be broken without hand” (verse 25).

Jesus Christ will soon return to put a stop to the Holy Roman Empire’s reign of terror forever! Mankind will finally receive the blessings it has desperately lacked for the past 6,000 years. We must keep our minds on that glorious vision.