The most humiliating surrender in American history, one year on 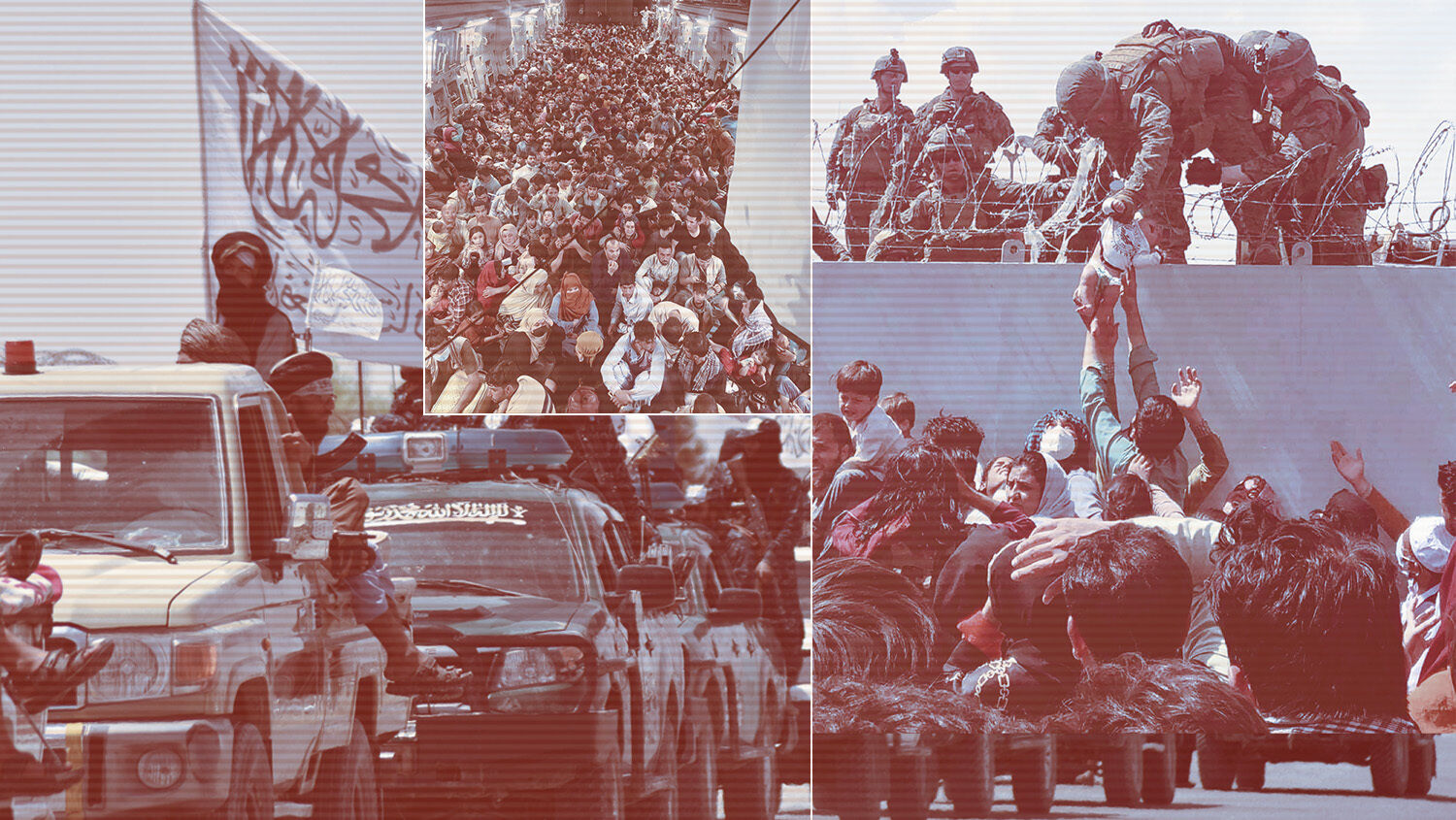 The most humiliating surrender in American history, one year on

A year has passed since the world watched Zabi Rezayee plummet to his death after losing his grip while clinging to a giant C-17 cargo plane as it took off from Kabul Airport. The 17-year-old, his 19-year-old brother, Zaki, and two others were trying to escape as Taliban terrorist forces closed in on the capital city. Zabi’s father found pieces of his son on the runway; he has not found Zaki. Others fell on top of houses. One body was recovered after a plane landed in Qatar: The person had been crushed by the folding landing gear.

This was at the peak of chaos and desperation in Afghanistan. That C-17 belonged to the United States Air Force. That grisly event is a symbol of America’s hasty, unforced, disastrous withdrawal from the country.

In April 2021, Joe Biden announced the removal of all American troops by September 11, blindsiding Americans and allies in the country. On July 5, the day after Independence Day, U.S. forces inexplicably abandoned the strategic Bagram Airfield in the middle of the night, not even informing the Afghan commander.

The Taliban went on the attack.

Biden ordered U.S. troops to stay within the Kabul Airport compound. Thousands and thousands of Afghans rushed to the gates to try to escape. Several thousand were American citizens and Afghans who had worked closely with the Americans against the Taliban. Desperate mothers passed their infants over the top of a crowd to troops on the compound wall. Several children died entangled in the barbed wire on either side of the barrier. Some children were even thrown over the wall by parents desperate to give them a future outside of the Taliban’s Afghanistan.

Also in those final days, the U.S. shared biometric data with the Taliban, ostensibly so the terrorist forces who were connected to flying planes into the World Trade Center on Sept. 11, 2001, would bring certain people to the airport for evacuation before Sept. 11, 2021. On August 26, two bombs exploded in the dense crowds around the airport, killing 169 Afghans and 13 U.S. marines. Biden responded with a retaliatory drone strike that accidentally killed 10 innocent Afghans, mostly children.

Finally, on August 30, desperate people on the ground watched the last U.S. transport plane depart, leaving behind more than 9,000 American citizens, $85 billion in military equipment, and the nation once again under Taliban rule.

“This has been the worst foreign-policy disaster in the nation’s history,” Trumpet editor in chief Gerald Flurry wrote in the October 2021 issue. “This terrible defeat was a spectacle seen by the entire world—and they were watching intently! It will mar our history, perhaps for the rest of time.”

One year later, Afghanistan, America and the world are suffering the disastrous effects. This event changed the world. It was deliberately designed to do so.

Mr. Flurry continued: “It sent an unmistakable message to both allies and enemies worldwide: America does not keep its promises. We do not honor commitments. We cannot be trusted even to protect our own people! Now, millions of people are going to be greatly persecuted and killed. Children and women are going to be abused, raped and murdered.”

This has happened. Afghanistan has reverted to barbarism, and it teeters on the verge of collapse. Once the U.S. and its allies left, the Taliban began beating people in the streets for violating sharia law. People were publicly executed in stadiums. Bodies were hung from cranes as warnings.

“Women’s rights have sharply regressed,” the New Statesman reported on August 15. “Contrary to the Taliban’s promises before the takeover, women and girls have mostly been prevented from receiving an education, just as they were during the 1990s.” Girls are again being forced into marriage and into sex slavery. Women and girls as young as 15 have been taken as “war brides” for Taliban fighters. In a few cases, girls as young as 1 year old have been sold as future brides for men.

“Afghanistan’s economy has collapsed in the year since the takeover. International aid, which before the takeover was worth almost half of the country’s [gross domestic product] and funded three quarters of public spending, has dried up. … The World Bank estimates that Afghanistan’s gdp has dropped by between 20 and 30 percent over the past year” (ibid).

Nine in 10 Afghans now live in poverty. Most suffer daily from shortages of basic necessities. Famine is a persistent threat. Some have sold their children into slavery for money to survive.

Biden promised that al Qaeda would never return, but on July 31, a U.S. drone strike killed the leader of al Qaeda, Ayman al-Zawahiri. Where was he? At a safe house in the middle of Kabul. U.S. intelligence has also discovered several terrorist groups building training camps in Afghanistan. Many of us remember what such terrorist training camps wrought in New York City, the Pentagon and a field in Pennsylvania.

Twenty years of American blood and treasure have been thrown away in a matter of months, and with it the hopes of the Afghan people.

Death Throes of a Superpower

Another deadly ripple effect is how this defeat signaled the end of the American superpower.

“America is not just declining, it is in the last throes of death,” Mr. Flurry wrote. “It is being destroyed before our eyes. Many are now in open despair. This Afghanistan disaster is the worst evidence ever of how the United States has collapsed as a superpower!” (op cit).

Victor Davis Hanson pointed this out in “How to Erode the World’s Greatest Military”: “The global aftermath was eerie. Russia in a few months thereafter invaded Ukraine. Iran proudly announced it would soon have enough fissionable material to make a nuclear weapon. North Korea resumed its provocative missile launches. China openly talked of storming Taiwan.

“The common denominator was the global perception that any president and military responsible for such colossal, televised incompetence would or could neither deter enemy aggression nor protect allied interests” (July 26).

Top military and political officials in Europe remarked that Putin would not have invaded Ukraine if America had not sent a signal from Afghanistan. Russia, China, Iran and Germany have been strategizing for decades to undermine America’s leadership position in the world. Afghanistan was a green light for these nations to take advantage of weak American leadership.

The debacle has even impacted recruitment in the U.S. Armed Forces, as nearly every major branch is facing a shortage. Afghanistan is a black stain on the reputation and prestige of the armed forces. It soured patriotic Americans and many veterans who had risked life and limb in Afghanistan for 20 years.

The withdrawal from Afghanistan introduced a new world order where America is becoming a former superpower.

Yet to this day, none of the leaders responsible for the debacle have been held to account. All of them still have their jobs. The only individuals to lose their jobs were those who criticized the Biden regime.

This debacle was not inevitable. It was not incompetence. It was deliberate.

The Legacy of Obama

The most important point to remember from this anniversary is why it happened. This is a truth you will only find explained by the Trumpet. Mr. Flurry revealed the real reason for this disastrous withdrawal: “Many people say it proves Joe Biden’s incompetence. But this catastrophe isn’t the result of bungling and bad judgment. It is a deliberate, planned effort to destroy America. … This is not mere incompetence. It is calculated destruction. It is treachery!” (op cit).

The bitter fruits Afghanistan, America and the world have tasted over this past year are the fruits of treason. This destruction is the legacy of the radical-left leadership of the United States, led by Barack Obama through Joe Biden. It is motivated by Obama’s hatred for what America has been, and it is part of his ongoing transformation of America into something very different.

This somber anniversary is a reminder of the ultimate motive of the Biden administration, which is really the third term of Barack Obama: to undermine American power abroad. These radical Communists want to “blot out the name of Israel” (2 Kings 14:27). This is an attack on what America is and has been, and especially anything that gives America its power. The radical left wants to abase America on the world stage and empower its enemies. This is treason. It is the reason behind this foreign policy of destruction.

This is not just about Barack Obama, however. It is about the American people. The American superpower was not a historical accident. It was a blessing from God that was specifically prophesied in the Bible. Americans are losing that blessing because of their own beliefs, actions and apathy. This too is prophesied throughout the Bible. For proof, request your free copy of The United States and Britain in Prophecy, by Herbert W. Armstrong.

This history is important to remember. It is the fulfillment of Bible prophecy and a reminder that only the Bible can truly explain what is going on inside America, and the world, right now.

The United States and Britain in Prophecy
People of the Western world would be stunned—dumbfounded—if they knew! The governments of the United States, Britain, Canada, Australasia, South Africa would set in motion gigantic crash programs—if they knew! They could know! But they don’t! Why?
From The October 2022 Philadelphia Trumpet
View Issue FREE Subscription
Next
Previous