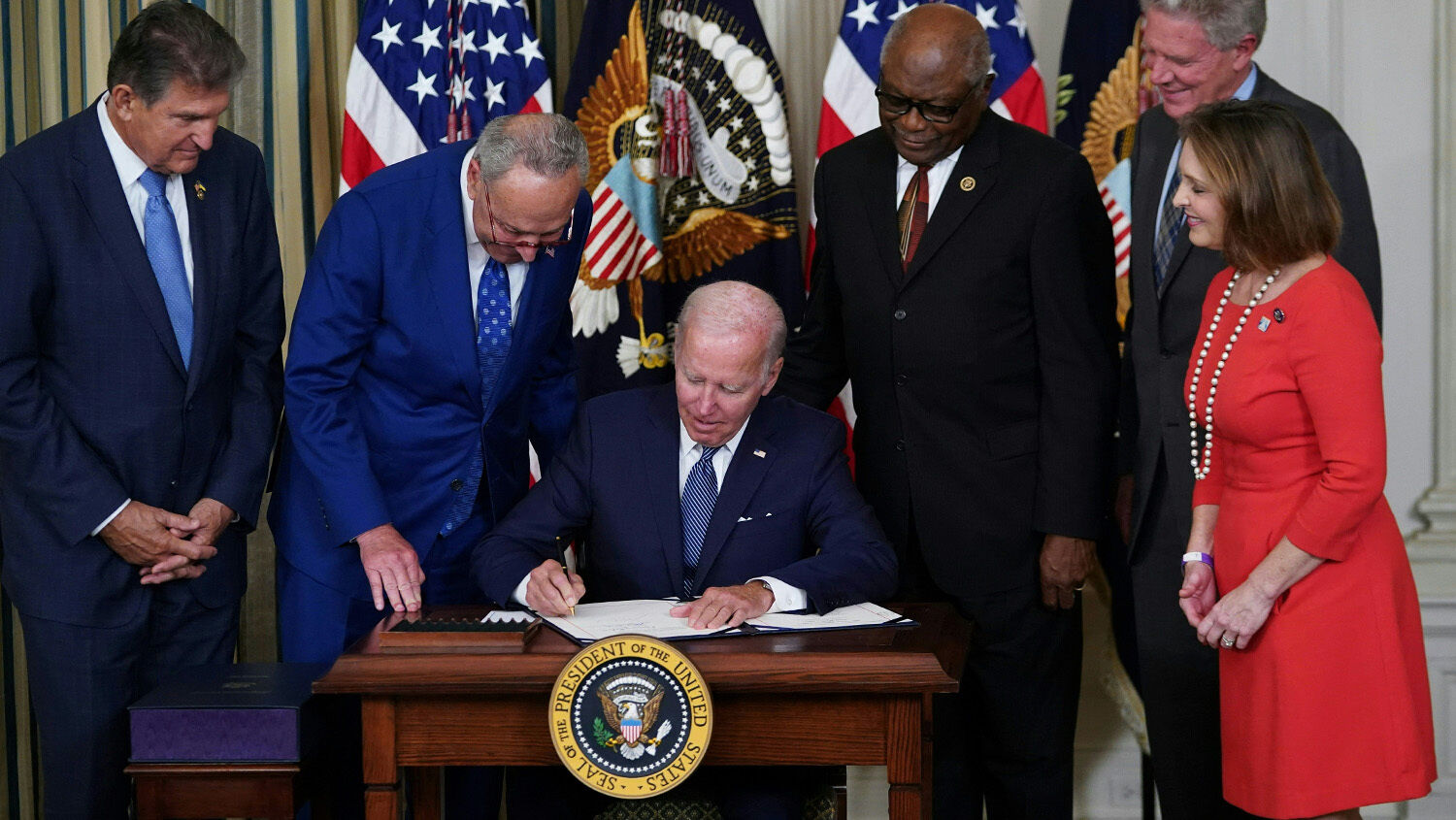 US President Joe Biden signs the Inflation Reduction Act of 2022 into law during a ceremony in the State Dining Room of the White House in Washington, DC, on August 16, 2022.
MANDEL NGAN/AFP via Getty Images

Will it help Canada’s economy or China’s?

The Inflation Reduction Act (ira) was signed into United States law on August 16 by Joe Biden. The act is being hailed as a major victory for green energy and fighting climate change. One of the central features to the $370 billion spending package is the reform on electric vehicle manufacturing and subsidies. This is intended to attract electric vehicle and battery manufacturing to North America, and Canada is claiming to be one of the biggest winners of the new law.

“While the ira has the potential to impact Canada’s economy in many ways, three key opportunities stand out: automobiles, batteries and construction materials,” wrote the National Observer. “The ira extends the $7,500 tax credit for new EVs and introduces a $4,000 credit for used EVs. These tax credits provide a massive opportunity for Canada to supply electric cars and their parts to the U.S. market.” This new tax credit will be uncapped, meaning that the previous requirement for automakers to sell 200,000 vehicles to qualify no longer applies. This makes all electric vehicles more attractive, if you can receive $7,500 for buying one. However, there are some catches.

“Even more important to Canada are the new rules on batteries,” continued the National Observer. “Starting in 2024, to access the EV tax credit, the vehicle must not only be built in North America, but its battery must contain at least 50 percent mineral content sourced in North America or by a U.S. trading partner (i.e., not China), and 60 percent of the battery components (by value) must be made or assembled in North America. These percentages rise by 10 percent annually until they reach 80 percent in 2027 and 100 percent in 2029, respectively.”

Not only will companies get a windfall for manufacturing parts in North America, countries like Canada can expect a demand for lithium mining and battery construction in North America. These green energy projects will produce more jobs, cut down on emissions, and inject money into the economy. The only problem is, the entire premise of the Inflation Reduction Act is based on pure fantasy.

The stated objectives of North American production are impossible to achieve because, for years, Canada has led the way in giving China control over the electric vehicle supply chain. China has a 79 percent market share of the global lithium battery market. In second place, the United States controls only 6 percent of the market. Canada does not currently have any lithium mining operations in the country, despite having large hard spodumene and brine-based lithium deposits.

Earlier this year, Canadian Prime Minister Justin Trudeau’s government allowed NeoLithium, a Toronto-based lithium mine operating in South America, to be purchased by the Chinese government. That was only the latest Canadian lithium company to be purchased by China. The Toronto Star reported: “In 2018, Vancouver-based Lithium X was purchased by NextView New Energy Lion Hong Kong. That same year the Chinese company Tianqi bought a 23.8 percent share in a Chilean lithium mine from Canada’s Nutrien. Last November, Vancouver-based miner Millenial Lithium narrowly missed being acquired by China’s Contemporary Amperex Technology Co., which was outbid by an American buyer.”

The Canadian company Snow Lake Lithium is planning on opening a mine in Manitoba, which is predicted to produce 192,480 tons of lithium for car batteries by the end of 2024. The mine is still trying to create an agreement with a battery manufacturer to have their resources directly shipped to the factory.

Update: Canada is included in the United States’ proposed tax incentive for electric vehicles – and that’s good news for Canadian workers. Our team has been working hard and standing up for them, and we’ll continue to do just that as this proposal moves through Congress.

In wake of the Inflation Reduction Act, Trudeau has been doing his best to attract electric vehicle manufacturing to Canada, as Global News reported: “Ottawa is expected to sign separate agreements with Volkswagen and Mercedes-Benz on Tuesday that will see the two German auto manufacturers secure access to Canadian raw materials for batteries in electric vehicles.” The deal with Volkswagen may lead to the company building a gigafactory in Canada at a future date.

“The move is seen as an effort to ensure that the automaker’s plug-in vehicles qualify for the U.S.’s revamped EV tax credits, which place stricter requirements on where battery and vehicle manufacturing can be done,” reported the Verge. “VW says it plans to build a ‘dedicated gigafactory’ somewhere in North America, and today’s agreement most likely increases Canada’s chances of being selected as the location.”

Volkswagen is already planning to build battery cell production plants in Europe by 2030, but the new law means that if Volkswagen buyers are going to qualify for the $7,500 subsidy, the batteries must be made in North America. “Other automakers are similarly scrambling to shift supply chains to ensure they are eligible for the $7,500 customer incentive,” wrote the Verge. Yet as North American, European and Japanese companies try to adjust to the new rules, China plans on expanding its dominance.

Even if Canada and the United States were able to ramp up production to meet these demands, most of the raw materials would still be supplied by Chinese-controlled mines. Any manufacturing increase in North America will ultimately empower Chinese mining operations.

The push to transition to electric cars is based on government subsidies. The $7,500 subsidy to those who buy electric cars is funded by the taxpayer. The push to expand the electric car market in the United States and Canada will come at a massive deficit at the taxpayers’ expense. When revenue from gas taxes fall, taxes on electric vehicles will be implemented to address the shortfall.

The Inflation Reduction Acts is a smaller version of the massive $2 trillion infrastructure Green New Deal the Biden administration unveiled in 2021. In “Biden’s Climate Plan Will Empower China,” we wrote last year:

Leaving aside the fact that America is running trillion-dollar deficits each year and does not have $174 billion to spend on plug-in cars, Biden’s Climate Plan sounds good until you start crunching the numbers. Just because plug-in cars do not emit carbon dioxide when driven does not mean they do not leave a carbon footprint. They still have to be recharged with electricity generated at a power plant, and they still have to be built in the first place. When you factor in the amount of coal and oil America uses to power up its electric grid, the average plug-in vehicle produces the same amount of carbon dioxide as a gasoline vehicle that gets 88 miles per gallon. And when you factor in the greenhouse gases emitted during the manufacture of the lithium batteries used to power plug-in vehicles, they may create more carbon dioxide than a gasoline vehicle…

These electric vehicles will greatly empower the Chinese Communist Party, however, since it manufactures the solar panels and electric car batteries needed to power the Green New Deal being pushed by U.S. oligarchs.

The Inflation Reduction Act will neither reduce carbon emissions nor strengthen the economies of the United States or Canada. In reality, China is the ultimate winner. The real motive of the green climate policies in America and Canada is not to save the planet, but to hurt the economy and remove the advantages of fossil fuels and other resources.

The late Herbert W. Armstrong proved in The United States and Britain in Prophecy that the blessings of physical resources were given to the English-speaking nations by God and that these nations are descendants of biblical Israel. But the resource security and economic stability we have enjoyed for centuries is being removed because of sins against God’s law.

The radical left is part of these prophesied curses. The deliberate plan to fundamentally transform America, Britain, Canada and other Commonwealth nations is accelerating the decline of these nations and the ascent of our enemies, such as China. As the radical left uses green energy policies to attack the end-time nations of Israel, they are empowering China to gain mastery over our trade and economy. The Bible prophesied this would happen just before Jesus Christ returns.

To learn more about these vital prophecies, please read The United States and Britain in Prophecy.