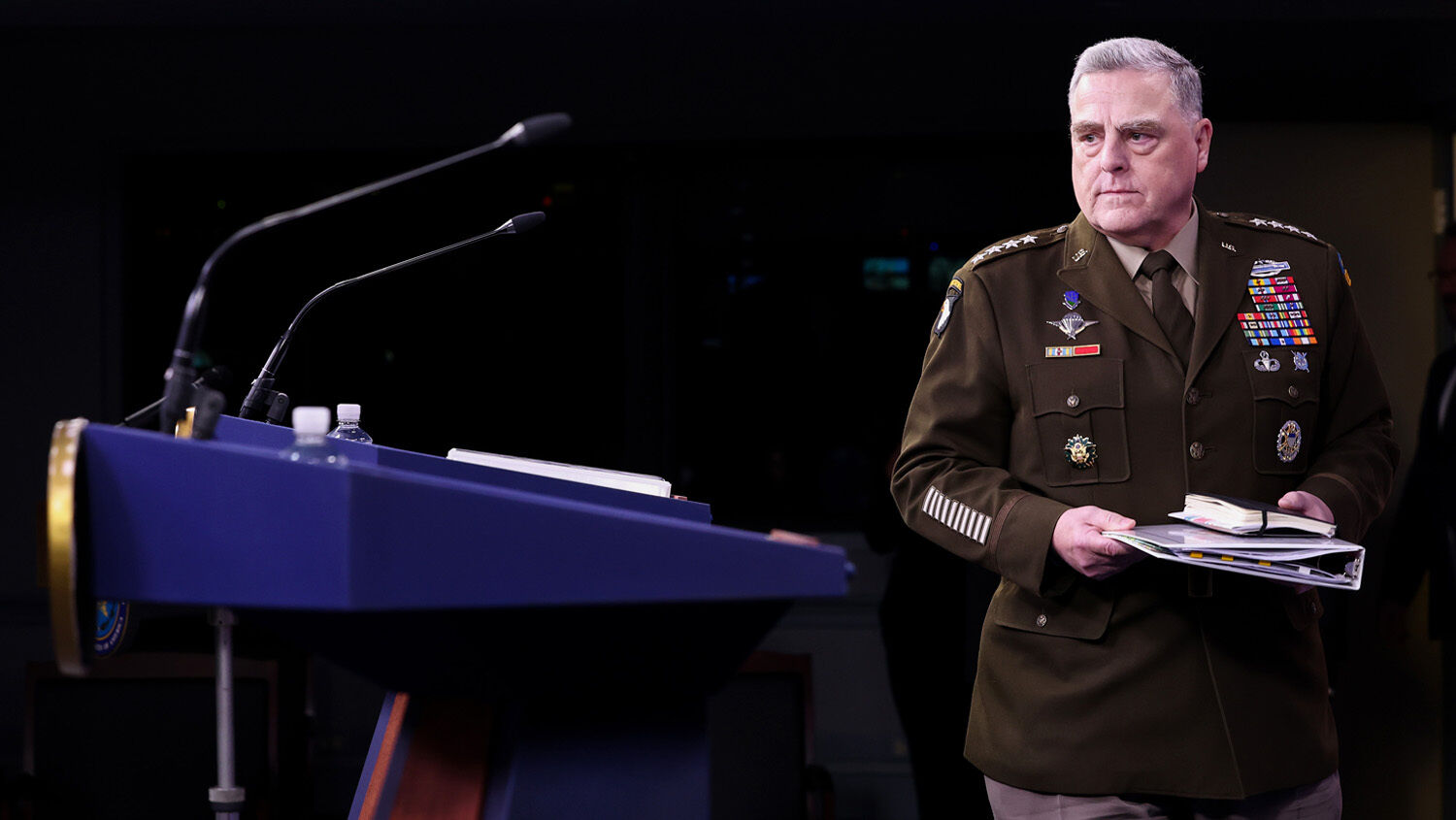 Chairman of the Joint Chiefs of Staff Gen. Mark Milley arrives for a news briefing at the Pentagon on July 20.
Anna Moneymaker/Getty Images

The radical left’s Trojan horse is heading the military.

“I have absolute confidence that [Gen. Mark Milley] will fulfill his duty with the same brilliance and fortitude he has shown throughout his long and very distinguished career,” United States President Donald Trump said at the ceremony where Milley became the 20th chairman of the Joint Chiefs of Staff. This warm endorsement has turned cold with betrayal.

Only three years later, it is no secret that General Milley despises Donald Trump. Peril, by Bob Woodward and Robert Costa, clearly explains that Milley undermined President Trump’s agenda. Milley parrots the mainstream media narrative that Trump is a rogue president and any actions are acceptable to stop Trump. This justification is disconnected from reality.

A new account sheds more light on Milley’s actions during the last few months of the Trump administration and exposes him as an agent of the radical left “deep state.”

Working From the Inside

The New Yorker published an article titled “Inside the War Between Trump and His Generals,” by Susan Glasser and Peter Baker, which is an excerpt from their book Divider. The book is more well-sourced than Peril and confirms some of the key details that prove Milley is an agent of the deep state. It is also a carefully crafted narrative to paint him as a hero of the anti-Trump movement.

The narrative maintains that Milley was never a yes man and always had differences of opinion with Trump. However, the turning point was Lafayette Square, when Milley walked with Trump to St. John’s Church after the protesters had been removed. After the media attacked Trump and all those who appeared with him, Milley publicly apologized and privately told people, especially Democrats, it was a mistake. A week later, Milley drafted a letter of resignation, in which he accused Trump of doing irreparable harm, politicizing the military, and having more in common with fascists and Nazis than with America.

The New Yorker piece exposed the concerted effort by the entire senior military establishment to derail Trump’s agenda and implement their own policies. Then National Security Adviser James Mattis, former Chairman of Joint Chiefs of Staff Joseph Dunford and Milley all declared that Trump politicized the military; meanwhile, they actively worked against the president because of political beliefs. Secretary of Defense Mark Esper was also a pivotal player who worked to undermine Trump. Instead of resigning, Milley stayed to actively oppose the president.

The New Yorker wrote: “The challenge, as he saw it, was to stop Trump from doing any more damage, while also acting in a way that was consistent with his obligation to carry out the orders of his commander in chief. Yet the Constitution offered no practical guide for a general faced with a rogue president. … ‘If they want to court-martial me, or put me in prison, have at it,’ Milley told his staff. ‘But I will fight from the inside.’”

That statement is a declaration of war by the senior-ranking member of the armed forces against the commander in chief and president of the United States. This included threatening loyal Trump officials, talking with members of the Democratic opposition, and working to oppose any effort to challenge the fraudulent 2020 election. The Trumpet has covered some of these events before. This statement by Milley clearly defines his intent.

The first chairman of the Joint Chiefs of Staff was Omar Bradley. During his tenure, he faced a similar situation between President Harry Truman and five-star Gen. Douglas MacArthur. The two men had diametrically opposite opinions on how to move forward with the war in Korea. Truman wanted to wage a limited war, while General MacArthur wanted to aggressively confront China and win all of Korea.

On March 20, 1951, General MacArthur wrote a response to Republican Joseph Martin’s speech condemning Truman’s conduct of the war and finished with the sentence: “There is no substitute for victory.” Over the next two weeks, MacArthur made a number of public statements that seemed to undermine Truman’s negotiations for a ceasefire, which frustrated the entire establishment. This violated a Dec. 6, 1950, directive from the president that all public statements had to be cleared through the White House. Immediately after this, Martin made MacArthur’s criticism of the president public.

That was the last straw for Truman, who was furious. For a number of days Truman, Bradley and the security chiefs discussed if they should fire MacArthur for insubordination. Bradley said: “If the jcs [Joint Chiefs of Staff] endorsed Truman’s decision to fire MacArthur and if the firing was construed as mainly political, this could have the effect of ‘politicizing’ the jcs. This, in turn, could lead to a drastic erosion in the standing of the jcs as objective advisers to any and all presidents, whatever the party.” Bradley was concerned about politicizing the Joint Chiefs of Staff, even when MacArthur had clearly violated a presidential directive.

At other moments, war heroes such as generals Douglas MacArthur and Curtis LeMay were vilified as near insurrectionaries for their blistering attacks on sitting presidents.

In such a climate, the Uniform Code of Military Justice, which became effective law in May 1951, prohibits active generals from disparaging their commander in chief—in the way perhaps MacArthur had bitterly pilloried then president Harry Truman over the Korean War.

Only one month after MacArthur’s firing, Truman implemented the Uniform Code of Justice, specifically Article 88, which says: “Any commissioned officer who uses contemptuous words against the president, the vice president, Congress, the secretary of defense, the secretary of a military department … or possession in which he is on duty or present shall be punished as a court martial may direct.” Adverse criticism is allowed, but not outright statements of dissent.

General MacArthur was fired for saying far less than Milley. This helps put our modern-day events in perspective. Milley’s statements as chairman are the most politicized ever said from that office. It is less insubordination than treason.

All Roads Lead To …

The narrative that Milley decided to fight from the inside following the trauma of walking to Lafayette Square is a carefully crafted story that obscures the truth. President Barack Obama politicized the military. General Milley is one of Obama’s deep state generals who is aligned with fundamentally changing the country.

The Trump White House was besieged with deceit, betrayal and fake loyalists. A lobbyist named David Urban, who ran Trump’s campaign in Pennsylvania in 2016, was instrumental in getting Mike Pompeo, Mark Esper and Mark Milley their appointments. Urban was pro-Army and urged Trump to bring in people who were not a part of the Marine sphere of Mattis, Dunford and former White House Chief of Staff John Kelly. Urban appears to be a Trump loyalist, but the three Army men he suggested have all turned out to be Trojan horses for Obama’s agenda.

Trumpet editor in chief Gerald Flurry writes in America Under Attack: “As president, Obama gutted America’s military leadership. During his first five years in office, President Obama forced close to 200 generals and many other high-ranking officers out of their commands. He simply dismantled and replaced the leadership of our armed forces. … Presidents often change some top military staff, but these men called what Obama did a ‘purge.’” Obama forced out leaders who opposed his radical, Marxist ideas and promoted those who agreed with that agenda. Mr. Flurry continues: “The people Obama elevated to these commands prioritized political correctness, racial and gender crusading, and other outrageous causes that eviscerated America’s defenses. They supported Obama allowing transgenders into the military. They directed resources toward promoting radical-leftist ideas in foreign countries rather than protecting America’s interests and securing the globe.”

One of the people Obama promoted at this time was Mark Milley. On May 13, 2015, Obama nominated Milley to head the Army. This appointment would not have occurred if Milley was not aligned with emasculating the military and promoting Marxism in the ranks. Subsequent events have shown that Milley has endorsed radical gender theory and critical race theory. He was one of those responsible for the disastrous withdrawal from Afghanistan and supports the radical left’s election steal. Milley has been more loyal to Barack Obama than to the Constitution or to the office of the president.

God is exposing the deep-seated corruption that has infiltrated every government office and institution in the United States. Having such a radical general at the helm of the armed forces is a disturbing reality. Yet all roads traveled by the radical left always lead to one man: Barack Obama. This is all part of a prophesied attack on America that is instrumental in the decline of the nation just before Jesus Christ returns.

The truth will keep coming out as dramatic events unfold in America. Only Mr. Flurry’s book America Under Attack explains why this is happening right now.