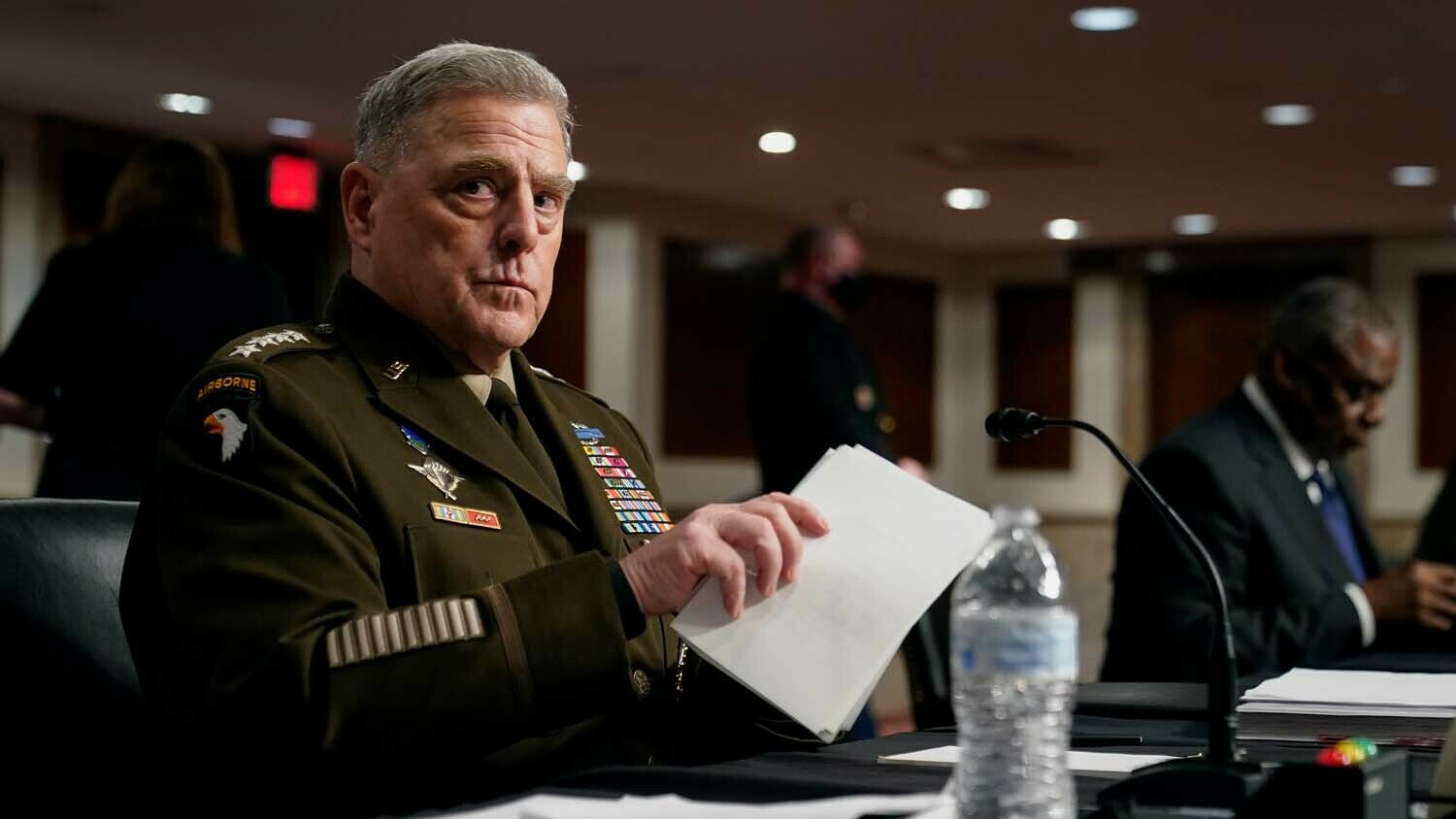 Chairman of the Joint Chiefs of Staff Gen. Mark A. Milley gathers his items after speaking at a Senate Armed Services Committee hearing on September 28 in Washington, D.C.
Patrick Semansky-Pool/Getty Images

What happens when the military leadership betrays America?

“There is no substitute for victory,” Gen. Douglas MacArthur concluded in a letter to Republican House Minority Leader Joseph Martin in 1951. It was that sentiment that sealed his fate. Six days later, General MacArthur would be dismissed by President Harry Truman for defying the commander in chief, for public criticism and for conspiring with the opposition party.

General MacArthur was sacked because he wanted to use all available force to gain victory in Korea, which exceeded what President Truman was willing to allow. Truman also thought MacArthur was actively seeking to undermine his presidency by publicly opposing his policy decisions and writing to Republican journalists and politicians. This was the most high-profile case of controversy surrounding the chain of command in United States history.

Now think of America’s current top generals. MacArthur was relieved of duty for a fraction of what has been revealed about the top echelons of the U.S. military today.

Not only have they violated the chain of command, undermining the office of the president, they have colluded in committing treason. What happens when those who have taken an oath to protect the Constitution and the United States betray their country?

This lawlessness may play an important role in the fulfillment of Bible prophecy.

Undermining the Commander in Chief

Multiple reports have surfaced about Gen. Mark Milley, the chairman of the Joint Chiefs of Staff, deliberately undermining President Donald Trump. “Somehow a gradual drift in the agendas of our military leadership has resulted in too many various emphases on domestic cultural, social, and political issues,” wrote Victor Davis Hanson at American Greatness. The U.S. military has adopted an agenda beyond its role in defending the nation. Hanson identified the first major crisis as the current lawlessness of the Joint Chiefs of Staff: “The chair may be the nation’s highest iconic ranking military officer. But his actual operational control over the military is carefully delineated by law and quite limited by design.”

In the final days of the Trump administration, Milley told the top officers of the military leadership to route all military decisions through him, apparently fearing President Trump would take some sort of military action before leaving the White House. Milley also took a call from Speaker of the House Nancy Pelosi in which he agreed to undermine the president’s use of nuclear weapons. This violated the legal limits of his authority.

That clear and dangerous usurpation of power is certainly contrary to the law—no matter what his fellow officer corps defenders plead. It is entirely irrelevant whether Milley acted in good faith, or was swayed by the emotions of the time, political and media pressures, or his own outsized ego. His job is to stay cool and offer calm advice strictly within the letter of the law. And he failed on that critical account.

Such an act is certainly unprecedented in U.S. military history. And if de facto such acts were to be institutionalized, then the chairman of the Joint Chiefs, with impunity, could ignore the law and place the operation of the military in his own hands, on grounds of his own hunches about the current wisdom or stability of his commander in chief.

Milley clearly broke the law. Furthermore, Milley is either delusional, taking extraordinary steps with absolutely no evidence to support his thinking, or is clearly aligned with the opposition to President Trump: the radical left.

But it gets worse. Milley also reportedly called his counterpart in the Communist Chinese military, promising to warn the Chinese if President Trump decided to launch a preemptive strike. This is perhaps the most obvious, cut-and-paste case of treason by a United States military officer. Milley undermined national security by colluding with the Communist Chinese. Hanson continued in his article:

The civilian-military tradition of U.S. national security cannot survive a Joint Chiefs chairman who informs Washington journalists that he believes his commander-in-chief exhibits Hitlerian characteristics, appropriates power from the elected president, violates the chain of command, freelances in foreign policy with a foreign and hostile military, and communicates directly to take such action with the opposition leader speaker of the House—after circumventing an elected president. Whether he knows it or not, Milley’s resignation is not a matter of if, but only of when. If Milley were not to resign, then we essentially have no civilian control over the military, and his dereliction will be a green light to other would-be usurpers of rights denied the Joint Chiefs of Staff by law.

So who really controls the leadership of the military right now? That is a chilling question to consider. The recent debacle in Afghanistan has exposed the real agenda of the military leadership and who is really the current commander in chief.

In the October 2021 Trumpet magazine, editor in chief Gerald Flurry called the withdrawal from Afghanistan “the worst foreign-policy disaster in the nation’s history.” Everything that could go wrong did go wrong. Every decision put Americans and Afghan allies at risk. Even when the U.S. military knew the time and place of a planned suicide attack, nothing was done and 13 Marines and over 100 Afghans died.

The disaster was under the operational command of Gen. Ken McKenzie, the U.S. Central Command commander. The Taliban offered to allow the U.S. to keep security for all of Kabul, but McKenzie didn’t accept their offer. McKenzie shared the personal information of Americans and Afghan allies with the Taliban, saying that the terrorists could help bring them to the airport. The U.S. military also left $85 billion of military equipment to the Taliban. Despite the worst-ever performance of operational decision-making and leadership, General McKenzie was not sacked. Defense Secretary Lloyd Austin, who orchestrated military operations, and General Milley, who advised on strategic decisions, also still have their jobs.

That is because it was not incompetence, it was all by design! As Mr. Flurry wrote: “But this catastrophe isn’t the result of bungling and bad judgment. It is a deliberate, planned effort to destroy America. … This is not mere incompetence. It is calculated destruction. It is treachery!”

Afghanistan exposed the radical left’s stranglehold on the current leadership of the U.S. military. Secretary of Defense Austin, General Milley and General McKenzie have all colluded or enabled treason to be committed against America. As Mr. Flurry explained in “This Isn’t Incompetence. This is Treason!” Joe Biden is only a puppet, a front man, for Barack Obama, who is really controlling the operations of the radical left. Doesn’t that make Barack Obama the actual commander in chief?

The radical left agenda of fundamentally transforming America is at a critical turning point. In order to fulfill their dreams, the most unpopular and radical changes must be made even in the face of opposition from the American people. This means that in order to successfully turn America into a Communist dictatorship, the radical left needs the support of the military. It is the only institution left in America that has the unilateral power to enable their agenda or destroy it.

Mr. Flurry wrote: “President Obama also specifically prepared for this summer’s disaster in Afghanistan with some crucial decisions during his administration. … One diabolical act of his received little attention. As president, Obama completely reshaped the leadership of America’s military.” Obama was successful in radicalizing the leadership of the U.S. military. But what about the rank and file? What will happen if the leaders are radical but the service members are still loyal to the Constitution?

Mr. Flurry explained in the July 2021 Trumpet that a Bible prophecy in 2 Kings 14:26-28 shows that President Trump will regain the presidency. (Please read “What Will Happen After Trump Regains Power” for a detailed explanation.) “There are different ways you can war,” Mr. Flurry wrote, “but the indication is that regaining office may take considerable work. Donald Trump will have to fight for it. It doesn’t have to be military action, but it certainly could.”

In “How Afghanistan Could Help Donald Trump Return to the Presidency,” theTrumpet.com managing editor Brad Macdonald wrote: “The military operates on a chain-of-command system of government. Orders made at the top flow through the chain of command and are carried out by soldiers at the bottom. … But chain of command operates on trust, confidence and obedience.” What is a soldier’s duty when the commanders break their oath and actually commit treason? What happens when these top generals violate the chain of command, and act on authority they do not have? These are difficult questions that every service member may have to answer in the near future.

We do not know how Donald Trump will return to the presidency, but the Bible foretells that it will happen. We don’t know if the military will be involved, but we do know that if Trump is to be commander in chief again, the current military leadership will have to be moved out of the way.

This chilling crisis is developing in the American military. This is on top of the other crises drowning the nation: inflation, supply chain chaos, the open southern border, the fbi persecuting Americans, among many others. However, the Bible explains how all these problems will be solved, and it won’t be by Donald Trump or any other human leader. To learn more, please read our free booklet America Under Attack.