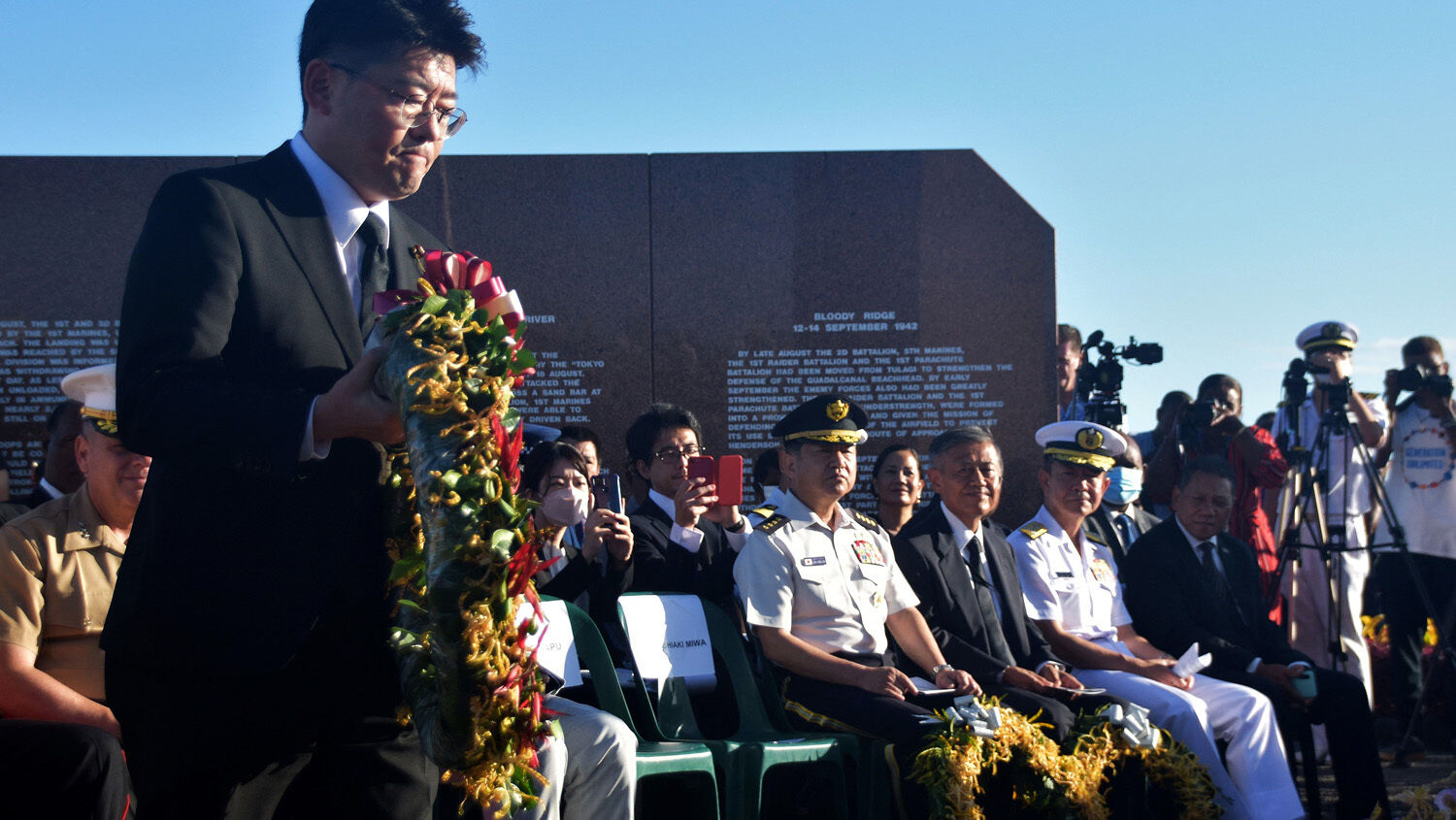 Japanese Defense Minister Makoto Oniki lays a wreath during a ceremony marking the 80th anniversary of the Battle of Guadalcanal at Skyline Ridge in Honiara on the Solomon Islands on August 7.
CHARLEY PIRINGI/AFP via Getty Images

Eighty-year anniversary of the Battle of Guadalcanal

The humid jungle cast a haze as far as the eye could see. Tropical plants and thick vines made the island look like a paradise, but it had been Dante’s inferno for the past three months. Most of the United States Marines had never heard of Guadalcanal before landing on the island on Aug. 7, 1942. Now, most wished they could forget it.

During a lull in the fighting, the men of the 1st Battalion of the 7th Marines rested in whatever shade they could find. The air on Guadalcanal always stank; the unrelenting sun and morass of water in the jungle made a never ending cycle of rotting vegetation. But added to this was the putrid smell of the hundreds of dead Japanese soldiers around the airfield.

When the shrill battle cry of another charge sounded, the exhausted men immediately snapped their minds into focus. Mortars landed with large cracks and explosions, throwing dirt and debris in their eyes as the Japanese closed in on their positions. The Marines were outnumbered three to one, and wave after wave of men charged headfirst into the American machine guns.

These attacks came relentlessly, but the Marines never broke. Sgt. John Basilone kept the machine guns in his section firing, killing several hundred Japanese himself, and ran through enemy fire to get more ammunition. These actions won him the medal of honor. The inscription with the medal reads: “For extraordinary heroism and conspicuous gallantry in action against enemy Japanese forces, above and beyond the call of duty, while serving with the 1st Battalion, 7th Marines, 1st Marine Division in the Lunga Area, Guadalcanal, Solomon Islands, on 24 and 25 October 1942. … His great personal valor and courageous initiative were in keeping with the highest traditions of the U.S. Naval Service.” It was this conspicuous gallantry by all of the American men fighting on Guadalcanal that gave them the first land victory in the Pacific.

The battle did not hinge on technology or firepower, but the human element of leadership and character. It turned the tide of the war and began the long offensive toward victory two years later. This vital moment occurred 80 years ago, and this battle on a small island in the Pacific defined the American fighting spirit in the Far East.

#OnThisDay in 1942 the Battle of Guadalcanal begins, marking a turning point in #WWII as the first decisive victory for the Allied forces in the Pacific theater. This map from our collection shows the position of American and Japanese forces in the region. https://t.co/8uoHk4AQ8Z pic.twitter.com/17ksgLNrLp

From the outset of the war, the Japanese had an unbroken string of successes: attacking Pearl Harbor, sweeping Britain out of Malaysia and Singapore, and capturing the Philippines. The Japanese were island hopping southeast toward Australia. The war would be decided in these small island chains.

Following the battles at Midway and the Coral Sea, the stage was set for the first clash between American and Japanese troops. American intelligence learned that Japan was building an airstrip on Guadalcanal, a larger island in the Solomon Islands. The American force of 6,000 Marines landed on the island unopposed. Soon after the Japanese launched attacks to retake the island.

The Battle of Guadalcanal is divided into several phases of land and sea clashes. The naval battles mainly took place north of Guadalcanal and became known as “Iron Bottom Sound” because of all the ships that disappeared beneath the waves. Both sides sustained heavy losses. The naval battles mainly took place at night and involved both aircraft carrier action and battleships exchanging volleys of fire. The naval conflict on November 19 stopped vital supplies from reaching the Japanese forces and was decisive.

The Battle of Savo Island was the first major naval battle in the Guadalcanal campaign and took place on August 9, 1942. @USMC landed on Guadalcanal two days prior, and were occupying Henderson Field, while Japanese forces conducted a surprise attack on the Allied naval forces. pic.twitter.com/RN8cgmNnwH

The land battle was equally ferocious. The American defense centered around Henderson airfield. The Japanese counterattacked with multiple offensives over the next seven months. Eventually, the Marines had 11,000 men centered on the airfield. Between September 13 and 14, the men of the 1st Raider Battalion fought an epic battle under the leadership of Col. Merritt Edson. The 800 men under Edson’s command tenaciously held their ground against 2,500 Japanese troops. The conflict, which became known as the Battle of Edson’s Ridge, cemented the Raiders in Marine lore and won Edson the Medal of Honor. His inscription read in part:

When the enemy, in a subsequent series of violent assaults, engaged our force in desperate hand-to-hand combat with bayonets, rifles, pistols, grenades and knives, Colonel Edson, although continuously exposed to hostile fire throughout the night, personally directed defense of the reserve position against a fanatical foe of greatly superior numbers. By his astute leadership and gallant devotion to duty, he enabled his men, despite severe losses, to cling tenaciously to their position on the vital ridge, thereby retaining command not only of the Guadalcanal airfield, but also of the 1st Division’s entire offensive installations in the surrounding area.

By October, the Japanese had 36,000 troops on the island and began a ferocious attack, in complete disregard for their own lives and casualties. Two Japanese regiments nearly broke through the defenses, with only the 1st Battalion of the 7th Marine Division, commanded by Lieut. Col. Chesty Puller, standing in the way. It was this battle that would make Puller the most legendary Marine in the Corps’ history. Puller had already won one Navy Cross, the second highest decoration in the Navy, in September by rescuing some of his men who were surrounded. He had done so by orchestrating a daring amphibious landing behind enemy lines. He won a second Navy Cross for the defense of Henderson airfield. Puller would win a total of five Navy Crosses in his career.

This victory in October, combined with the naval victory in November, ensured that the Solomon Islands would be in Allied control. “Never again in the three months before their final evacuation of the island did the Japanese attempt to launch such an impressive threat to our vital positions in the eastern Solomons. Much hard fighting on both sea and land remained to be done before Guadalcanal was ours, but the decisive action had been fought—and won,” the U.S. Navy wrote in its official history.

Guadalcanal turned the tide of the war, in which the United States began a long string of victories.

In a time when America is falling apart, this history teaches an important lesson: character matters. God provided many miracles to help the Allies win World War ii, but the West needed the character to choose to fight against evil. Those young men could have run away from the relentless waves of Japanese attackers, but they didn’t: They chose to stay and fight. In our day, men of character, leaders like Chesty Puller, have been removed (Isaiah 3:1-3). America is being cursed because of national sins against God.

Yet there is an even bigger lesson to take away from this 80-year anniversary. The Bible prophesies that America will lose World War iii. It is an unpleasant thought to consider, but that is the truth. You can see the storm clouds coming; the crisis is mounting on the horizon. But what should you do about it? The late Herbert W. Armstrong wrote in The Wonderful World Tomorrow—What It Will Be Like:

Of course many see only the glitter, glamour and tinsel of today’s world and think it is good. They see the temporary pleasures, blind their eyes to the hard cold facts of reality. Others, more aware of the world they live in, seek escape to remote, unspoiled areas, where they can start anew, “away from it all,” and in harmony with the ecology. However, there isn’t really anywhere to go—remember the man who, before World War ii started, thought the safest place to be was Guadalcanal?

Guadalcanal was one of the worst places on Earth to be. But the next world war is going to be even worse. God is warning you now so you can take action, avoid suffering, and understand God’s plan. It all starts with taking brave, determined action spiritually, like those men who fought 80 years ago. This present evil world is going to be replaced with God’s world, the wonderful World Tomorrow, where there will be no more war, hatred or suffering. Soon the history of war will be exactly that—history!

To learn more about this future and what you can do now, please read The United States and Britain in Prophecy and The Wonderful World Tomorrow—What It Will Be Like.