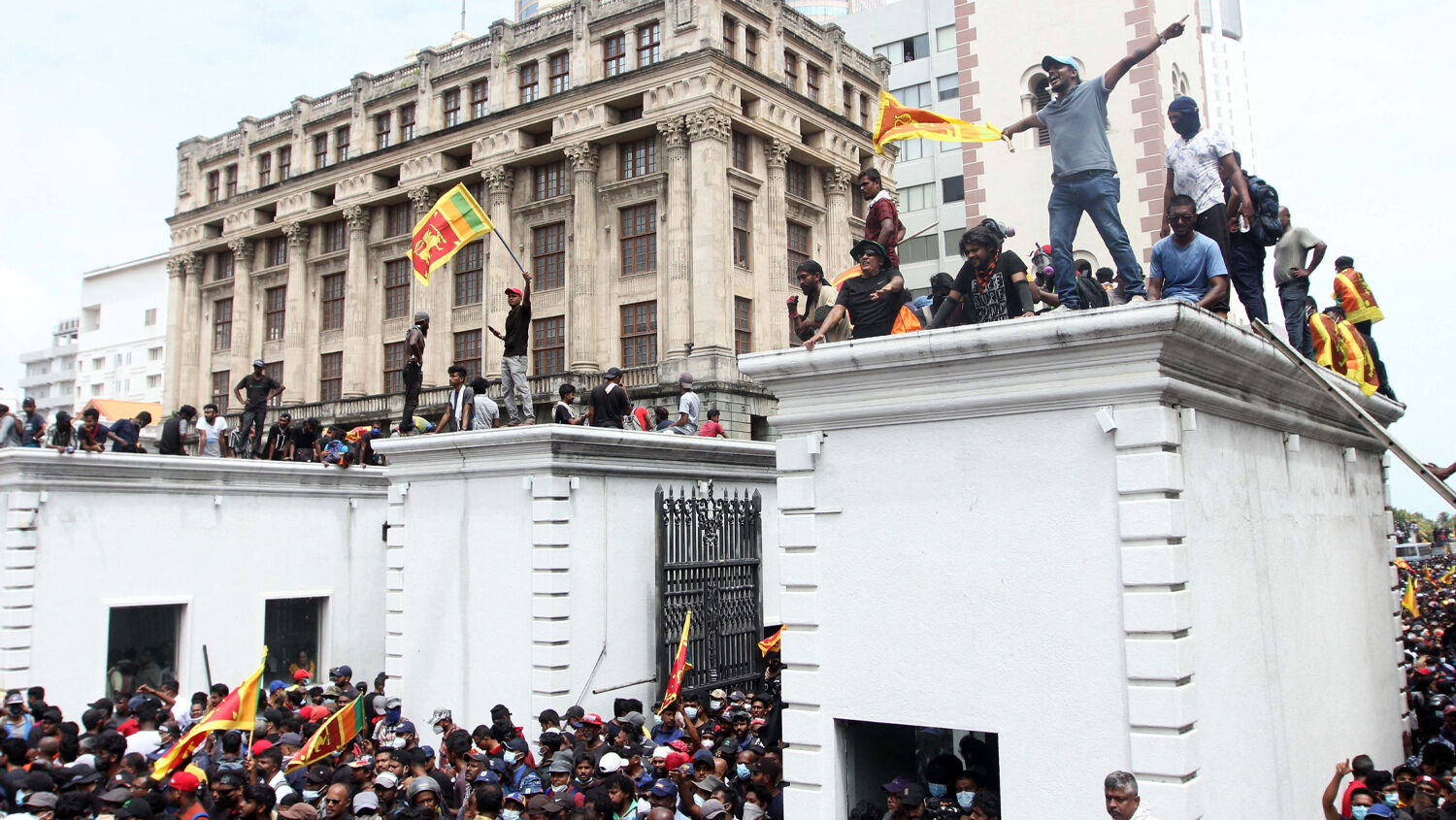 A chilling look at when government and society collapse

Revolutions can violently change the course of history. They erupt with ferocious momentum, toppling everything in their path and leaving instability in their wake. Often the dramatic scenes are burned into our memories and history books: common people storming government buildings, displays of raw emotion, and the chilling, instant judgment of their former masters. Whether it was the American or French revolutions, these turning points happened after a prolonged increase of grievances, government failings, and corruption that slowly brought the pot to a roiling boil before it overflowed.

What just happened in Sri Lanka could turn out to be one of these history-changing revolutions.

On July 9, thousands of Sri Lankans traveled to the capital city of Colombo to continue protesting the disastrous government of the Rajapaksa family. The nation has run out of fuel, food and money. It has been gripped by violence and unrest for weeks, and the pot finally boiled over on Saturday as the massive crowd stormed the seat of governmental power, the Presidential Secretariat.

Sri Lankans tore down police barriers, and authorities resorted to using tear gas and water cannons as the crowd steadily made its way toward the seat of the government. Even the police and military firing live bullets over the heads of the protesters could not stop the wave of humanity. The official residence of the prime minister was also stormed, and his private home burned to the ground. Both the president and prime minister have agreed to resign and are at secure locations or planning to flee the country.

Sri Lanka is a small island nation off the coast of India, far away in Asia. How can a revolution in this small, inconsequential country possibly change the course of history? The French Revolution sparked off an “age of revolution” that spread across the Continent and altered the course of events. What happened in Sri Lanka could be the beginning of a new age of revolution that will spread over the world. Yet instead of the 18th-century shift toward democracy, we will live through a shift toward anarchy and dictatorship.

Bible prophecy indicates that there would be a period of massive instability, revolution and violence in the last days. This revolutionary spark will set ablaze the United States, Britain, the Commonwealth nations and other Western nations. Trumpet assistant managing editor Richard Palmer wrote in “Could America Soon Look Like Sri Lanka?”: “But perhaps the most surprising thing about it is that so many of the factors behind it are present also in the U.S. The crisis shows how things that we know are bad—inflation, debt, societal division—can become nation-destroying problems.” Now the Rajapaksa family, who had an iron grip on power and billions in funding from China, has been removed from power.

The crisis in Sri Lanka has been building for decades and is self-inflicted. The food and fuel shortages, fiscal collapse and massive debt are all the result of deliberate decisions by a corrupt government. This is exactly what has been happening in the English-speaking nations.

In April 2021, President Gotabaya Rajapaksa banned the use and importation of synthetic fertilizers and pesticides. These environmental policies fundamentally changed how the 2 million farmers in Sri Lanka produce crops. Foreign Policy wrote: “The result was brutal and swift. Against claims that organic methods can produce comparable yields to conventional farming, domestic rice production fell 20 percent in just the first six months. Sri Lanka, long self-sufficient in rice production, has been forced to import $450 million worth of rice even as domestic prices for this staple of the national diet surged by around 50 percent. The ban also devastated the nation’s tea crop, its primary export and source of foreign exchange.” This year most farmers can’t afford to farm, or don’t have fuel to harvest the crops.

Does this sound familiar? Isn’t the radical-left government in the United States aggressively pursuing environmental policies that will affect food supply and other essential parts of the economy? This self-imposed collapse of Sri Lanka’s most important industries is the same as Joe Biden deliberately shutting down the oil and gas industry. This is on top of drought and other natural disasters ravaging America.

What made this crisis unescapable for Sri Lanka was its crushing debt. The country is over $50 billion in debt, with China holding 10 percent of its foreign debt load. The United States is in a similar position as Mr. Palmer wrote: “The U.S. is also borrowing like there’s no tomorrow. Compared to the size of its economy, U.S. debt is even bigger than Sri Lanka’s. At over $30 trillion, U.S. debt is 125 percent the size of its annual economic output, compared to Sri Lanka’s 104 percent. Generally, over 90 percent is considered the ‘danger zone’ where the economy risks collapse.” China currently holds 3.7 percent of U.S. debt, nearly $30 trillion. Sri Lanka fell into China’s debt trap, and the Communist juggernaut has the American economy by the neck.

The leaders who embraced these radical and self-serving policies in Sri Lanka are now gone, but the country is still broken and unstable. Sri Lanka remains vulnerable to foreign invasion or coercion financially to become a de facto vassal state. Mr. Palmer continued: “It’s clear that a lot of immorality has caused Sri Lanka’s collapse. We’re guilty of similar immorality, and it will have similar effects.” Bible prophecy shows that the United States and Commonwealth nations will suffer a similar societal collapse. The dramatic scenes occurring right now in Sri Lanka will happen in the English-speaking world—only the Bible indicates it will be much more violent and deadly. Sri Lanka is a warning for all of us.

Please read our article “Could America Soon Look Like Sri Lanka?” and our free book Ezekiel—The End-Time Prophet for more details on the revolution that will happen in our nations.