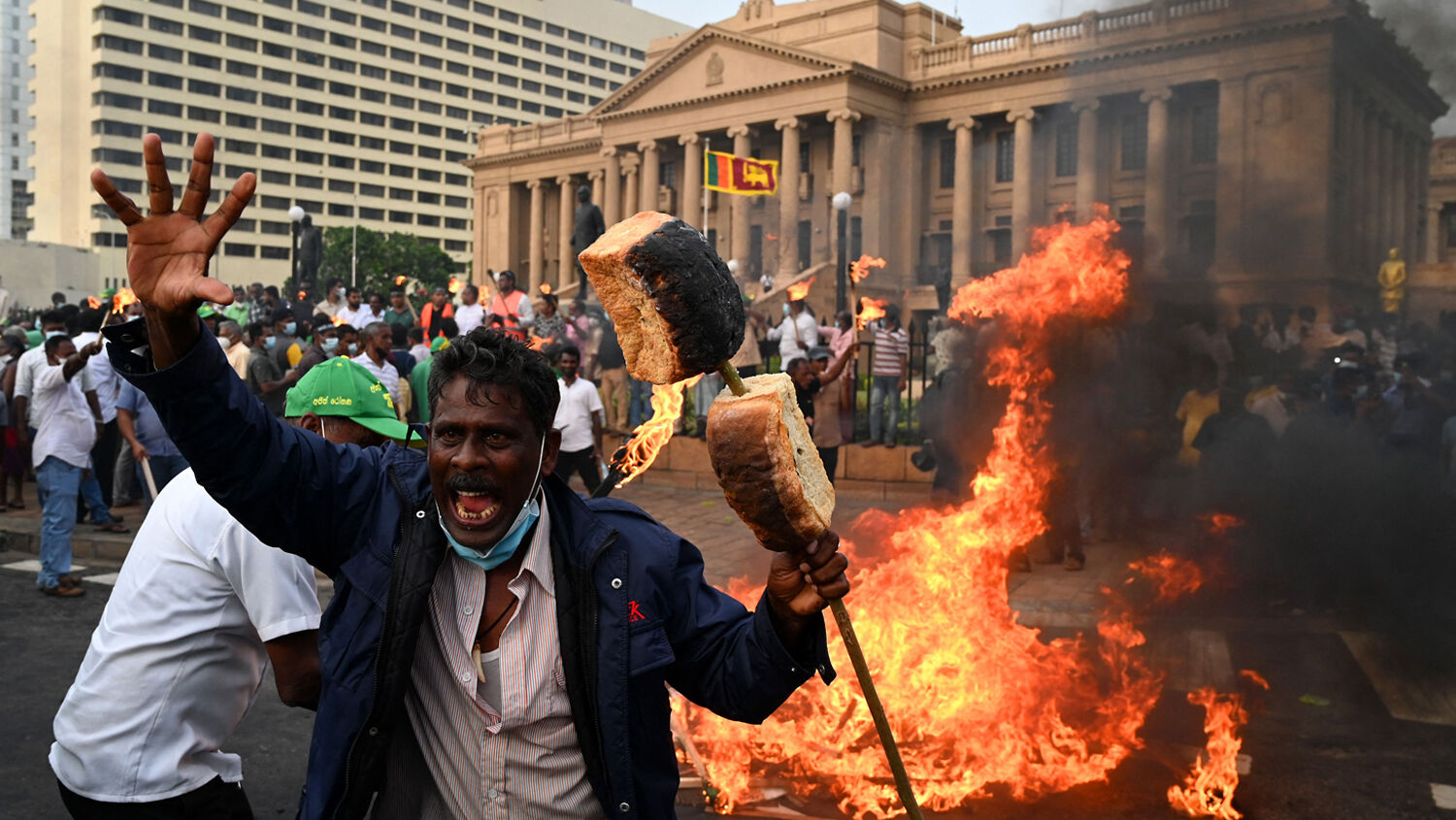 An opposition activist shouts slogans holding up bread as he protests along with others against rising living costs, at the entrance of the president’s office in Colombo on March 15.
ISHARA S. KODIKARA/AFP via Getty Images

Sri Lanka is broken. Thousands queue daily outside petrol pumps for their ration of four gallons of fuel. Armed police, by law, guard each pump, stopping fights. Lined up for eight hours in the heat of the day leads to frayed tempers. Some have even died while queuing.

Fuel prices have doubled. Vegetables are now five times more expensive than last year. Rice is up 30 percent. People have a choice: Shop at a private supermarket, or spend all day in the queue at a government-run shop, where prices are three to four times lower.

At the other end, farmers can’t sell their food—they can’t get the fuel to transport them to the market.

Fuel shortages are also hitting the power industry. The government has ordered 10-hour blackouts. Many are getting by on generators, which makes the queues at petrol stations even longer.

With prices going up everywhere, everything is shutting down. Rickshaw drivers can’t afford petrol, have no income, fall behind on their vehicle payments, lose their whole business. Print shops can’t afford paper and have to close, sending all their workers home. Schools are also shut because paper is too pricey.

With their budgets occupied with fuel purchases, people have little money left for luxuries. Even the middle class that was once comfortable is struggling to feed their families. Sellers of non-essential goods no longer have customers. People who once enjoyed holidays and meals out can no longer afford meat, or even hot food.

Many are taking to the streets. Sri Lanka is experiencing some of its biggest protests in history. Police opened fire on protesters in the town of Rambukkana, killing one and injuring 14 others.

Religious and ethnic tensions that had laid dormant now threaten to explode at any moment. The government is trying to crack down on the protests by declaring a state of emergency, arresting opponents and censoring the Internet.

It’s the worst economic crisis in Sri Lanka’s history. But perhaps the most surprising thing about it is that so many of the factors behind it are present also in the U.S. The crisis shows how things that we know are bad—inflation, debt, societal division—can become nation-destroying problems.

Sri Lankan politics is dominated by one family: the Rajapaksas. Mahinda Rajapaksa first came to power as president in 2005. He’s now prime minister, while his brother Gotabaya Rajapaksa now holds the presidency. It looks a lot like nepotism, but the family insists they’re simply choosing the best men for the jobs. And it just happens to be that around 40 family members are best qualified for various government jobs.

In 2015, the Rajapaksas temporarily lost hold of office. They were accused of fraud and money laundering, stealing government money and stashing it abroad. The Seychelles and Indian governments promised to help track the funds.

But on Easter Sunday, 2019, the country took a very different turn. Islamist bombings killed 270 people. Suddenly, allegations of corruption didn’t seem as important. Mahinda Rajapaksa had a reputation as a strongman, who won the war with Tamils, which ended in 2009. That autumn he was voted back into office. Unsurprisingly, the investigations have gone nowhere.

Sri Lanka is a “democratic socialist” republic, with many industries under government ownership, such as the main electricity company, the Sri Lankan Airline and free universal health care. This gives anyone in government access to a lot of lucrative jobs, and a lot of cash.

Widespread corruption opens the door to foreign powers. Someone willing to toss out lucrative jobs to his family members is also the kind of person willing to direct funds to his hometown, to shore up his local support.

Under the Rajapaksas, many infrastructure projects were given to China without any form of competitive bidding. They were handed to Chinese companies, who were paid above-market price. Chinese money has also flooded into what Forbes called “the world’s emptiest airport,” the Mattala Rajapaksa International Airport, near the Rajapaksa’s hometown, Hambantota. Chinese money also helped build Mahinda Rajapaksa International Cricket Stadium in Hambantota, which holds more seats than the town center’s population can fill. At the end of Mahinda Rajapaksa’s second term, in 2015, nearly 70 percent of the country’s infrastructure projects were funded by China.

All this has been funded by $7 billion borrowed from China.

Sri Lanka has become the poster child for China’s “debt-trap diplomacy.” China lent Sri Lanka around $1 billion to build a new port in Hambantota. When the port proved unprofitable, and Sri Lanka couldn’t pay it back, China took it over on a 99-year lease. “The acquisition provided Beijing with a deepwater port in the region in which it can dock its navy, off the coast of its key regional competitor, India,” Foreign Policy wrote.

But not all of this money flowed to Beijing. In 2018, the New York Times reported that millions of dollars flowed directly from Chinese port construction funds to the 2015 Rajapaksa reelection campaign. The Chinese ambassador lobbied voters to support the family’s allies. For years prior to the vote, the Rajapaksas were consistently dogged by accusations that they’d taken bribes from Chinese government-controlled companies.

Spending for all these programs was fueled by massive debt. In 2010, Sri Lanka’s foreign debt was 36 percent of its annual economic output. By 2015, it was at 94 percent. One third of government revenue went to paying off Chinese debt.

Now the country owes $51 billion to foreigners; $7 billion of which was due to be paid back this year. But the country only has $1.6 billion of foreign cash on hand. So last week, they defaulted on part of that debt.

Sri Lanka has been trying to get a hold of foreign currency to pay off its debt. Meanwhile, potential investors have seen the writing on the wall; they don’t want to be holding currency from an economy going under. Combine that with money printing and the value of the Sri Lankan rupee having plummeted. This has made imports explosive, leading to the explosion in the cost of fuel and hyperinflation. Inflation hit 20 percent this month; for food, it is 30 percent.

It’s clear that there are special causes for this bankruptcy. Sri Lanka generated a lot of foreign income through tourism. When covid hit, that dried up. So too did the money that Sri Lankans living overseas sent back to their families.

The government also made things worse, abruptly banning the import of pesticides and forcing the country to switch to organic farming last year. In the long run, moving away from pesticides and herbicides has a lot of advantages. But it’s not a change that can easily be made at the drop of a hat. Food output plummeted, and the country had to import more, worsening its economic situation.

Drought has also played a role. Forty percent of Sri Lanka’s electricity typically comes from hydropower. But now the lakes are running low.

But the long-term causes are important too. Sri Lanka’s massive borrowing made it fragile, so that when a crisis came along, the economy disintegrated.

Could It Happen to You?

Corruption, dodgy links to China, massive debt, money printing—all these ingredients to total breakdown are present in the U.S. Hunter Biden’s dealings with Chinese businesses are reminiscent of some of the Rajapaksas’ dealings. And of course these include a cut for “the big guy.”

The U.S. is also borrowing like there’s no tomorrow. Compared to the size of its economy, U.S. debt is even bigger than Sri Lanka’s. At over $30 trillion, U.S. debt is 125 percent the size of its annual economic output, compared to Sri Lanka’s 104 percent. Generally, over 90 percent is considered the “danger zone” where the economy risks collapse.

The U.S. is also struggling with the effects of drought. Farming is already in trouble, and power generation could suffer too. Just like Sri Lanka, America imports dramatically more than it exports, having to sell much of its currency to cover the shortfall. And America is also rapidly printing money. About 30 percent of all dollars in circulation were created since covid hit.

The big difference is, the U.S. dollar is the world’s reserve currency. Despite a series of horrible decisions, people are still willing to buy it: They need to, to engage in international trade. Even so, inflation is starting to bite, at 8.5 percent.

No one thinks that corruption, inflation or debt are good things. But it’s easy to lose sight of how destructive they can be. Sri Lanka shows that they have potential to be nation-destroying problems. And the U.S. is walking down the same path.

“True education is founded on cause and effect,” wrote Trumpet editor in chief Gerald Flurry. We are doing the same things that are causing catastrophe in Sri Lanka. They will have the same effect.

In January 1920, with the U.S. economy in full boom, statistician Roger Babson forecast “the worst business depression that our generation has ever experienced.” He could accurately forecast it because his models revolved around cause and effect.

Babson said that “there are laws that govern economic conditions. These laws are the factors which determine what conditions will be, a few months or a year from now. They are the causes.”

To forecast the economy, Babson said, “I looked at the way people as a whole were dealing with one another. I looked to the source which determines future conditions. I have found that that source may be defined in terms of ‘righteousness.’” More righteous behavior leads to prosperity; corruption to ruin.

This is a profound observation from a statistician. Herbert W. Armstrong related this incident in his autobiography and lauded Babson for his wisdom.

It’s clear that a lot of immorality has caused Sri Lanka’s collapse. We’re guilty of similar immorality, and it will have similar effects.

Soon all nations will be forced to confront this lesson. But you do not have to wait to learn it. You can apply principles that will cause prosperity in your life now. We have a booklet on that topic, titled Solve Your Money Troubles! But this is more than a financial lesson. There is a whole way of life that causes blessings and prosperity. You can read about that in our free book Mystery of the Ages, by Herbert W. Armstrong.