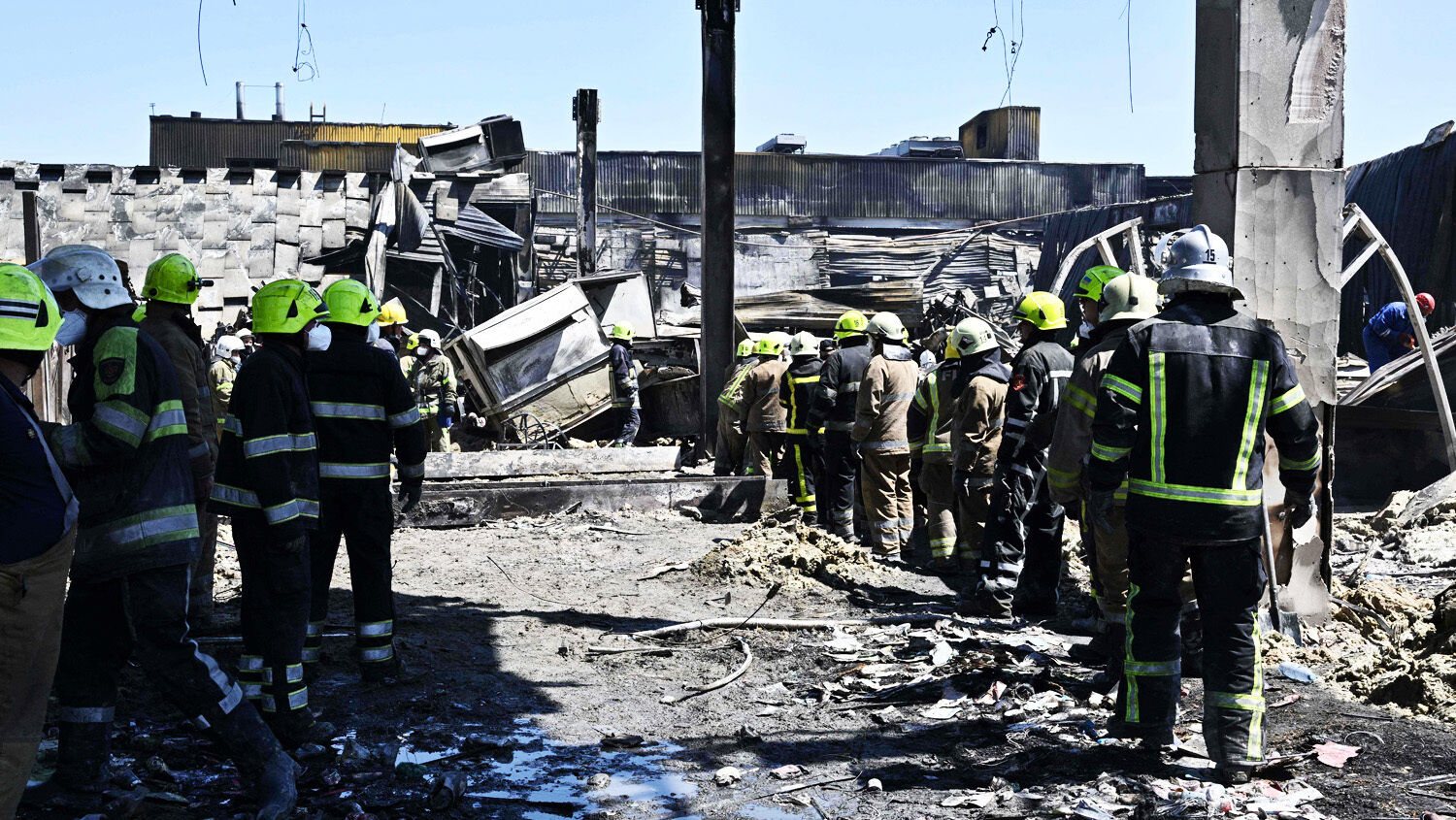 Workers are clear the rubble of the Amstor mall in Kremenchuk on June 28, the day after it was hit by a Russian missile strike.
GENYA SAVILOV/AFP via Getty Images

The barbaric attack is yet another Russian strike that intentionally killed large numbers of Ukrainian civilians.

“We sent him messages, called, but nothing.” Ukrainian national Kiril Zhebolovsky spoke these words to Reuters yesterday about his friend who was working in an electronics store in a shopping mall in the city of Kremenchuk when two Russian missiles hit the facility. Ukrainian authorities said the missiles were long-range X-22s launched by Tu-22M3 bomber jets from the skies over Russia’s Kursk region.

Dmytro Lunin, governor of the region that includes Kremenchuk, wrote on Telegram that 18 people were confirmed dead from the attack. He said the figure is expected to rise as rescuers continue to clear the rubble. So far 59 people have been counted among the wounded.

The Russians shelled a shopping mall in the city of #Kremenchuk. More than a thousand civilians were there. The mall is still on fire. There are ambulances and fire trucks. pic.twitter.com/t0vpyh28Wy

Ukrainian President Volodymyr Zelenskyy cited reports that more than 1,000 people were in the mall at the time of the strike and said, “It is impossible to even imagine the number of victims.”

Videos from the scene showed thick plumes of smoke rising from burning buildings, as emergency crews worked to rescue survivors and locate bodies.

Russia’s shopping mall attack in Kremenchuk is a direct attack on Ukrainian civilians. It is not close to any military target. pic.twitter.com/RYdm6wKSYZ

Video of the Russian Kh-22 missile strike on the shopping mall in Kremenchuk yesterday from a nearby park. https://t.co/jYOp0IduRM pic.twitter.com/XaCJO3G2Nw

Another burnt body rescued from the rubble of the shopping mall in #Kremenchuk. Rescuers say it could be the 14-year-old girl, that was missing. But no sure way to say yet.#StandWithUkraine️ #ArmUkraineNow pic.twitter.com/eJl4Tvdlh7

Zelenskyy said the mall posed “no threat to the Russian Army” and had “no strategic value” as a target. He said Russian President Vladimir Putin was targeting “people’s attempts to live a normal life, which make the occupiers so angry.”

The shopping mall strike comes as Russia has stepped up missile strikes across Ukraine in recent days, likely to coincide with the G-7 summit, during which the United States and its partners are planning further support of Ukraine.

The attack is reminiscent of Russian strikes earlier this year that killed numerous Ukrainian civilians, such as the Bucha massacre that killed at least 280, the assault on a Mariupol theater that killed some 600 mostly women and children, and the targeting of a train station in Kramatorsk that killed more than 50 civilians as they tried to flee the area. There was also a March 17 attack on Kharkiv’s Barbashovo market and a missile strike on Kyiv’s Retroville mall three days later that killed eight people.

Zelenskyy agrees with this view. “Russia continues to take out its impotence on ordinary civilians,” he said on June 27, adding that it is “useless to hope for decency and humanity on its part.” Zelenskyy called the strike on the Kremenchuk mall “one of the most daring terrorist acts in European history.”

#Russia is clearly a state sponsor of terrorism. Today alone they hit a shopping mall (featured below) and the last market in a city of #Ukraine . There was no military value: Only civilians trying to live.

Russia’s intentional and repeated targeting of civilians is wicked beyond words and means the nation deserves to be designated as a terrorist entity. It is unsettling to talk or even think about these occurrences, and many in America have become fatigued by the news of Russia’s war on Ukraine. But the Bible admonishes us not to turn our faces away from this sort of evil. Isaiah 33:18 says our hearts must “meditate terror.”

Trumpet editor in chief Gerald Flurry commented on this passage during a 2013 lecture, stating: “[W]e we can’t just shut it out of our minds and go watch television or read a book or go see some sporting event or whatever if it’s used to escape this. God says, I want you to think about it, and I want you to understand it, and I want you to proclaim it to this world! … He says you’d better meditate on it. You’d better see how bad it really is.”

As much as we would prefer to escape into some form of entertainment and avoid contemplating Russia’s war of aggression, the civilians being slaughtered, and the hundreds of thousands being deported to Russia, we need to meditate on these atrocities. We need to think about the evil and suffering of this world and consider its causes—and consider our lives.

But at the same time, we must also meditate on the Bible’s detailed promises of a new world—a world of lasting peace and prosperity—that is coming soon.

To better understand the need to think deeply about the atrocities in Ukraine, and to learn about the profound hope that is connected to these developments, read “Why You Need to See the Horror in Ukraine” and Mr. Flurry’s free booklet The Prophesied ‘Prince of Russia.’