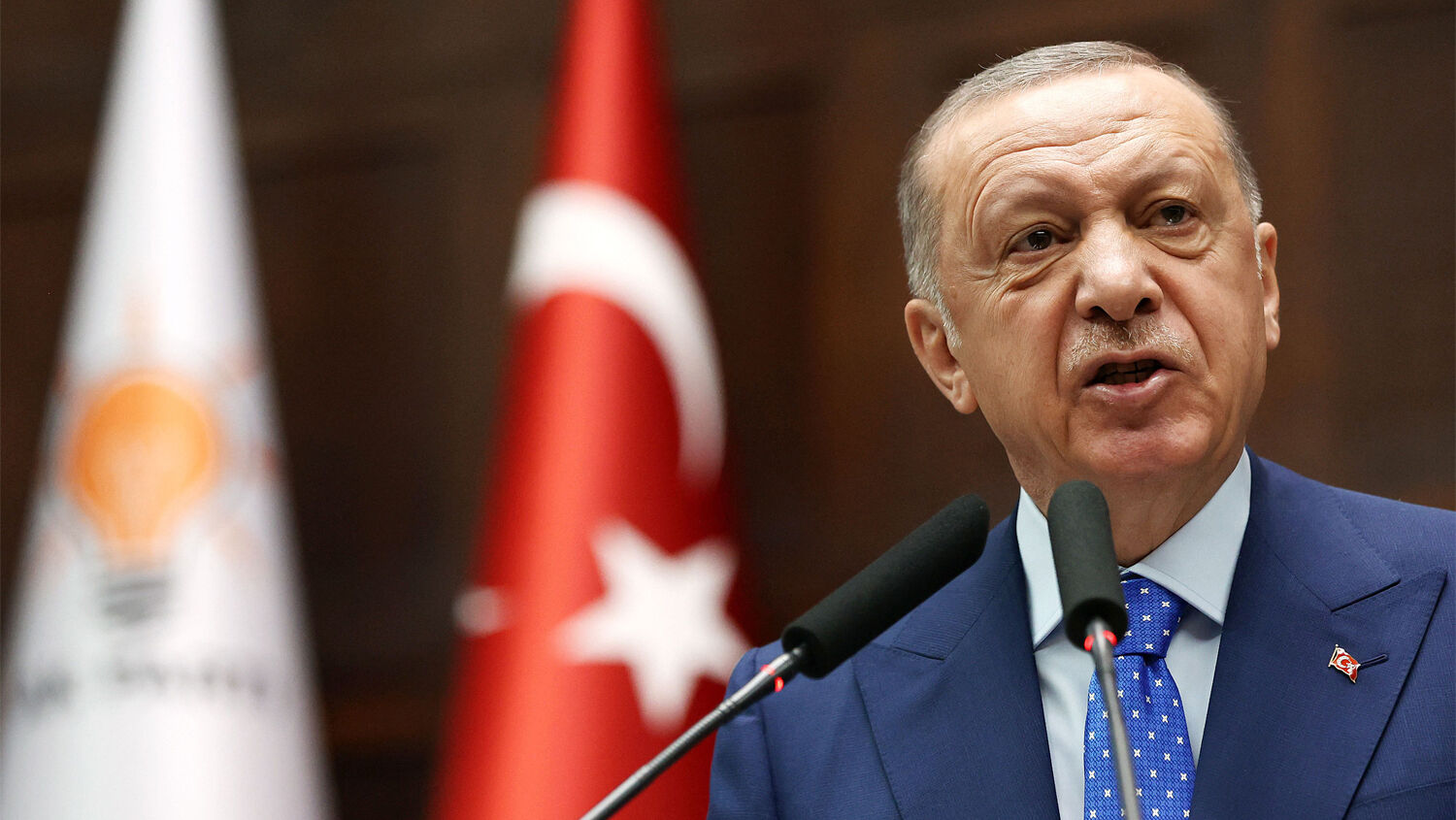 Where Ankara’s spat with the West is leading

Last month, Finland and Sweden announced their intentions to join the North Atlantic Treaty Organization. Russia’s war in Ukraine has spooked them enough to abandon neutrality. Major nato member states like the United States and the United Kingdom offered their full support. Yet almost a month later, Finland and Sweden are no closer to joining.

Integrating two new member states would obviously take time. It took over a year for North Macedonia, nato’s newest member, to enter the alliance. But Finland’s and Sweden’s applications are stalled by a particularly thorny roadblock. And it’s a roadblock that doesn’t seem to be leaving soon.

That roadblock is Turkey.

For a new country to enter nato, it needs the approval of all 30 current member states. And Turkish President Recep Tayyip Erdoğan has so far refused to approve Finland’s and Sweden’s membership bids. “We are currently following developments regarding Sweden and Finland,” Erdoğan said, “but we don’t feel positively about this.”

What are Ankara’s motives?

One of Erdoğan’s main issues is Sweden’s alleged support of Kurdish terrorists. Turkey has been fighting a guerrilla war against the Kurdistan Worker’s Party (pkk). The pkk is a far-left organization recognized as a terror group by Turkey, the United States, the European Union (to which Sweden belongs) and other Western democracies. Sweden’s generous refugee policies have allowed many Kurdish militia members refuge from the Syrian Civil War. Among those are members of the People’s Protection Forces (ypg), a Syrian pkk-affiliate that supported the West in the war against the Islamic State. The ypg claims it has “ideological connections” with the pkk but no formal links.

Part of Sweden’s dilemma is that the current Social Democrat government does not have a majority in the Riksdag (Swedish parliament). It relies on several opposition parties and one independent to stay in power. The independent parliamentarian happens to be Kurdish former guerrilla fighter Amineh Kakabaveh. She’s threatening to cause problems for the government—like voting down the Social Democrats’ budget—if Stockholm makes concessions to Ankara.

On the one hand, Swedish Prime Minister Magdalena Andersson needs Erdoğan to greenlight Sweden’s nato application. On the other hand, her government’s longevity is dependent on the graces of a Turk-hostile Kurdish parliamentarian. At the moment, Andersson is siding with Kakabaveh. Andersson gave Kakabaveh assurances she “would not compromise with Turkey over its nato bid,” according to the Financial Times. This was to ensure Kakabaveh’s support in Swedish Justice Minister Morgan Johansson’s recall vote.

It looks like Erdoğan’s demands to cut ties with the ypg won’t be heeded.

Erdoğan’s other demands include cutting ties to supporters of Fethullah Gülen, an exiled Muslim preacher and political opponent blamed for Turkey’s failed 2016 coup. Gülen is currently living in exile in the United States.

It could also be that Erdoğan’s real wishes have nothing to do with Sweden—but rather that he’s waiting to be bought off with some other bauble—access to U.S. weapons that they’ve been denied so far, for example.

Finland, meanwhile, is considered “collateral damage” in the negotiations. Erdoğan has focused his grievances more on Sweden. But both Stockholm and Helsinki’s nato applications are under threat until his demands are met.

Turkey is a unique country. It’s partly in Europe and partly in Asia. Its Muslim heritage points it east, but Istanbul’s history as one of Christianity’s leading cities also points Turkey west. For most of its modern history, Turkey has been a Western, secular, European democracy. In the 1950s, the Soviet Union was strong and directly bordered Turkey. Ankara was an obvious candidate for nato enlargement and joined in 1952.

It would be incorrect to claim Turkey hasn’t been a contributing member of nato. It has the alliance’s second-largest active military. But events like the spats with Sweden and Finland show that Turkey’s allegiance with the West is limited. Even with a major European war in Turkey’s neighborhood, Ankara isn’t willing to set aside its local ambitions for the sake of strengthening its alliance.

This isn’t the first time Turkey has caused problems within nato. In 2019, Ankara had a spat with the U.S. after it purchased a Russian missile system and was kicked out of a U.S. F-35 fighter jet program. There is also the question of American nuclear weapons in Turkey. Like other countries in Europe, the U.S. stores nuclear weapons in Turkey as a relic from the Cold War. These are officially under joint U.S.-Turkish control. But how much control Washington actually has over these weapons is questionable.

For America, and nato in general, Turkey is at best an unreliable ally. At worst, it’s a betrayal waiting to happen.

The Trumpet bases its news analysis on Bible prophecy. And Bible prophecy has plenty to say about Turkey’s relationship with America.

Psalm 83 describes an alliance of various Middle Eastern peoples banding together to, as verse 4 states, “cut [Israel] off from being a nation; that the name of Israel may be no more in remembrance.” (The prophetic identify of “Israel” includes America; please request a free copy of The United States and Britain in Prophecy, by Herbert W. Armstrong, to learn more.) Verse 5 specifically lists them as being “confederate” together.

Verses 6-8 show who belong to the alliance: “the tabernacles of Edom, and the Ishmaelites; of Mab, and the Hagarenes; Gebal, and Ammon, and Amalek; the Philistines with the inhabitants of Tyre; Assur also is joined with them.”

Such an alliance has never formed in history. This means this psalm is prophetic. But the meaning is hidden unless one understands the modern descendants of these ancient peoples. Trumpet editor in chief Gerald Flurry’s free booklet The King of the South goes into the details of these peoples’ modern identities. For our purposes, we’ll focus on one of the peoples mentioned: Edom.

The Plain Truth, our predecessor magazine, wrote the following in July 1957:

Esau, or Edom, as he is also called, lived southeast of Palestine near Petra. Arab Bedouins live there now. Then where have Esau’s children gone?

From the days of Nebuchadnezzar, who carried them captive, they disappear for 1,000 years from history. Then suddenly we find Amalek the name of a city in Turkestan in Central Asia (from Paul Herrmann’s Sieben vorbei und Acht Verweht). The Egyptians used to call the Amalekites Amu. In Turkestan is the River Amu today! In Bible times the Edomites inhabited Mt. Seir (Genesis 32:3). In Turkestan is the Syr Darya—the River of Syr, or Seir.

The leading Turkish tribe is the Ottoman. The prophecies referring to Edom or Esau mention Teman as the leading tribe in these latter days (Obadiah 9). The conclusion is inescapable. The Ottoman Turks are the sons of Teman. Merely the vowels in spelling have been changed over these past millenniums. From Central Asia the Turks, or Edomites, moved into Asia Minor. That is where Esau’s children live today! Turkey controls the “crossway” of the nations—the Dardanelles (Obadiah 14).

How clear, Esau, or Edom, is Turkey today!

Edom (Turkey) is a part of the conspiracy to “cut America off from being a nation.” The friction with nato today is a small harbinger of this coming Turkish double-cross.

It’s a relatively minor spat today. But Bible prophecy states that Turkey’s relations with the West will take a much more dangerous turn in the near future. To learn more, please read our free reprint article “Turkey: An Act of Revenge!” Also request a free copy of The King of the South to learn what the Bible prophesies for the Middle East today.