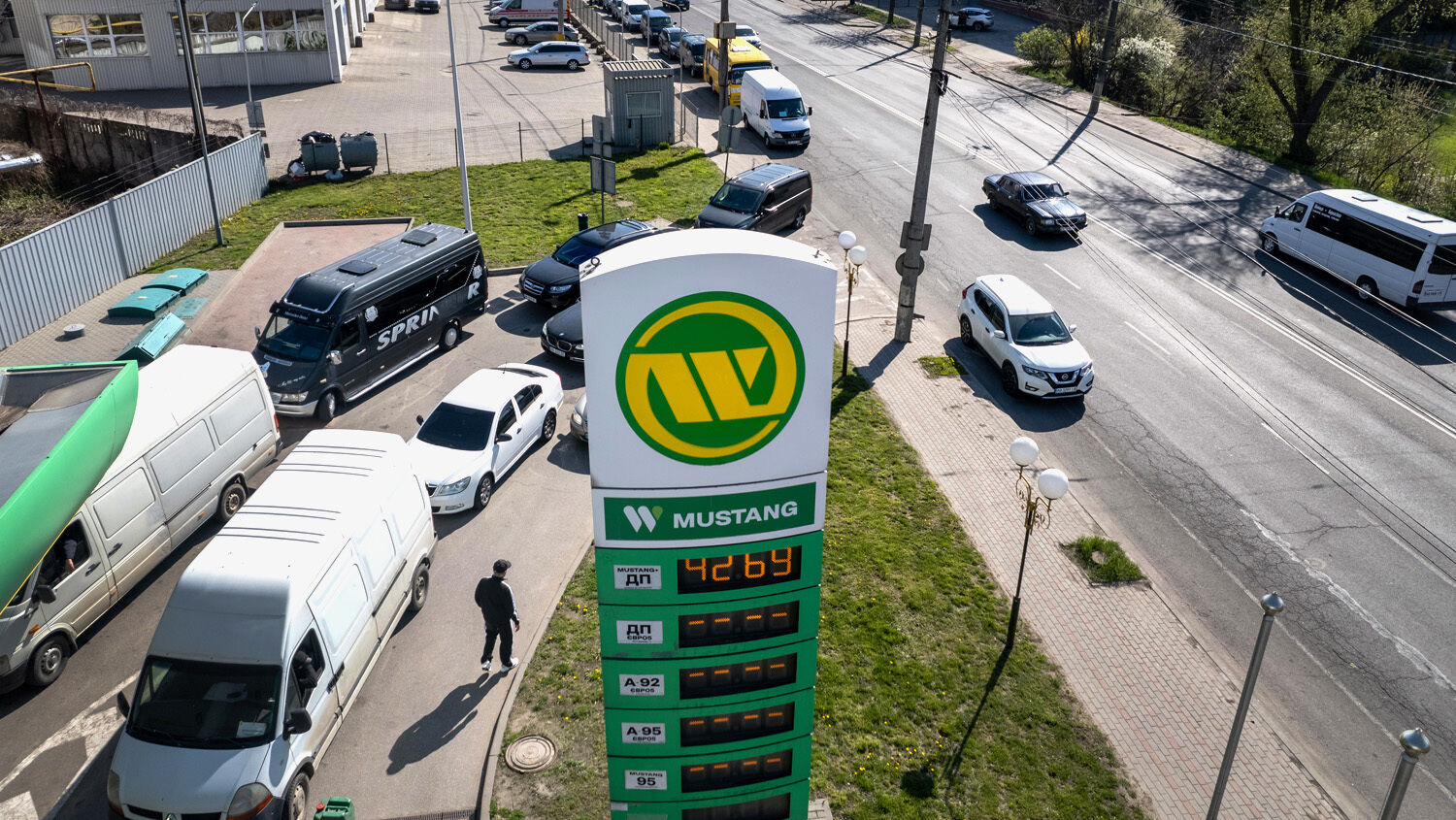 Cars queue in long lines for fuel on May 1, in Vinnytsia, Ukraine. Russian attacks on Ukraine’s petroleum infrastructure and a global spike in oil prices have led to nationwide shortages of fuel.
John Moore/Getty Images

Sanctions have hit consumers around the world, but perhaps benefited Russia.

The threat of sanctions was meant to stop Russian President Vladimir Putin from invading Ukraine. The imposed sanctions were intended to stop the Ukraine war. But as the war continues, Russia’s economy hasn’t collapsed. In fact, some fear the nation is doing better than before the sanctions. Russia hasn’t yet achieved military victory in Ukraine, but it appears to be winning the economic war.

The world has stood in solidarity with Ukraine. Around the world, people who were previously ignorant of Ukraine’s existence are now wearing its flag. Some have even boycotted Russian vodka. But most countries have continued their dependence on Russian gas and oil, paying even more for it.

There are many indications that Russia is profiting from the war in Ukraine. “Russia’s current account surplus more than tripled in the first four months of the year to $95.8 billion,” Bloomberg wrote on May 16. Elina Ribakova from the Institute of International Finance tweeted that Russia is well on course for a $200 to $250 billion account surplus this year.

Russia’s current account is ~$100bn in Jan-April due to high commodity prices—historically unprecedented.
A preliminary estimate by @bank_of_russia of $95.8https://t.co/7TfLrk60Wc On track for our CA surplus of $200-$250bn in 2022 as imports continue to contract. pic.twitter.com/Aes8Yq2ffN

The European Union wants to completely abandon Russian oil imports by the end of the year. But economists warn that we shouldn’t expect too much from those sanctions. “Around two thirds of Russian oil exports go to Europe,” Rolf Langhammer, a foreign-trade expert at the Kiel Institute for the World Economy (IfW), said. “Even if those completely disappear, the Russian budget still comes out well” (Trumpet translation throughout). The current market price for oil is high and predicted to increase, which means Russia is making a huge profit. When the embargo comes, prices may rise further and buyers, such as China, can partially compensate for Russia’s losses.

When the oil embargo was first announced, prices went up. This means in the six months before the sanctions take effect European nations will pay more. This shows how counterproductive it was to announce the sanctions months in advance. “To announce today that there will be an embargo in six or eight months creates a paradoxical situation,” Guntram Wolff, head of the Brussels-based think tank Bruegel, noted. “It signals to everyone to buy as much oil as they can now and be prepared to pay a high price for it because there might be nothing left in six months. For the next six months, Russia’s cash register will ring. Russia will create a lot of revenue as a result.”

If you consider how friendly Europe has been toward Russia, one could almost believe it wants Russia to benefit.

“In the short term, we won’t get Putin to his knees economically,” Langhammer said. “The Russian state budget is highly solid and quite obviously Putin has been preparing the public finances for war for years. We will need staying power.” Shouldn’t this alarm our policymakers? Could it be that sanctions aren’t working? Will other countries now ignore the threat of sanctions? Will China be inspired to invade Taiwan?

Some dismiss the warning, pointing to Russia’s military failures. Some analysts warn that Russia has saved the best for last. Just this week, some of these fears have been confirmed. Russia’s armored fighting vehicle, unofficially called Terminator, has been deployed for the first time to Ukraine. Why it wasn’t used before raises many questions. Did Russia hope to break the resistance first?

Evidently Russia has the military equipment needed for a strategic advantage—but so far it hasn’t used it. Canadian security expert Colby Badhwar wrote on Twitter: “If these had been deployed in force with crack troops to the fight in Mariupol from the beginning, Russia might have had a chance to capture the city. Instead they disregarded all the lessons supposedly learned in Grozny, and repeated the same mistakes.”

It is undeniable that Russia has suffered many losses, but considering the economic gains it has won by drawing out the war, its overall strategy may not be that foolish.

There is certainly more weaponry Russia has withheld from the invasion. It has avoided large-scale air and sea operations and focused on inexpensive ground maneuvers. Russia has lost a lot of old tanks and helicopters and thousands of soldiers. A heartless dictator may not be concerned with losing old tanks and young soldiers when it has the chance to win a country the size of Ukraine.

Russia also hasn’t lost its most important ally on the European continent: Germany.

From the start, many in Germany hoped Ukraine would surrender to avoid a military confrontation. This was something Ukrainian ambassador to Germany Andrij Melnyk lamented. Germany blocked weapon exports to Ukraine and early meaningful sanctions against Russia. What help Germany did approve for Ukraine was often delayed. Many in Germany have been betting on a Russian victory and didn’t want to upset their trading partner. Even still, it appears that many in Germany hope to keep Russia’s losses as minimal as possible.

Russia’s invasion is also impacting America economically. Regarding the Biden administration’s continuous aid packages for Ukraine, Donald Trump rightly asked: “Why are we giving more than $40 billion to Ukraine while Europe, in comparison, is giving very little?” Russia may be using the war in Ukraine to hurt the U.S. economy.

As Trumpet executive editor Stephen Flurry pointed out, Russia didn’t dare invade Ukraine under a strong U.S. administration. Perhaps Russia waited, not only to increase its chances to win the war in Ukraine, but also to win the war against the U.S.

For the last 30 years, Ukraine has been a relatively free country, primarily due to the U.S.’s dominance. But during weak U.S. administrations, Germany and Russia have grown closer, building gas pipelines and enriching themselves economically. Now it appears that another weak U.S. administration is allowing Europe to support Russia’s war while ruining the American economy.

As the late Herbert W. Armstrong explained in The United States and Britain in Prophecy the rise of the United States was prophesied. But the Bible also reveals that this dominance would end and be succeeded by “the times of the Gentiles” (Luke 21:24). This is one of the many prophecies Jesus Christ delivered but modern Christianity has ignored—primarily because it lacks the understanding of who Israel is. Trumpet editor in chief Gerald Flurry explained:

Gentiles are non-Israelites. Israel is comprised of the descendants of the 12 tribes of ancient Israel. Prophetic Israel in this end time is specifically the birthright nations, America and Britain, and the scepter nation, Judah (the Jewish nation in the Middle East). The scepter nation provides the kings who rule from David’s throne. Soon, all people will become spiritual Israel. (To learn more, request our free book The United States and Britain in Prophecy.)

Israel desperately needs to know how to deal with the Gentiles. It obviously has no idea. Clashes between the Gentiles and Israel, and the Gentiles and other Gentiles, will culminate in the Second Coming. Christ will destroy those Gentile armies when they try to fight Him.

There are a lot of Gentile nations, but the two major powers will be a German-led Europe and a Russia-China alliance.

We are seeing the rise of these two power blocs at the same time that the U.S. is entering economic ruin and global irrelevance. No human being can fix such a crisis. But God has a solution. To undersand the time we live in and to learn where our world is heading, watch Mr. Flurry’s Key of David program “The Times of the Gentiles (2022).”