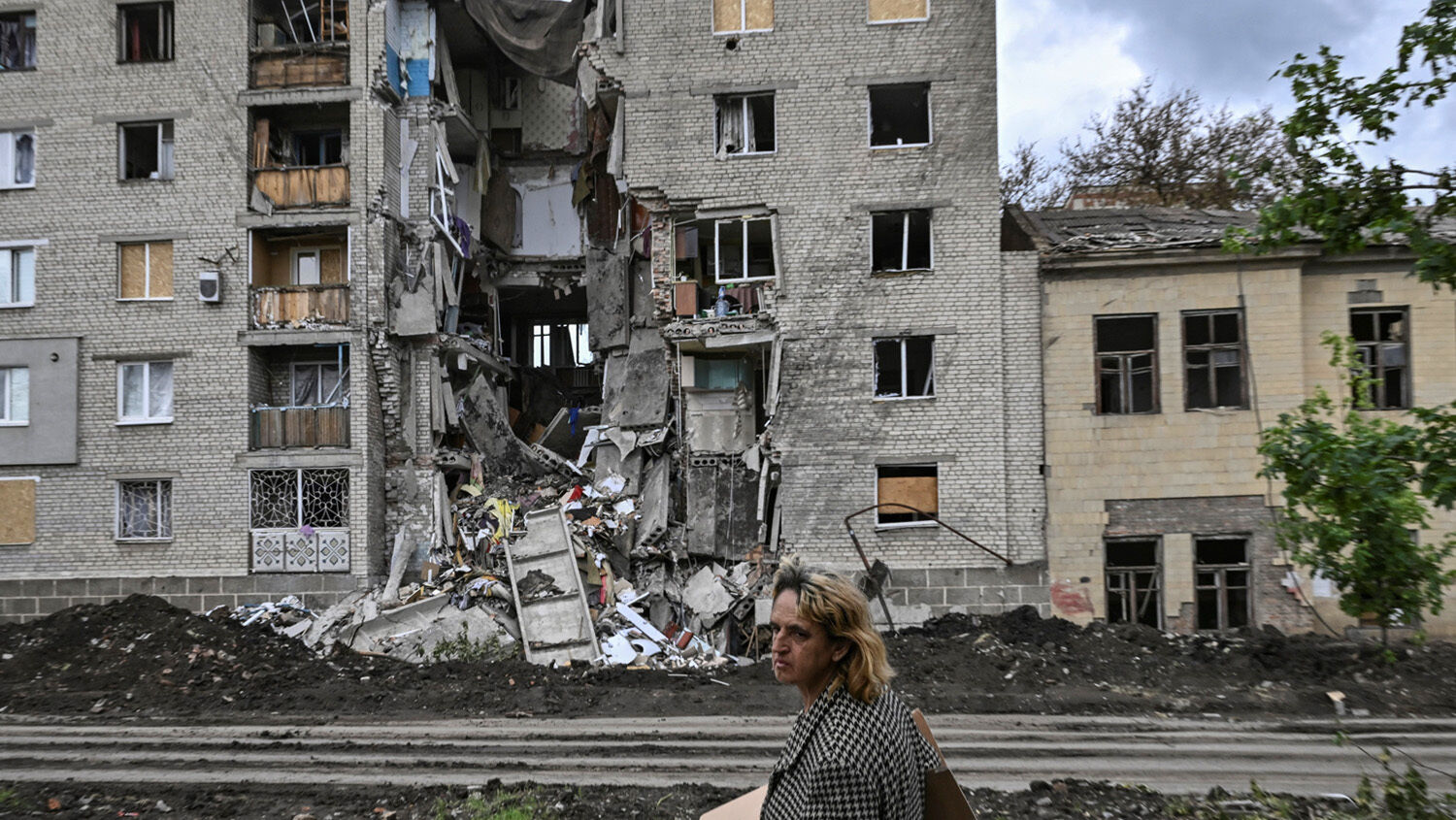 A woman walks by a destroyed apartment building in Bakhmut in the eastern Ukranian region of Donbas on May 22 during the Russian invasion of Ukraine.
ARIS MESSINIS/AFP via Getty Images

Russia revives the concept of holy war in Europe.

“Ukraine is not just a neighboring country for us. It is an inalienable part of our history, culture and spiritual space,” Russian President Vladimir Putin said on February 21. Patriarch Kirill of the Russian Orthodox Church also emphasized the spiritual aspect of the war over Ukraine. In a March 6 sermon, he described the invasion as a war “against evil” and a “religious cleansing operation.” Putin, Kirill and many Russians want to halt the eastern advance of the irreligious West and reunite the two countries and their churches. Subjecting a people under a religious authority through military means is conversion by the sword, or a “holy” war.

Kirill hasn’t shied away from approving military force; he even blessed Russia’s nuclear weapons. Putin has said for decades that he has a “deep Christian faith.” But prior to 2012, he had avoided overt displays of it. That changed when that year’s election returned him to power and mostly liberal Russians protested. Putin began to promote the Russian Orthodox Church, and the church began to promote Putin’s ambitions as holy causes. When Russia took Ukraine’s Crimean Peninsula in 2014, Patriarch Kirill stated, “In principle, Ukraine does not independently exist.” It is instead part of “the historical territory of Russia.” Putin justified the annexation by calling the peninsula “sacred” ground for Russians. Those who disagreed faced prison sentences. In Crimea, once part of the Roman Empire, Vladimir the Great was converted in a.d. 988 and consequently subjected Ukraine to the “Christian” faith.

In Eastern Europe and Russia, religion revived dramatically after the fall of the Soviet Empire. Nearly 70 percent of Russians and Ukrainians today believe in the Orthodoxy and thus in the conversion of Vladimir the Great.

Kirill said in his March 6 sermon that the West this year had been engaging in “the suppression and extermination of people in the Donbas.” He claimed that the people of the Donbas refused to hold gay pride parades, and for that reason, Western powers sought to destroy them. “Today there is a test for the loyalty to this new world order, a kind of pass to that ‘happy’ world, the world of excess consumption, the world of false ‘freedom,” he said. “Do you know what this test is? The test is very simple and at the same time terrible—it is the gay pride parade.”

“You may be wondering what lgbt rights have to do with the bloody war in Ukraine,” the Washington Post wrote. “But Kirill has long framed Russian geopolitical challenges in these terms, as the conflict between a conservative, culturally virtuous Russia and a debauched, immoral West.”

Foreign Policy wrote, “In many ways, Putin’s invasion of Ukraine has become a holy war for Russia.” The Economist headlined: “Russia’s Orthodox Church Paints the Conflict in Ukraine as a Holy War.”

Whether Putin or any other Russian Orthodox member or leader is a true believer or has baser motivations, even a basic understanding of the Bible makes it impossible to deny an assessment that the West is debauched and immoral. Many believe that sexual appetites, not unlike those of Sodom and Gomorrah, are destroying society. And the cleansing of secularism and its debaucheries has motivated nation after nation to take up the sword. Is Russia the new crusader for Christian values? If you ask many Russians, the answer is yes.

Religious historian Diana Butler Bass explained: “The world is witnessing a new version of an old tale—the quest to re-create an imperial Christian state, a neo-medieval ‘Holy Roman Empire’—uniting political, economic and spiritual power into an entity to control the earthly and heavenly destiny of European peoples.”

In conversation with Kirill, Pope Francis disapproved of the term “holy wars.” While acknowledging that both churches have used the terminology in the past, “today we can’t talk this way,” he said, according to the Vatican press office. Condemning the use of brutal force, he recommended leaving out the word “holy.”

The Holy Roman Empire, a historic union between church and state, has been responsible for wars, inquisitions and crusades. Under this empire, Protestants were martyred, Muslims brutally butchered, and Jews exterminated. “From the birth of popery … it is estimated by careful and credible historians that more than 50 millions of the human family have been slaughtered for the crime of heresy by popish persecutors,” author John Dowling wrote in The History of Romanism.

“That empire has had a history of converting people to Catholicism with the sword for about 1,500 years,” Trumpet editor in chief Gerald Flurry wrote in the October 2007 Philadelphia Trumpet. Modern European nations certainly have the military power to wage far more devastating conquests in the name of religion, but so far they haven’t had a crusader king and crusader pope to call on them. But the recent developments in Russia show how even countries that have drifted toward secularism and atheism can have a dramatic and catastrophic turnaround toward religious fanaticism.

In Russia’s glory days, Moscow was considered the Third Rome, while Kyiv was called the “New Jerusalem.” No surprise that Putin gets much support for his conquest to regain Russia’s spiritual origin.

The Catholic Church, for its part, has never successfully gained full control of the “old” Jerusalem for a significant amount of time. “The Vatican considers Jerusalem to be its most holy place on Earth—the ‘center of the universe,’ Mr. Flurry wrote in “The Last Crusade.” In various crusades the Catholic Church has tried to rule the city—but all attempts failed. Yet a prophecy in Daniel 11 indicates that the Catholic Church will seek to regain Jerusalem.

Verse 40 warns of an end-time clash between the king of the north (a Catholic European empire) and the king of the south (radical Islam, led by Iran). Following the clash, the king of the north will move its headquarters to Jerusalem. “And he shall plant the tabernacles of his palace between the seas in the glorious holy mountain …” (verse 45). But then Bible prophecy warns that “there shall be a time of trouble, such as never was since there was a nation even to that same time …” (Daniel 12:1). Mr. Flurry wrote, “There should be no chapter break between Daniel 11 and 12. The story flow continues, illustrating that this religious war will trigger a nuclear World War iii.”

Far from being over—religious wars are about to bring the greatest catastrophe in mankind’s history! While these religions claim to fight in God’s name, God Himself will have to put an end their fighting to bring true peace (Matthew 24). These trends and the wonderful hope that follows is thoroughly explained in Mr. Flurry’s free book The Eternal Has Chosen Jerusalem.