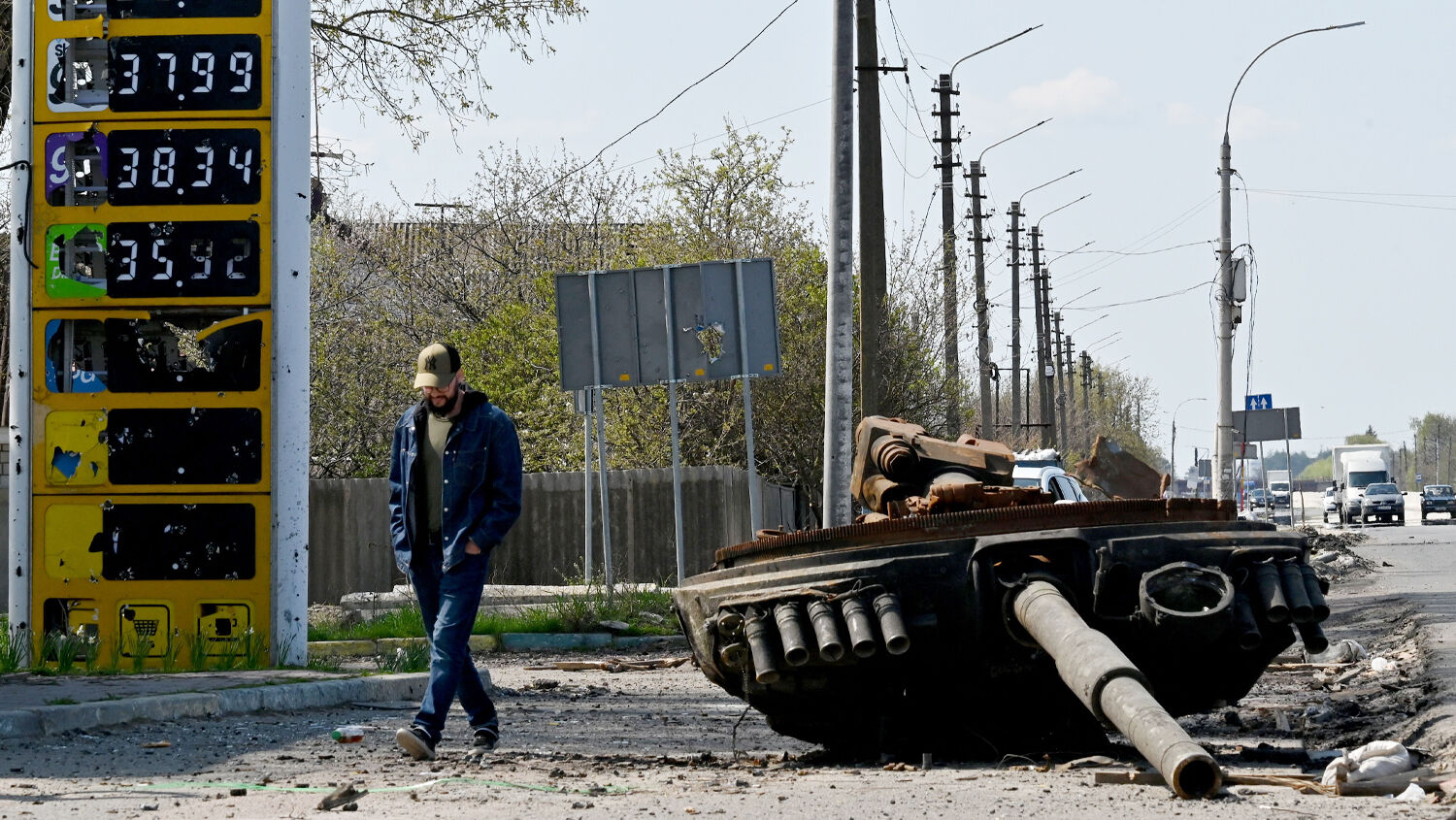 A Ukrainian serviceman walks past the turret of a Russian tank next to a destroyed petrol station in the village of Skybyn, northeast of Kyiv.
SERGEI SUPINSKY/AFP via Getty Images

In his 1989 essay “The End of History?”, United States State Department official Francis Fukuyama suggested that mankind was seeing not just the conclusion of the Cold War, but the triumph of Western liberal democracy as “the final form of human government.”

“What we may be witnessing,” Fukuyama wrote, “is not just the end of the Cold War, or the passing of a particular period of postwar history, but the end of history as such.”

History, as he defined it, was the protracted struggle between freedom and oppression. And with the decisive victory of American liberalism and freedom over the forces of Soviet totalitarianism, history had come to an end. He argued that though events would continue to happen, humanity’s political evolution had reached its pinnacle. The sun had set on authoritarianism. The era of great powers warring against each other had ended, and liberal democracy, individual freedom and popular sovereignty would continue to spread.

Francis Fukuyama was not alone in this optimistic forecast. U.S. President George H. W. Bush was among the leaders who shared in his vision. Bush’s 1990 address to Congress hailed a future “free from the threat of terror, stronger in the pursuit of justice, and more secure in the quest for peace.” Mankind was entering a “new world,” he said, “quite different from the one we have known, a world where the rule of law supplants the rule of the jungle.”

The “end of history” was an exhilarating hypothesis for Westerners. It became an instant sensation among policymakers and pundits. As the 1990s continued, the evidence supporting it mounted: The newly independent Baltic nations cast off all legacy of the Soviet Union and cleaved to the West; all of Eastern Europe’s former Communist regimes were replaced by democratically elected governments; in East and Southeast Asia, capitalist development shifted political might in favor of West-looking classes; soon, even Russia made radical reforms, adopting capitalism and holding real elections—sure it was “gangster capitalism,” but give the Russian people time. There was even talk from Russia about possibly joining nato.

The West was elated. We had won. It was the end of history.

But then some “history” happened.

The 9/11 terrorist attacks were a bolt from the blue. The West was profoundly jolted. But the optimists remained mostly undeterred. In an Oct. 5, 2001, Wall Street Journal opinion piece, Fukuyama reminded readers of the nuance of his thesis and wrote: “I believe that in the end I remain right.”

These were alarming developments that looked disturbingly like “history” was still happening.

Yet even then, many Westerners viewed them as mostly isolated incidents. After all, the parts of Georgia and Ukraine that Putin took were peopled mainly by individuals who didn’t seem to mind being returned to Russia. Surely Putin would stop there and that would be the end of it. With enough of this sort of wishful thinking, the optimists maintained that real history—the great struggles and major wars that have epitomized mankind for millenniums—was still basically over. Despite some hiccups, time is on the side of freedom. Economic interdependence of the great nations is too strong to allow war. And the spread and supremacy of liberal democracy is still inevitable.

Then came February 24 of this year.

As Putin’s tanks transgressed Ukraine’s border that morning, rolling toward Kyiv, anything remaining of the dream that man had reached the end of history was flattened beneath their tracks. Any glimmer of hope that Russia and its partners would eventually integrate into the U.S.-led, liberal democratic order was crushed. The ugly reality could no longer be denied because this was not just a war between the armies of Russia and Ukraine—but a war between two worldviews.

Ukraine’s people, for the most part, lean Westward. They elected the Jewish Volodymyr Zelenskyy as their leader in 2019. And their worldview is aligned with that of the United States. They believe the will of the people should determine a nation’s path and that the Western model functions better for more people than any other. They’ve long sought to join nato and the European Union, which would make Ukraine a treaty ally to America (and dozens of other democracies). They believe that as an independent nation, they have the sovereign right to try to join these or any other groups they wish.

Russia, on the other hand, rejects the very idea of liberal democracy as a sustainable model. Vladimir Putin has led the nation for the last 22 years as a ruthless authoritarian, with the hearty support of the bulk of his people. And if his worldview wasn’t clear enough after the invasions of Georgia and Ukraine’s Crimea, he laid it totally bare in 2019, declaring: “Liberalism is obsolete.” Instead of leading Russia in a more democratic path, the way the “end of history” thesis forecast, Putin has steered it in the opposite direction. And tens of thousands of his soldiers are now at work in Ukraine—the flashpoint between worldviews—where they are committing unspeakable atrocities in an effort to bring about a new global order.

And Putin’s Russia is not alone. China, India, Iran, South Africa, Belarus, Cuba, Nicaragua, Venezuela and Kyrgyzstan are among the nations directly or indirectly supporting Russia’s illegal war—and thereby throwing their weight behind a return of “history.”

Two of the largest, most populous, most powerful nations in the world are supporting Putin!

Even those who are closely watching the war in Ukraine fail to understand its importance and the importance of Eastern nations’ reactions. https://t.co/jfYun5Jfb4

Meanwhile, Russia’s war has catalyzed moves by Germany and Japan to reverse decades of military hesitancy and double their defense budgets as they prepare for a return to great power war.

This all adds up to show that history—tangled, unjust, retrograde, sordid, violent and ugly history—has not ended. And analysts are being forced to acknowledge that a dramatic new chapter is just beginning, with implications far beyond Ukraine’s borders.

“We are all living in Vladimir Putin’s world now,” international politics expert Ivan Krastev wrote on February 27, describing it as a world in which brute force crushes democratic rights and rule of law. To complete the picture, he quoted the ancient Athenian military general and historian Thucydides: “The strong do what they can and the weak suffer what they must.”

Even Francis Fukuyama himself has admitted that this year’s war may well mark the end of “the end of history.” He told the New Statesman that his “ultimate nightmare” is a world in which China and Russia work together, supporting each other’s expansionism and totalitarianism. “[T]hen you would really be living in a world that was being dominated by these nondemocratic powers,” he said. “If the United States and the rest of the West couldn’t stop that from happening, then that really is the end of the end of history.”

No one is preventing profound Russo-Chinese cooperation and expansionism today. So it turns out that history did not end in 1989.

A great many were seduced by the euphoria of “end of history” sanguinity, but readers of the Bible never should have been taken in by it. Numerous passages of Scripture forecast a third world war—a great power war—that will soon be fought largely under the leadership of totalitarian strongmen in Russia, China and Europe, who will use vast arsenals of nuclear weapons. “[T]here will be greater anguish than at any time since the world began. And it will never be so great again. In fact, unless that time of calamity is shortened, not a single person will survive,” Matthew 24:21-22 state (New Living Translation).

This conflict will annihilate any remaining vestiges of liberal democracy and make all of mankind’s previous wars look like playground skirmishes. It will be by far the bloodiest chapter in mankind’s history, and in the lead-up to it, major historic events such as Russia’s barbaric invasion of Ukraine should not catch us unawares.

History has not ended. The Scriptures make clear that whether or not Russia wins the current round in its push against the liberal order, a historic new chapter is beginning that will lead into an era of unprecedented global calamity and suffering. These will be the bloodiest pages in mankind’s strife-ridden history. To many on the scene at this time, the violence and suffering will appear to be humanity’s final chapter. But the Bible makes plain that it is actually only the last page of the prologue of mankind’s exciting future.

Just after Matthew 24:21-22 say that the approaching global war will be so devastating that it could kill all human life, it then adds a key detail: “But it will be shortened …” (nlt).

Nuclear World War iii will be interrupted by the return of Jesus Christ! He will crush the violence before mankind has wiped himself out. He will establish the true “final form” of government over man, the same one that was offered to us in the Garden of Eden—and then use it to force upon the Russians, Chinese, Europeans, Indians, Japanese, Americans and all people the peace that has always eluded mankind. At that time, chapter one of real history can finally begin.