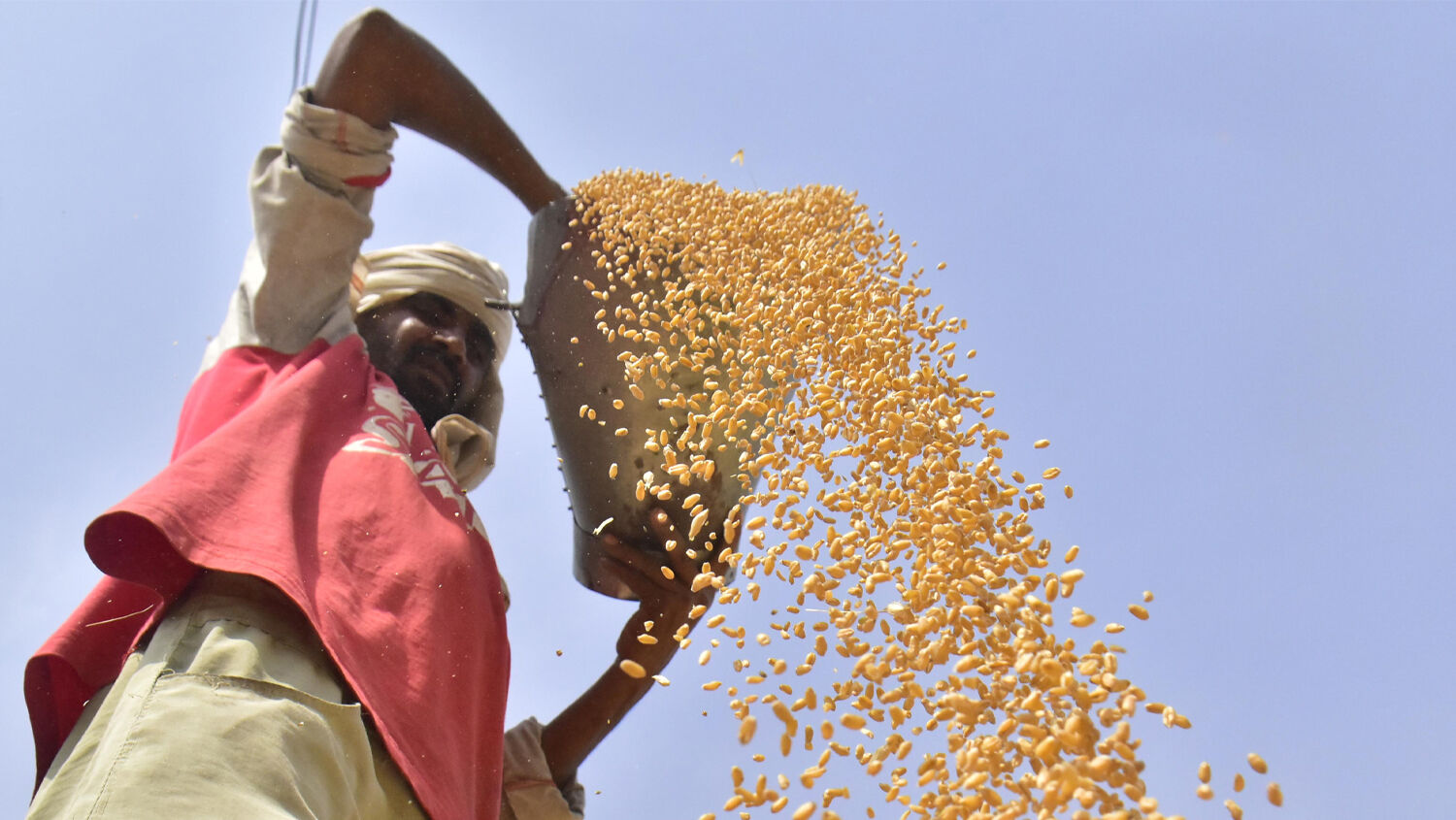 Our food supply lines are more vulnerable than many realize.

India, the world’s second-largest wheat producer, banned wheat exports on May 14. It did not have a shortage; India harvested 7.7 million tons of wheat last year. But inflation and high food prices are causing important problems. The Indian rupee has experienced the highest inflation in eight years. India has a population of almost 1.4 billion and has about 86 million people living in poverty. Wheat is probably the last commodity India can afford to become unaffordable. To stop food prices from spiraling even more out of control, New Delhi put in the export ban, with limited exceptions.

This is rocking export markets. Futures at the Chicago Mercantile Exchange, a major agricultural derivatives marketplace (similar to a stock exchange), rose almost 6 percent to $12.47 a bushel. This is wheat’s highest level in two months.

All of this is compounded with the effects of Russia’s invasion of Ukraine. Both Russia and Ukraine are major wheat exporters. Ukraine has closed its Black Sea ports to export until Russia’s invasion ends. This has caused the prices of wheat and corn to skyrocket; wheat prices have risen over 60 percent since the start of the year. Many were hoping India would alleviate the crisis by exporting more grain. This apparently isn’t going to happen.

The Indian government has, however, stated the measures are temporary.

India is also under an intense heat wave. Delhi is facing temperatures as high as 120 degrees Fahrenheit. Much of the heat wave is impacting India’s wheat belt. Many hope India’s annual monsoons will provide relief—but the storms could be weeks away.

India isn’t the only country having issues with wheat production. So is the world’s largest wheat producer: China.

China is struggling with the effects of its own weather problems. Flooding last year left some of China’s wheat fields waterlogged. This made it harder for wheat to take root. On top of that, the covid-19 lockdown has delayed the delivery of fertilizers. Harvest time for wheat hasn’t arrived yet, but many are nervous with how this year’s harvest season in China will go. “Right now, it seems that the harvest is definitely affected,” Ren Ruixia, a Chinese farmhand, told the New York Times. “But it also depends on the weather next month—how much rain we have.”

There are other signs that China’s wheat production is struggling. Last month, Beijing suspended sales from its wheat reserves. In weekly auctions earlier this year, the Chinese government has released only about 551,155 tons, as opposed to the 4.4 million tons it sometimes auctioned last year.

Part of the reason for this is the shortage of corn. Chinese ranchers often use corn as cattle feed. But new corn won’t be available until autumn. So cattle farmers have had to substitute by buying immature wheat to feed their cattle. Buying wheat is more expensive than corn.

On the other side of the world, the United States is also experiencing wheat shortages. According to a May 12 report from the U.S. Department of Agriculture: “U.S. 2022–2023 wheat supplies are projected down 3 percent …. The first survey-based forecast for 2022–23 winter wheat production is down 8 percent from last year.”

Then there is the effect of La Niña, a phenomenon that occurs when colder-than-normal water in the Pacific Ocean alters jet streams (currents) in the air, disrupting weather conditions worldwide. La Niña is known to cause drought in breadbaskets like America’s prairies. Two La Niña events have already taken place this year. Some authorities estimate there will be a third one. Having a “triple dip” La Niña event in a year is very rare.

Argentina has been struggling with its wheat stocks because of La Niña. In the 2021–2022 season, Argentina produced a record 22.1 million tons worth of wheat. Argentina’s Rosario Grains Exchange predicts the 2022–2023 season will produce about 19 million tons.

Global circumstances are so worrisome that Andrew Bailey, governor of the Bank of England, foresees a massive food price crisis hitting the world. “That is a major worry,” he told members of Parliament with the Treasury Select Committee. “It is not just a major worry for [Britain], it is a major worry for the developing world.” Bailey said food price rises could be “apocalyptic” and he has “run out of horsemen” when counting Britain’s economic shocks.

Rothamsted Research, a British agricultural research institution, estimates that over 3 billion people depend on wheat for nourishment worldwide. A disruption in the wheat trade wouldn’t be an ordinary economic shakeup—it could have catastrophic consequences for billions. If wheat were to suddenly become unaffordable for countries to buy, the losses would be in human lives.

We wrote in the latest Trumpet issue that Russia’s war in Ukraine is “threatening the global food supply” with its effect on wheat exports. The Ukraine war is a major cause of the uncertainty in the wheat market, but it’s not the only one. When China and India, the world’s biggest and second-biggest wheat producers, have to slash exports just to supply their own people, it means circumstances are starting to get serious.

Is mass famine on the horizon?

The Bank of England’s governor referenced “running out of horsemen.” This was an allusion to the biblical book of Revelation. Chapter 6 introduces the famous “four horsemen of the apocalypse” (verses 1-8). These are prophetic symbols of mass cataclysm just before the Second Coming of Christ. The first horse is white; the second, red; the third, black; the fourth, “pale,” or green (see Strong’s Concordance).

Notice especially the “black horse”: “he that sat on him had a pair of balances in his hand. And I heard a voice … say, A measure of wheat for a penny, and three measures of barley for a penny; and see thou hurt not the oil and the wine” (verses 5-6).

A “penny” in this case refers to the denarius, the day’s wage for a laborer (see Matthew 20:2). The Archaeological Study Bible says the following about verse 6: “One measure of wheat would have been enough for only one person, while three measures of the less nutritious barley would have been barely enough for a small family. Famine had inflated prices to at least 10 times their normal level.”

This “black horse” represents famine and the resulting economic crisis.

“[A] great famine,” we write in The Four Horsemen of the Apocalypse, “like none before it or ever again, will strike this Earth with frightening force and fury. This time, instead of only affecting war-torn regions or the Third World, it will affect the First World nations …. [T]his calamity will reduce the wealthy nations to the same level as the poorest.”

We’re seeing the initial phases of this famine already.

A worldwide catastrophe of famine is not pleasant to think about. Major wheat-producing countries’ falling production may be disconcerting. But the same Bible that prophesies of the “black horse” also prophesies of hope. The Bible states that curses like famine are a result of man’s sins (see Leviticus 26:14-15, 26; Deuteronomy 28:15, 24, 42). “The future appears very bleak. But there is a way of escape (Revelation 12:13-17),” we write. “God will hear and forgive anyone who repents. The only ones promised divine protection are those few who have yielded to God and His way of life.”

God promises protection to anybody who turns to Him. God even allows disasters like famine because He wants people to turn to Him. And worldwide events like the “black horse” will eventually bring the world to getting to know their Maker. That’s the hope in these events.

To learn more, please request a free copy of The Four Horsemen of the Apocalypse.