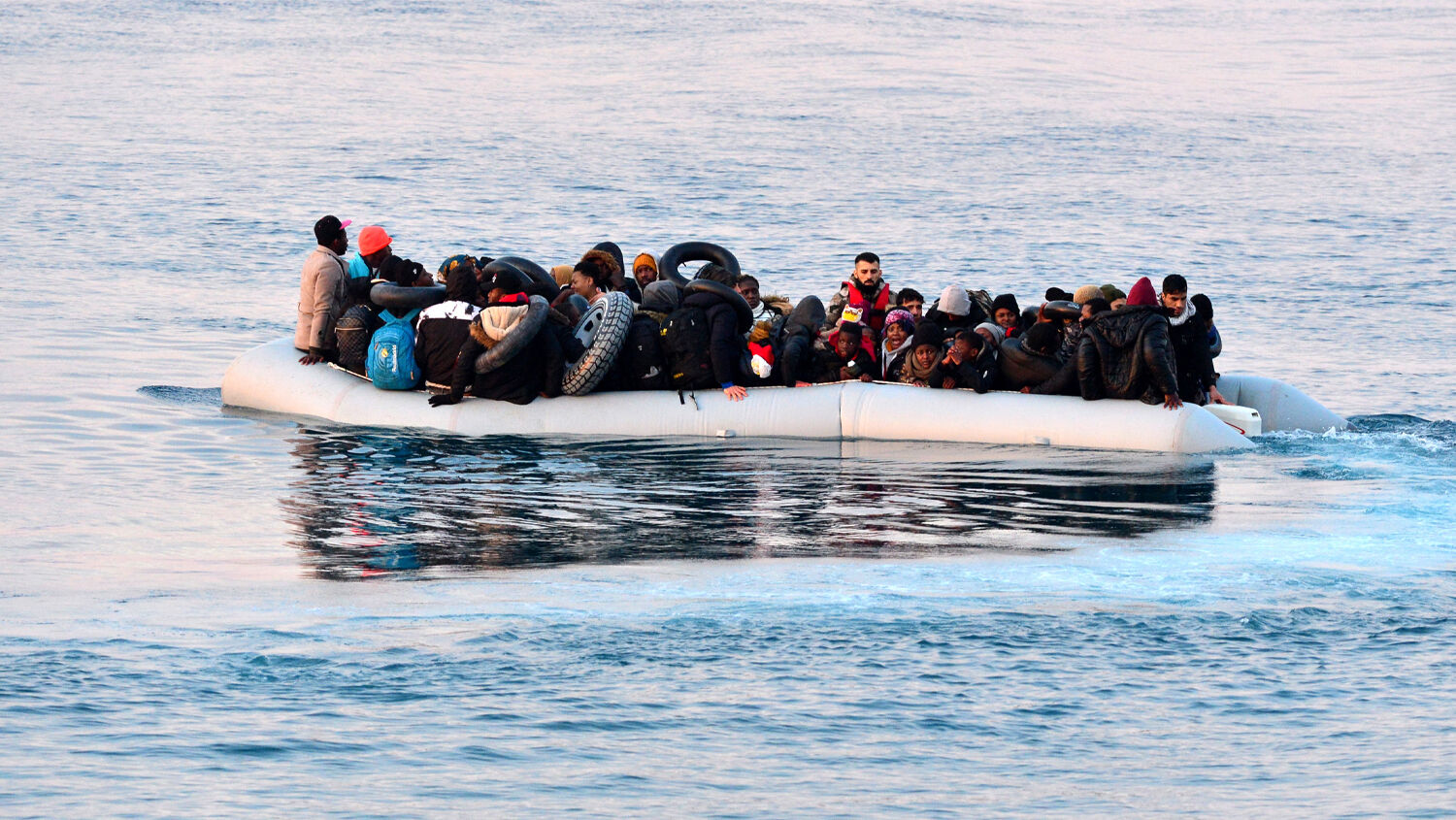 A group of irregular migrants, who were attempting to cross to Greeceâs Lesbos island, are rescued by coast guards.
Burak Akay/Anadolu Agency via Getty Images

Is it just to save face? Or is there more to the story?

For the past two years, the Greek government has been implicated in violently pushing refugees and other migrants outside European Union borders. These pushbacks often involve abandoning migrants at sea in inflatable rafts. (The Trumpet covered this in an article about two months ago.) On April 28, Spiegel Online released the results of an investigation suggesting a new angle. New evidence has surfaced implicating Frontex, the EU’s border control agency, in covering up these pushbacks.

Combining migrant testimony with records from Frontex, Spiegel claims “German Federal Police officers in the Frontex missions are also involved in the pushbacks. Frontex officials find the boats and then leave it to the Greeks to conduct the pushbacks.”

Spiegel cites one particular incident where a raft of migrants was spotted by a helicopter before being apprehended by the Greek Coast Guard and then dragged out to the Aegean Sea. The Joint Operations Reporting Application (jora) is Frontex’s database for recording incidents at EU external borders. Spiegel obtained the record for the incident, which states a German helicopter on behalf of Frontex spotted the group in Turkish waters. The Germans reported this to the Greeks, who reported it to the Turks, the entry claims. The Turkish authorities then supposedly stopped the group within Turkish borders. But one of the migrants’ cellphone video footage shows that they were in Greek territory when they were caught.

The migrants are entering the country illegally and are often from places far away from Europe. Many aren’t fleeing war, persecution or some other serious and imminent threat, so it isn’t too surprising that Europe’s authorities aren’t welcoming them with open arms.

But as the Trumpet previously covered, the Greek authorities often take their pushbacks one step further. There is evidence the Greeks often attempt murder by throwing the migrants overboard. For an EU-wide agency to be assisting the Greek officials and covering for them is suspicious.

The research shows that Frontex was involved in the illegal pushbacks of at least 957 refugees between March 2020 and September 2021. In 22 of these cases, the availability of open-source intelligence like photos of the refugees in Greek life rafts, made it possible to define them as pushbacks without any doubt. The true number of pushbacks conducted with Frontex assistance is likely even higher.

Spiegel reported that the pushbacks are listed in jora but under the term “prevention of departure,” meaning the migrants were found before they entered the EU and were unable to leave their country of departure. This has been proved false. This means Frontex is putting false information into its databases. This means Frontex knows what is going on and is trying to cover it up.

Three anonymous officials, two from Frontex and one from the Greek Coast Guard, confirmed to Spiegel Frontex’s whitewashing.

Frontex executive director Fabrice Leggeri, in office since 2015, has never admitted to the pushbacks. However, on April 28, the same day Spiegel released its report, Leggeri announced his resignation. His official reason for resigning was a supposed changing of Frontex’s duties from Brussels. But the following day, a European Commission spokesperson denied Leggeri’s claims. Leggeri, as well as two other Frontex employees (one of whom may have also resigned), are both under investigation for rights violations of asylum seekers.

This is all the more hypocritical when you consider Europe’s response when United States President Donald Trump called to build a wall on the U.S.-Mexican border. Federica Mogherini, the EU’s top diplomat, chided Trump, saying, “We have a history and a tradition that we celebrate when walls are brought down and bridges are built.” A 2017 Pew report showed the proposed border wall as the least popular of Trump’s policies in Italy, Spain, the United Kingdom, Poland and Sweden. In 2015, German Chancellor Angela Merkel famously opened the floodgates for over a million Syrian refugees to enter Germany.

The European Coal and Steel Community, precursor to the EU, was founded in 1952—less than a decade after World War ii ended. One of the motivations for integration was to help Europe move on from the horrors of the war and Nazism. Yet we are again starting to see a Europe-wide police force helping eliminate people it doesn’t like.

Frontex’s mission, as stated on its website, is: “Together with the member states, we ensure safe and well-functioning external borders providing security.” Frontex states that one of its values is to “serve the interests of citizens because we care about people and believe in European values.” “Providing security” and “European values” apparently allow for tossing people into the sea to drown.

Many assume phrases like “European values” stand for principles like democracy, tolerance and personal freedom. Yet Europe has historically embraced values contrary to these. The same Europe that claims to champion liberty and justice used to embrace institutions like the Gestapo, the Inquisition and the Praetorian Guard.

Frontex’s current activities reveal that modern Europe is not the bastion of liberal human rights it claims to be.

Today, it’s a migrant crossing the Aegean. Who will it be tomorrow? Now that the precedent is broken, when more crises strike the Continent, will other groups be targeted?

Much of Europe’s modern heritage dates back to the Roman Empire. And the Bible has a lot to say about Rome and its legacy. Revelation 13 is a pivotal chapter. Verses 1-2 state: “And I stood upon the sand of the sea, and saw a beast rise up out of the sea, having seven heads and ten horns, and upon his horns ten crowns, and upon his heads the name of blasphemy. And the beast which I saw was like unto a leopard, and his feet were as the feet of a bear, and his mouth as the mouth of a lion ….”

A “beast” is a biblical symbol for an empire. The Apostle John wrote Revelation around the year a.d. 90, near the height of the Roman Empire. Putting Revelation 13 with other passages like Daniel 7 makes the identity of this beast clear: Rome. (Please request a free copy of Who or What Is the Prophetic Beast? for more information.)

Revelation 13:7 reads: “And it was given unto him to make war with the saints, and to overcome them: and power was given him over all kindreds, and tongues, and nations.” Rome was notorious for its persecution of Christians anciently. But this isn’t just a prophecy about ancient history.

Revelation 19 shows that this “beast” is on the scene at the Second Coming of Jesus Christ, a yet-future event. Revelation 13:1 specifies that this beast has 10 horns, representing 10 successive governments built on the heritage of Rome (see Daniel 7:23-27).

Nine of these governments have come and gone, the last of them being Adolf Hitler’s Third Reich. That means there is one more left to come.

Herbert W. Armstrong, editor in chief of our predecessor magazine, the Plain Truth, wrote that this final horn “will be … the revival of the beast, the Roman Empire, ‘out of the bottomless pit’ [Revelation 17:8] by a ‘United States of Europe,’ or federation of 10 European nations centered within the bounds of the old Roman Empire (Revelation 17:12-18). This is actually beginning today!”

We’re seeing the seeds of this last “horn” surfacing from the Aegean Sea.

To learn more, please request Mr. Armstrong’s free booklet Who or What Is the Prophetic Beast?