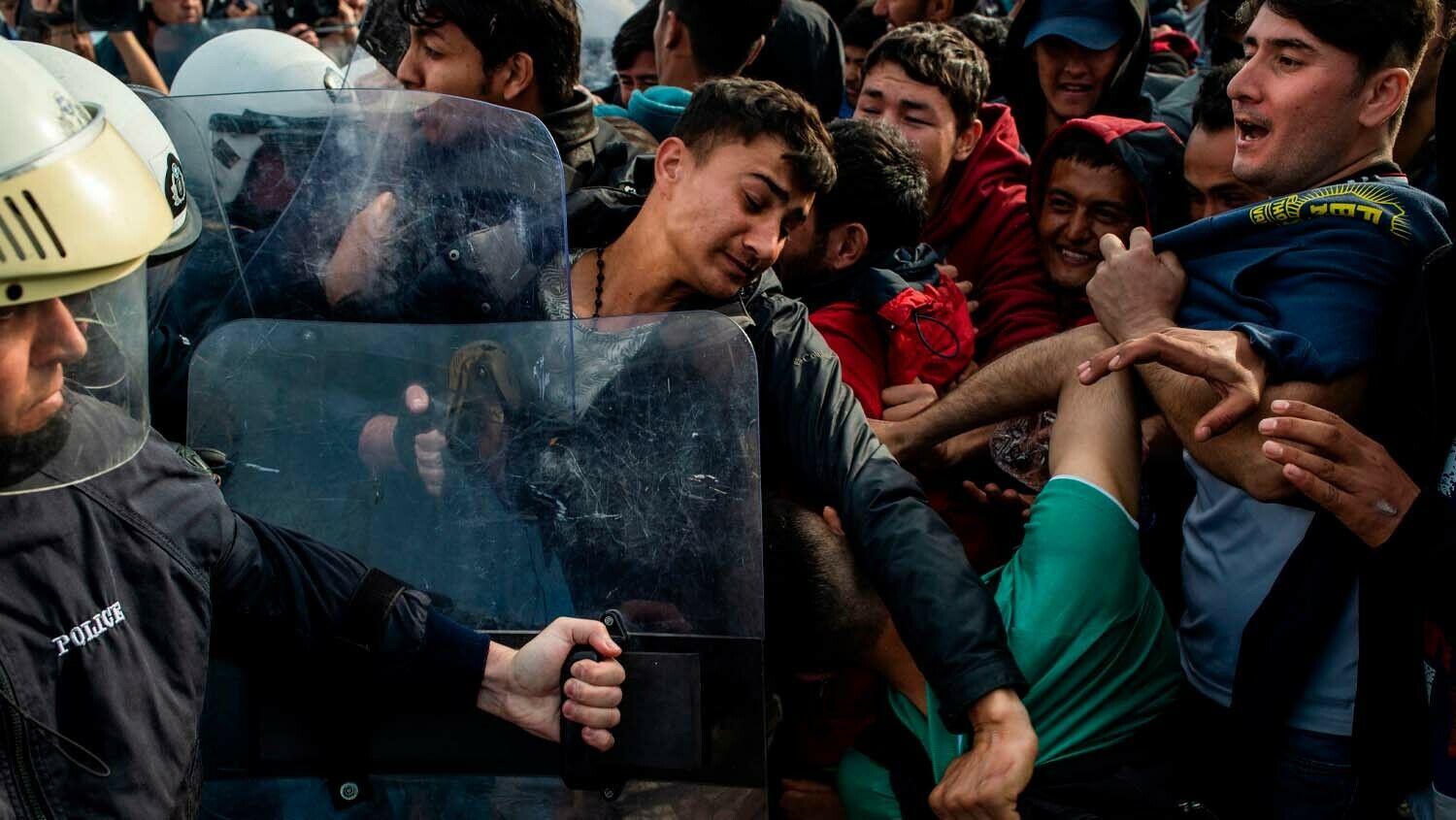 Migrants and refugees scuffle with riot police on the Greek Aegean island of Lesbos, on March 3, 2020, amid a migration surge from neighboring Turkey after it opened its borders to thousands of refugees trying to reach Europe.
ANGELOS TZORTZINIS/AFP via Getty Images

A submerged beast is rising from the Aegean Sea.

A new Spiegel International investigative report presents evidence Greek authorities are murdering migrants. This hasn’t been concretely proved. But the evidence is compelling.

Sidy Keita escaped from the Ivory Coast after demonstrating against the government. Didier Martial Kounamou was traveling from Cameroon to join his brother in France. Both were planning to apply for asylum in Europe. They found themselves among a group of 36 migrants crossing the Aegean Sea from Turkey to Greece. They made it to the Greek island of Samos on Sept. 15, 2021.

“A few days after their arrival on Samos,” the Spiegel report reads, Keita and Kouamou were found dead. Following an examination of Keita’s body, authorities determined that he had drowned.”

The Greek authorities are not known for the kindest treatment of migrants in Europe. Since 2020, the Coast Guard has been sending caught migrants back to sea, abandoned on rafts. In other words, they are captured and then left for dead. Spiegel calls this the new “normal in the Aegean.” But the case of the two dead Africans suggests that the Greek authorities are doing more than just leaving people for dead.

“The reporting strongly suggests that Greek border officials pulled Keita and Kouamou out to sea and then threw them overboard,” Spiegel wrote.

When the group of migrants reached Samos, a Coast Guard vessel began zeroing in on them from the sea. Photos the migrants took confirm this. Officials from land were also coming to meet them. Some of them were wearing balaclavas.

One of the migrants contacted Aegean Boat Report, a nongovernmental organization assisting asylum seekers. In one message sent to the organization, one migrant whispered in a frightened tone, “The soldiers are looking for us.”

European Union law requires that migrants like the group at Samos be registered at refugee camps. The Human Rights Legal Project also heard of the group’s case and sent e-mails to the Greek government, the United Nations Refugee Agency and the European Commission. They asked that the migrants be taken to a camp. Nobody replied to them.

The border guards took the migrants onboard a ship. Pascaline Chouake from Cameroon was one of the migrants. She told Spiegel that “the border guards … took them onto a Coast Guard ship. Once on the boat, she says, the men beat the refugees and took away their mobile phones and valuables.” Other migrants corroborated the account. Meanwhile, Keita, Kouamou and another Cameroonian under the alias Ibrahim escaped the guards.

The Coast Guard then sailed toward Turkey, put them on two rafts, and abandoned them. The Turkish Coast Guard later rescued them and brought them to Turkey. “If what the survivors say is true,” Spiegel wrote, “it would mean that people were deliberately placed in a life-threatening situation by Greek security personnel.” As shocking as this may be, this is nothing new.

But what about Keita and Kouamou?

Ibrahim said the escapees hid in the forest in Samos. After sleeping in the woods, the trio emerged from their hiding place to be immediately apprehended by plainclothes officers. Ibrahim stated that men wearing balaclavas “beat them and bundled them into a car before then taking them out to sea on a speedboat.”

After 30 minutes of sailing, the motor stopped. The Greek authorities then threw Kouamou and Keita into the water. “I resisted,” said Ibrahim. “They beat me properly before throwing me into the water.”

Kouamou was the first to drown. Ibrahim was a strong swimmer and made it to the Turkish coast, dragging Keita with him. Ibrahim tried to revive Keita, but it was in vain. Not long after, Ibrahim met the Turkish border guards. They apparently treated him much better.

The only witness we have at the moment is Ibrahim. Can his account be trusted?

There is no independent proof for Ibrahim’s accusations, but his account is credible. Ibrahim’s description of the Turkish coastal region is consistent with satellite photos and his description of the waves match that day’s weather report. That he is a strong swimmer isn’t surprising, since he once served in the Cameroon Navy. And he was able to identify the Greek speedboat from photos—a model built by Rafnar. The Greek Coast Guard verifiably has such a boat stationed on Samos.

The Greek police and Coast Guard deny everything. They claim everything mentioned in the report “has nothing to do with reality.” But Spiegel spoke with two anonymous Greek officials who confirmed that border officials do throw refugees overboard. The Turkish authorities also list 29 pushbacks since May of last year with people allegedly thrown overboard.

And the Spiegel report covers an event that occurred last September. Who knows what has happened since then.

Violent pushbacks against migrants are nothing new for the EU. The Trumpet has covered previous pushbacks in Croatia where border guards were torturing migrants. The Greek authorities seem to have taken circumstances further. If the accounts from migrants are to be believed, the Greeks officials are guilty of murder.

European police systematically murdering migrants sounds like a story about World War ii or the Berlin Wall. Modern Europe is supposed to be sophisticated, tolerant and multicultural. These kinds of horrors were supposed to be for the history books.

But stories like Ibrahim’s show a very different Europe. A Europe whose old ghosts are returning.

The Croatian cases the Trumpet covered occurred near Plitvice Lakes National Park, one of Croatia’s biggest tourist attractions. The Greek cases occurred in the Aegean Islands, the quintessential honeymoon destination. Many tourists go to places like these to relax and enjoy themselves—unaware of the atrocities occurring nearby.

This demonstrates the existence of two different Europes. There’s the Europe of fine culture, of progress, of modernity—the tourists’ Europe. But behind that facade is the Europe of secret police, torture and execution—the Europe of the Gestapo and the Stasi. Slowly but surely, this second Europe is manifesting itself more and more. And these “ghosts of Europe’s past” aren’t restricted to just one country.

Once this Europe manifests itself fully, it will impact the world.

“Europe will unite and it will become a formidable global dynamo,” theTrumpet.com managing editor Brad Macdonald writes in The Holy Roman Empire in Prophecy. “The unity Europe attains will not be perfect; it will not come about easily or peacefully; and it certainly will not endure. But Europe is going to become a united superpower and a serious, daunting global power. The emergence of this new Europe will have far-reaching and dramatic consequences for us all.”

What are these “far-reaching and dramatic consequences”? How Europe’s border guards are treating people like Sidy Keita and Didier Martial Kounamou gives a little glimpse.