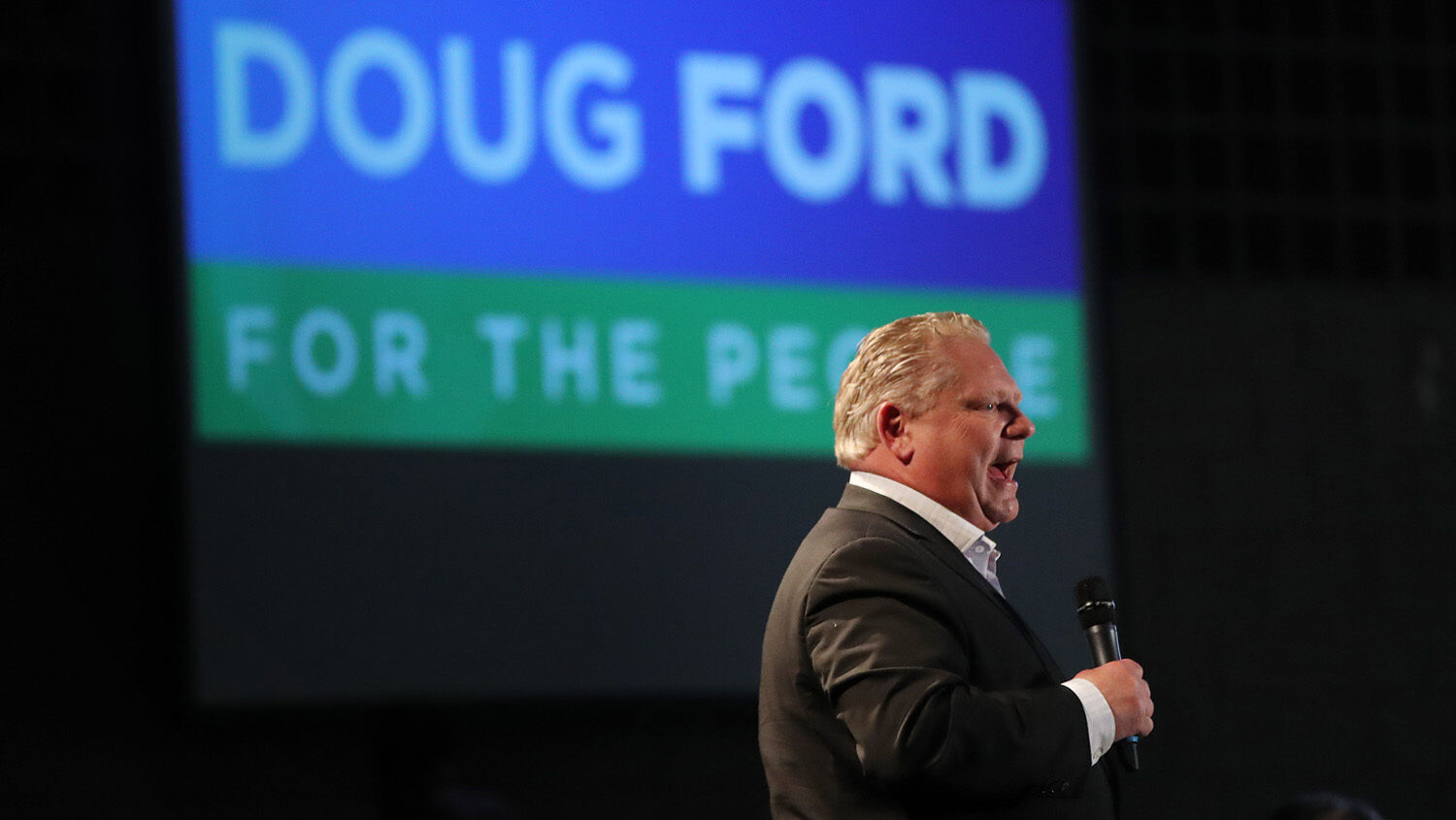 Canada’s most populous province is becoming a Communist state.

By Abraham Blondeau • May 3

The province of Ontario is currently governed by the Progressive Conservative Party of Premier Doug Ford. The Conservatives gained a majority provincial government in 2018 following the extremely radical government of Liberal Premier Kathleen Wynn. Yet based on the laws being passed, it would be difficult to know if a liberal or conservative government were in power.

One bill being considered by the Ontario legislature is Bill 67, Racial Equity in the Education System Act. The bill was authored by New Democrat Party member Laura Mae Lindo but is supported by the Progressive Conservatives. This act would make anti-racism training mandatory for teachers and impose fines on individuals who disrupt school activities with racist language or activities. The purpose of the bill is to enshrine critical race theory into the public school system. The bill defines anti-racism as “the policy of opposing racism including anti-indigenous racism, anti-black racism, anti-Asian racism, anti-Semitism and Islamophobia.” This exclusively singles out British and European heritage as systemically racist.

Commentator Barbara Kay wrote: “The result of Bill 67 will be to divide students by encouraging grievance and resentment in designated victim groups and by compelling guilt in white students. White students will be too nervous to enter any discussion that comes near race or gender or indigenous matters with anything approaching frankness or even curiosity.” Teaching licenses and school funding would be linked to this anti-racism training. Critical race theory has been in Canadian schools for decades, especially in relation to the prioritization of indigenous studies over other historical subjects. This is an open escalation of attacking British heritage in schools and seeks to create division by shaming white kids in the classroom.

What is critical race theory? Christopher Rufo, a fellow at the Manhattan Institute, explained: “Critical race theory is an academic discipline, formulated in the 1990s, built on the intellectual framework of identity-based Marxism. Relegated for many years to universities and obscure academic journals, over the past decade it has increasingly become the default ideology in our public institutions.”

Why are the conservatives of Ontario supporting a bill by the socialist party? Why are they trying to enshrine Marxism into Ontario schools?

In June, Ontario will have a general election, but there is little difference between the conservative, liberal and socialist platforms. They all espouse big spending, big government and invasive policies. All three major parties support lockdowns, vaccine mandates and permanent emergency powers. The Trumpet has been warning about a Communist infiltration into Canadian society and politics. Soon, Ontario will have the “Communist election” where people will democratically select which brand of communism they prefer to rule over them. No matter who they elect, the leaders all have policies that fundamentally undermine the freedoms and traditions of the country. Canada’s most populous province, with approximately 38 percent of the nation’s population, is being drowned by a wave of Communist policies that is eroding civil liberties.

In a February 28 interview, Premier Ford was asked if he had awakened his “inner liberal.” Ford responded by saying his children call him a “bleeding heart liberal” and that he doesn’t like being classified under political stripes, but will do whatever the people need.

This opportunistic thinking was evident during the pandemic. Ontario was consistently the most locked down jurisdiction in North America in 2020 and 2021. Travel was restricted, stay-at-home orders were issued, small businesses were forced to close, and the government operated in a constant state of emergency powers. This was done under the Reopening Ontario Act, which allowed the government to make temporary laws for the pandemic. According to that statute, the recommendations of the chief medical officer, who is an unelected doctor, must be followed and made into law. That essentially means that Ontario has ceased to function as a democracy.

Interestingly, Ontario’s current chief medical officer, Dr. Kieren Moore, who advocated an aggressive vaccine campaign and vaccine passports, has significant ties to Pfizer. Moore serves on Pfizer’s advisory board for the Lyme disease vaccine, which Pfizer is currently developing. Moore’s university, Queen’s University, working with the Public Health Agency of Canada received a $4 million grant over five years to research Lyme disease. Moore has declared this relationship a conflict of interest. Do those ties with Pfizer affect his judgment on public health policy?

It was also during the pandemic that the Ford family business, Deco Labels and Tags, produced covid-19 signage and labels. Doug Ford is a partial owner. The Ontario government made it mandatory for businesses to have covid signage. Deco Labels was also included on the list of essential businesses that could stay open during the strict lockdown measures. Ford’s net worth jumped from $3 million in 2019 to an estimated $50 million in 2022. Did that conflict of interest influence government policy at a time when hundreds of businesses closed due to lockdowns?

Besides the pandemic, Ford also supported Prime Minister Justin Trudeau’s illegal use of the Emergencies Act on Freedom Convoy protesters. Ford also declared a provincial state of emergency to remove protesters at the Ambassador Bridge between Windsor, Ontario, and Detroit, Michigan. This included suspending people’s driver’s licenses if they were a part of the protest, seizing people’s vehicles, and arresting without a warrant. At the same time, Ford announced they would be looking to make these measures permanent.

That promise is manifested in the Keeping Ontario Open Act, or Bill 100, which states: “The act establishes prohibitions and enforcement mechanisms to prevent persons from impeding access to, egress from or ordinary use of protected transportation infrastructure.” The enforcement mechanisms include seizing vehicles, revoking driver’s licenses, license plates and license plate permits. The police have the power to remove and seize possession of “objects,” including vehicles. It also grants immunity to police officers enforcing the act. All of these measures can be taken at any time without invoking emergency powers.

Ontario Member of Parliament Rick Nicholls, who was removed from the conservative caucus by Doug Ford for opposing vaccine mandates, has warned that once the law is passed the government can expand the scope and definitions of the act via regulations and declarations. Why would the government need a law to seize private property and possessions without due process? One of the basic doctrines of communism is to attack private property and punish political dissent. The unlawful use of the Emergencies Act demonstrates how these laws can be abused. Bill 100 received royal assent on April 14 and is now the law of the land.

There is also an aggressive push by the Toronto school board to allow students to choose what bathroom and changing room aligns with their chosen gender. True North reported: “[O]fficials at a Toronto District School Board (tdsb) presentation on transphobia last week heard that students should be able to use whichever bathroom ‘best corresponds’ to a student’s gender identity and that parents should not be informed of that identity without the student’s consent. The presentation comes in the wake of a Halton District School Board directive a few months ago stating that students should be able to use whichever change room they feel is ‘most gender affirming,’ and that female students who were uncomfortable with the arrangement should be asked to change elsewhere.” There are also cases of school boards censoring and disciplining teachers who question the content of transgender books.

Ontario is being transformed into a Communist state. The Communist infiltration of Canada began decades ago in education and spread naturally into political leadership. Ontario is seeing the bitter fruits of this prophesied attack on Canada: radical indoctrination in the school systems and Communists on the ballot. (You can read more about this infiltration and how it fits into Bible prophecy in our article “The Communist Conquest of Canada.”)

However, this fulfills another Bible prophecy. Canada is descended from the Israelite tribe of Ephraim, which you can prove by reading The United States and Britain in Prophecy, by Herbert W. Armstrong. God warned Israel that if it rejected His laws and rebelled in sin, it would be cursed with bad laws: “Because they had not executed my judgments, but had despised my statutes, and had polluted my sabbaths, and their eyes were after their fathers’ idols. Wherefore I gave them also statutes that were not good, and judgments whereby they should not live” (Ezekiel 20:24-25). God didn’t give Israel bad laws, but as the New King James and New Living Translations bring out, God gave them up, or over to, bad laws. These man-made laws would actually lead to death, as the Bible says in Proverbs 14:12: “There is a way which seemeth right unto a man, but the end thereof are the ways of death.”

Bills 96 and 100 and the emergency powers are perfect examples of these prophetic principles. These Communist laws are leading Canada to its death as a nation. So what is the main lesson Canadians need to learn? Trumpet editor in chief Gerald Flurry wrote in his article “Two Minutes Closer to Midnight”: “There is no hope in man! There never was and never will be. That is the supreme lesson that God is teaching mankind—the hard way. Every man and woman on Earth must learn that lesson. The sooner we learn it the better!”

That is one of the main lessons of the Bible, and yet mankind’s rebellion requires painful experiences to turn them to God in repentance and to obey those life-giving laws. In God there is endless hope. That is where you can look for real solutions to all of the problems in this world and in your life!

Please read The United States and Britain in Prophecy and The Wonderful World Tomorrow—What It Will Be Like to learn more about the hopeful future.